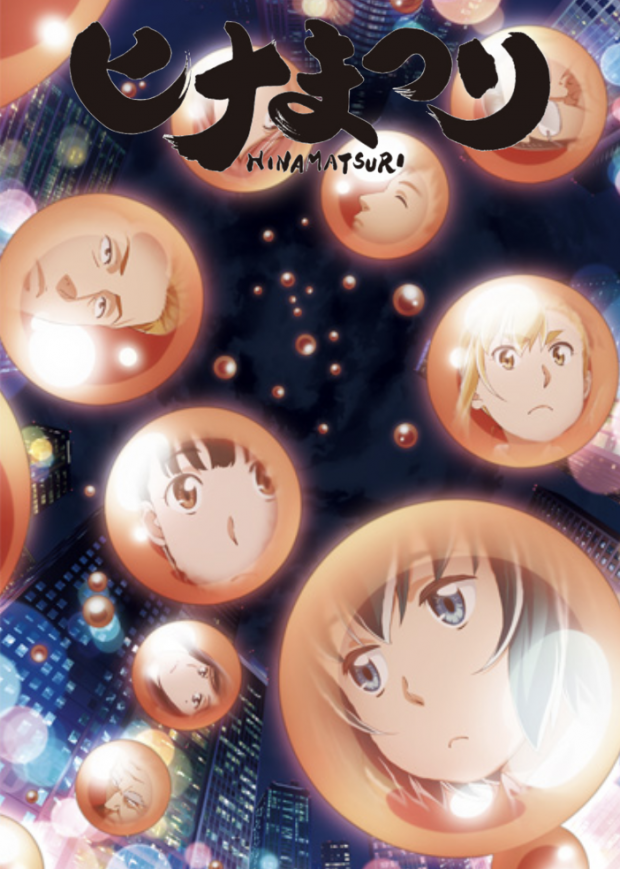 Anime Director Kei Oikawa had his work cut out for him this Spring. Not only was he in charge of helming that runaway hit Uma Musume: Pretty Derby over at P.A. Works, but he also directed another series at Studio feel. (Dagashi Kashi, Outbreak Company) that's itching to achieve its own sort of anime greatness. That show was Hinamatsuri, a supernatural slice-of-life comedy whose premise is very much as out there as you can get. However, what it showcased is the kind of anime that would easily turn a hater of the genre into a true believer.

Based on the manga by Masao Ōtake, Hinamatsuri has a plethora of stories going on at once. For the sake of the readers here, the main focus is the appearance of two psychic-powered girls that land in modern-day Japan: Hina (Takako Tanaka/Brina Palencia) and Anzu (Rie Murakawa/Amanda Lee). Hina appears in the home of Yoshifumi Nitta (Yoshiki Nakajima/Jarrod Greene), a high-rising yakuza who'd rather be hitting the gentleman's club than playing Daddy with the new kid in his life. Meanwhile, Anzu finds herself living in a homeless community, before being brought in by a couple running a Chinese restaurant. 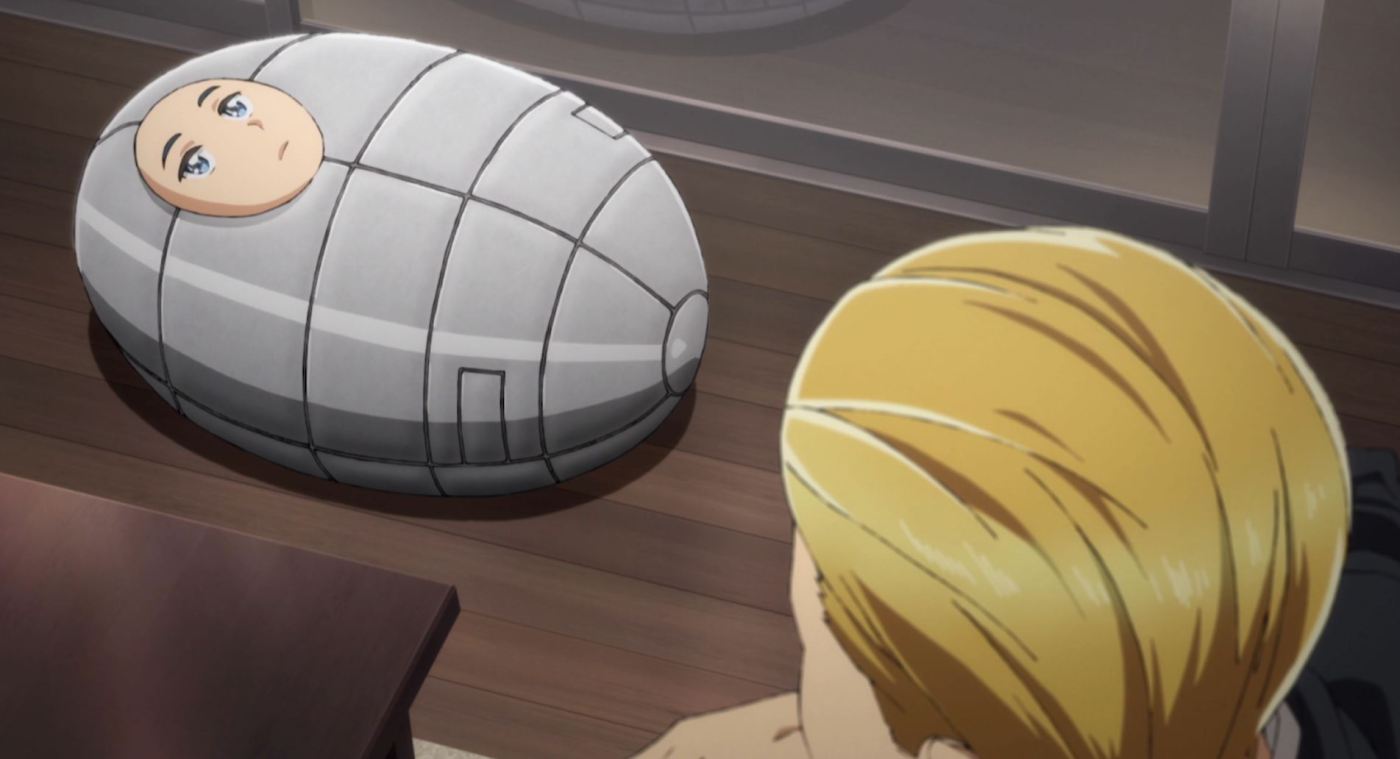 Both Hina and Anzu are polar opposites of one another. The former often lazes about and looks for the easiest of solutions to life's problems; whereas the latter learns about the true value of hard work and perseverance. As they grow into their new settings, they learn about how the world works through various rose-colored glasses, with Hina especially seeing how the yakuza make their bank and gain their notoriety. (Thankfully, it's not as rough and violent as the movies make it seem, as one certain documentarian finds out when filming Nitta for a special.)

Surprisingly, Hinamatsuri puts most of the psychic-based elements of the story in the trunk of the car throughout its run, to the point where it would appear that both Hina and Anzu forget that they have these skills. Instead, they often use their powers for the most random of things, be it tossing trash away or helping an up-and-coming rock band find their niche in a street performance. The reason behind them holding back on their powers -- despite Hina almost destroying Nitta's home for not using said skills -- may be because they don't see them as anything out of the ordinary. Rather, these two characters would rather try being regular humans, as they find living in a world where they aren't constantly given orders is quite a nice change of pace for them. 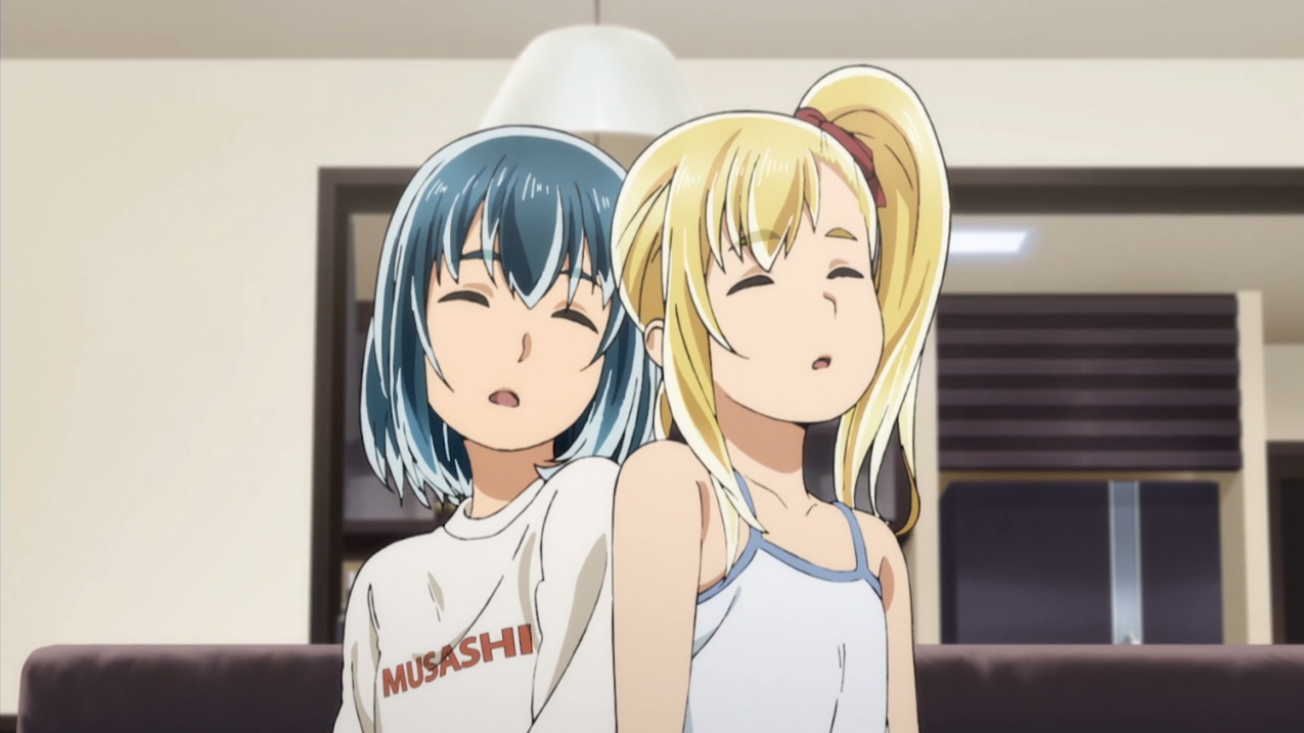 Instead, this anime decides to demonstrate how these two girls would react to the both the simplest and toughest things living on Earth. Having no place to go, being forced to steal to eat, learning lessons on how to survive without a roof over their heads, and even the value of a yen. The difference is where Hina and Anzu are being raised, with Hina practically living the life of a yakuza’s luxury and Anzu the life of poverty. Because of this, both have quite the different perspectives of the world around them.

And that’s where some of Hinamatsuri’s biggest lessons are drawn from. We see how Hina takes advantage of being given free education by sleeping through class, whereas Anzu scrounges hundreds of cans a day for only a small financial takeaway in the end. One cannot value anything if it costs nothing (Hina), and another can deliver gratitude to everything because she has nothing (Anzu). In a way, it’s quite the character study to see how two people of similar backgrounds can perceive their surroundings just by where they find themselves laying their hats in the world. 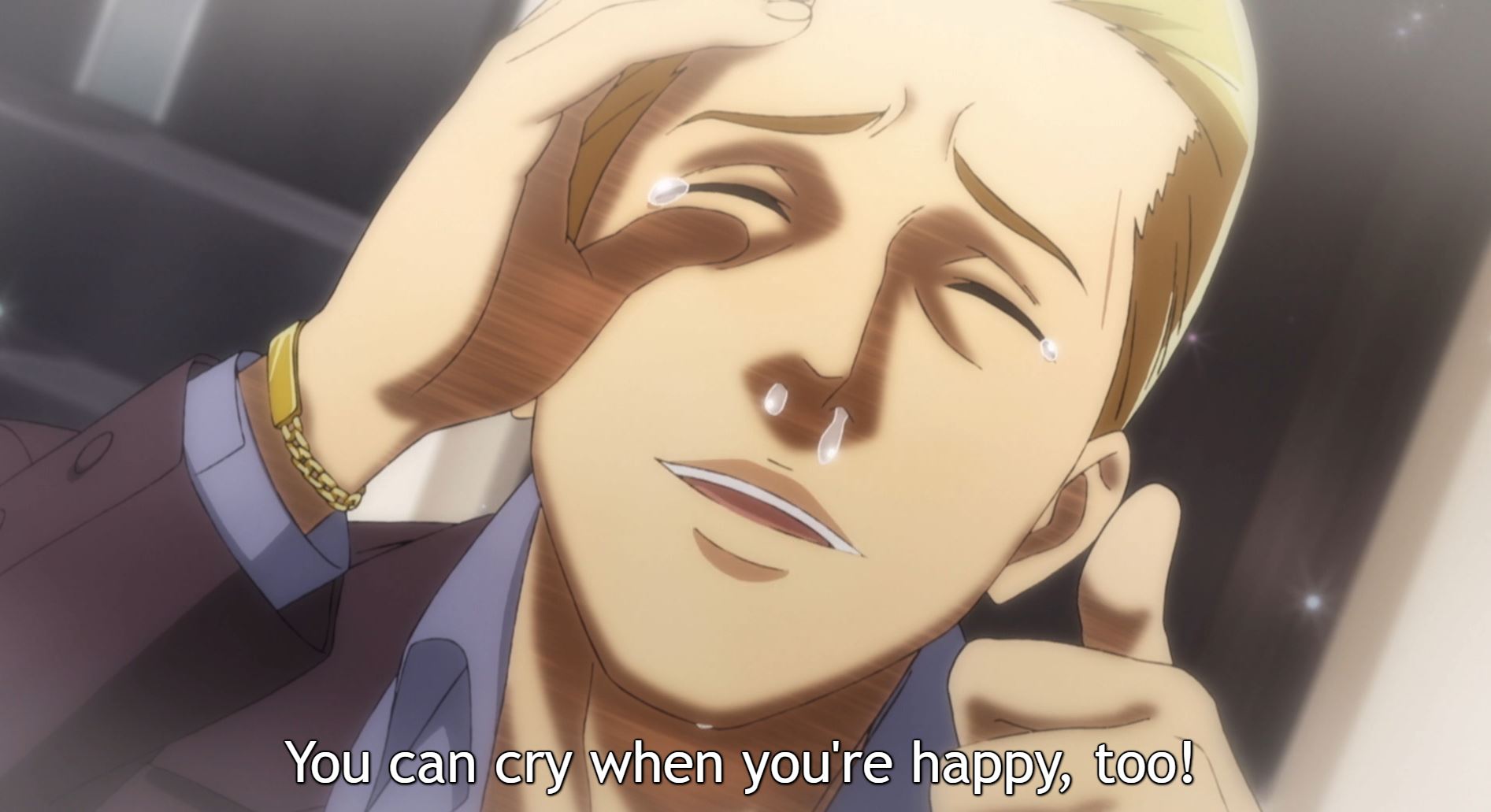 Of course, these lessons don’t take away from the fact that this anime is rip-roaringly hilarious in a multitude of ways. Hina’s laziness and deadpan personality manages to pull out some unexpected laughs, be it with her meeting Nitta’s family or running for student council president for the sake of more naps in class. Anzu rarely finds herself in as many joke-y situations as Hina, but watching her new surrogate parents bawling their eyes out every time she says something noble is pretty funny. And yet, the real laughs come from Hina’s fellow classmate Hitomi Mishima (Kaede Hondo/Tabitha Ray).

Hitomi is your goody-two-shoes sort of student, with the ability to take on just about every task that’s handed to her. Because of this (and due to her association with Hina), she finds herself working as a bartender and taking on various odd jobs throughout the series. And when she gets caught in the act by her fellow students and her mom, the look on her face is what you can consider truly astonishing. Even funnier is the fact that one of her teacher’s is a regular at her bar, and can’t seem to tell that that’s his own student working behind the counter. Trust me when I say that once the spotlight is shone on Hitomi, she runs away with it with the greatest of ease. 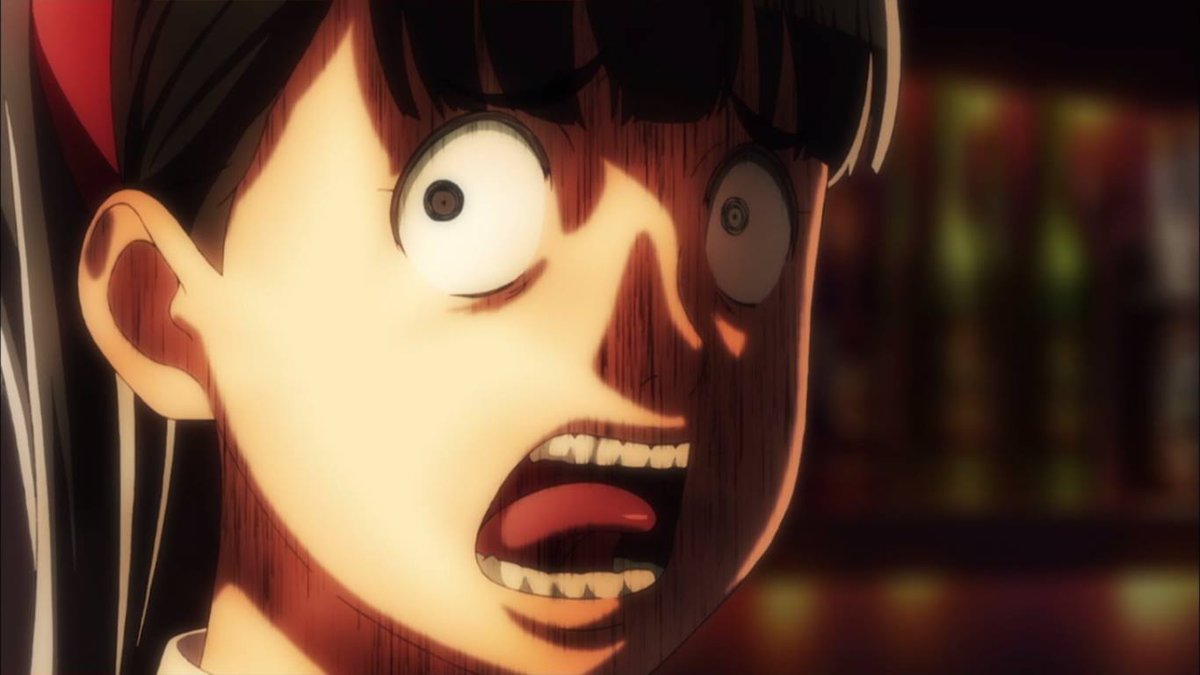 Equally as funny is whenever Nitta is placed in a curious situation. Whether he’s finding himself in a cement barrel due to a misunderstanding or prepping for a date with bartender Utako (Yoko Hikasa/Mallorie Rodak), the run of bad luck he finds himself in could be considered curse-related. The pairing of Nitta and Hina makes them such the odd father/daughter combo, but their relationship takes them on many laugh-filled roads. Even when Hina takes on a hit for Nitta’s sake so he won’t die in the line of fire, the punchline that’s delivered is on such a high and visual scale that you can’t decide whether to laugh or deliver an action-filled fist-pump.

The strengths of feel.’s animation alone is presented amazingly, be it a quiet scenic setting by the riverside bridge or showcasing an impromptu rock concert with Hina showing off her psychic powers for a quick buck. Like KonoSuba though, the real icing on this cake is the facial expressions of the characters on the show. Never have I seen an anime that blends cartoony reactions with realism in the ways this show does. (I swear, you can count how many teeth are in Hitomi’s mouth at times, it’s that detailed!) 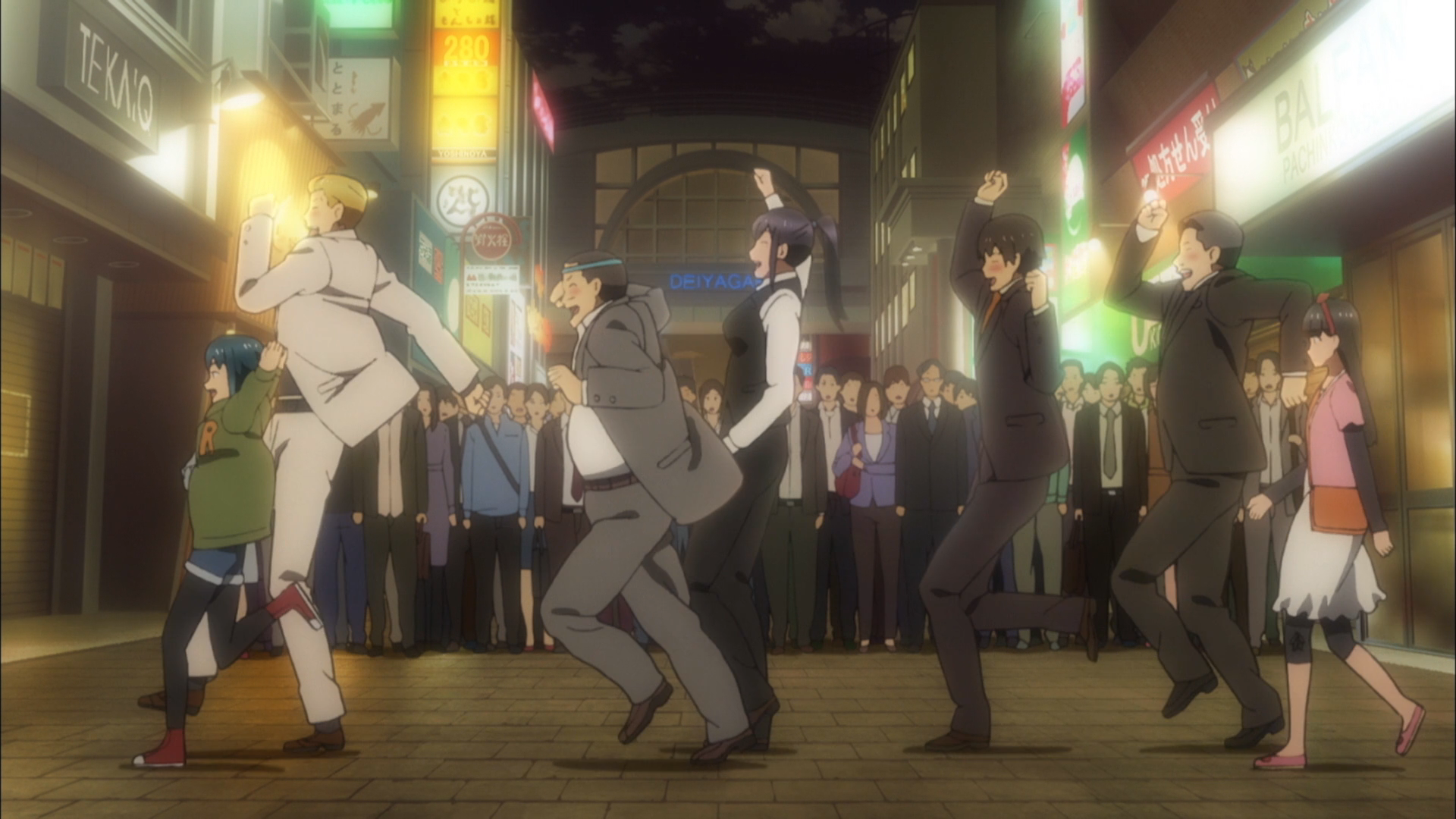 Whether you watch it in English or Japanese, the voice cast in Hinamatsuri is pitch-perfect. You can enjoy both Tanaka and Palencia’s deadpan delivery as Hina as it’s paired with Nakajima and Greene’s tough guy Nitta, with both versions showcasing a lot of great vocal chemistry and fantastic straight man/stooge delivery. Murakami and Lee showcase a great humanistic performance to Anzu, especially when it comes to showing off the true heart of the series. However, it’s the adorableness of Hondo and Ray’s portrayal of Hitomi that makes even the most roughest of patches she has to go through all the more funnier.

Yasuhiro Misawa (Gabriel DropOut, Himouto! Umaru-chan) crafts a soundtrack that plays to both the more action-y aspects of the anime with the more mundane parts of the characters’ lives. Opening theme “Distance” by Rie Murakawa is a bouncy, uplifting song that plays to the more happier elements of the series. Meanwhile, Nitta’s Japanese voice actor Nakajima takes the reins for the end theme “Sake to Ikura to 893 to Musume”, a song that sounds exactly like something you’d find in a Yakuza karaoke mini-game. It’s swoon-inducing, but extra funny for the sake of hearing a tough guy crooning his heart out.

Hinamatsuri demonstrates how to deliver both gut-busting comedy and heart-wrenching character development in one fell swoop. Laugh at all the dumb stuff that occurs, and then be bewildered as teardrops fall from your eyes while a sweeter moment plays before you. Not since The Troubled Life of Miss Kotoura have we seen such a perfect blend of thought-provoking drama and top-tiered comedy in the anime realm. As priceless as one of Nitta's vases, Hinamatsuri is one series that is destined to be treasured for many years to come.

Hinamatsuri can be viewed on Crunchyroll, FunimationNOW, and VRV. It has been licensed by Funimation. Episodes 1-12 were observed for this review. Promotional consideration provided by Crunchyroll and VRV.