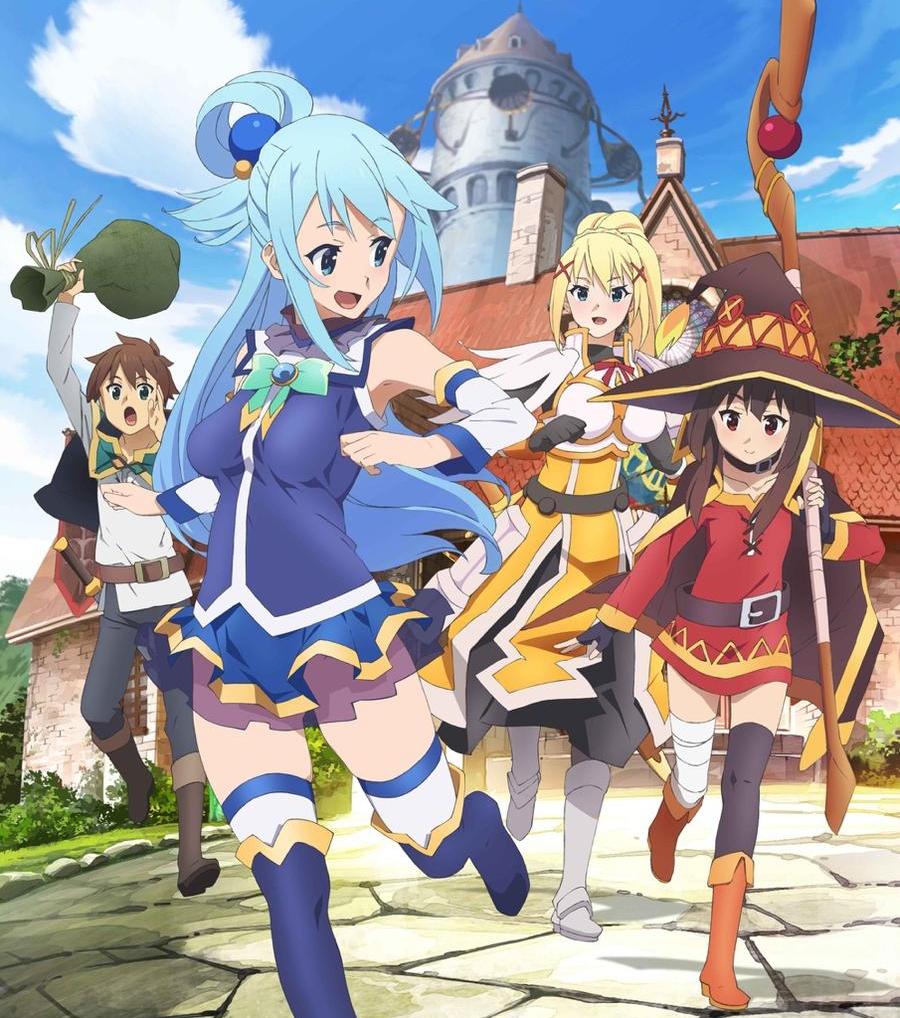 If the realm of British comedy has taught me one thing, it's that any scenario can be ten times more hilarious if every character is a complete and utter dick. Shows like Bottom, The I.T. Crowd, and Father Ted relished on the fact that their people were the biggest jerks on the planet, with the series that did it the very best being Rowan Atkinson's beloved Blackadder. Him, Baldrick, Queen Elizabeth, and Prince Regent were the biggest assholes the television world had ever seen, and to see them acting like pricks in such a Renaissance-y backdrop made their antics all the more fun.

Which leads me to this season's anime comedy KonoSuba: God's blessing on this wonderful world!! Taking a cue from this British comedy rule book the series' main focus falls on a group of downtrodden jerks who are out to make a living via hacking, slashing, and blowing stuff up. Take note, United Kingdom: KonoSuba shows you how to recapture this silly, albeit downright nasty magic that Blackadder once brought to TV sets everywhere. 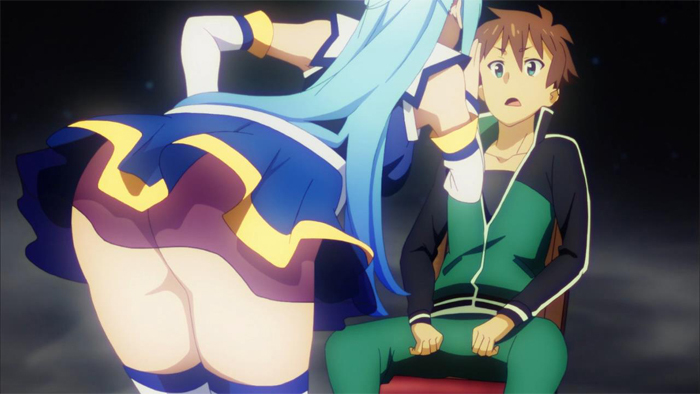 Based on Natsume Akatsuki's novel series, KonoSuba follows Kazuma Satou (Jun Fukushima), a NEET otaku who has become a shut-in after being left with a broken heart. While walking home from a big game purchase he sees a vehicle about to hit a young girl, and without thinking he pushes her aside, sacrificing his life so another can live...or so he thought. Enter the goddess Aqua (Sora Amamiya), who informs Kazuma that he has died in the most embarrassing way.

Finally catching her breath from laughing too much, the goddess explains that Kazuma can either be sent to Heaven (which is apparently a really boring place to be) or be transported to a world with the same elements as your run-of-the-mill MMORPG where he has to defeat the Devil King. While still being irritating Aqua informs Kazuma that he can bring just one thing to the new world. In a fit of angst and revenge Kazuma chooses that one item: Aqua, who soon finds herself freaking out at her new surroundings. 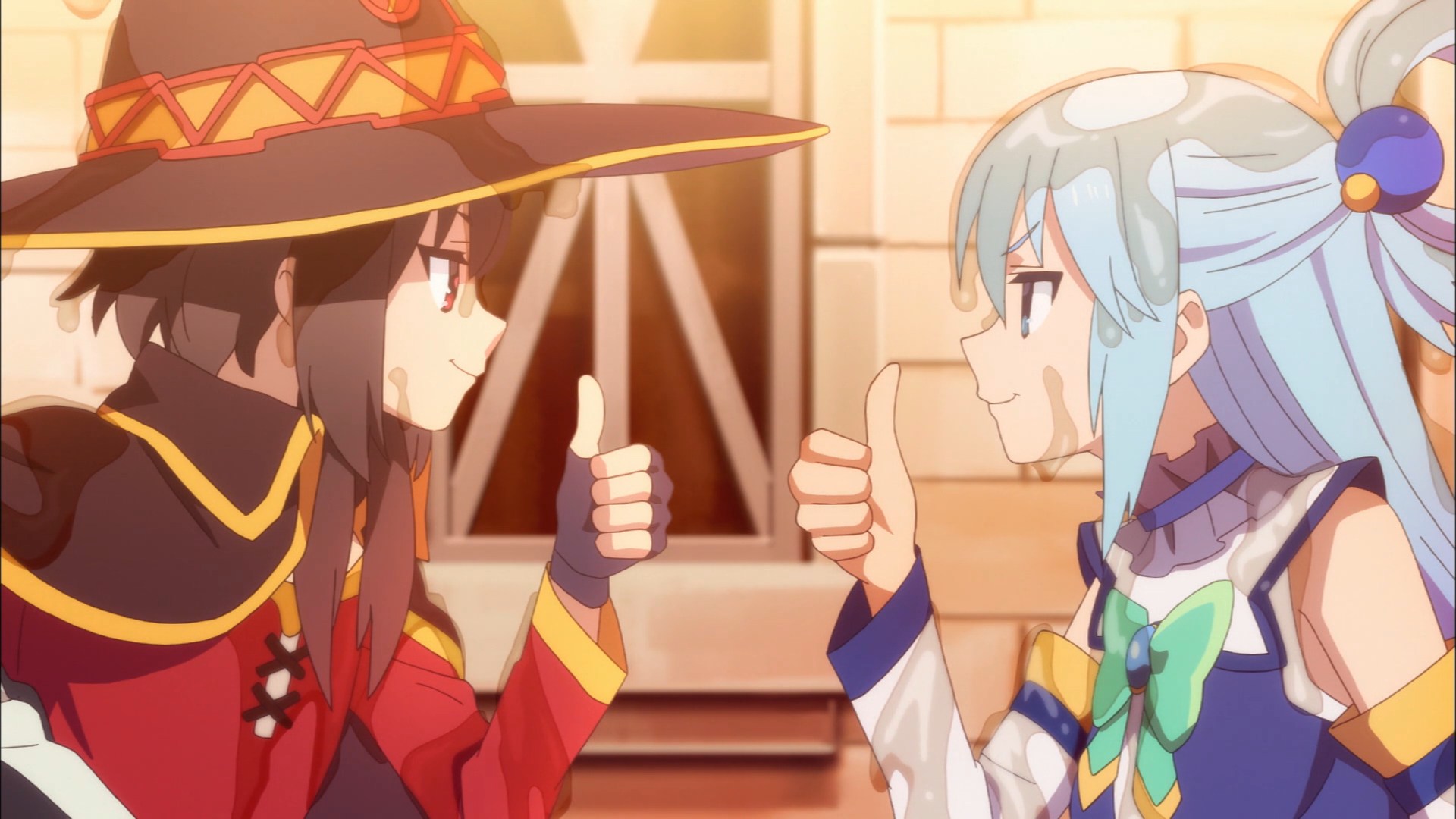 Once settled into the town of Axel, Kazuma and Aqua are assigned their classes, the former given the lowly Adventurer and the latter the high-marked Archpriest. However as a duo can barely ever get a job done (as evident by their task of eliminating giant magic frogs) the newcomers of the land reluctantly bring in two other folks into the party: the Magician Megumin (Rie Takahashi) and the Crusader Darkness (Ai Kayano). Of course with their sheer luck these two newcomers have their own quirks to work out.

KonoSuba is an anime about dicks on an adventure, and nothing is funnier than watching them get their just desserts. During the frog mission Aqua begins taunting Kazuma for failing to defeat just one of them, only for her to become a tasty treat for the giant amphibian. Megumin -- who will ONLY do Explosion magic despite it wiping her out after one spell -- likes to put Kazuma into predicaments that either wind up making him look like the pervert that he truly is or forcing him to empty his wallet for her stomach. Meanwhile Darkness is a pure masochist, loving every attack laid upon her and making her opponents feeling way uncomfortable. 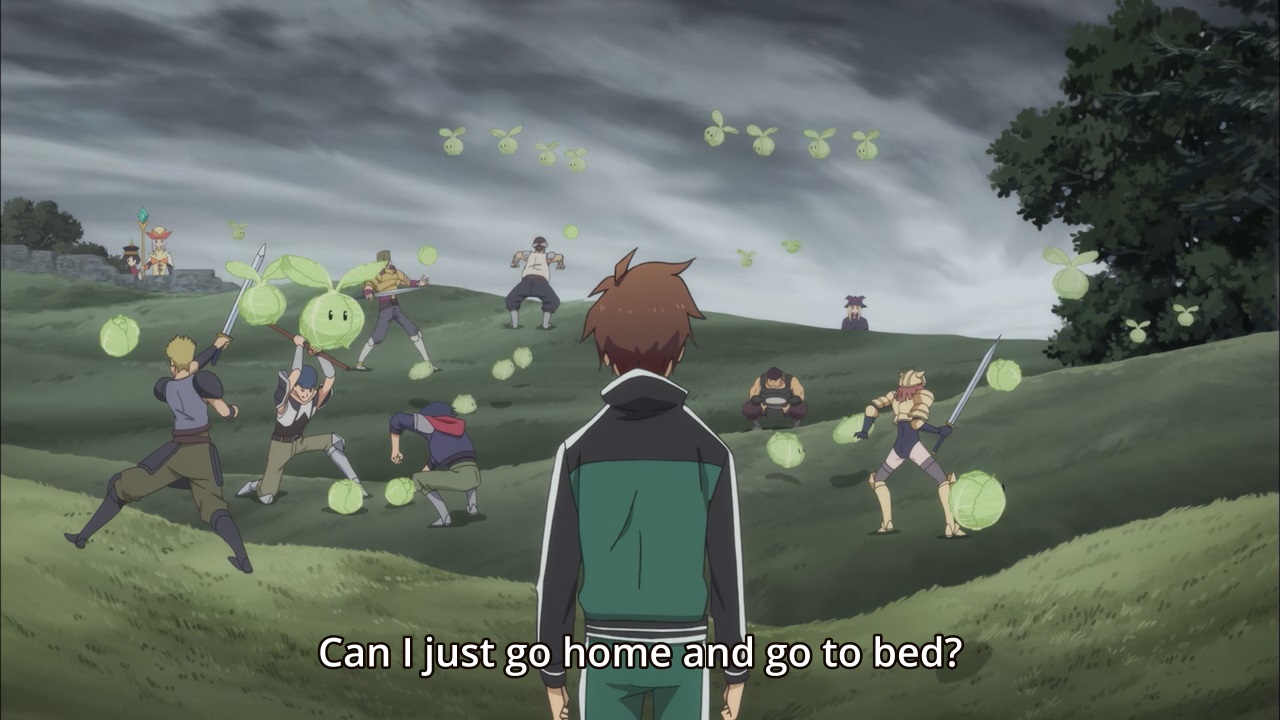 As for Kazuma himself, if he's not arguing with Aqua then he's learning some new tricks that may make the average person blush. While being taught the Steal technique from Darkness's friend Chris he winds up taking her panties, and in a true laugh-out-loud moment he finds that doing something as simple as this can get him just about anything he desires. One of the funnier moments involves the quickest Renaissance match in anime history, where Kazuma steals a mighty sword from a pompous warrior -- also sent there by Aqua -- and doing something to it that would make even the mightiest of knights jump into a fit of panicked frenzy.

It's really hard to talk about KonoSuba without spoiling some of the better bits it has to offer, and believe me when I say that the show is filled to the brim with them. Unlike something like Is It Wrong To Try To Pick Up Girls In A Dungeon?, the series just plays for straight-up laughs with barely a sign of anything really serious ever happening. A great example of this involves the entrance of the dullahan Verdia (Hiroki Yasumoto), whose presence starts off feeling like a threat not just to the four jerk heroes, but to the town of Axel. However once he starts to open up his mouth you'll find that he has quite a lot in common with a certain knight from that famous Monty Python movie. 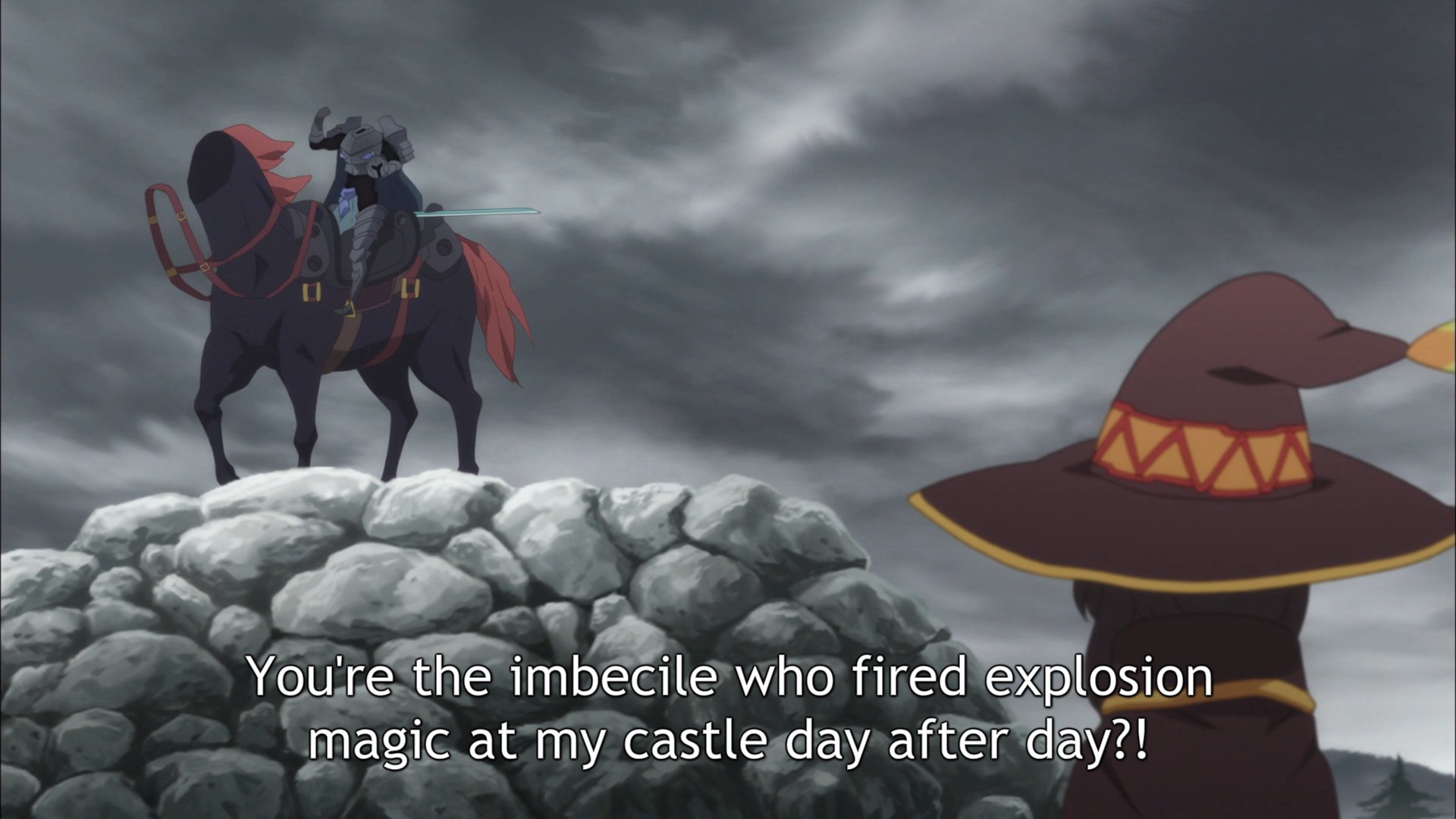 The comedy works for two reasons. For one Studio Deen has presented a robust world with some exaggeratedly pathetic characters. There is a lot of beautiful detail in the buildings, the pub, and even that possibly smelly stable that Kazuma and Aqua are forced to sleep in for the majority of the series. The characters meanwhile can either look beautifully drawn or ridiculously obtuse, with the latter occurring when the group is in the most danger. (Seeing Aqua turning into a blob-ish mess as she's being attacked by giant gators during a purification quest is a prime example of how the animation style can get ridiculously crazy, but in a way that helps with the comedy.)

The other reason the humor gels is because of the voice cast. Fukushima plays Kazuma with the same snarky flair as one of Hugh Laurie's early roles. He's a prick, but you wanna root for him to succeed despite his worst intentions. Acting as the Stephen Fry in the group, Amamiya's Aqua is all high-and-mighty until she finds herself broke and in a heap of trouble. She whines, bitches, and mopes when things don't go her way, and it's all the more funny when that hole she's in gets deeper and deeper. Takahashi is simply adorable as Megumin, with the right amount of stubbornness that makes her mentality all the more enjoyable to watch. Hearing Kayano jump between noble fearless warrior and kinky freak as Darkness is a pure riot, with her mannerisms making even the Devil King's minions feeling rather tense. 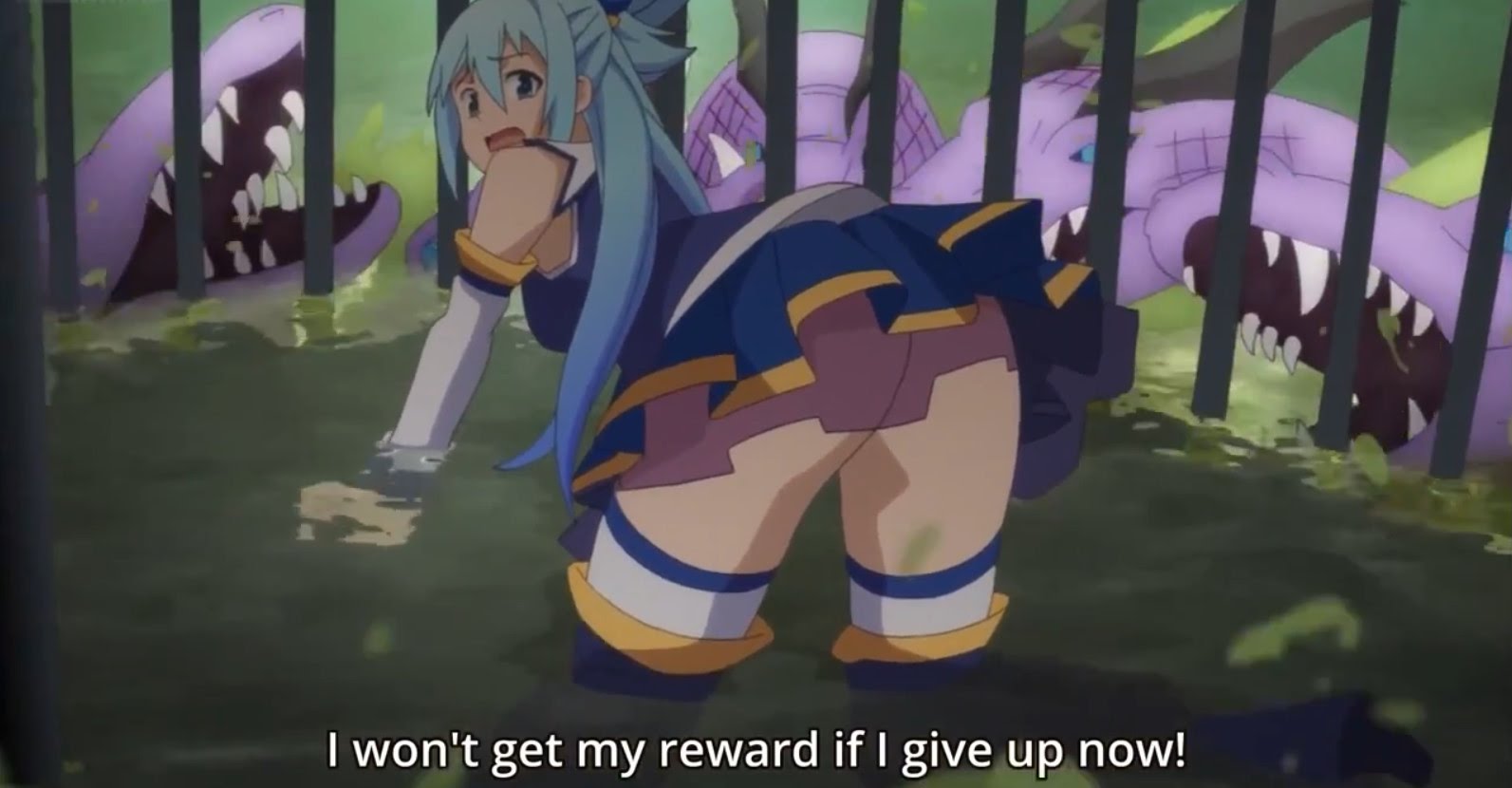 A special mention has to go to the anime’s score composer Masato Koda, who was able to bring forth a musical blanket that perfectly snuggles in the comedy and action that takes place on the scene. Machico’s opening theme “fantastic dreamer” sets the viewer up for the happy-go-not-so-lucky adventure that you’ll be seeing Kazuma and the rest of the crew partake in, nicely fitting with the series’ comedic attitude. And for once, I’m glad a show that takes place in the olden days has a folk song as an end theme instead of some modern pop track. "Chiisana Bōkensha,” performed by Amamiya, Takahashi, and Kayano, is soft and nimble as the grassy hills of Ireland with the tone of calm summer’s day in the country.

KonoSuba: God's blessing on this wonderful world!! is how you do Renaissance comedy right, in the same way the likes of Blackadder, Galavant, and even Robin Hood: Men In Tights achieved. (The less we say of Your Highness, the better.) If there is a shred of necessity in your heart that is in need of a good laugh, then prepare yourself for all the great gags, perverted humor, and slapstick violence your body can handle. Just be wary of those cabbage monsters.

KonoSuba: God's blessing on this wonderful world!! can be viewed on Crunchyroll. Episodes 1-8 were observed for this review.