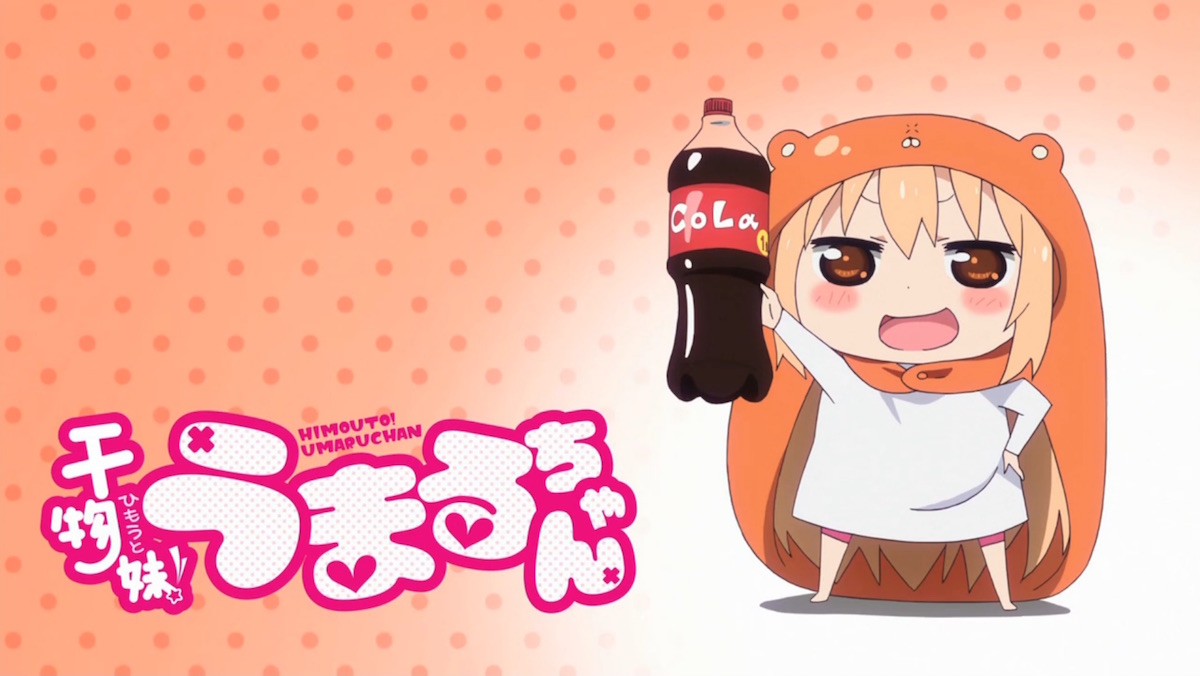 Summer is sadly coming to a close. Farewell nature walks, adieu to poolside cookouts, and sayonara to cute girls in even cuter bikinis. The summer of 2015 has brought us many new anime series, the majority of which were -- in fact -- pretty good. In fact I can't think of one show I watched that was even remotely disappointing, a rarity in any vast entertainment industry. However when I look back at this season of anime it won't be monster girls, S.O.X., or even high-octaned BB-gun battles that I will fondly remember.

Nay, this summer's greatest contribution to anime resides in a show that embodies the summer spirit. A time to relax, to be a little lazy, and do whatever you want in your spare time as you snack on no-named potato chips and guzzle off-brand cola. This summer's hero of anime stands proudly with her handheld game system in hand, as her hamster hoodie blows in the mightiest winds of hilarity. As you may have guessed, Summer 2015 easily belongs to the queen of the slackers: Himouto! Umaru-chan. 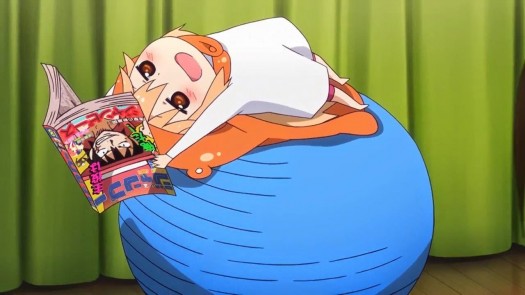 Himouto! Umaru-chan's premise is rather simple: the story of a high school girl who is not all that she seems to be in the privacy of her home. In normal instances this would lead to the main protagonist being something like a spy, or -- in rare occurances -- a psychopathic killer. Instead our main focus of the show, the beautiful and intelligent Umaru Doma (Aimi Tanaka), is secretly one of the laziest slobs to currently reside in Japan. Living with her brother Taihei (Kenji Nojima) Umaru spends her luxury time eating junk food, reading manga, playing video games, and watching anime.

This, dear readers, is the anime in a nutshell. There's no underlying storyline, no physical threat to Umaru or the rest of Japan, and nothing really progressive about this series. So why then is a show like this the perfect companion for a summer vacation? It's simple, really: it's the type of anime that lets your brain take a break with the rest of your body, while at the same time be incredibly funny without dipping down to Adam Sandler levels of stupidity. You can watch Himouto! Umaru-chan, and walk away from it knowing that your own intelligence wasn't affected in the process. 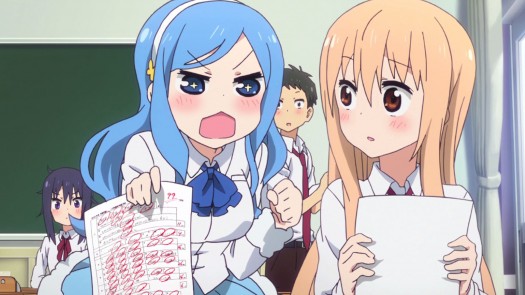 Watching Umaru transform from anime girl perfection to chibi-sized louse is what truly makes the show fun. In a blink of an eye she will go from the top-tiered student of everyone's admiration to the epitome of lazy. How she hides this persona from her friend Ebina (Akari Kageyama) as they tread the malls for their own personal needs -- Ebina for clothes, Umaru for video games -- gets you wanting our series' focus to be caught geeking it out in the open. Of course for situations like this Umaru will go under the masked persona UMR, as she befriends her so-called rival Sylphynford Tachibana (Yurina Furuwaka), whose appearance behind epically fake backgrounds and a showering of blossom petals almost steals the spotlight from our little hamster aficionado.

There's a moment where Umaru nearly gets caught in the act, as classmate Kirie Motoba (Haruka Shiraishi) discovers her in chibi form. However as she is an incredibly different person in her home the classmate believes this hamster-donned person is Umaru's little sister, which our show's focus quickly runs with. To see Motoba react so shyly to Umaru in school and then so clingy and attentive to "Komaru" is what makes Himouto! Umaru-chan utterly joyful. How people's personalities change depending on the situation at hand (i.e. being around someone you like, taking part in a competition, having the house to one's self) is what makes this anime not only a blast to view, but also somewhat relatable. 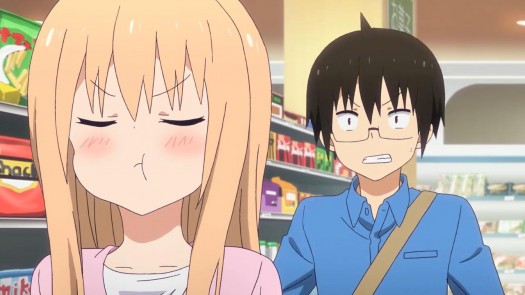 It's hard to feel bad for Taihei in this anime. This is a character that has a nearly 12-hour work day, and then is expected to cook dinner and tend to Umaru's every crazy need. Sometimes he gets his way via some enormous guilt-tripping, but for the most part Umaru finds a way to keep on lazying about. A small part of you wants Taihei to get more of a break from Umaru's sloth ways, and yet every time you look at either her chibi form or normal appearance you get a "she's too adorable to stay mad at" vibe flung straight into your heart. That, in my opinion, is the epitome of cutesy evil!

The secret behind the success of this anime lies with two people: director Masahiko Ohta and series composer Takashi Aoshima, both of whom brought clever hilarity and loads of heart in The Troubled Life of Miss Kotoura and the criminally-underrated Love Lab. While nothing too serious happens in Himouto! Umaru-chan, Ohta and Aoshima still are able to toss in a fair amount of warmness into every episode. Sure, there may be no signs of isolation from the main heroine, nor do we have any characters holding onto secrets that may harm their newfound friendships, but a show lacking any sort of tension is exactly what a summer vacation would order. (Trust me when I say that if you see Ohta and Aoshima's names attached to a project, you will surely be in for an anime treat.) 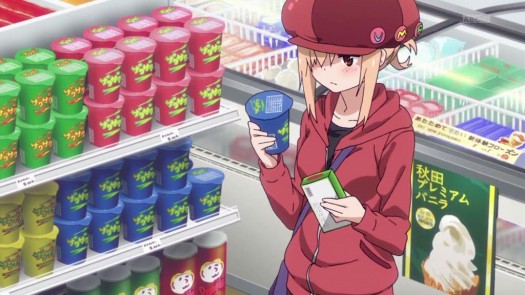 It's also good to see this talented duo team up once again with animation studio Dogakobo, who not only helped with bringing that personable attitude to Love Lab but also ran away with one of last year's best comedies Monthly Girls' Nozaki-kun. Here Dogakobo shows why comedy is their strongest suit to animate, as the visual gags with Umaru and the cast emphasize the show's silliness to another level. Not to mention, how they "transform" Umaru back-and-forth between top student and lazy good-for-nothing is as wonderfully funny as it is adorable.

How Tanaka can switch between personalities as Umaru is wonderful to the ears. One moment she's the embodiment of what every student aspires to be: smart, kindhearted, and outgoing, all of which are presented well in the voice actress's performance. It's when Umaru flings on the hamster hoodie and go full-blown brat when Tanaka cranks the performance to near-Shin-chan levels of insanity. Whatever awards show exists for seiyuu in Japan, she definitely deserves a win in the comedy category. 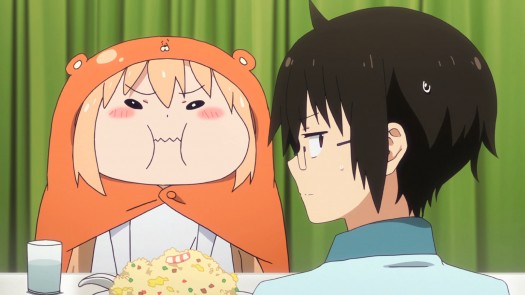 This doesn't take anything away from the rest of the cast, as Nojima plays Taihei with the perfect straight man approach to Umaru's punchline-inducing personality. As Ebina, Kageyama is fun to hear in her shyest mode, but it's when she gets flustered via a compliment from Taihei when her personality reaches an adorable lovey-dovey capacity. Shiraishi also does a fine job balancing two different mentalities as Motoba, with her nervousness in full gear when she's around Umaru and then flipping the switch to goofy clinginess when hanging out with "Komaru". Lastly Furuwaka's Sylphynford is everything a frienemy should be in a series, sounding over-confident when in competition and nicely down-to-earth when she's hanging out with UMR.

Every time Tanaka's opening theme "Kakushin-teki Metamorphosis!" hits your ears, you instantly know you're ready to have a good time watching Himouto! Umaru-chan. As images of Umaru having a samba party and roaming with an army of hamsters smack your eyeballs the song hits all the right notes to be off-the-wall fun, catchy, and the kind of earworm you don't ever want to pluck from your brain. End theme "Hidamari Days," performed by the main female cast, is the perfect way to calm down from all the sillies one will bear witness to. It's poppy, melodious, and it brings you back to reality in a softly manner.

As the final summer days approach and this current TV season comes to a close, there will be many looking back at Himouto! Umaru-chan as the true runaway hit in the anime realm. And who can blame them? It's a brainless comedy that doesn't make you feel dumb after watching it, with characters that are both enjoyable to watch and -- in odd cases -- relatable. Simply put: it's the perfect anime to pair with the much-needed summer break. With fall now approaching and regular life going back into full gear, anime fans will look to Himouto! Umaru-chan and be thankful that such a show gave them everything a summer TV series needs to be: pure, unadulterated fun!

Himouto! Umaru-chan can be viewed on Crunchyroll, The Anime Network, and Hulu. It has been licensed by Sentai Filmworks. Episodes 1-9 were observed for this review.

GAME REVIEW | Once More, With Feel...