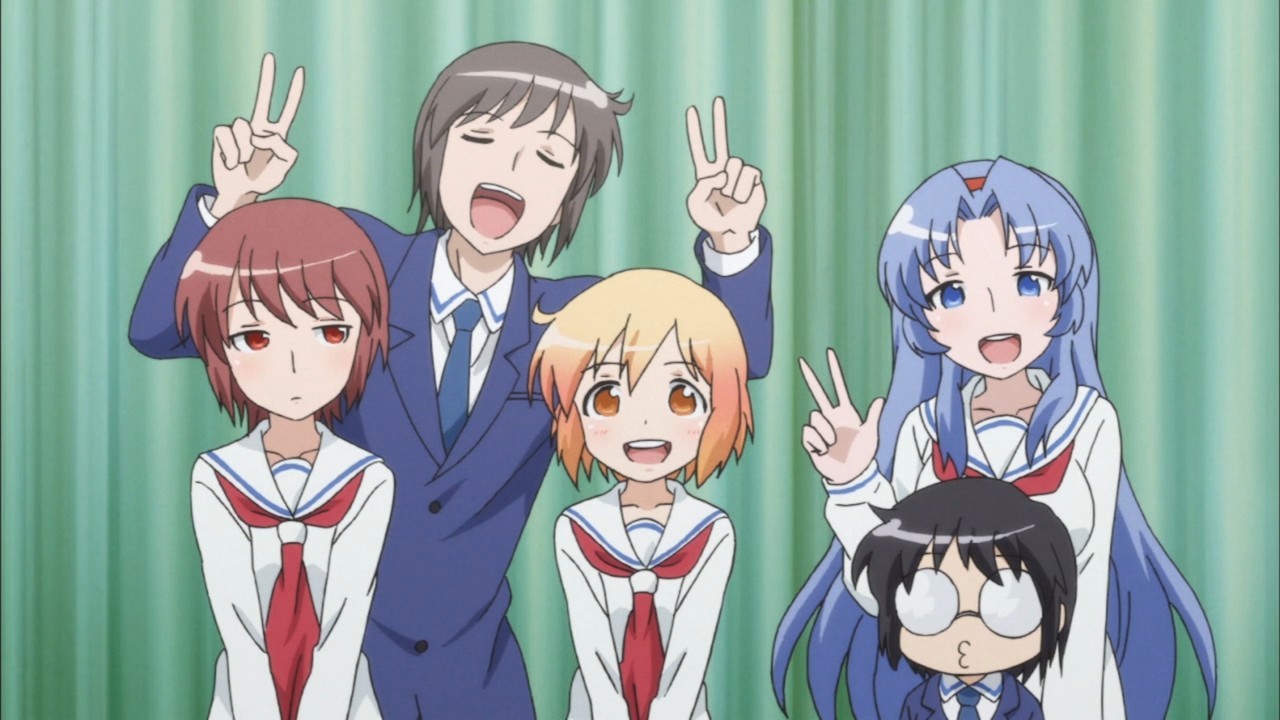 It's not often that a series -- anime or not -- can balance comedy and drama to both extremes. Sometimes when a comedy tries to act serious, it seems forced; when a drama tries to go for a laugh it can at times feel either inappropriate or out of place. To be able to wear both masks comfortably one must excel at bringing light-hearted laughter mixed with some of the darkest aspects a less fortunate person must face on a near-daily basis.

And that's exactly what The Troubled Life of Miss Kotoura was able to pull off, bringing not just some of the most heart-wrenching moments in anime but also some of the funniest.

Originally airing in 2013 The Troubled Life of Miss Kotoura follows Haruka Kotoura, a young girl who has the strange ability to read minds. Because of this special power she unwittingly pushes her friends away, breaks her family apart, and finds herself under the care of her grandpa after her mother pushes her away and says the worst thing a parent could tell their child. All alone in the world Kotoura tries to get by in her daily life, as almost everyone around her shuns her very existence. After transferring into a new school our young protagonist feels a bit of deja vu with her new classmates, who are already thinking the worst of her. 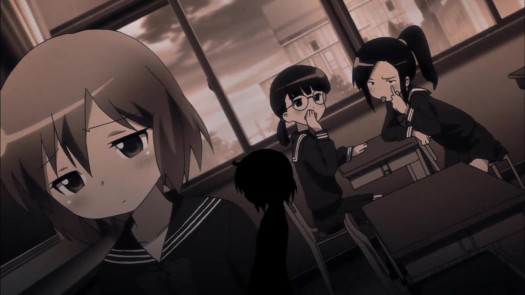 As any redeeming chance seems to have faded, she comes across Yoshihisa Manabe, a perverted student that winds up being the first sane person to enter Kotoura's life. Soon her attitude begins to change for the better, as she becomes a member of the ESP Research Society that's fronted by the dwarfed student Daichi Muroto and Yuriko Mifune, the daughter of a popular medium who committed suicide when she was just a child. A short -- and somewhat brutal -- rivalry comes in the form of Hiyori Moritani, a dojo successor who secretly loves Manabe but soon finds herself a place in their club. However the more life becomes a positive experience for Kotoura, the more her past continues to haunt her.

What makes Miss Kotoura so engaging to watch is how the comedy and drama balance each other out in such an even ebb and flow. One moment your heart aches as Kotoura attempts to isolate herself from making friends, fearing her powers may hurt others more than the pain of being alone. The very next moment Manabe hilariously fantasizes about the young mind-reader and leaves her feeling very embarrassed. On paper it sounds out of place, but believe me when I say the quick emotional change works like magic. (Put simply: this anime was pulling a Rick & Morty months before anyone knew was a Meeseeks Box was.) 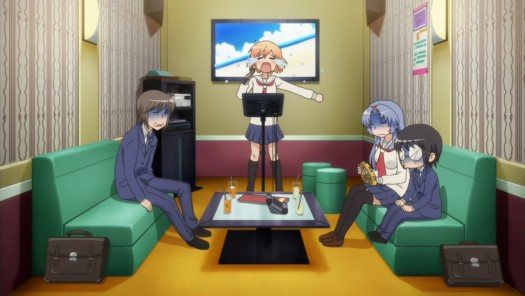 The cast of Miss Kotoura easily make the characters both likable and relatable. Hisako Kanemoto (Squid Girl, Gargantia on the Verdurous Planet) plays the title character both with fine comedic and tragic timing, pulling off some good laughs and getting some well-deserved tears for the sadder moments in the show. As Manabe, Jun Fukushima (D.N.Angel, Yowamushi Pedal) brings the comic relief levels to an ultimate high, leaving room for some heartfelt moments with the rest of the cast. Yurika Kubo (Love Live!, The "Hentai" Prince and the Stony Cat) starts off a great villain as Hiyori, but once she befriends Kotoura she becomes another humorous source of comedic fodder. Kana Hanazawa (Psycho Pass, Mekakucity Actors) and Hiro Shimono (The World God Only Knows, Attack on Titan) deliver a terrific pairing as Mifune and Muroto, who not only showcase a strong bond with one another, but also the sort of trust that rarely is seen these days within an anime series.

Of course all of this character development is thanks to the clever scriptwriting from Takashio Aoshima, who webs together the emotions of joy, anger, sadness, embarrassment, and curiosity into one nicely-tuned show. Director Masahiko Ohta also deserves some praise for not only getting the best emotion from the cast, but some of the brightest and detailed animation done by AIC Classic. (Ohta and Aoshima have also worked together on Love Lab, YURIYURI, and Minami-Ke, showing that the duo is quite the comfortable collaboration to wrangle up.) 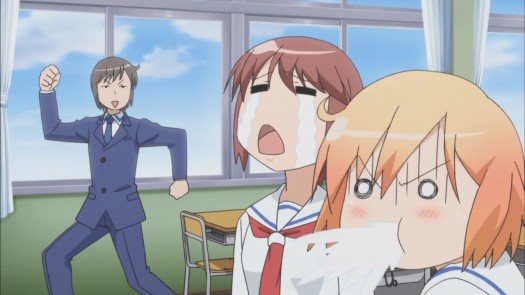 Yasuhiro Misawa (Kokoro Connect, Himotou! Umaru-chan) takes a cue from Aoshima and brings together a score that blends well with both the tragic and comedic aspects of the series. Bookending the series are two songs that also mesh nicely with the mood of the anime: the cheery "So That's the Other Side of the Other Side of the Story, Right?" by Megumi Nakajima and Haruka Chisuga's sadder -- albeit uplifting -- "Flowers of Hope." Special points for Kanemoto's hilarious in-character "Tsurupeta" track, an anthem for the flat-chested population if there ever was one.

Initially I was sad to see The Troubled Life of Miss Kotoura only have a 12-episode run, as it had so much more potential within its overall storyline. After a three-episode arc involving a mysterious attacker the show decides to end, precisely at a point where Kotoura's powers are really starting to be used for some good. It's unfortunate viewers won't be able to see what other good deeds she could attempt to do with her mind-reading skills. (Those who are interested in seeing more adventures of Kotoura can read enokids's original manga, available in the states via eManga.) 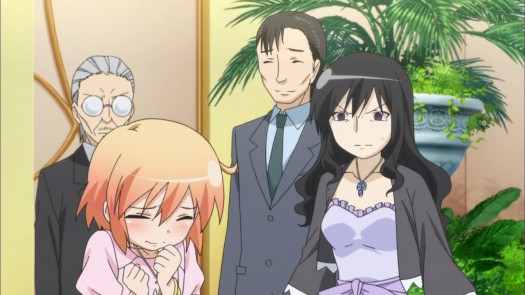 And yet, I cannot think of another anime in recent memory that ended things as perfectly as Miss Kotoura has! Without giving anything away the final episode leads to a confrontation that's been building up since the first time we meet Kotoura, and it goes down in the way I'm sure many viewers would want it to. Granted a certain person may be getting off a bit too easy here, but any loose end that may have been discovered throughout the series run does get tied up as tightly as Muroto after pulling a horrid prank on Kotoura.

The Blu-Rays have a fair amount of Extras to view. Included are the credits-free opening and closing animations (which contains five versions of the OP that looked exactly the same as one another), some short clips of a Kotoura plushie visiting the city of Tottori, Japan, and an interview segment called "Haruka's Room," where the mind-reader interviews some of her fellow ESP Research Society members. (An episode where Kotoura interviews herself is more funnier than it should be.) The icing of these extras is a small booklet called "Miss Kotoura's ESP Handbook," which features character sketches, cast & crew interviews, trivia about each episode, and bonus comics.

The Troubled Life of Miss Kotoura is not just a great anime, it's also one of the best written shows to peer its head out of the pop culture realm. Every joke and visual gag works, every dramatic turn of events hits its mark, and the cast and crew that made this show happen seemingly worked effortlessly to bring to life a truly memorable series. This is one show that deserves a spot in anyone's collection, as it serves as a pinnacle to what a dramatic comedy can truly achieve.