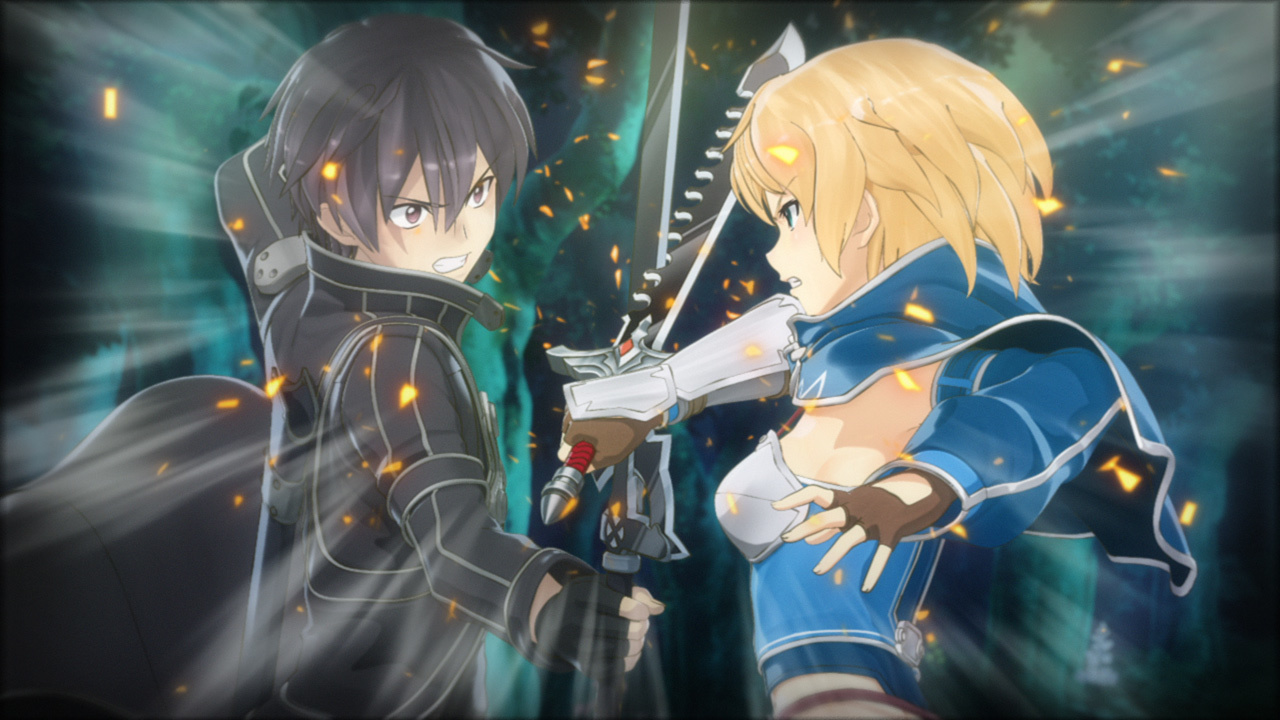 Sword Art Online: Hollow Fragment released about a year ago on the PS Vita, an enjoyable game that was marred by a seriously bad localization (if it could be called that). The text often had spelling errors, or was just plain incomprehensible. Thankfully the new PS4 version has received a proper translation, along with a nice framerate bump to 60 fps. But a new translation still leaves Sword Art Online: Re: Hollow Fragment with a rather boring story. Thankfully the gameplay fares a bit better. 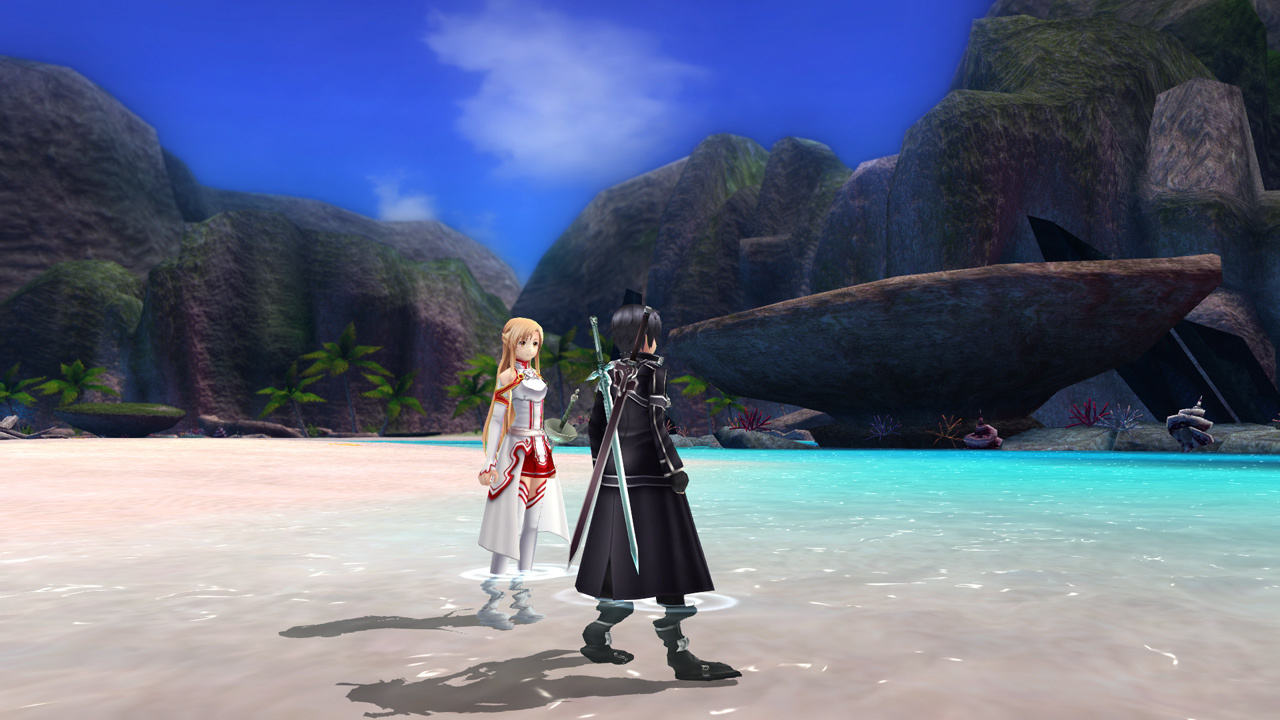 Sword Art Online: Re: Hollow Fragment is an alternate story told right at the conclusion of the anime's first arc of the first season. Instead of happening as it did in the show, the game glitches at a critical moment, resulting in Kirito being able to defeat Heathcliff. The consequences of the glitch are soon made apparent as the game won't let the trapped players out. Kirito and the others are left to assume that the only way to escape SAO alive is to get to floor 100 to beat the game properly. Before he sets out to take on the next floor, new players somehow get dropped in the game, now stuck like the others. Not long after is he whisked away to a new area of the game that only he can access, Kirito meets another player who is stuck there and can't leave. 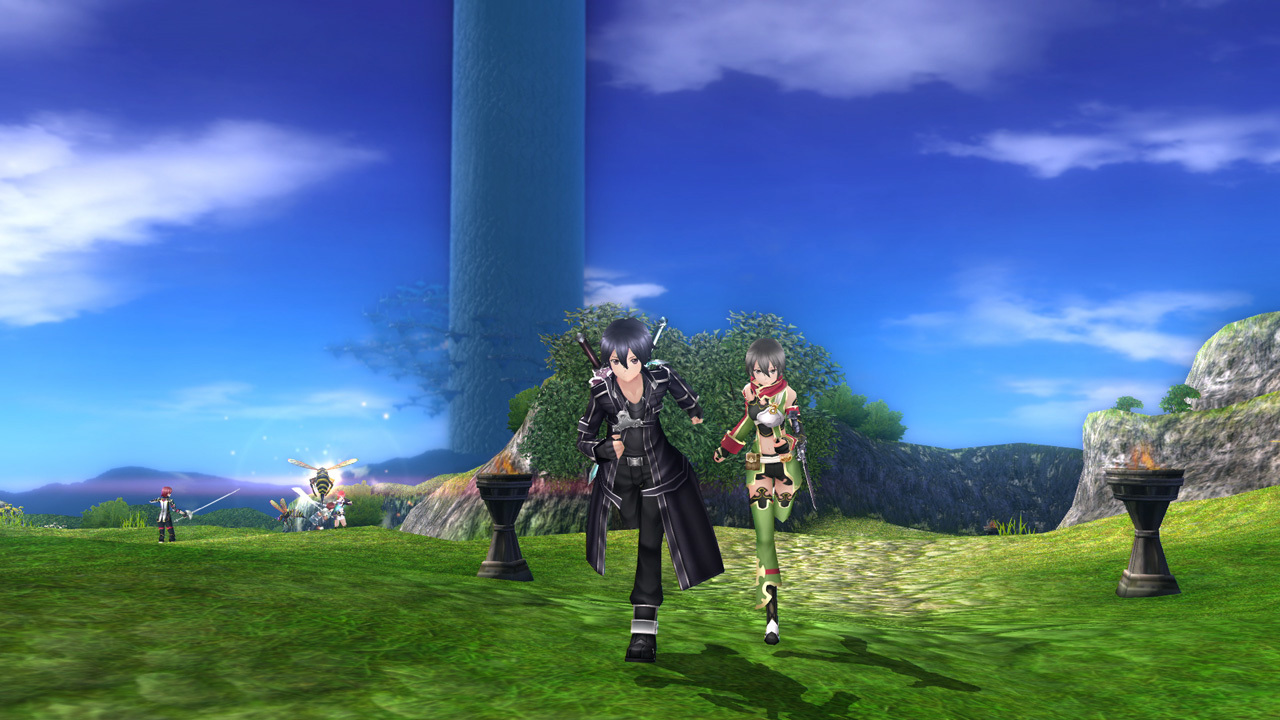 The game is actually split between the original PSP game and the new Hollow Fragment content from the Vita release. This is where you explore the Hollow Area and do special missions while trying to figure out the mystery of this new location. It's recommended to play the Aincrad arc first, though, as the Hollow Area is more difficult. Before the game begins, you can customize your avatar's appearance and gender, it makes little difference as you are still playing as Kirito. Never mind the fact that the creator of the game rigged it to strip all player personalization to show their real appearance in the show. However the game does a decent job of imitating the feel of an MMO. You go on quests to find intel and gain access to the boss room, get loot, and raid a boss. 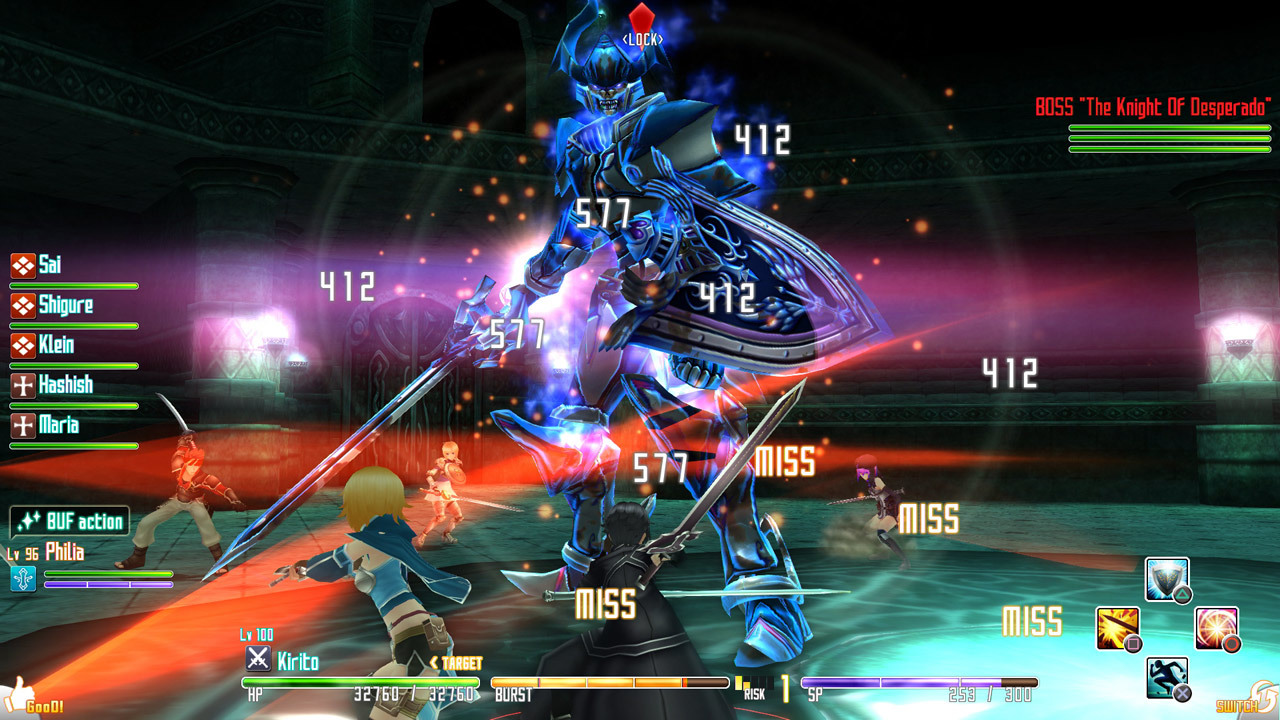 Combat is action-based with special attacks being fueled by a gauge which when depleted, weakens your special attacks. When that happens, you can switch to generic auto attacks while the gauge fills up. This does draw aggro though, and once you feel like you are taking a bit too much of a beating, you can use the Switch command. Switching makes you partner draw aggro instead, and the added benefit is that your special attack gauge gets refilled. You can also issue other tactical commands to your partner. Boss fights are like raids in any MMO. You and a group of NPCs will assault the boss. As the plot of Sword Art Online is still in play, the rule is that death of either Kirito or their partner means a game over. Thankfully the game auto-saves at the start of each new location or boss fight. These parts of the game are its biggest highlight and really makes it feel the most like an MMO. They can be quite tense. 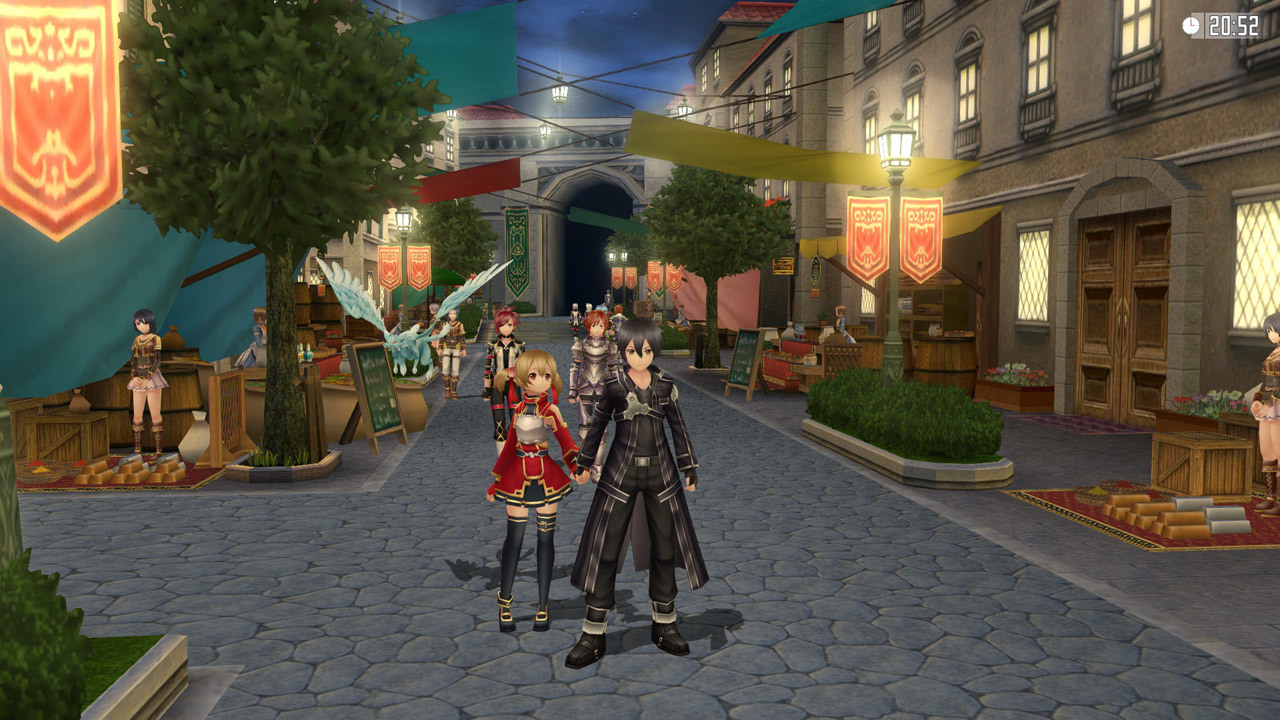 Less interesting is the game's writing. Despite a fixed translation, the writing in Re: Hollow Fragment can't exactly be salvaged. The biggest problem in the original anime was the boring story and lack of character development, as characters who are themselves were not all that interesting on their own. It's not much different here. All the girls all have the hots for Kirito even more than they do in the show, despite the fact that he's not all that interesting himself. He's too much of a Gary Stu who is totally good at everything he does, and therefore isn't that interesting. None of the extra story events help either, often falling into bad fan-service territory (much like the second arc of Season One). 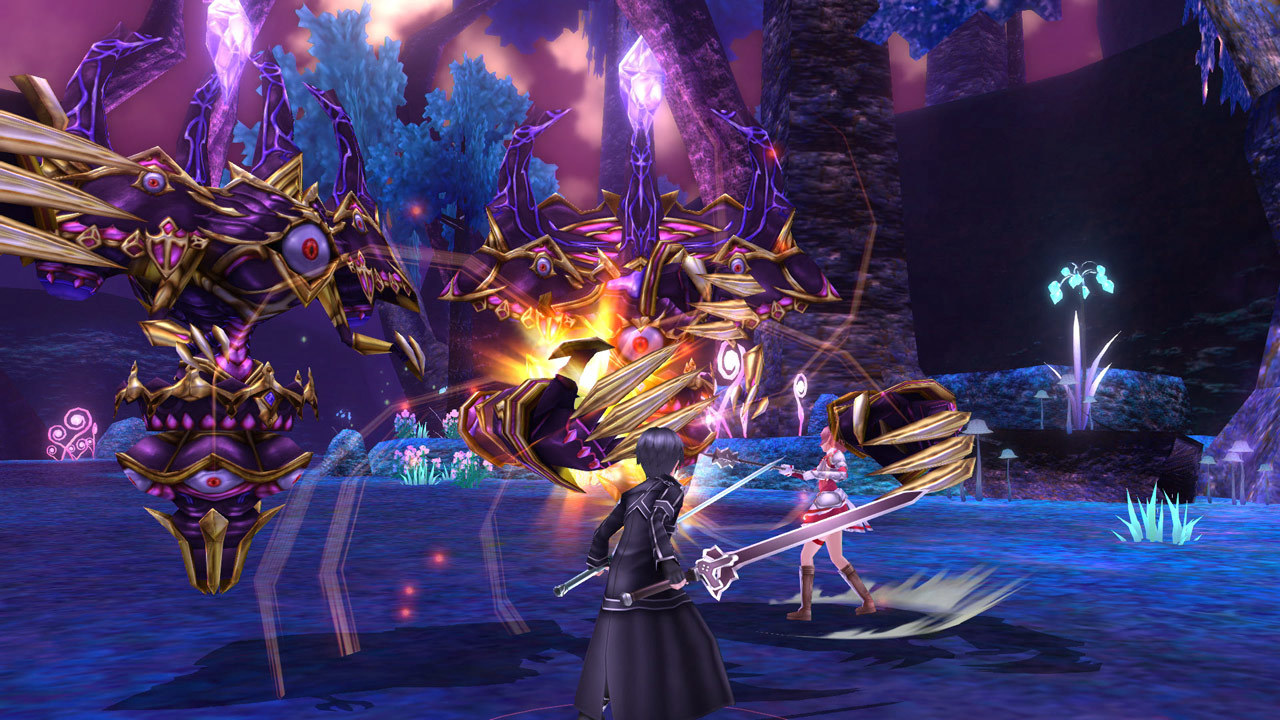 While the writing of the game might be lacking, the music and visuals are just decent. The models do look good on the big screen, and the game plays a constant 60 frames. Its gameplay at least makes up for the plot and character events, with providing up to over 100 hours of content to those willing to invest the time. It's a decent game for action/RPG fans who want something meaty and don't completely hate the series, as it's a better game than the medium it originated from.

The Good: The game is more enjoyable than the TV series, with a much improved translation this time around.
The Bad: A fixed translation can't fix bad writing.
The Ugly: All the girls are falling over Kirito despite the fact that he's taken. Even Kirito's cousin...

SUMMARY: Sword Art Online: Re: Hollow Fragment is a much better outing of the Vita game with a comprehensible translation and smoother battles that run in 60 frames. Sadly the negative elements from the previous release are still here.