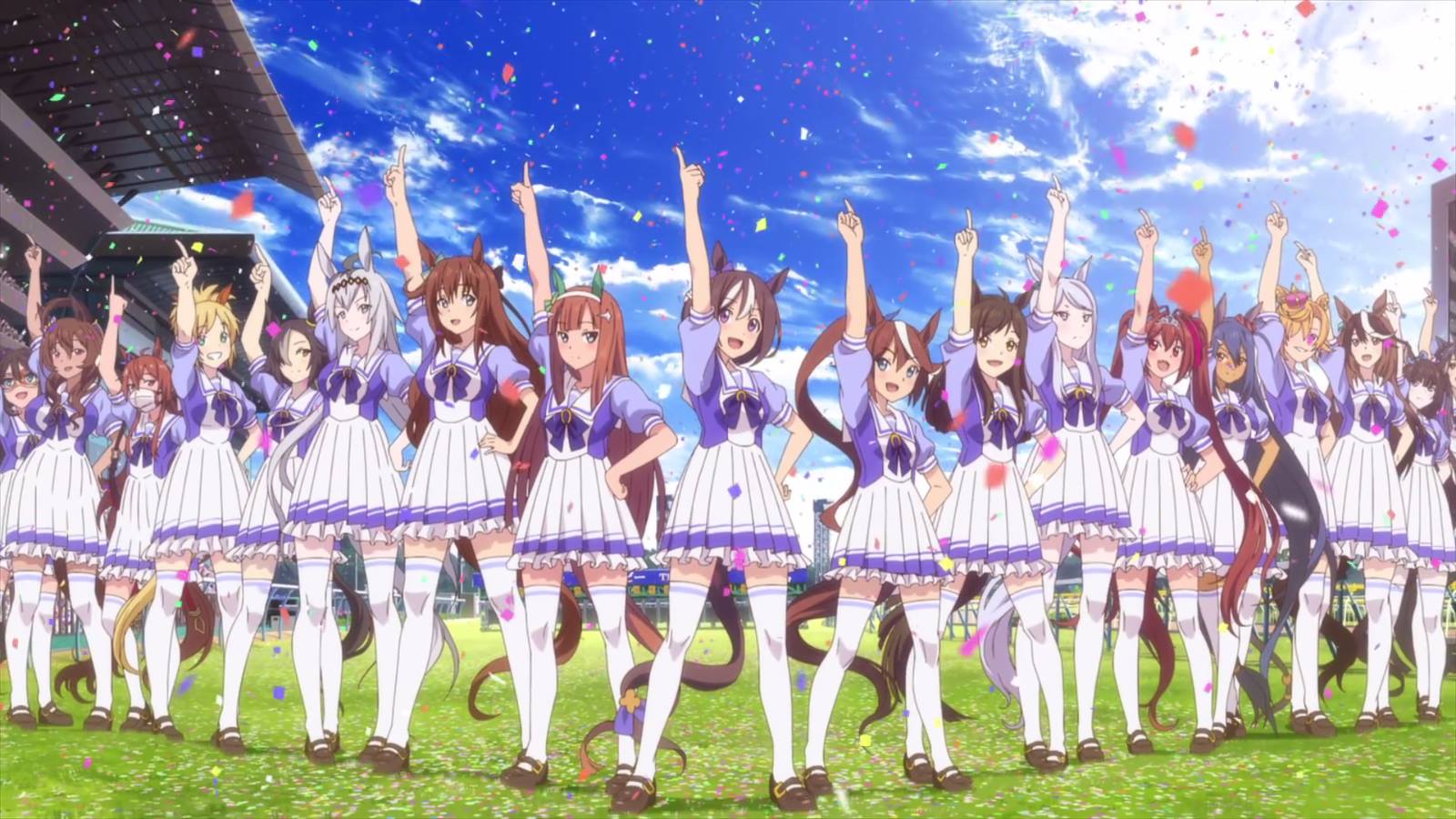 Horse girls. That's all I really need to say, and the characters of Uma Musume: Pretty Derby will come flashing into your brain. Seriously, is there anything else that's appeared this Spring anime season that has brought us as much joy as watching these human/horse hybrids race, sing, and train their hearts and souls out each and every week? I remember watching the original trailer for Cygames' original iOS game this is based on, and thinking how dumb and ridiculous such an idea could be. Then again, Japan has surprised me in the past by taking really stupid concepts like Monster Musume and Midori Days and crafting storytelling gold out of them.

And here we are mid-Spring, and Uma Musume: Pretty Derby is not only ahead of the seasonal pack, but it's itching to take the top prize for Anime of the Year. God help me, for this is either one of the very best series of 2018, or I somehow got kicked in the face by Secretariat and have suffered some sort of brain damage.

In the past, we have watched as zeros become heroes, ninja wannabes work to be the next Hokage, the most can-do willing of sports teams transform into the champions of the world, and the slickest of drift racers lay claim to the top of the mountain. Uma Musume: Pretty Derby wipes those classic dreams away, as the show wants to present all its viewers how they, too, can one day become the number one horse girl of Japan. And its Naruto or Midoriya to show us how is a perky, happy-go-lucky horse girl by the name of Special Week (Azumi Waki). Raised by a human due to her mother passing soon after birth, Special Week reaches the proper age to attend a special school in Tokyo that will help make her dream come true. 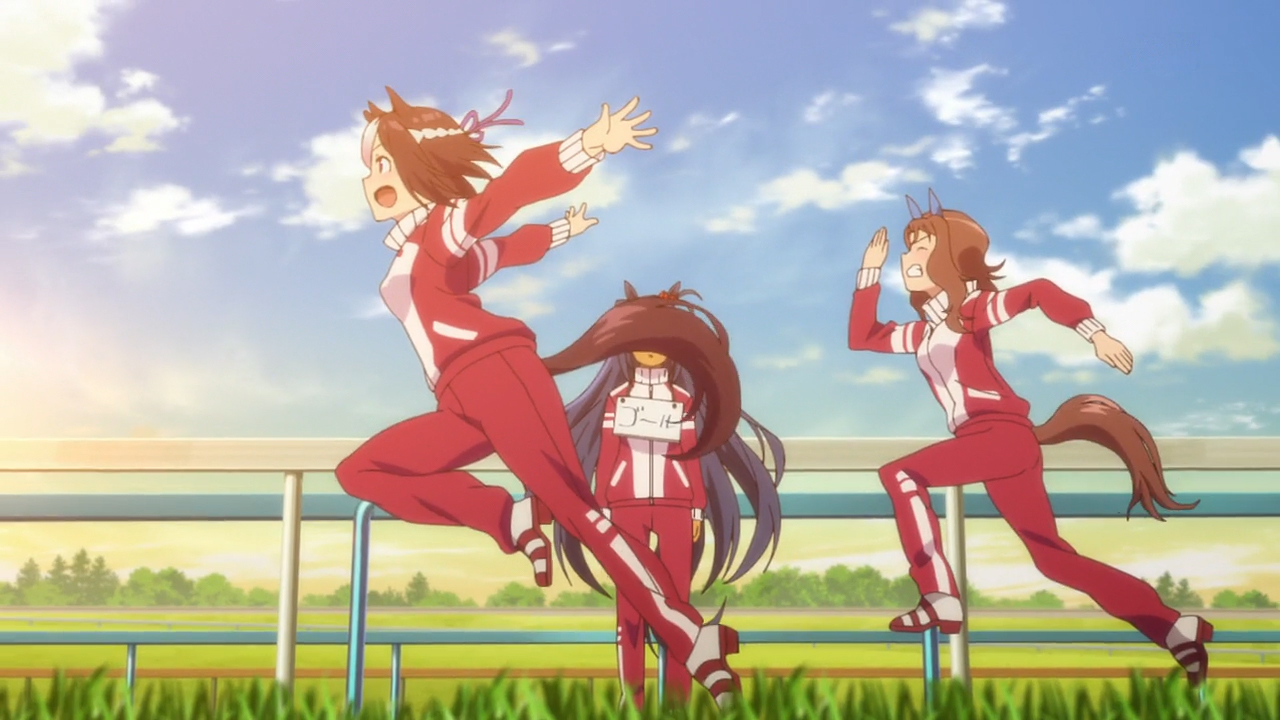 Upon entering her school, she is drafted onto team Spica, where Trainer (Kōji Okino) does all he can to get her into racing spirit. Joining the team out of the blue is Silence Suzuka (Marika Kōno), a racer that Special Week has admired from afar and is now standing side-by-side with towards victory. The team trains in every way possible to score not just a victory for each racer, but also -- get this -- the center spot in an idol performance the horse girls do once the race is over. With one anime, we get the sports/idol/cute girls doing cute things trifecta in a neat little package.

Just how ridiculous can a show about horse girls get? We've witnessed girls hammer in horseshoes into their track shoes, take part in crazy eating contests, play Twister on the beach, and even kick their trainer square in the kisser through many a wall when they think he's sexually harassing them. (He's actually just making sure their muscles are toned in before a race, but it certainly looks suggestive from the viewer's perspective.) How a series such as this was created will baffle any viewer in and out of the anime fandom, and its overall presentation is laughable when you merely glance at it. 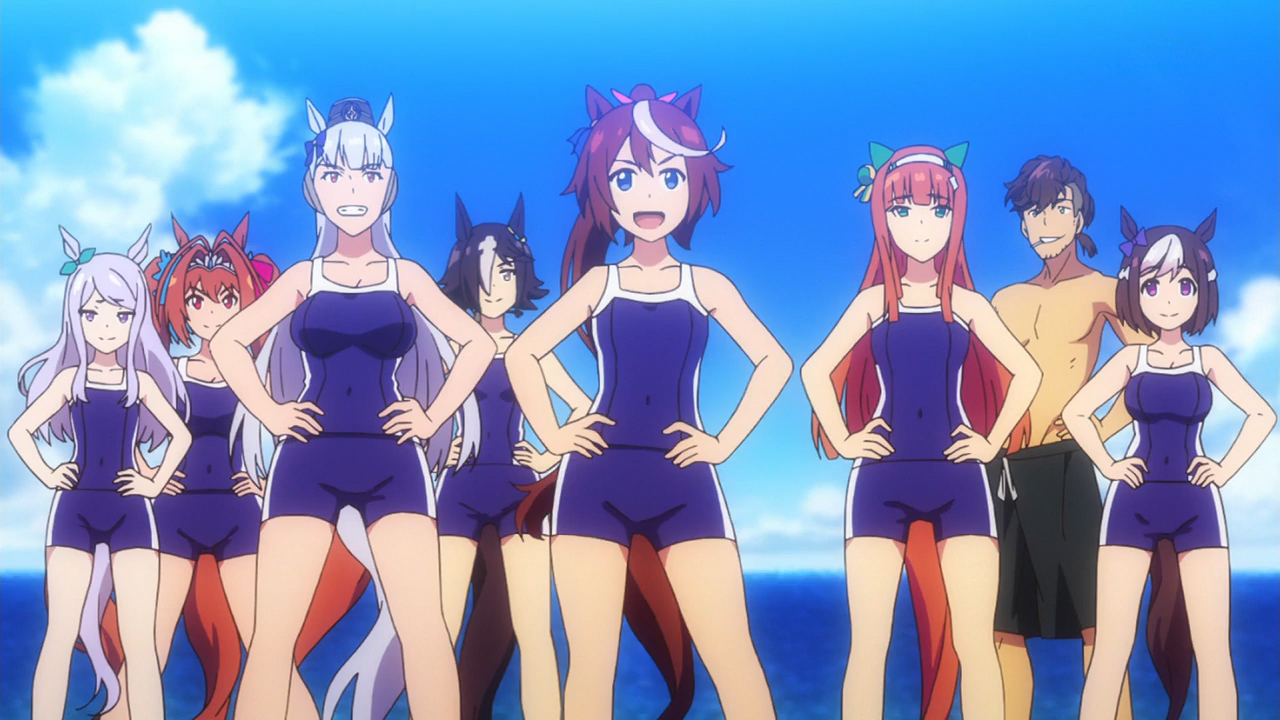 But to those who think I'm bashing Uma Musume in this review, I shall reply with a quick "neigh." (I swear, that's the only horse pun in this review!) In reality, this is one series that not only laughs with you while you're watching, but goes through every other emotion as well! What starts as one of the dumbest ideas on the planet is then replaced with some ridiculously good writing, fantastic character development, and a plethora of heartfelt moments that will melt your soul. Witnessing Special Week grow into becoming that number one horse girl not only has become the most inspirational event to watch weekly, but it's been presented with the utmost of care in what it hopes to accomplish.

What makes this a great sports anime is that it presents the growing of an athlete for the better and for the worst. There are victories, defeats, and even scary moments when fellow teammates may injure themselves and risk facing the ends of their careers. One of my favorite recurring moments in this show involves the horse girls yelling their frustrations into a hollowed-out tree stump on the school grounds. Hearing their gripes, their crushed visions, and especially beating themselves up for not gaining that victory not only makes for some fantastic character building, but it shows these anthropomorphic gals at their most human. 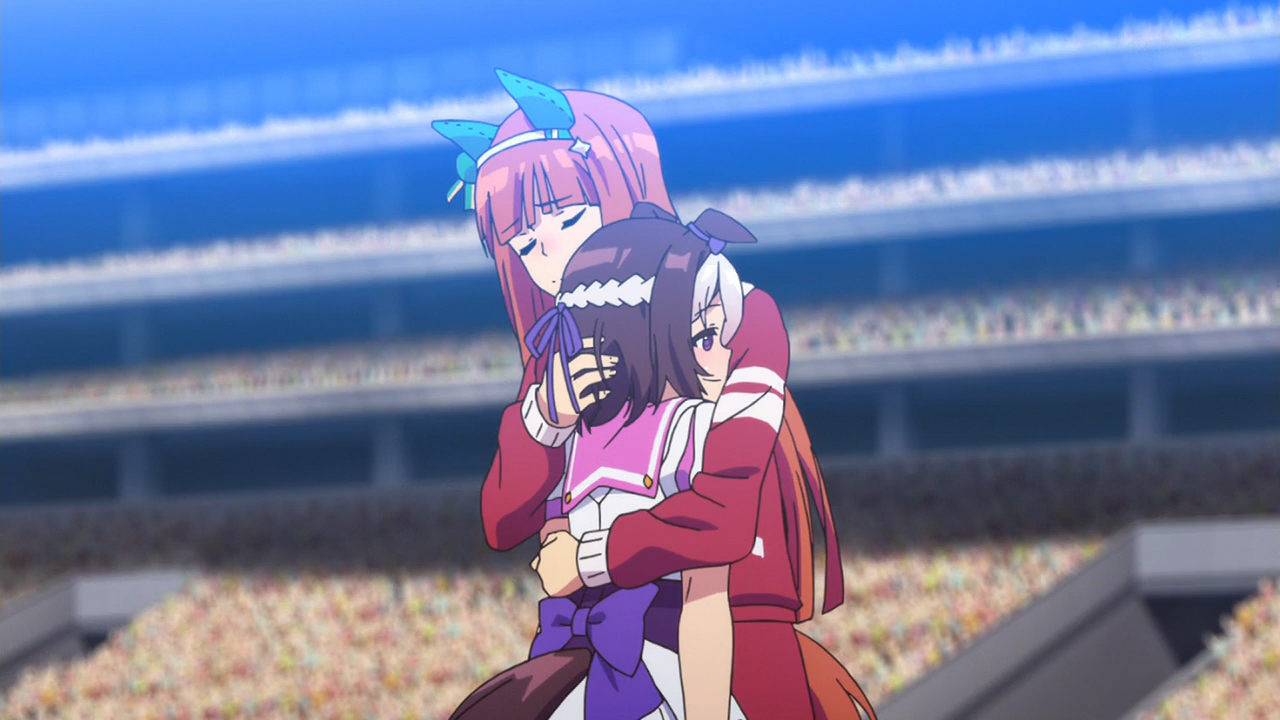 Thankfully, Uma Musume is not the type of anime that shows a character at the edge of quitting. Instead, it presents many a moment of the rest of the horse girls picking up their fallen comrade and giving them emotional support. Whether it's pigging out at a local diner, talking things over, or even just a mere hug from a fellow teammate, the anime showcases not just how you comfort an ally or a friend, but also how to get them back on their feet and onto the next hurdle in life. As loony as it sounds, Uma Musume may have some of the most inspirational pep talks and words of wisdom in an anime this season.

All of this is presented with the care and detail that only P.A. Works can offer. The studio behind Shirobako and Sakura Quest gives it their all to present the horse girls with much visual personality, so as to just not make them merely cute-looking. Their expressions on and off the track are wonderfully detailed, with each character having something unique about them that makes them stand out from the others. (I especially loved how they give the girls beer bellies soon after a nonstop eating frenzy, a hilarious visual gag that never gets old.) Of course, it's when the horse girls are racing when the animation reaching peak levels, which captures a high-speed level of excitement that will make you easily jump out of your chair and cheer. 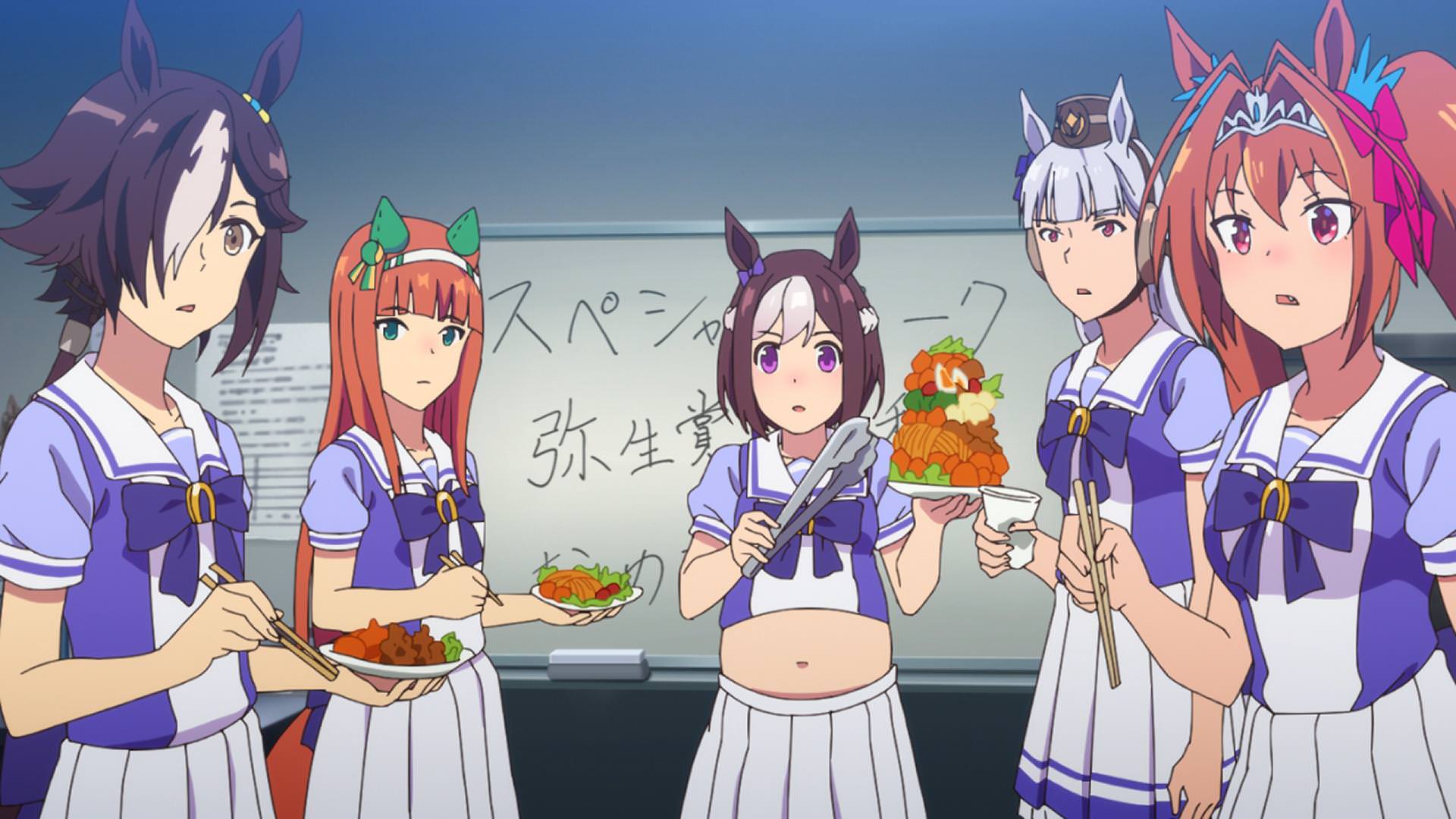 Uma Musume sports a cast of over 60 female voice actresses in the horse girl roles, all of whom have their own character traits and styles that keep one voice from clashing with another. However, it's easy to hear why Waki was chosen as the voice of Special Week. She embodies a strong can-do attitude throughout the show, with even her feelings of defeat after a lost race being presented with a relatable tone. Okino's Trainer also has some stellar moments, be it when giving sage advice from the heart or nearly having a stroke after the girls rack up a high grocery bill on his behalf.

It's rather surprising to see someone like Taro Iwashiro (Red Cliff, Gargantia on the Verdurous Planet) penning a soundtrack for a show about horse girls. Known more for epic compositions in drama or high-octane action flicks & anime, Iwashiro somehow manages to punch up the right kind of musical pomp & circumstance during a race, a cheerful melody on the girls' fun outing, and even a soft emotional piece when someone is in a downer. The Spica teammates take helm of the opening & ending tracks "Make Debut" and "Grow Up Shine!", two songs that not only capture the excitement of both racing and idol shows, but also are some of this year's catchiest theme songs.

Uma Musume: Pretty Derby will surprise you. What seemed to be a dumb idea on its surface has turned out to be one of the most memorable and enjoyable series of 2018. Laugh all you want at the concept of horse girls, but don't make me say "I told you so!" when you find yourself rooting for Special Week and the rest of the Spica team towards victory. Whether or not Uma Musume: Pretty Derby winds up being the best anime of the year remains to be seen, but until we reach that point seven months down the road, consider P.A. Works' latest show the odds-on favorite to win.

Uma Musume: Pretty Derby can be viewed on Crunchyroll & VRV. Episodes 1-8 were observed for this review. Promotional consideration provided by VRV.