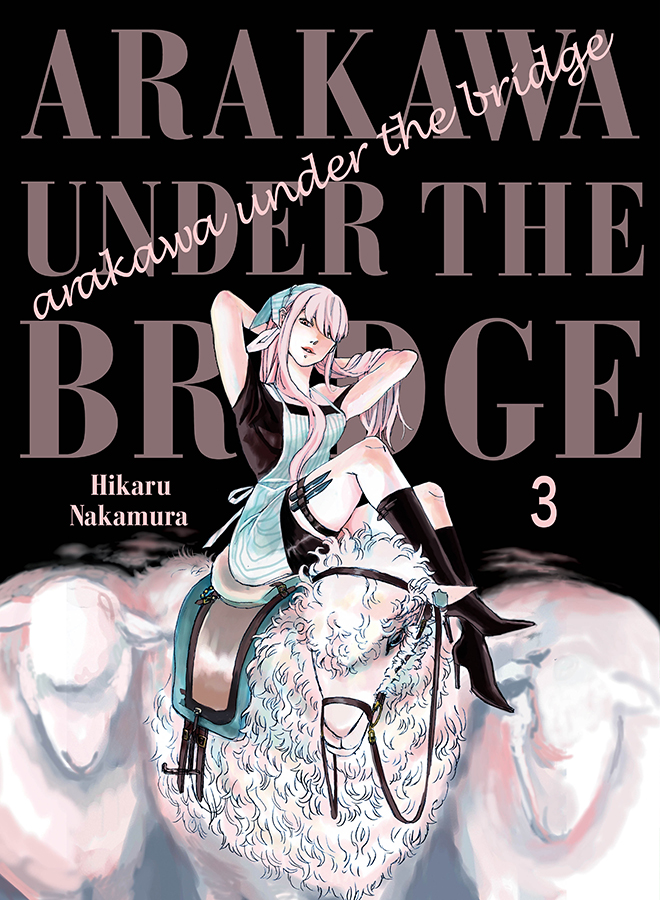 It's impossible to ignore the zaniness that Hikaru Nakamura's Arakawa Under the Bridge delivers in each volume. However, also as important to the looniness of the plot is the surprising amount of heart that is placed into its characters, especially when it comes to Recruit and Nino. Volume Three not only places a good chunk of this heart square into the palms of its readers, but does so with its trademark insanity still wonderfully intact.

After seemingly winning over his father's approval in the previous volume, Recruit now finds himself closer to the rag 'n' bone crew that resides by the Arakawa River. However, something appears to be bothering Nino, and with Recruit discovering a plethora of mystery cassette tapes, he soon discovers that she is hiding quite a few skeletons in her closet. With Recruit's dad still keeping tabs with the aid of his associates, he and the rest of the so-called normies find that the bonds that are keeping the two together may be a lot stronger than they once believed.

Of course, a storyline like this is never a simple cut & dry situation in the world of Arakawa Under the Bridge. In-between the juicy stuff, we have more wackiness to bear witness to in the form of Mayor, Hoshi, Sister, and the rest of the river residents. A simple trip to the barber almost results into an assassination attempt, whereas an astronomy class taught by Recruit goes off the rails when Nino reveals herself to be a lot more intelligent than she's let on. Then, there are the Mayor's crazy tournaments, ranging from a sumo wrestling competition to a King's Game contest to see whose wish will be granted in the end.

Many of these side and secondary characters often steal the spotlight from Recruit & Nino, and for good reason. Nakamura has a great talent when it comes to taking a person with a one-dimensional personality and filling them with many humanistic traits. With that, the likes of Hoshi's lovesick antics for Nino become more relatable, while Sister's gun-toting ways become more understanding when you see the emotional scars his past self gave him. Thanks to this aspect, the story is given a surprising amount of grounding that would make newcomers to the series warm up to the nonsensical parts.

A newcomer to the group, a manga writer stuck writing moé-filled stories when he wants to tackle science fiction, sees his delusions come to life hilariously when finding himself at the Arakawa River. His presence not only adds another (possible) resident, but becomes the trigger for Nino to reveal what's been on her mind. While still crazy at times, it's when Nino shows anger towards Recruit when her true self peeks through. In a way, seeing the two of them get closer over a bad discovery is not just sweet, but they also feel very commonplace in any sort of romantic relationship.

While I don't wish to spoil what happens deeper into this volume, I can say that the third volume (a combination of the fifth & sixth ones in Japan) is where the missing pieces of this strange puzzle suddenly start to appear. Whether or not they seem to fit in at this time is up to the reader's perception. Needless to say, Nakamura keeps to the core of what Arakawa Under the Bridge has presented since its first volume, and it doesn't seem to want to slow down in both the insane and heartfelt moments it wishes to deliver. A good thing, I say, as it keeps the story of Recruit and Nino one of the most unique and over-the-top fun romantic comedies you'll find in any manga.