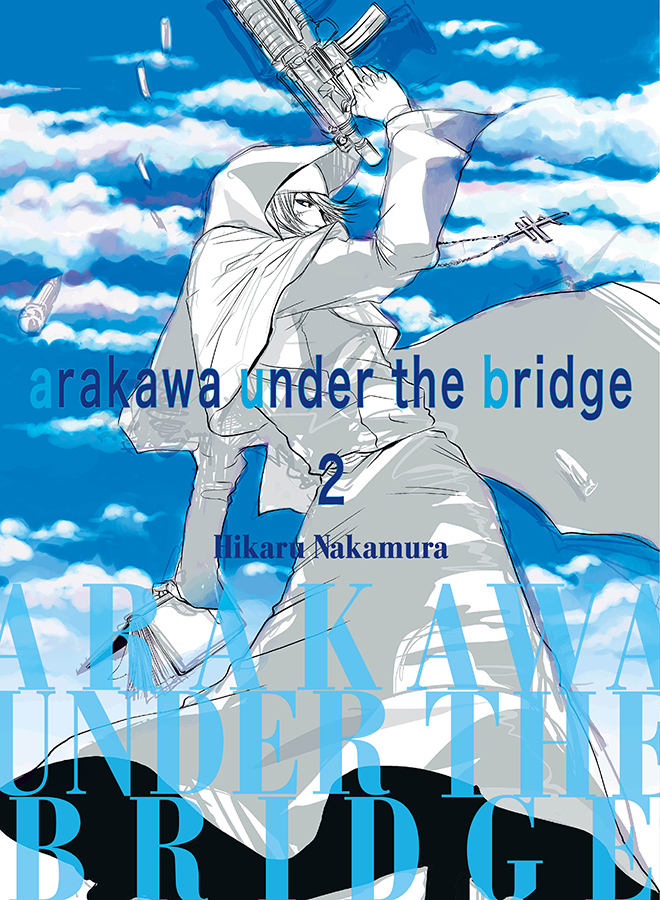 Common sense has no place of residence in Arakawa Under the Bridge. Hikaru Nakamura's manga series is ripe with crazy characters surrounding the level-headed Kou Ichinomya, who has recently been dubbed Recruit by its kappa-dressing mayor. However, the protagonist who did his best to owe no favors his entire life soon finds the strange perks of being a helpful individual, as evident in the latest volume of Nakamura's series.

The second installment of Arakawa Under the Bridge (which collects the third and fourth volumes of the Japanese series) has Recruit attempting to find his purpose for living with Nino and the rest of the bridge-dwelling residents. With his knowhow and intelligence, Recruit decides to start a school, where he hopes his common sense teachings will rub on the other folks who'd rather believe in the strangest mumbo jumbo imaginable. Truth be told, it becomes quickly apparent that the harder he tries to be a helpful guide, the deeper these folks' delusions seem to pull them down. Of course, all of this is done rather humorously, with there being no sign of repercussions whatsoever for following the dumbest advice to the letter.

It's a series like this that welcomes its audience to just throw away any sort of deep thought process one usually has whilst reading. Even if it feels like a lesson is about to be taught, Nakamura quickly throws in one hell of a non-sequitur moment that makes the learning process moot. In many cases, this can backfire for the writer, as it'd keep the characters from evolving for better or worse. Thankfully, Nakamura has a sort of talent that help build a character's profile up while still pushing down their crazed mentality.

One great example of this comes in the form of Hoshi. The star-headed foe of Recruit often finds himself trying to win the love of Nino from him, only to fall face first into failure. (A guitar/violin musical competition between the two of them showcases this in a brightly hilarious way.) It's when Hoshi tells Recruit his backstory that involves fame and musical chart-topping success where you begin to realize why he -- and the rest of the characters, for that matter -- have a fondness for their crazy way of living. Yes, it can be rather humbug at times, but it's the way this onion gets its layers peeled that makes it all the more fun reading Arakawa Under the Bridge.

This latest volume even has the first threat of the residents' livelihoods at play, with Recruit's father attempting to buy the land in order to save the family name that he thinks his son has tarnished. It then becomes a test of courage for Recruit, who attempts to summon up the might to speak one-on-one with his parent. In its usual creative fashion, it results in the characters wishing upon a literal shooting star that they fashion out of Hoshi. Although the problem is resolved temporarily, one must wonder how much of a role Recruit's father will play in future chapters of the manga.

Whatever may be the case, the latest volume of Arakawa Under the Bridge continues to have its comedic charms and nonsensical shenanigans splattered throughout its pages. How Recruit, Nino, and everyone else living down by the river will carry onward towards their crazed living situation remains to be seen, but for the time being it's best not to think too deeply about it. Nakamura has a knack for making the most loony of characters concepts work, with each story brimming with character, personality, and the right amount of zaniness. Volume Two of Arakawa Under the Bridge is no exception, bringing its readers a heaping dose of good fun with a hint of kappa broth.