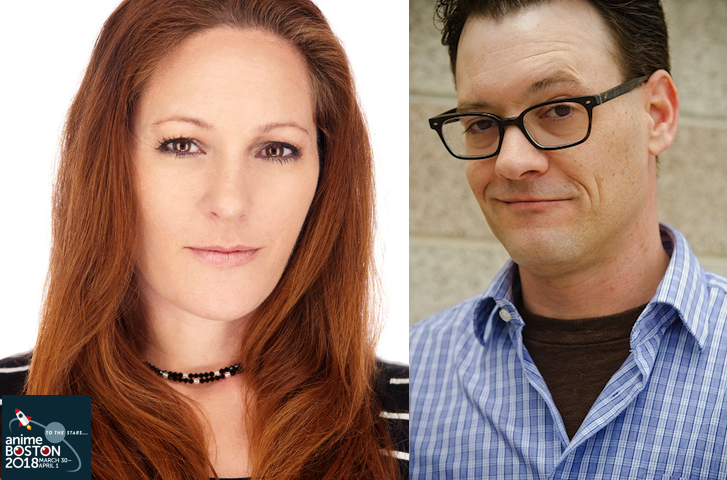 The next wave of North American guests for Anime Boston 2018 has been unleashed, with voice actors Rachel Robinson and Christopher Bevins joining the ranks!

Rachel Robinson has spanned the spectrum of video games, animation, national commercials, promos, and anime. In the gaming realm, she’s best known for her role as Oerba Yun Fang in the Final Fantasy XIII trilogy, as well as various roles throughout Fallout 4, StarCraft II: Legacy of the Void, and Dragon Ball Z: Xenoverse. Recent anime roles include Chitose Oribe in Sakura Quest, Mauve in ACCA: 13-Territory Inspection Dept, Hiroko in Yuri!!! on Ice, Anastasia in Drifters, and Namazuo in Touken Ranbu: Hanamaru. She is also Farangis in The Heroic Legend of Arslan, and Sakura Ohgami in Danganronpa: The Animation, as well as donning the villain cap in Hellsing Ultimate as Zorin Blitz and Sailor Moon as Cameran.

Since 2001, Christopher Bevins has acted in, directed, cast, produced, and/or adapted scripts for over 200 anime projects. His anime acting credits include Japan in Hetalia, Nine in Terror in Resonance, Twenty Faces in Trickster, Sero in My Hero Academia, Nico in Tokyo Ghoul, Hiroshi in Michiko & Hatchin, Rasputin in Drifters, Hanamori in Princess Jellyfish, Joe in Prison School, Hagakure in the Danganronpa anime series, Lahar in Fairy Tail, and Beck the Dog in BECK: Mongolian Chop Squad. Chris has also worked on several video games, most notably as Dhalsim in Street Fighter IV and Street Fighter V.