GAME REVIEW | Augmented "Radiant Historia" Port is Worth Picking Up

GAME REVIEW | Augmented "Radiant Historia" Port is Worth Picking Up

Radiant Historia came out in 2011 for the Nintendo DS at near the end of it's life span. Instead of waiting for the game's 10th anniversary, Atlus has decided to do an enhanced port of the game rather than a remake via a Perfect Chronology edition. The reason for this being is that it's cheaper, easier, but also since the 3DS doesn't quite have enough of a life left in it to last that long. While the extra story content added to the game that isn't DLC doesn't give one reason to pick the game up again, the rest of Radiant Historia's improvement just might do that. At the very least, it's another opportunity for those that missed the boat the first time, as this version is more definitive than ever.

The story of Radiant Historia is about a man named Stocke, who works for the Special Intelligence division of the Alistel military as a special agent/spy. Alistel is fighting a war with the nation of Granorg, a country run by a tyrannical queen, and one whose actions are suggested to the massive desertification to the continent. When his first mission goes bad, Stocke is given the opportunity to undo his mistake, as well as go to an alternate history to find other means or intel to progress in his own timeline. 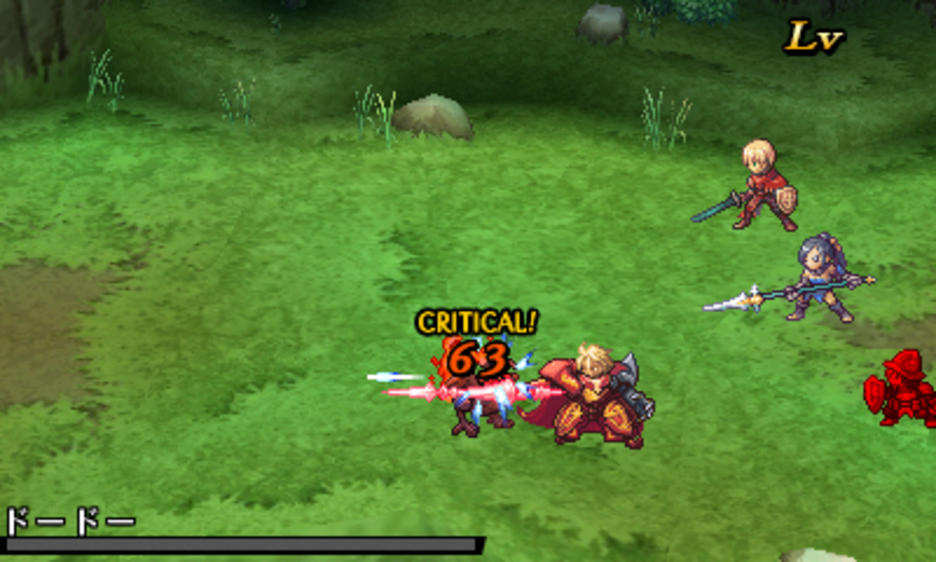 Radiant Historia goes on like this, with you switching between the two timelines in order to bring the world to a positive conclusion and avert death. Do to the nature of the game, there's no new game plus, but rather a chapter select of sorts. This is good, since there are multiple endings that are pretty much glorified game overs.

Gameplay for Radiant Historia seems at first glance pretty standard, but then the game throws a few wrinkles to make battles more interesting. They are played out on a 3 x 3 grid where the enemies reside, and the basic strategy is that you can knock enemies into other enemies' panels and attack them all as part of a combo string. If that was all the game did, it'd still be pretty lukewarm. But you also have the ability to switch the turn order to help you execute these large combos. Later on, you also get the ability to use a mana burst to completely eliminate an enemies turn. 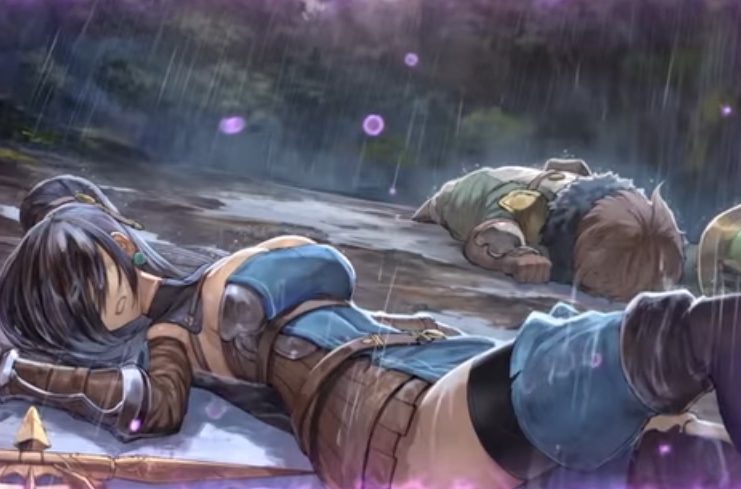 There are also other mana abilities that do other things as well, and these systems put the game's battle system over the edge. One new wrinkle to the battle system is the inclusion of character support skills. Any of the non participating members of the party can do a support skill, such as Marco doing an instant enemy scan on new enemies or support attacks or healing. The game also has field abilities to help you solve in-game roadblocks or find treasure or avoid enemy detection. Attacking an enemy on the field will stun them, but doing so a second time gives you a preemptive turn in combat. It's nothing special compared to the battle system, but those are nice additions.

The additions or enhancements made to the 3DS version of Radiant Historia are slight, but most additions are welcome. Its visual style doesn't look all that different aside from improved resolution and new character art, but it's in the game's audio department that the game seems the most improvement. Now, the main characters of the game are fully voiced, and NPC's are partially voiced. While I'd have like other story important NPC's to also be fully voiced, the main characters really needed it. It really helps promote the narrative. Courtesy of Yoko Shimomura, the soundtrack is improved just be being sampled at a higher bitrate, providing a better quality for players' ears. 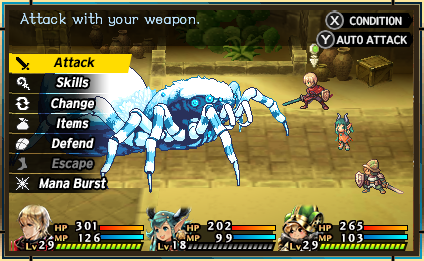 Other additions include a difficulty setting, where you can play at a higher difficulty for a challenge. If you already played the game and just want to re-experience the story, there's a Friendly mode. This mode can't be switched out once selected, but the game becomes a lot easier, where many of the game's enemies can just be killed outright by your sword slash while on the field. If you want to still fight them normally to get the bonus experience, you can just run into them to initiate the battle, albeit with a preemptive strike.

There some less compelling new story content in the form of the third Possible History, where you basically do side-quests that take place in alternate timelines for a historian named Nemesia. Also available is the Vault of Time, which is a weird place that cuts off the use of items, but battling all the enemies there will open new areas with increasing difficultly. The dungeon pretty much serves as a training ground, as victories will net you a special currency that can be traded to let you get some nice equipment and items. It's pretty pointless to use the new gear for selling for cash, as their monetary value is a joke. But I could see it as a way to get stronger outside of the main game. If you want money, the best strategy is to re-fight some bosses or do the Nemesia missions.

And that's pretty much only for the normal and hard difficulties, as Friendly is so easy it's not worth doing the new content unless you want the absolute best layout. There's some DLC planned for the game which can also help players out, but I can't comment on the story DLC, which isn't out yet. So while the game's new in-game story content isn't all that great, the rest of Radiant Historia's improvements in this version really push an already great game over the edge, making it the most definitive version to play. If you are a fan of RPGs, then picking this gem up is a no-brainer. I highly recommend it, so don't let this opportunity pass you up once again!

The Good: The voice acting really helps improve the story.
The Bad: Only the main characters are voiced.
The Ugly: New in-game story content is a bunch of unrelated side-quests.

SUMMARY: While the new story content isn't worth picking up the game again, every other improvement in Radiant Historia: Perfect Chronology makes double-dipping worth the repurchase.