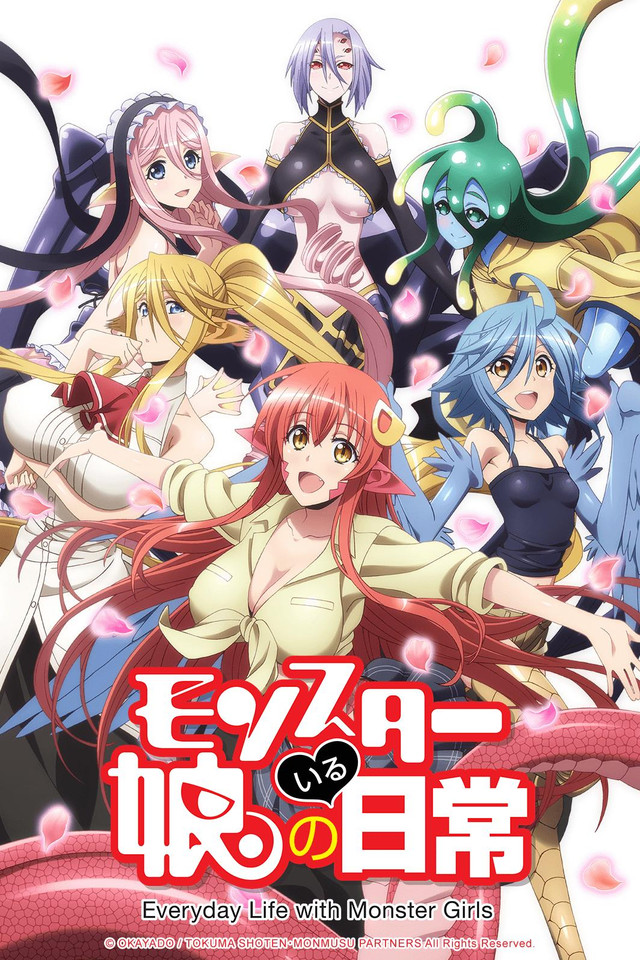 A premise like Monster Musume: Everyday Life With Monster Girls should not work in the ways it does. These types of programs usually play to one incredibly small -- albeit wealthy -- otaku fanbase who goes out and purchases everything that has these characters plastered on (including one 23-foot cuddle pillow that not only cost $800, but also sold out in less than an hour). It should be the dumbest thing that's on TV right now, and I should be hating every moment I've had to bear witness to.

And yet here I am, still sitting my ass down like clockwork right when the next episode appears on Crunchyroll, laughing myself silly from start-to-finish. Either I have lost my sanity and should be carted off towards the nearest loony bin, or Monster Musume may be one of this year's best-written comedies. Odds are, it's probably the latter. 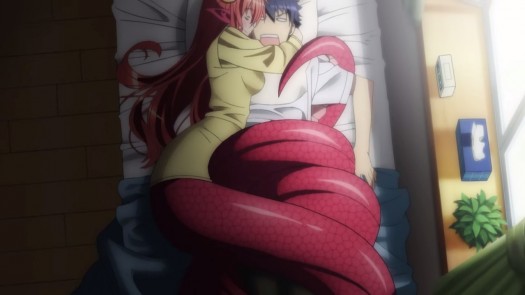 Monster Musume centers on the premise of human/monster hybrids (known as liminals) living equally with humans on Earth. This is all thanks to the Interspecies Cultural Exchange Act, where the liminals can live freely with regular folk, so long as they have a human sponsor or babysitter. (Think a foreign exchange program, only instead of a young mind from a far-away country, you can get a centaur or faun living under your roof.) These hosting arrangements are all put together by special coordinators, who do their best to find the right home for each liminal.

Enter Kimihito Kurusu (Junji Majima), an average high school student with a good head on his shoulders. One day a coordinator by the name of Ms. Smith (Yū Kobayashi) appears at his doorstep, with a young lamia named Miia (Sora Amamiya) awaiting to be welcomed into Kimihito's home. Just one problem: he didn't even sign up for the program, which means he's nowhere near prepared to be playing host to the half-human, half-snake being. And the troubles don't stop there, as Kimihito's home slowly starts losing more room as the weeks go by. 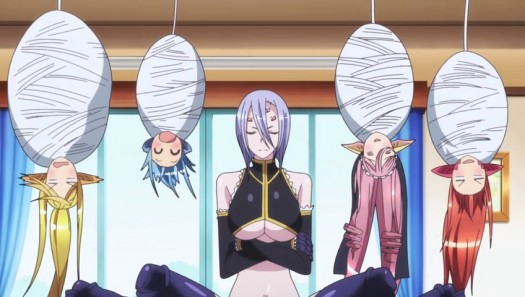 Soon Ms. Smith throws in more monster girls into the mix, some of them under her own jurisdiction, other times because the liminals don't have another safe haven to go to. From there we are introduced to the harpy Papi (Ari Ozawa), the centaur Cerea (Natsuki Aikawa), slime girl Suu (Mayuka Nomura), the mermaid Mero (Haruka Yamazaki), and giant spider girl Rachnee (Sakura Nakamura). With this being a harem series, they all -- of course -- fall in love with Kimihito, with Ms. Smith also adding that, due to certain changes in the law, he's expected to marry one of them.

Thus we are then thrown into the usual tropes that comes with a harem comedy, including the girls fighting over who Kimihito should be with, who could take care of him the best, and the by-the-numbers art of seduction. The joke here is that -- because these are monster/human hybrid girls -- the tropes are thrown into the most extreme circumstances. (One such recurring gag involves Miia's attempts to cuddle with Kimihito, almost crushing his body to the brink of death every time.) It's also because of this aspect that Monster Musume is able to dive into certain gags that all-human harem anime can't. 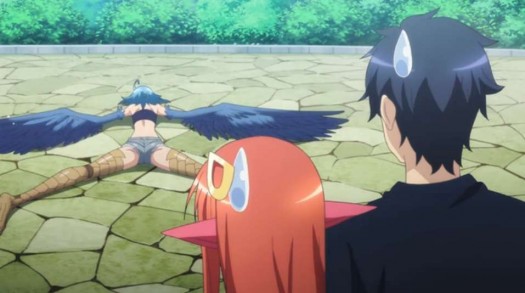 It's the latter that makes this anime worth watching. Due to the nature of the girls, these gags wind up being a hoot to witness. An episode involving Kimihito helping Miia with shedding her skin is built up to be as scandalous as a guy simply taking a girl's clothes off, with the punchline involving the poor sap accidentally placing his hands where they don't belong. In the same episode Papi attempts to lay an unfertilized egg as a perverted cameraman films for "documentary purposes," with all the girls beating the living bejesus out of Kimihito when they thought the egg was his doing.

At first these gags would seem pretty gross to watch, and that would be the case in most instances. However it's how these moments are presented that make Monster Musume so much fun to watch. Not to mention, because of the intelligence levels of the laminals, their ways and opinions of the surrounding world make it all the more funny the closer to failure they get to swooning their host. To put it bluntly: they're idiots (Ms. Smith included), and watching them act stupid for their love is what drives the hilarity towards its tallest peak. 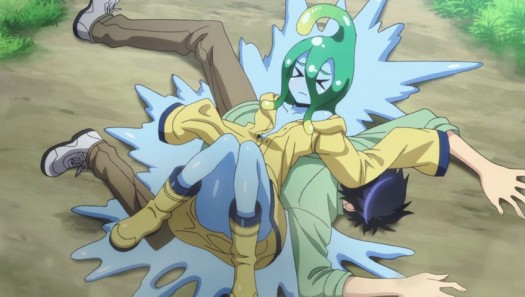 High props must be given to the cast for bringing out some surprisingly wholehearted performances, ranging from Aikawa's tough and staunch demeanor as Cerea to Amamiya's adorably and dimwitted Miia. When it comes to who steals the show, though, both Ozawa and Nomura as Papi and Suu respectively collectively take the prize, with the former bringing a sort of free-spirited goofiness and the latter a cutesy, innocent view of the world she's now residing. As the sole main male character on the show, Majima's Kimihito is that perfect blend of perplexed human mixed with the heart of a well-rounded individual. He may not have the slightest idea what sort of mess he'll find himself in each week, but he's determined/forced to tackle on any situation with all of his might.

Animated by Lechre (Assassination Classroom) and first-timers Seva Monster Musume brings to life these characters in beautiful shades, with great detail towards each monster girl's physical appearance. What shines the brightest are the attention to visual gags, be it a police officer's bouncing eyes as he watches Cerea trot through the street or when Rachnee constructs a web hammock for Papi & Suu to play on. However one visual bit that bothers me is Kimihito's constant blank stare, which could symbolize that a) he is rather clueless about the situation that he's in or b) he really just doesn't give a f**k anymore about what's happening around him. Still, it can get rather tiresome seeing him almost always looking like a backup musician for Gorillaz.

Monster Musume: Everyday Life With Monster Girls is better than it deserves to be. It's incredibly fan-servicey, for sure, but it makes up for it by having some smart comedic timing blended with some adorably lovable -- and highly stupid -- characters that crank the funny to its highest levels. At first glance it could be very easy to write off this show, but once you plop yourself down and begin watching you'll find it hard to dislike just about anything that Monster Musume throws at you. In short: just give in to this monster girl madness and let your funny bone take over.

Monster Musume can be viewed on Crunchyroll, The Anime Network, and Hulu. It has been licensed by Sentai Filmworks. Episodes 1-8 were observed for this review.

REVIEW | The Master Would Approve...