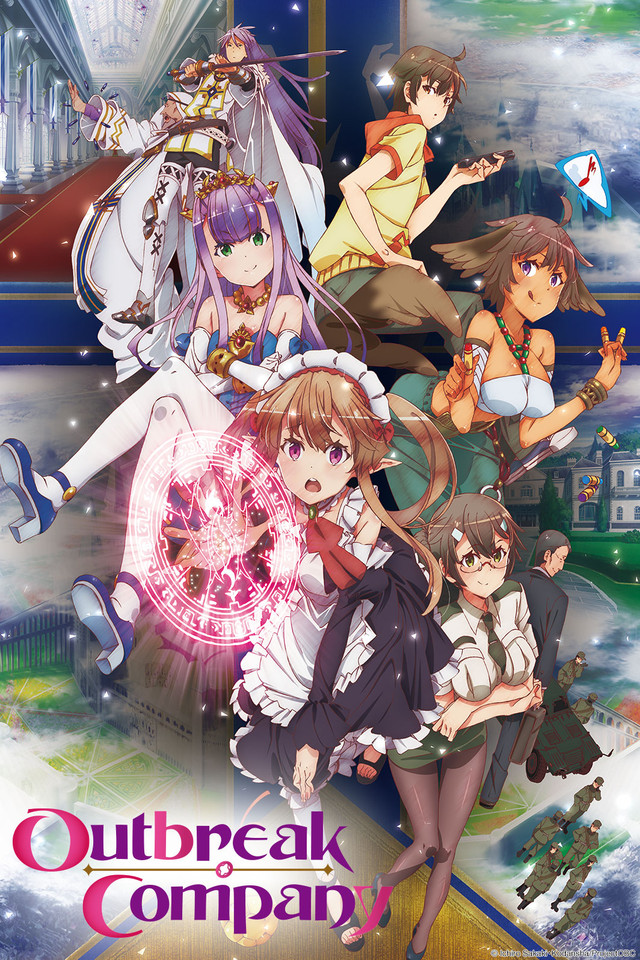 There's a right way and a wrong way to showcase the general mindset of good otaku fandom. For the most part, sadly, its portrayal hasn't been painted in a good light, especially with some of the self-parodying series out there. It's a tough niche to crack in all honesty, as detractors can easily bat anime, manga, and games as child's play, sometimes going so far as to label people within the community as freaks. Yes, there are a few bad apples, especially in the 2ch realm, but in reality anime and gaming fans are just your average joes, and many times they just want to be seen from a much better perspective.

Thank God for a show like Outbreak Company, an anime that not only captures the hardships of understanding the anime and gaming community, but provides both a heartfelt and silly means of doing so.

Based on a light novel series by Ichirō Sakaki (Scrapped Princess, Code-E) the series follows Shinichi (Natsuki Hanae), a high school kid who got sucked deeper into the otaku realm after his heart was shattered by a childhood friend. One day he comes across an ad for a company looking to hire someone who was knowledgable in the anime/gaming field, and after passing the test with flying colors soon finds himself drugged and transported to the Holy Eldant Empire, a magical dimension that's accessible via a portal in Japan. There he finds out his task: to spread otaku culture throughout the Empire in order to make peace between the two lands.

Within Eldant lies elves, dwarves, lizardmen, and furries, many of whom become employed as Shinichi's help and, in some areas, find themselves being his students. He strikes up a friendship with his half-elf maid Myucel (Suzuko Minori), whom Shinichi teaches to read and speak Japanese, as the two lands cannot communicate with one another without the help of magic rings. There's also the monarch of the land, Petralka (Mai Fuchigami), who forces her way into being Shinichi's student so as to not be jealous of the elf.

What happens in Outbreak Company is pure magic. On one hand many of the things Shinichi teaches the people of the land are his one-sided views of anime and gaming in general, which is why it's funny when his bodyguard Minori (Maaya Uchida) bumps in and showcases her love of the fujoshi genre, sometimes leading towards some lighthearted misunderstandings. However on the the other hand the series acts as a playful and fantastical take on how some fans try to spread their favorite shows or comics to those who are uninterested in anything the otaku culture covers. It may be Japan trying to spread its culture to another realm, but from a much deeper perspective it's one fandom trying to convince the disbelievers why it's something worthy of checking out. (The Bronies out there know exactly what I'm talking about!)

Outbreak Company may have the best writing in the anime comedy realm since Kotoura-san. From the character banter between Shinichi and Minori to even some of the visual gags (i.e. pointing out fully-bearded dwarves as being ten years-old) there is not a sour note to be found in this series. The show works wonders, too, when breaking the fourth wall, bringing some of the better, unexpected laughs. (For example: when a character heals from a very bad wound quickly, Shinichi utters, "She's doing so well, I almost thought we skipped an episode!")

It also helps that all the characters are so damn likable! Shinichi is your everyman fanboy, representing anyone ranging from anime fans to even your Trekkies and comic book geeks. Myucel is your kindhearted person that you can root for to see if she winds up being with our protagonist in the end. However the real show-stealer is Petralka, who -- while containing a good heart -- has a very similar mannerism to that of Queen Elizabeth in Blackadder II. (Hell, she even has her own Lord Melchett!) The addition of Elbia the werewolf (Sumire Uesaka) at first makes it seem like she's just been added in to appease the cat/dog-eared loving demographic, but her comic relief elements help to add on a special kind of silliness only a character like her can provide.

Adapting the light-novel's worlds into anime form is done lovingly by Studio Feel (Nagasarete Airantou, Da Capo), with the Holy Eldant Empire being given a sort of life that usually is only seen in films, much less TV. The action sequences are done with great detail, especially in the soccer episode where everything is being destroyed in a rip-roaringly funny fashion. Keiji Inai's score sets just about every mood well, with using what he learned from doing the last two Gran Turismo games to create a soundtrack worthy of a fine comedy with dramatic elements.

There is one downside to Outbreak Company, and that is in order to get all the jokes you need to already be knowledgeable in the anime field. References to Attack on Titan, Inazuma Eleven, the BL sub-genre itself, and even some of Sakaki's past works are riddled throughout the show, and anyone who doesn't get them may be missing out on half the gags. (Petralka's reaction to what happens in the first chapter of Attack on Titan is too funny for words.)

This small speed bump doesn't take away from the fact that Outbreak Company is a very funny and unique take on introducing the otaku culture to those unfamiliar with it. It's a sharp silly fare that will have you rolling around laughing more times than you'd think a show like this would. Sure it can get a tiny ecchi (a boob joke here, a panty shot there), but only in the smallest doses feasible. Overall Outbreak Company is as much fun as watching a bunch of dwarves beat the crap out of elves with soccer balls.

Outbreak Company can be viewed on Crunchyroll, and will be released later this year on DVD by Sentai Filmworks. Originally posted on the ESH EGMNOW Page.