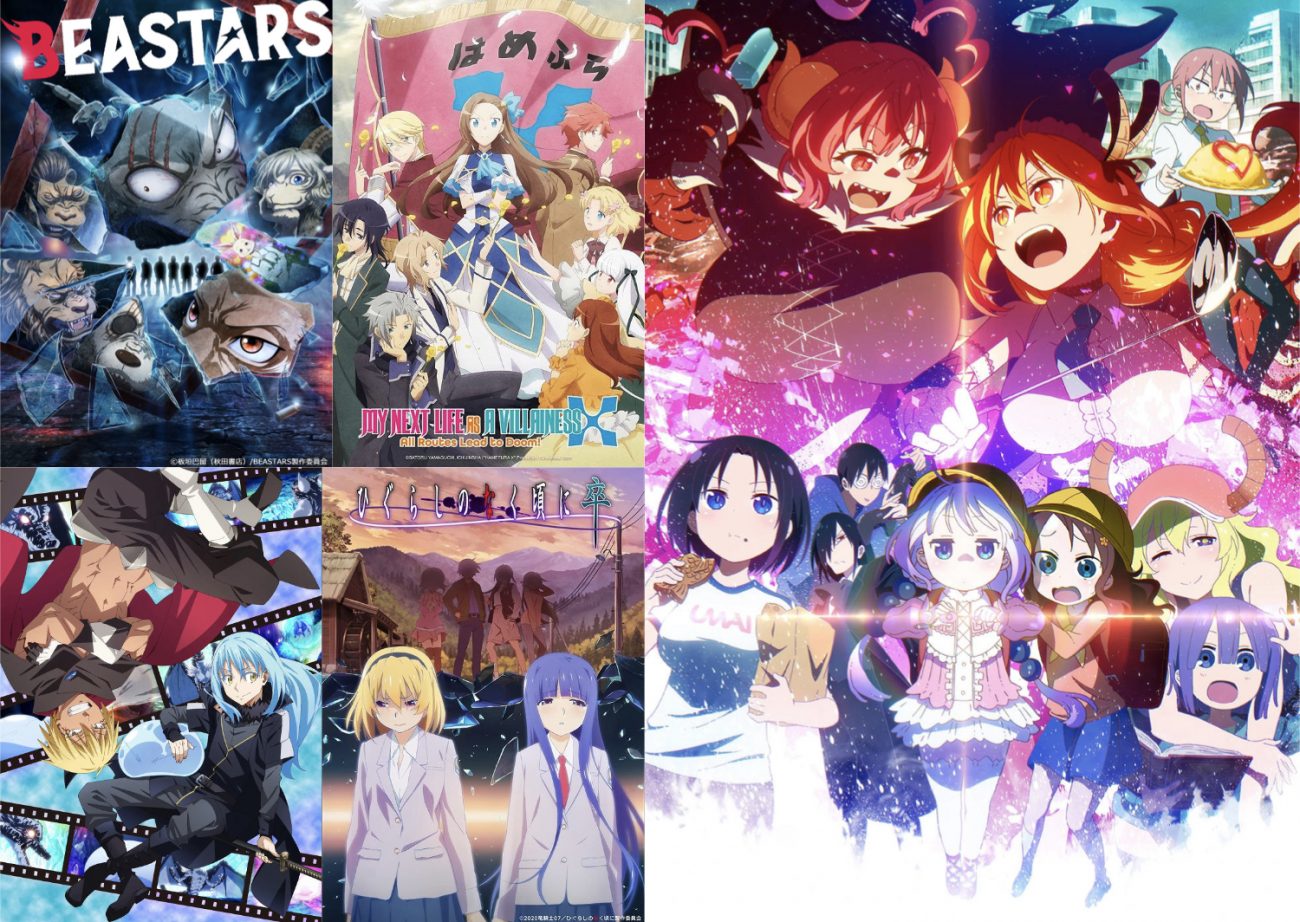 Summer 2021 gave anime fans a reason to celebrate, as some of the most beloved shows of the last couple of years finally made their return. From an anthropomorphic world dealing with bad carnivores to dragons blending in with human society, the stories that featured our favorite characters helped to beat the hot sun in the best ways imaginable. Let’s take a look and see if these new seasons of returning anime either helped to better their predecessors or — in some cases — dilute the narrative it originally created.

Higurashi: When They Cry - SOTSU 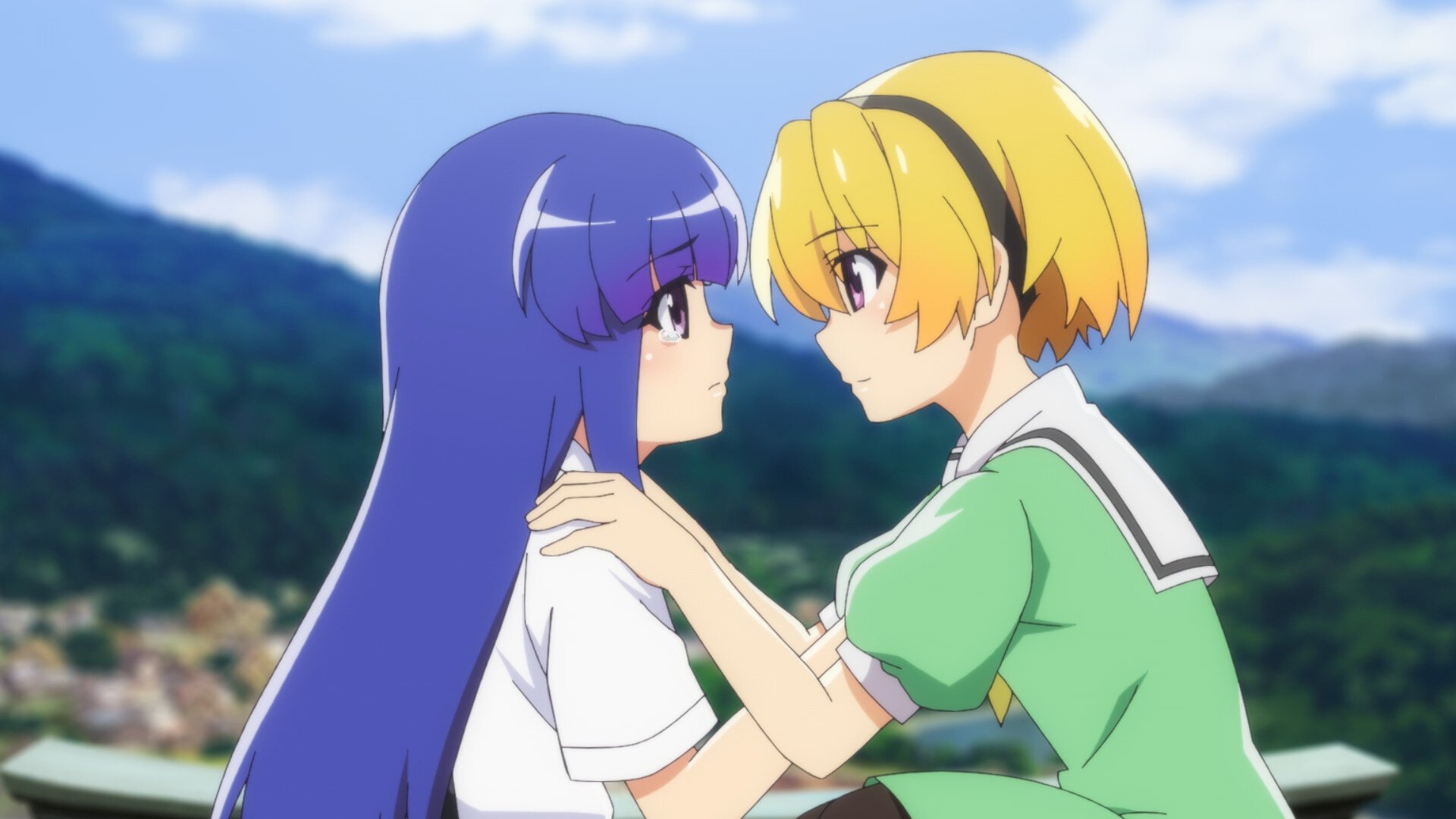 When Higurashi made its return after many years, some thought that they were in for a full-blown reboot. But as soon as the subtitle GOU was added in its second episode, fans realized that they were in for a brand-new chapter in the series. What followed were tales involving Rika helping her friends, all for the sake of having one timeline work for her benefit. But one friend wasn’t having that: Satoko, which is who SOTSU was following throughout this season.

SOTSU and GOU go hand-in-hand with one another, as this new season showcased what exactly Satoko was up to during the previous one. All throughout the narratives, the girl with the showboat-y laugh implements Oyashiro’s curse all for the sake of convincing Rika to stay in Hinamizawa and forget her dream. And as any fan of Higurashi knows, these tactics often end with a high body count.

While there were some parts of SOTSU that were rehashes of GOU, seeing everything in Satoko’s perspective did add for some interesting twists and turns. One of those was witnessing what really happened when Uncle Teppei returned to town to take care of Satoko. And believe me: I’ve never had so much fun shouting expletives at the little gremlin for what she managed to pull there! It wasn’t a perfect end to the arc, but Higurashi: When They Cry - SOTSU not only did a good job bridging the series as a whole, but also managed to sprinkling in some goodies from its Umineko spinoff. 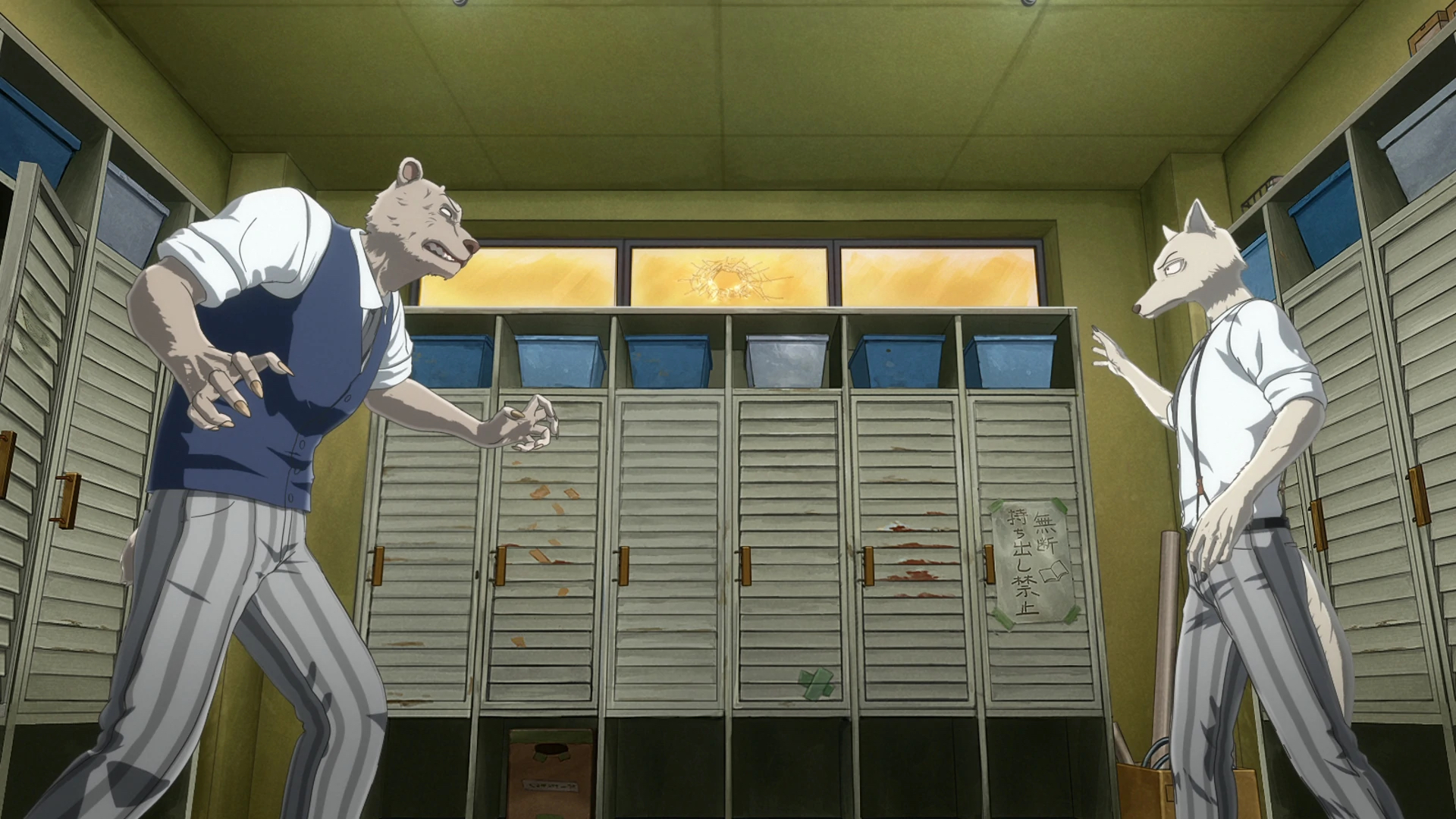 Despite its furry-inducing outward appearance, BEASTARS managed to gain quite the popularity for both anime fans and Netflix bingers alike. More than just “Zootopia, but for adults”, Studio ORANGE’s adaptation of Paru Itagaki’s manga was a deep tale about the troubles and internal battles all high schoolers dealt with. It also was a murder mystery, with the whodunnit involving Tem’s death bringing forth plenty of questions and a boatload of tension.

Season Two finally shows just who was the one behind the tragedy, as the giant bear Riz battles between how the death went down and what Tem actually meant to him. Once Legoshi figures it out, it’s a battle against time to get him both to confess and to be arrested. And to do that, Legoshi goes through a lot of grueling training both physically and mentally to prepare for the fight of his life. He also reaches out to Louis, who has his own problems now running the Shishigumi.

The romance angle between Legoshi and Haru takes something of a backseat in the second season, as the focus is placed more on concluding Tem’s murder mystery. Even though that part of the heart of BEASTARS is not beating loudly, the rest of it causes a fantastic raucous! From the fight sequences to the best English dub anywhere (with Patrick Seitz’s Riz being the voice actor’s most powerful work yet), BEASTARS doesn’t simply let its hair down in Season 2; it shaves it off to show its viewers what kind of animal it truly is!

BEASTARS can be viewed on Netflix.

That Time I Got Reincarnated as a Slime: Season Two - Part Two 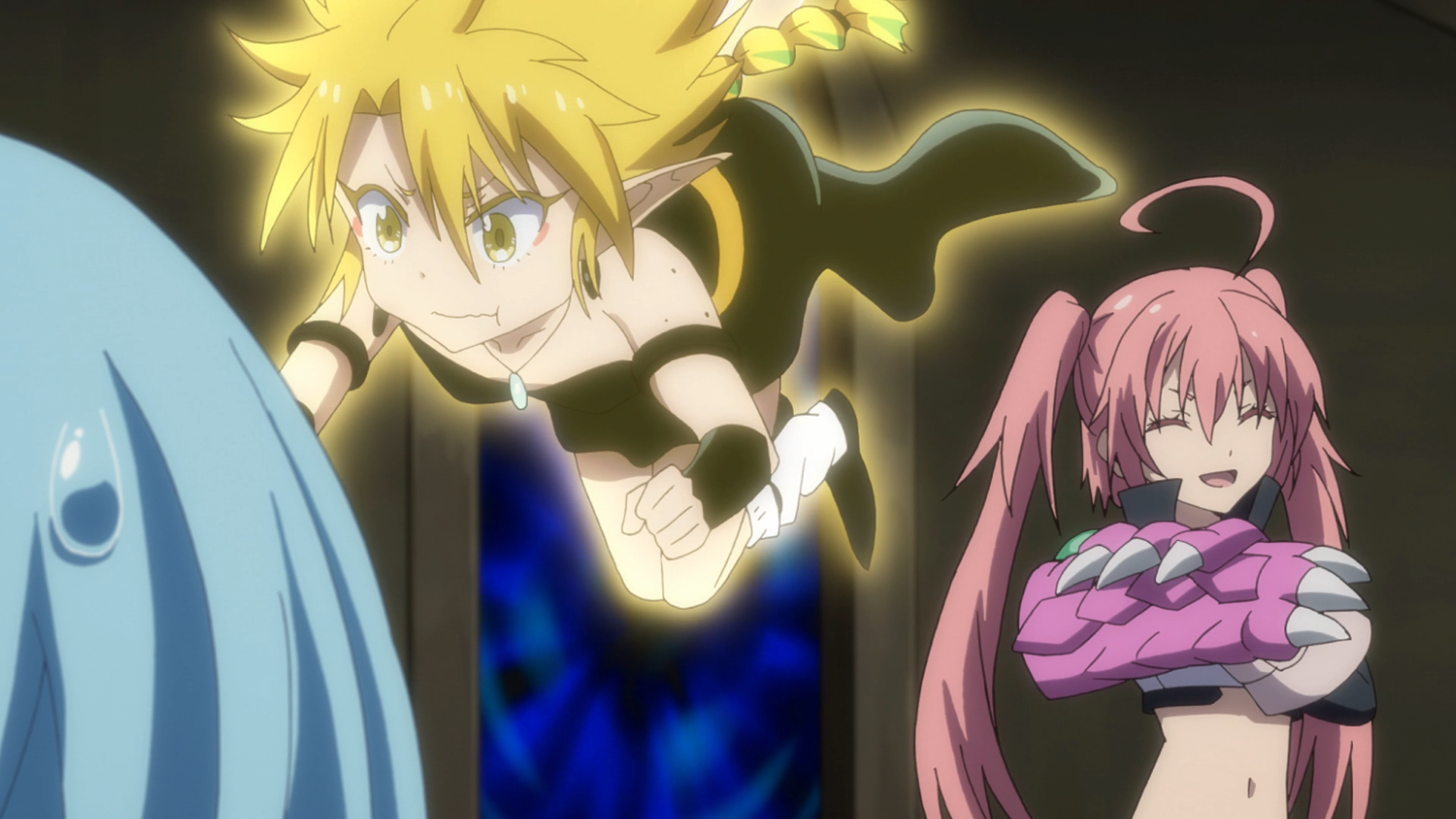 When we last left Tempest, Rimuru had become a demon lord and had awakened Veldora from within. Now comes the part of That Time I Got Reincarnated as a Slime where revenge is served in a gelatinous dessert, as he prepares to bring a fight to the demon lord banquet Walpurgis. And in order to get such a battle ready, Rimuru requires counseling. Lots and lots of counseling!

All twelve episodes of the second half of Season Two take place all within the sixth volume of Fuse’s original light novel. Over half of it is focused on the battle plan, as Rimuru and his friends plot on how to deal with Clayman at Walpurgis. While some may be bored with seeing a large gathering of people talking nonstop, it gives great insight to what goes into an actual plan to deal with a threat. It brings to mind why I loved Hideaki Anno’s Shin Godzilla, which showcased a more “realistic” approach with how to deal with a city-destroying behemoth.

But the talks lead up to a fantastic payoff, with animation studio 8-Bit going all out with the action and battles. Despite some of the fights ending far sooner than imagined, they’re sprinkled with the series’s trademark humor and heart. And when Rimuru goes one-on-one with Clayman at Walpurgis, it results in a climax that’s both satisfying and true to the That Time I Got Reincarnated as a Slime mythos. With a movie on its way next year, one can bet that Rimuru’s journey is far from over! (Until then, I’ll gladly take another season of The Slime Diaries to bide my time!)

That Time I Got Reincarnated as a Slime can be viewed on Crunchyroll, Funimation, and VRV. It has been licensed by Crunchyroll and Funimation.

My Next Life as a Villainess: All Routes Lead to Doom! X 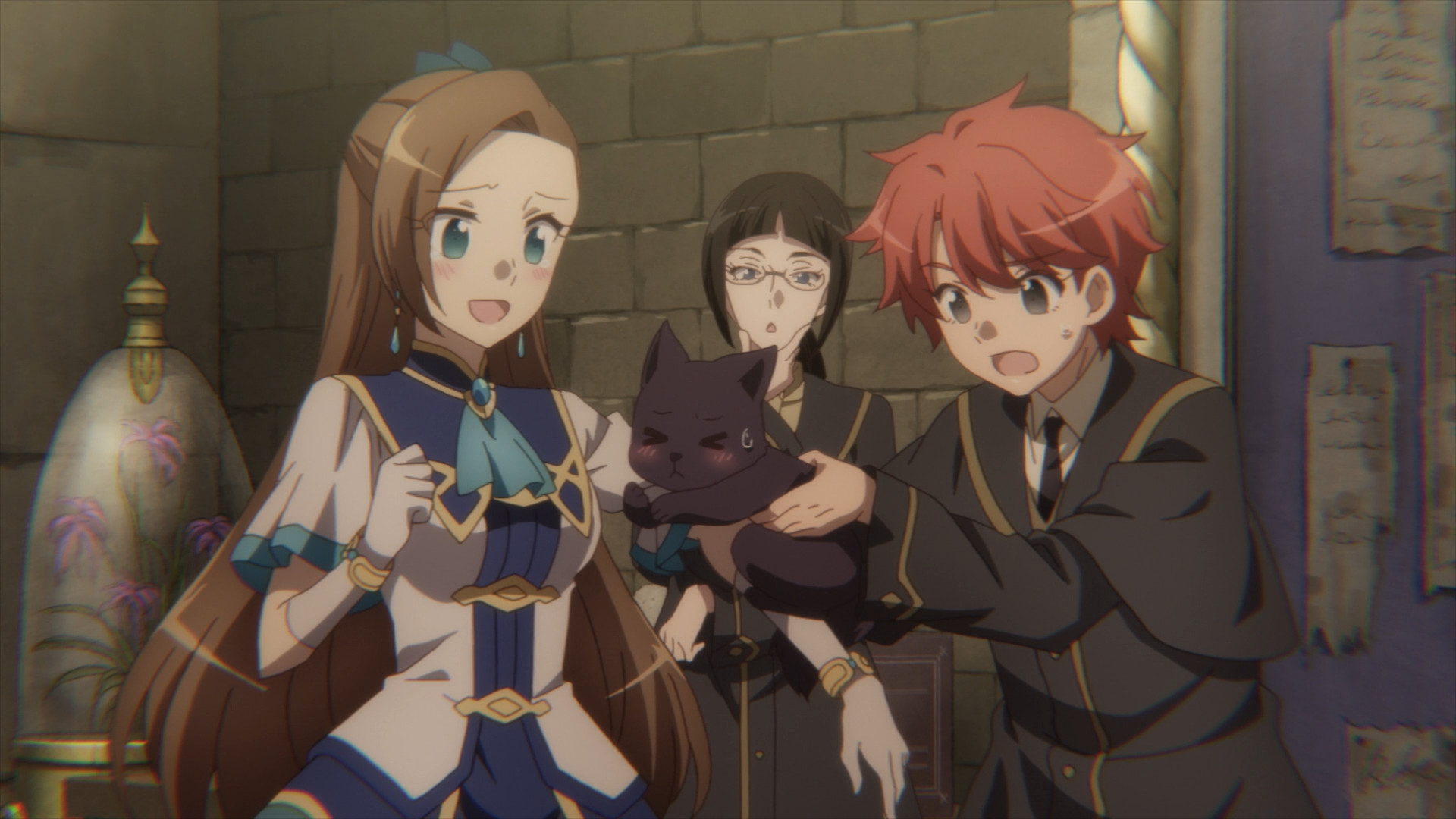 In Season One of My Next Life as a Villainess, Catarina beat the odds and avoided every trap and pathway towards her possible doom. What she didn’t realize (but what we obviously did) was that she somehow made every people in her friends circle fall in love with her. So what happens now? Well, Season Two certainly sets some things up for the woman Japanese fans like to call “Bakarina”!

New characters arrive in the form of Selena and Rufus, who first kidnap Catarina to get an understanding of what goes on in her brain. Adopted brother Keith also has a turn at being the damoiseau-in-distress, with his birth siblings attempting to bring him into the dark side. In-between, Catarina and the rest of her clique have their misadventures, from putting on a school play to being entrapped in a haunted dollhouse. And in an interesting twist, two of the men in Catarina’s life make a move on her!

While not as strong as its first season, these new batch of episodes of My Next Life as a Villainess still managed to deliver loads of fun weekly. It’s nice seeing some sort of progress made towards the characters’ affections, as shows like this often drag their feet when it comes to romantic pairings. But where the story will go after this, I’m not exactly sure. But one thing’s for certain: Catarina’s gonna need to think more for herself during her first big-screen adventure, considering she never lived to play Fortune Lover II!

My Next Life as a Villainess: All Routes Lead to Doom! can be viewed on Crunchyroll and VRV. It has been licensed by Crunchyroll. 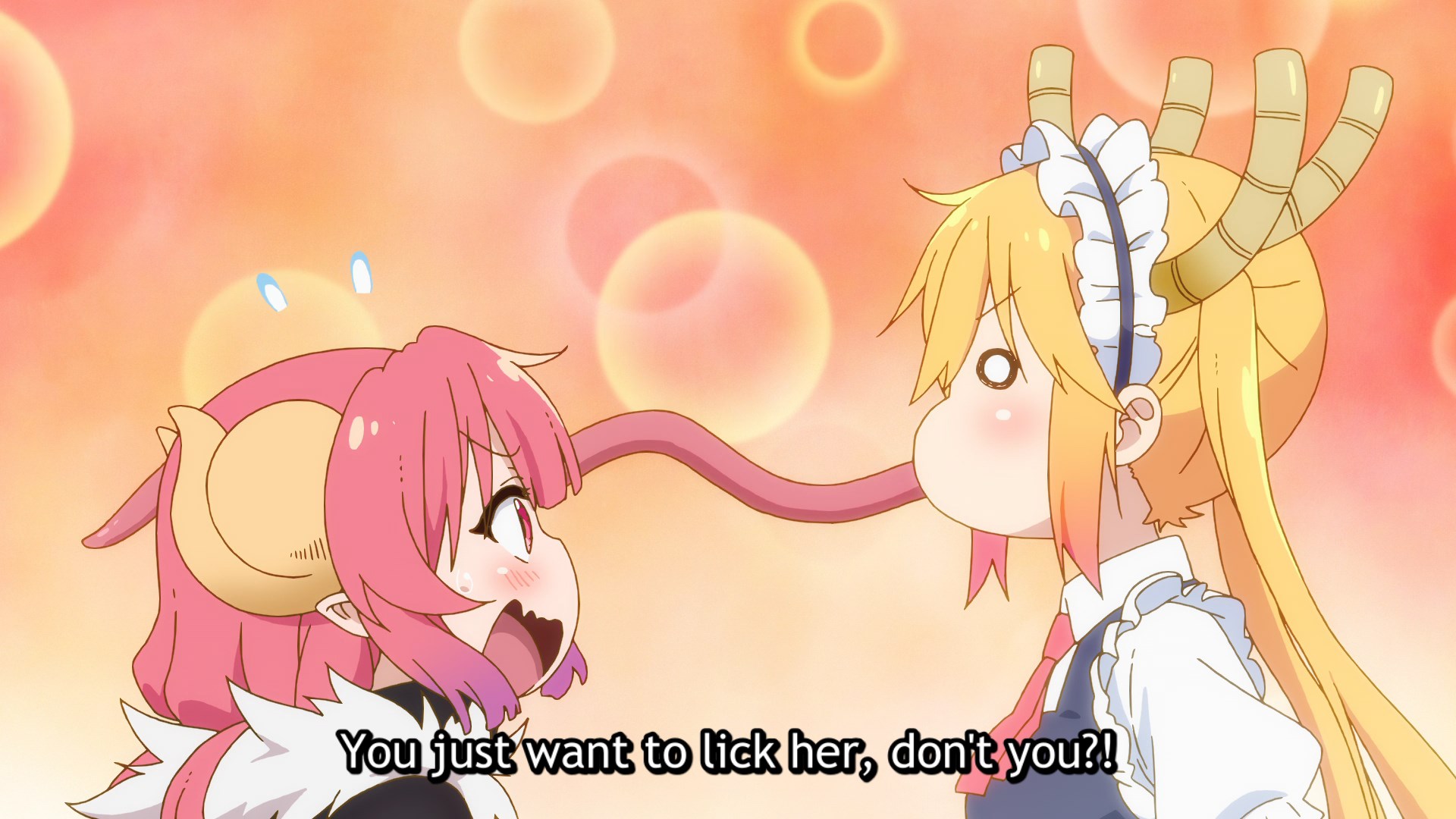 What can one say about the return of Tohru, Kanna, and the rest of the giant reptiles from Miss Kobayashi’s Dragon Maid? The first full series from Kyoto Animation since the tragic arson attack in 2019, Season Two of this comedy was just the boost of happiness every anime fan needed. How could the studio top the near-perfection of its first season? Well, for starters, we add a new dragon to the mix!

While Ilulu’s addition raised some eyebrows from those unfamiliar with Coolkyousinnjya’s original series, she fitted in well soon after taking a job at the local candy store. What followed was another tale of a dragon fitting and blending in to the ways of the human world. Sometimes it was heartfelt, as evident by her quest to find a doll’s owner. But never was it not funny, especially when it involved jokes with her coworker. 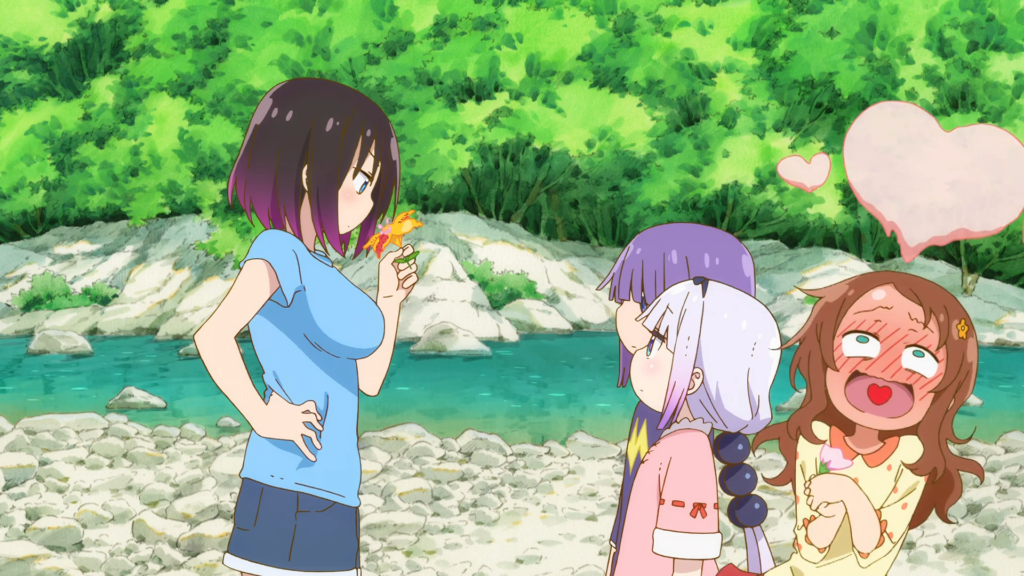 But a new character wasn’t the only thing that made Miss Kobayashi’s Dragon Maid S a phenomenal second season. Seeing the growth in the frienemy-ship between Tohru and Elma demonstrated why they truly care for one another. Fafnir takes some joys in modern gaming and writing with the aid of Takiya. Lucoa bettered her familiar skills with Shouta. Even Kanna got a taste of the outside world with an impromptu visit to New York City, giving her a bit of a break from Saikawa annoying-yet-funny affection.

But it was seeing how Miss Kobayashi and Tohru’s relationship evolved that made this the best anime return of 2021. While Kobayashi can’t seem to admit her love for the dragon, she still finds ways to show that affection in different ways. Despite Tohru’s crazy means of proving her love to Kobayashi, it’s very apparent that the human enjoys the looniness that now overtakes her life. Even better is the fact that we get some understanding of why Tohru is in the human world, with her father chiming in with some strong reasoning behind her thoughts & actions.

Season One of Miss Kobayashi’s Dragon Maid was the best series Kyoto Animation ever made; Season Two cemented that fact! No show this summer made me laugh, cry, feel, and cheer quite like the return of these wonderfully dumb and endearing dragons. As someone who reads the original manga, all I can say is that the narrative keeps reaching great heights, so one hopes they keep animating it in the future. Until then, I’ll bide my time with that unexpected video game that’s coming out very soon!

Miss Kobayashi’s Dragon Maid can be viewed on Crunchyroll, Funimation, and VRV. It has been licensed by Crunchyroll and Funimation.