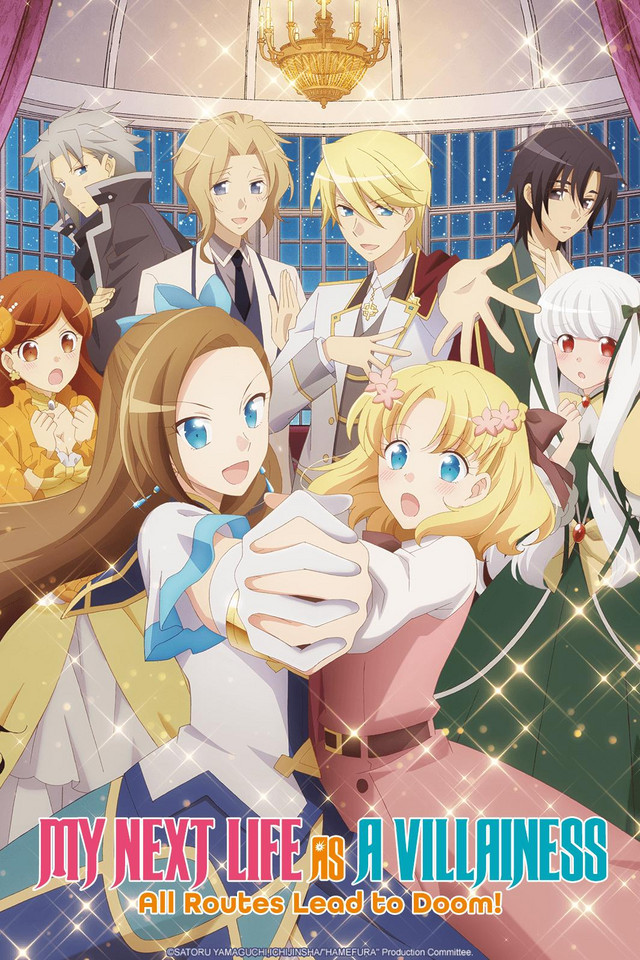 Imagine waking up to find yourself trapped in your favorite video game. The thought of interacting with your favorite characters and embarking on fun escapades runs through your mind, giving you a feeling of excitement. But then you look in the mirror, and see that you are stuck in the body of the game’s primary villain. Even worse: you know that a horrible fate awaits for this character, meaning that you’ll be forced to experience the same. What’s a person to do?

If you’re like Catarina Claes (Maaya Uchida/Jeannie Tirado) in the new anime series My Next Life as a Villainess: All Routes Lead to Doom!, then the answer is obvious: don’t become the bad guy!

Based off of the light novel series by Satoru Yamaguchi, My Next Life as a Villainess has Catarina acting all bratty and pompous, as most rich people in her era presented themselves. An unexpected fall jogs her memories, making her realize that she used to be an average 21st century student. She puts two & two together, and figures out that she has been placed in her favorite visual novel game "Fortune Lover". All fine and dandy, until she realizes that she’s the game’s villain, with a fate that either leaves her dead or exiled. 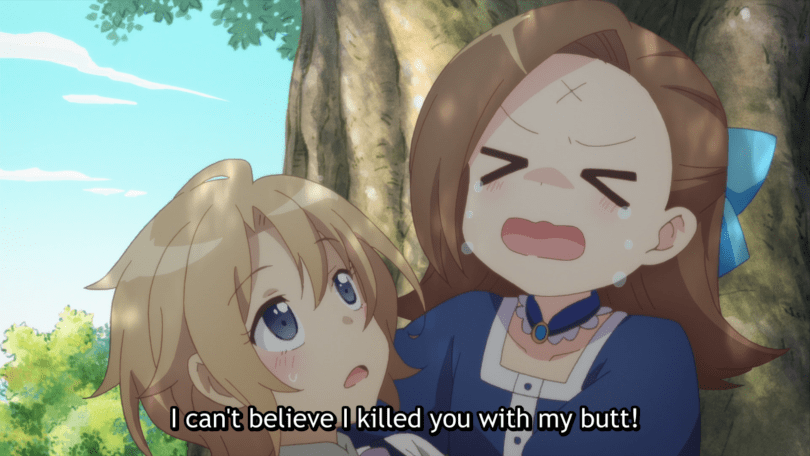 Quickly, Catarina starts mapping out every single outcome that happens in "Fortune Lover", as she attempts to avoid every sort of bad outcome that could happen. Fearing exile, she takes up gardening to learn how to grow food; fearing death, she makes sure to have an open heart to practically every one. That includes Catarina’s fiancé Geordo Stuart (Shouta Aoi/Griffin Burns), his brother Alan (Tatsuhisa Suzuki/Bryce Papenbrook), her adopted brother Keith (Tetsuya Kakihara/Griffin Puatu), and the game’s main heroine Maria Campbell (Saori Hayami/Melissa Fahn). But as she attempts to save her behind, she starts mucking with the original game’s paths.

My Next Life as a Villainess places a focus on the characters’ childhoods in its first three episodes. As Catarina tries her best to be a better sister to Keith and a fairer bride-to-be for Geordo, she already starts to mess around with the events and back stories of the “Fortune Lover” characters. This involves her becoming something of a wild girl, one that loves climbing trees, reading steamy novels, and stuffing her face with tasty food until nature calls. Oddly enough, these traits come off as charming to not just Geordo and Keith, but practically every guy and gal she crosses paths with. 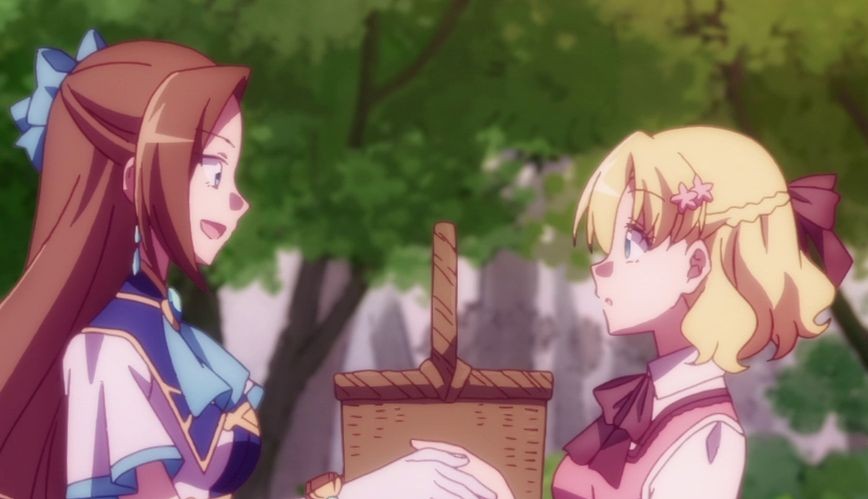 As such, the role of "Fortune Lover" protagonist starts to fall onto Catarina’s lap, as the Council of Bakarina (a group of small mental Catarinas) try to push the odds in her favor. The quest to avoid death or banishment not only succeeds, but it has the future villainess suddenly taking the lead on some of the events that would’ve pushed Maria into the arms of one of the male interests. Her antics even make the women fall head over heels in love with her, making things a little more awkward for Catarina.

It’s this aspect of My Next Life as a Villainess that keeps the story both fresh and hilarious. Although we’ve seen this happen in many other harems (or reverse harems), it’s the attitude of Catarina that keeps the antics enjoyable from start-to-finish. Her dorky mannerisms keep her from being unlikable, with her means of bonding with Maria over her sweets and with Sophia Ascart (Inori Minase/Kira Buckland) over trashy romance novels making her a beloved and funny main character. Even silly moments involving disastrous exams or having everyone sucked into a magic book are presented with a slice of charm. 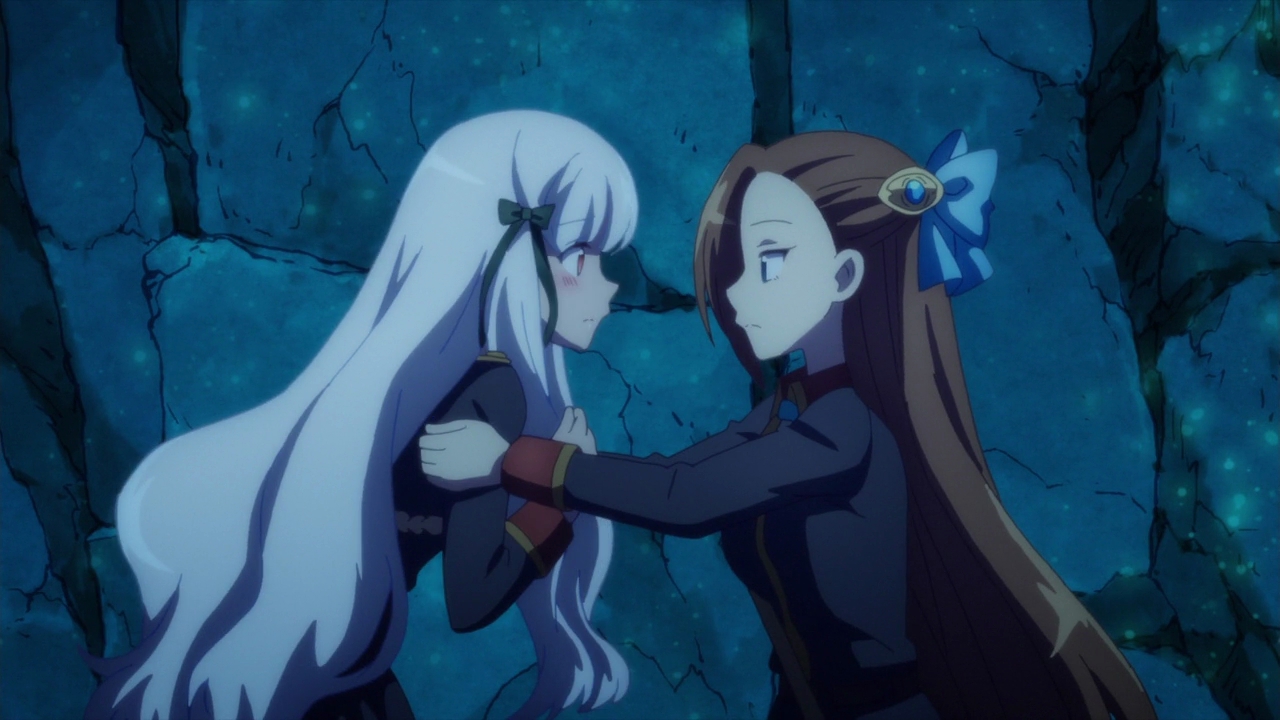 Without ruining the gags this anime has to offer, what is presented is a mixture of sweetness and hilarity. The elegance of the world wonderfully contrasts with the stupidity of Catarina, which are reminiscent of the more sillier elements of Disney’s Tangled or Frozen. Only here, the dimwitted moments are the show’s main focus, rather than a quick distraction from a story’s darker themes. In a way, Catarina’s ditzy persona makes her seem more aligned with a Star Butterfly than a Queen Elsa, something that keeps the antics goofy and feel-goody.

SILVER LINK (Non Non Biyori, Tanaka-kun is Always Listless) brings the tone of My Next Life as a Villainess to great heights. The bubbly characters surprisingly mesh well with the aristocratically fancy world. When the time comes for some physical comedy, the action is both delightful and laugh-out-loud rip-roarious. It even knows when to take the time to take in some beauty, especially when Catarina roams about the gardens and cityscapes. 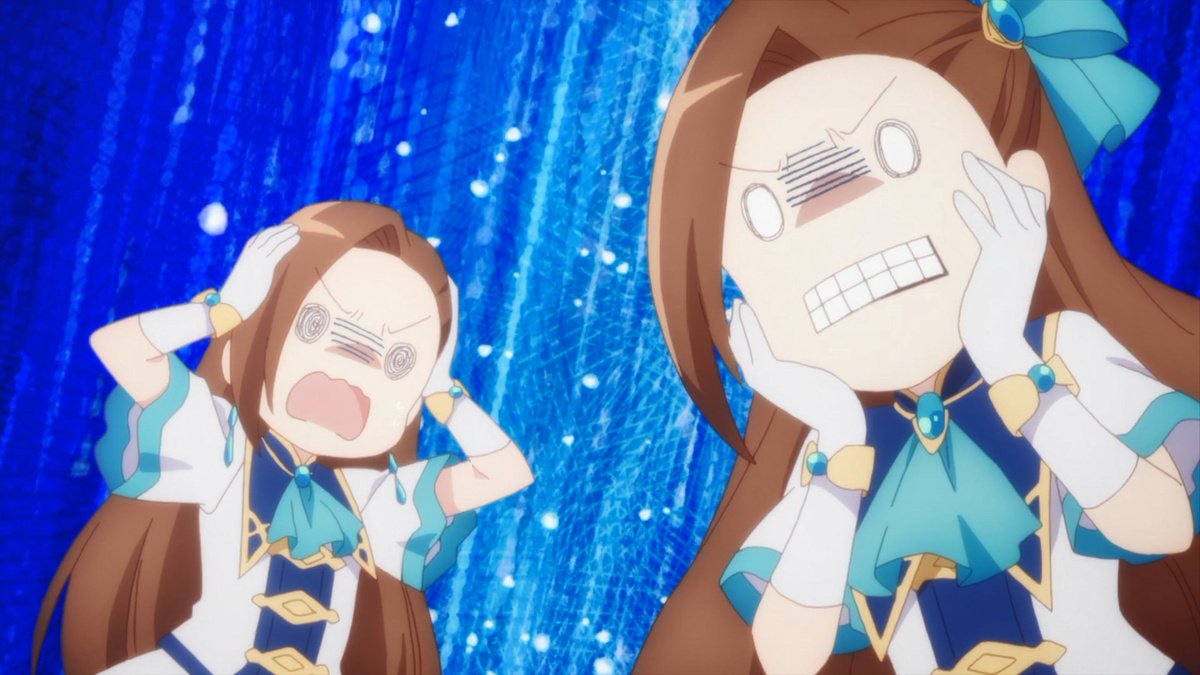 Both the Japanese and English dubs of the show bring out some solid performances, but the show certainly falls on the shoulders on whoever performs as Catarina. In the Japanese dub, Uchida has a more dorkier tone in her voice, which helps to make her a slightly sillier character. Tirado in the English dub has more elegance in her performance, but it certainly aids in boosting the comedy she delivers. The one place the Japanese dub does better in is with the kid characters, as the English dub has the younger counterparts sounding a bit too old.

The show’s score — composed by Natsumi Tabuchi, Hanae Nakamura, Tatsuhiko Saiki, Miki Sakurai, and Shu Kanematsu — is wonderfully classical, fitting well with the show’s timeframe. Not only does it do well with showcasing the elegance of the characters’ realm, but punches up the wacky comedy that is delivered often throughout. Opening theme “Otome no Route wa Hitotsu Janai!” by angela is over-the-top and a pure delight, as its operatic vocals contrast with its silly tone. Geordo’s voice actor Aoi takes the reins of the end theme “Bad End”, but despite the song showcasing his impressive range, the overall melody contrasts with the personality this anime delivers.

It has honestly been some time since the isekai genre has delivered something truly original. Despite falling for a usual trope or two (which, yes, includes Catarina’s true self being trucked to death), My Next Life as a Villainess brims with uniqueness at around almost every corner. It’s hard to predict whether or not Catarina will 100% succeed in the end, but from what we’ve seen thus far, My Next Life as a Villainess: All Routes Lead to Doom! has already made her a winner in the eyes of anime fans everywhere!

My Life as a Villainess: All Routes Lead to Doom! can be viewed on Crunchyroll and VRV. It has been licensed by Crunchyroll. Episodes 1-8 were observed for this review. Promotional consideration provided by Ellation.