HomeAnimeANIME REVIEW | Everybody Ought to Have A "Dragon Maid"

ANIME REVIEW | Everybody Ought to Have A "Dragon Maid" 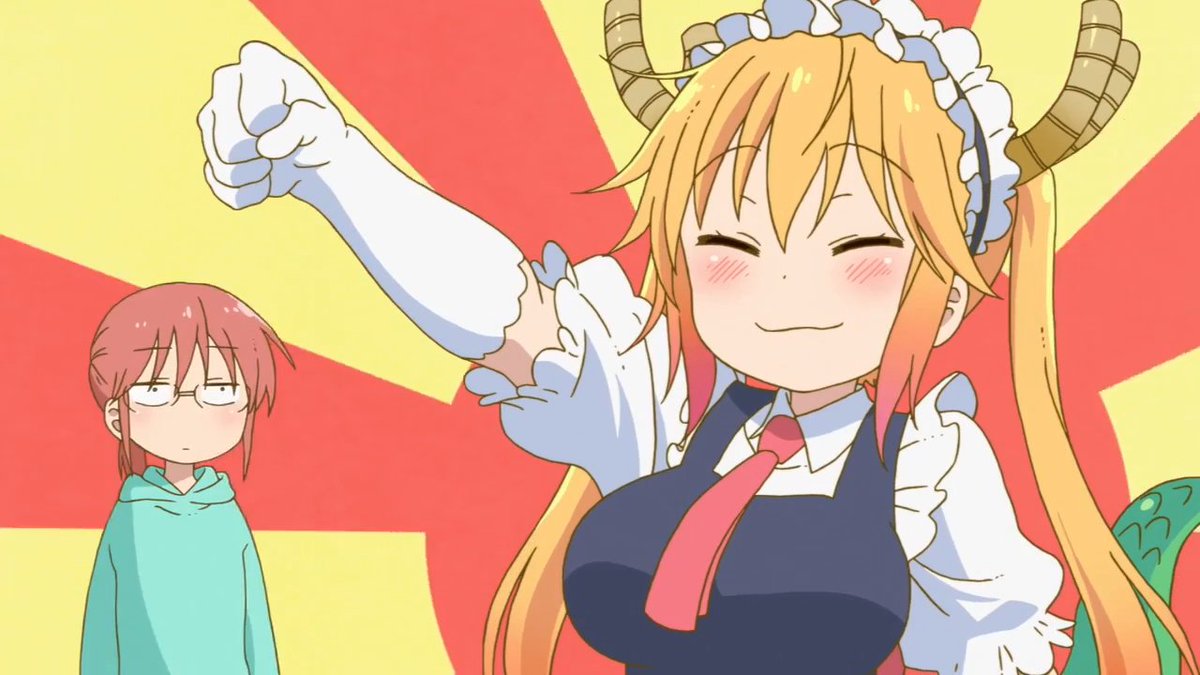 ANIME REVIEW | Everybody Ought to Have A "Dragon Maid"

Who doesn't love dragons?! They're big, ferocious, protective, and they make the most fantastical stories far grander than they could be without them. Dragons can also be pretty cute, as evidence from the likes of Toothless and the other beasts of How to Train Your Dragon. However, if there's one thing Japan is really good at, it's one-upping the cute ratio in the most imaginative ways. So how do you make a dragon far more adorable? Simple: make them also a maid girl, just as Kyoto Animation has done with Miss Kobayashi's Dragon Maid.

Based on the popular manga series by Coolkyoushinja, Miss Kobayashi's Dragon Maid starts out with our title character (Mutsumi Tamura/Leah Clark) waking up from a hangover. Upon opening the door, she is greeted by a massive dragon, who quickly transforms into a maid girl. The dragon Tohru (Yūki Kuwahara/Sarah Wiedenheft) reveals that Kobayashi rescued her from impending death, and offered to let her live with her in her apartment. Naturally the still-hungover office worker wants no part of it, until she discovers how handy Tohru is around the house. 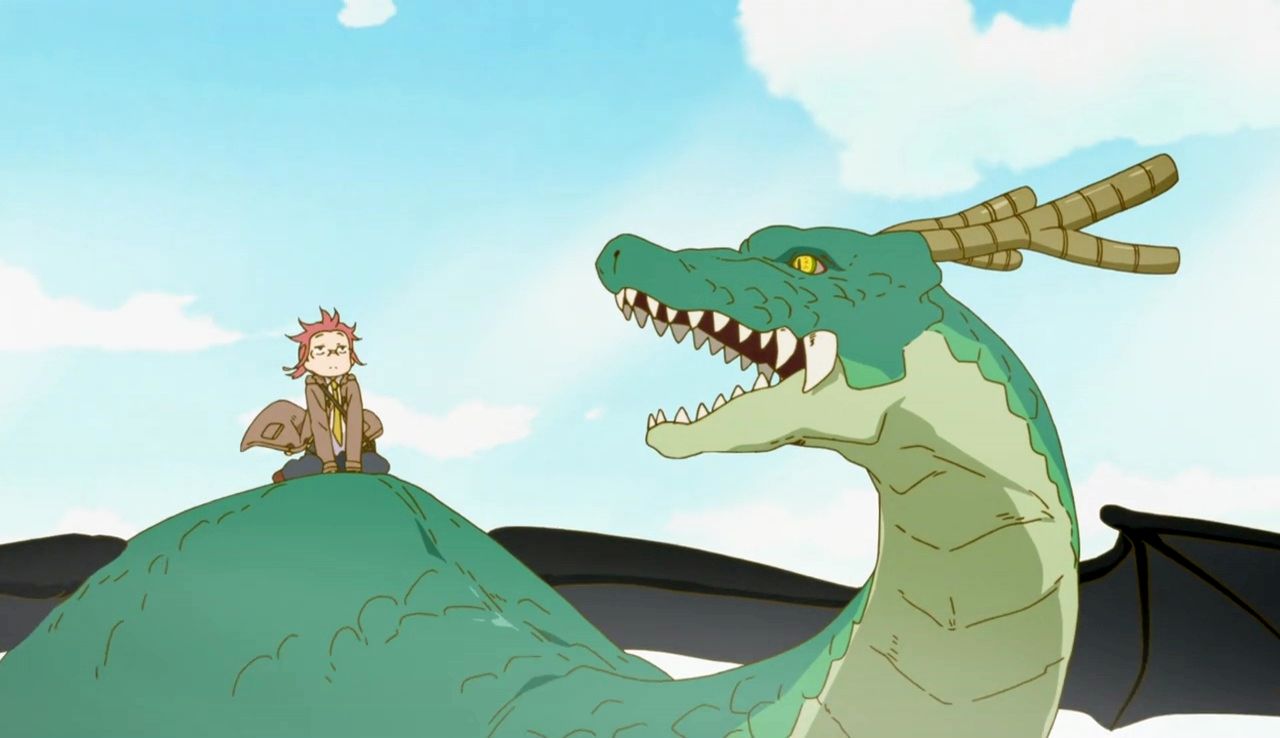 Of course, Kobayashi also sees some of the flaws of Tohru, from attempting to wash clothing with her saliva, dealing with strangers at the door, and even doing something so simple as cleaning a room. However, Kobayashi quickly sees that the good Tohru can accomplish outweighs the bad, as the out-of-place dragon maid learns from her mistakes and the ways of the human world. Soon other dragons such as Kanna (Maria Naganawa/Jād Saxton), Lucoa (Minami Takahashi/Jamie Marchi) Fafnir (Daisuke Ono/Garet Storms), and Elma (Yūki Takada) enter the real-world, with Kobayashi left wondering where her normal life fluttered off towards.

What makes Miss Kobayashi's Dragon Maid stupendous is its means of taking a ridiculous concept and grounding it with some real-life situations. We're already lead into the show knowing that this is meant to be an incredibly wacky tale, so it's surprising when you see them put a lot of pure heart into these characters. Even the romance aspect (despite it currently being one-sided) between Tohru and Kobayashi is done so in a way that's somewhat cemented into reality. And as the two characters slowly get to know one another, the more their feelings and emotions open up towards what will hopefully be a positive romance. 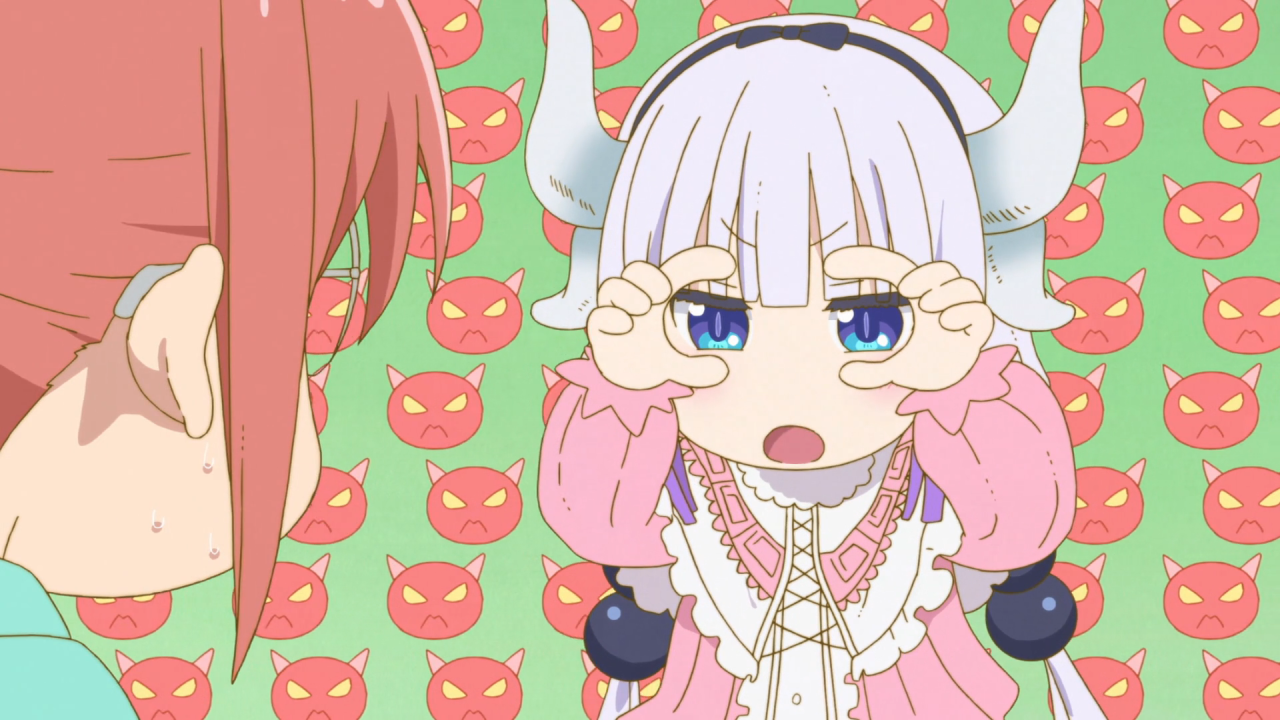 Thankfully, the show is also incredibly funny. Fafnir goes from hating all humans to bonding with Kobayashi's otaku coworker Makoto (Yuichi Nakamura/Jeff Johnson) over video games and manga in one of the funnier 180° character changes this season. Watching as Lucoa accidentally traumatizes Shōta (Kaori Ishihara) with her, um, mere presence is also laugh-out-loud funny, with the young mage thinking that she's a succubus sent to wreak havoc on his life. Meanwhile Tohru herself finds new ways to be a hassle, be it from learning parlor magic tricks despite already being a magical creature to causing some necessary shenanigans secretly at Kobayashi's workplace.

Lastly, there's Kanna, who is currently battling Hikari from Interviews with Monster Girls for the title of cutest character of the year. Whether as she's mesmerized by school accessories or playing the watermelon-smashing game at the beach, the series finds new and creative ways to make her adorable. Even her friendship-bonding with fellow classmate Riko (Emiri Katō/Sara Ragsdale) builds up towards some huge laughs...to a point. (Let's just pretend the Twister game scene in Episode Six never happened, okay?) 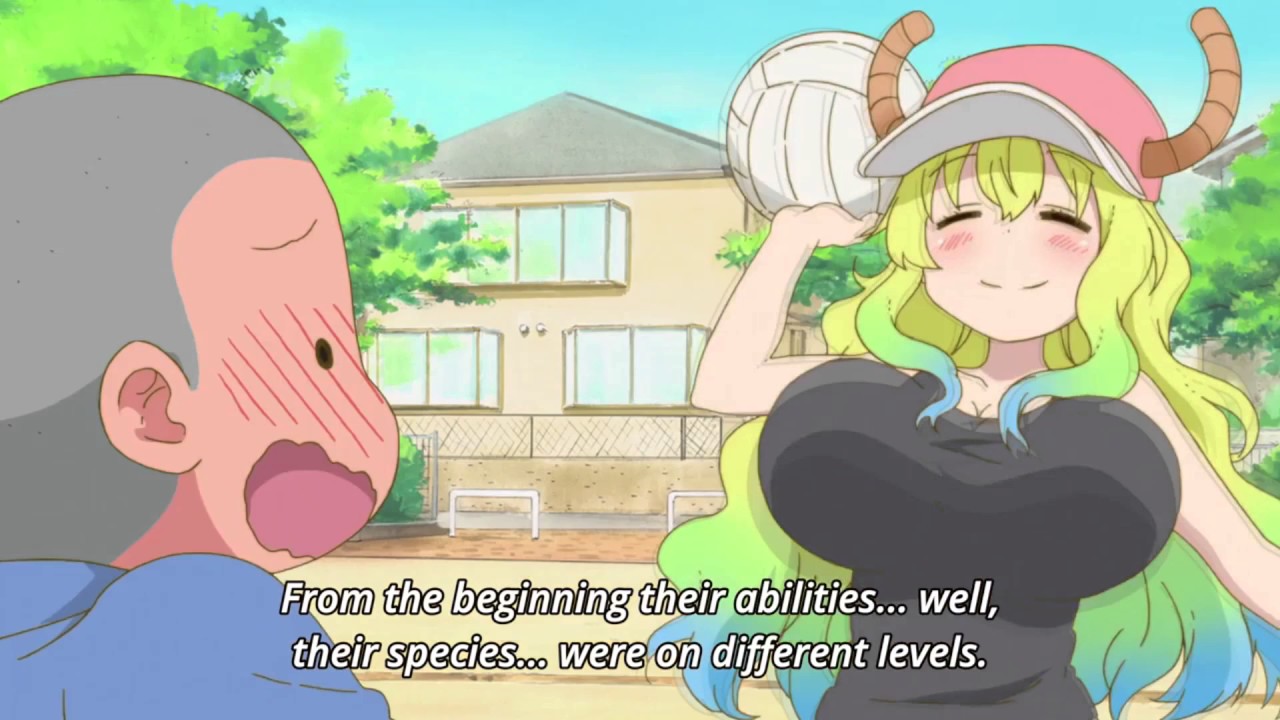 It's when we get to see the dragons go full-blown crazy when the biggest laughs occur. A great example of this is in the dodgeball scene in Episode Four, where Tohru and the gang help Kanna and Riko deal with some playground bullies in a rough-and-tough way. It could've ended simply with the kids learning a very important lesson, until the dragons decide to have a game of their own. What happens next is one of the funniest scenes you'll witness in anime this winter, despite most of the action happening off-screen.

Kyoto Animation has done a bang-up job with bringing Coolkyoushinja's manga to life. Everything in this anime is filled with loads of unique personality. The characters are incredibly expressive and animated with the right amount of cartoonish ebb & flow. Its worlds are always colorful, even when nighttime hits Kobayashi's vicinity, with a dash of warmness and watercolor-like personality in the buildings and natural surroundings. Honestly, I haven't seen a Kyoto Animation production look this good since either Nichijou or the first season of The Melancholy of Haruhi Suzumiya. 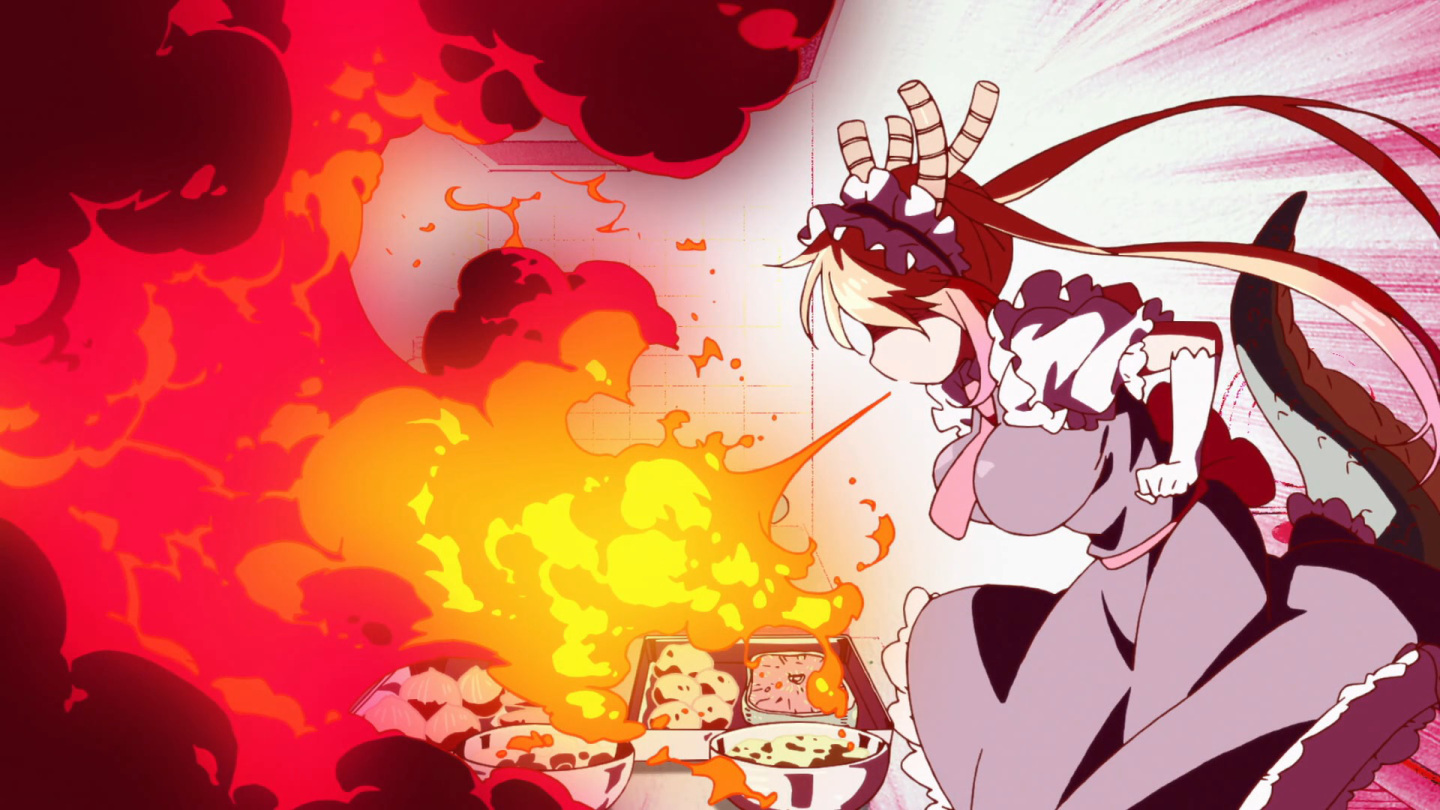 The duo of Tamura & Kuwahara as Kobayashi & Tohru builds a strong straight man/comic performance, with Kuwahara upbeat personality working well with Tamura's deadpan one-liners. Naganawa voices Kanna in the cutest of ways, adding a sort of kid-like mesmerization to everything she experiences. Ono's Fafnir builds up a cold-hearted nature, one that comically stays with him even when he finds himself enjoying in the human life. Meanwhile, Nakamura's Lucoa is presented with a humorous dumb blonde stereotype, which works during her most silliest of moments of the show.

Funimation's English dub does a surprisingly well-done job with capturing the same personalities as the Japanese counterpart. Clark’s Kobayashi captures her long work-day strain wonderfully, as well as her frustrations with some of her new friends’ actions. As Tohru, Wiedenheft gets her perky attitude down with a cutesy can-do attitude. While Saxton’s Kanna is cute, it’s a bit more brattier than Naganawa’s interpretation. Storms’s Fafnir is the right amount of anger and sinister, although it’ll be interesting how he’ll change as the character gets used to his surroundings. Overall the dub script itself is translated very well, although a line in Episode One changes the character dynamic between Kobayashi & Tohru in a way that'll make fans a little upset. (Here’s hoping they fix it before the Blu-Ray release.) 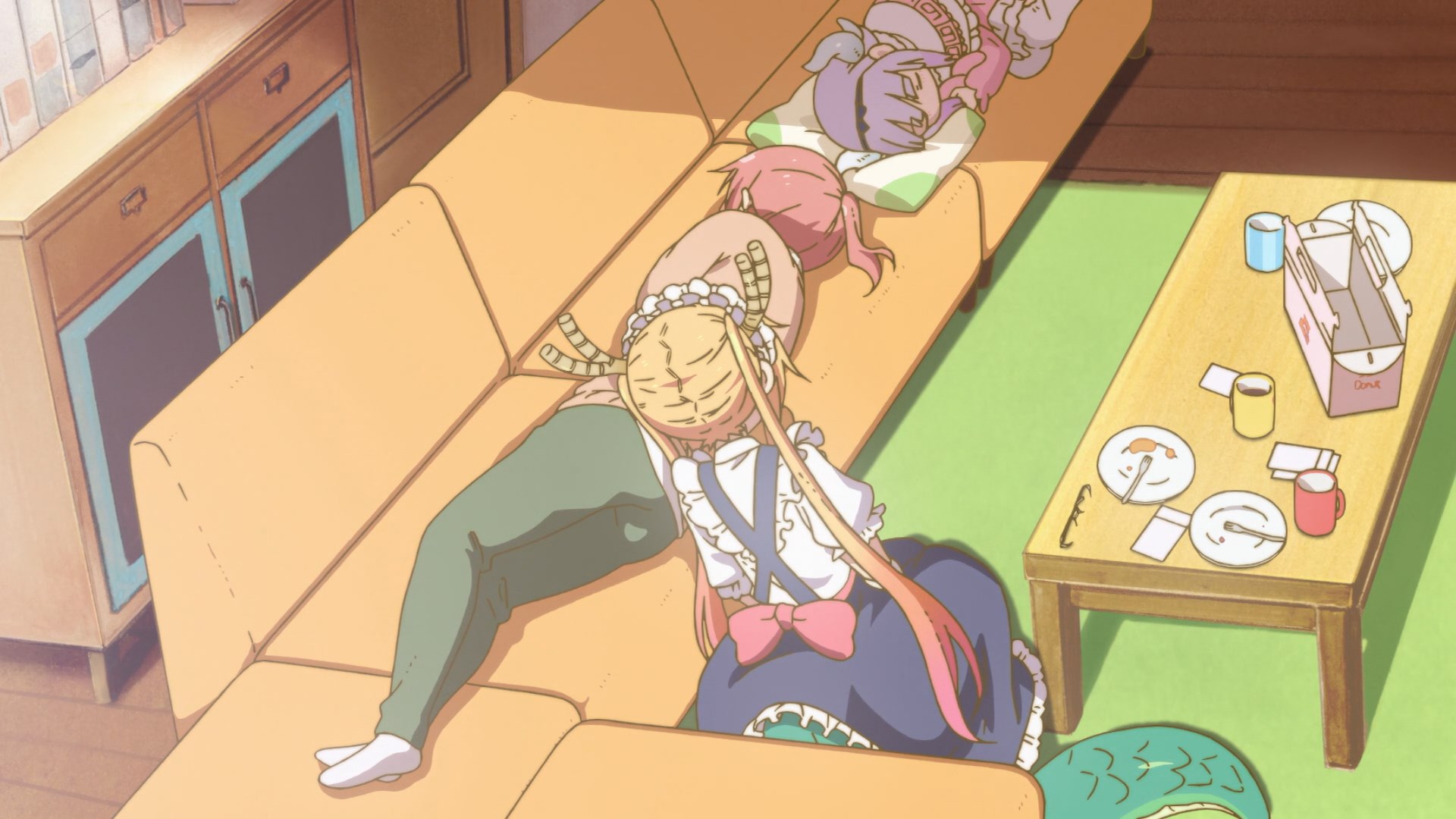 Masumi Itō's (momokuri, Flip Flappers) score is filled with both childlike wonderment and heartwarming emotions. Like a blend of traditional French and Jewish melodies, the music that plays throughout has a way of making viewers crack a smile with a mere couple notes. Fhána's "Aozora no Rhapsody" has the potential of being this year's best opening theme, with its catchy disco/folksy vibes engulfing the ears and injecting pure joy into them. Closer "Ishukan Communiucation" by the female dragon cast bookends the show with the right amount of gladness and love, perfectly capturing the spirit of Tohru, Kanna, and the rest of the happy-go-lucky dragons.

Miss Kobayashi's Dragon Maid puts Kyoto Animation back on their A-game. With its top-notched cast, cleverly funny story-writing, and surprisingly heartfelt character development, the tale of a young office worker and her lovey-dovey reptilian live-in maid is easily this season's must-watch program. Simply put, Miss Kobayashi's Dragon Maid is one of the finest, most original comedies you can experience this winter. Embrace this lesbian dragon with all your might, and cross your fingers that it gets more than one season in the long run.

Miss Kobayashi's Dragon Maid can be viewed on Crunchyroll & Funimation, and has been licensed by Funimation. Episodes 1-8 were observed for this review. Promotional consideration provided by Crunchyroll.