HomeAnimeANIME REVIEW | Rimuru’s Guide To Life in "The Slime Diaries"

ANIME REVIEW | Rimuru’s Guide To Life in "The Slime Diaries" 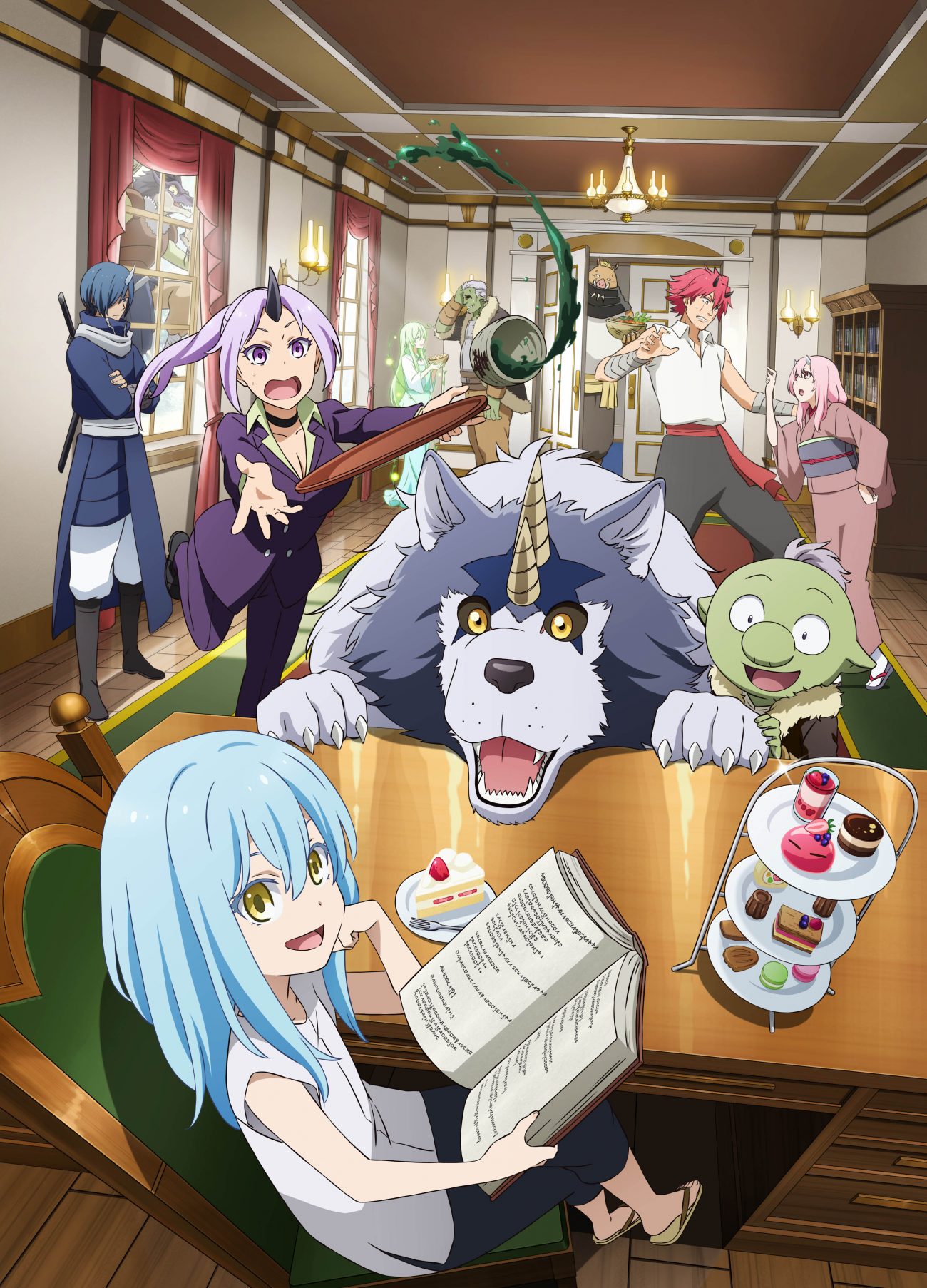 ANIME REVIEW | Rimuru’s Guide To Life in "The Slime Diaries"

When I think of an isekai series that gets practically everything right, That Time I Got Reincarnated as a Slime is usually the one that tops my list. The story of Rimuru’s (Miho Okasaki) rise from meager slime monster to king of a multicultural land is filled with fantastic character development, memorable action, deep drama, and side-splitting comedy. But what happens on the days when Rimuru’s not busy leveling up or making deals with neighboring kingdoms? That’s where the spinoff series The Slime Diaries comes into play.

Unlike That Time I Got Reincarnated as a Slime, The Slime Diaries takes a more laid-back approach to the narrative. Viewers follow Rimuru, Gobta (Asuna Tomari), Shion (M.A.O), Benimaru (Makoto Furukawa), Milim (Rina Hidaka), and the rest of the citizens of Tempest as they do their daily routines. From planting vegetables and having fun beach activities to trying to get Rimuru in more feminine clothes, the series puts a bigger focus on the more fun things in the fantasy world life rather than the more serious elements. And in a sense, the characters are added more depth and growth because of it. 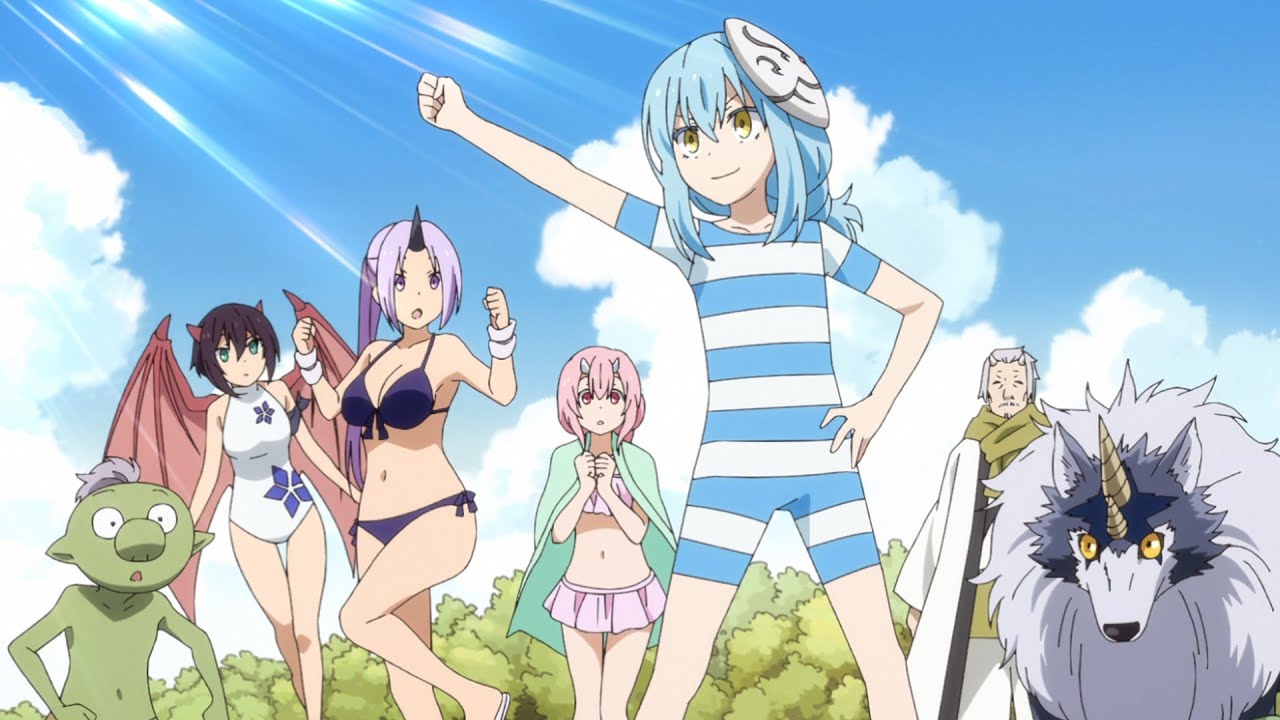 The Slime Diaries is what would happen if you took the main series and placed the soul of Flying Witch into its heart. Watching as Rimuru bonds with his citizens and having fun with them is a delightful breath of fresh air in a series that — during its second season — was filled with a lot of heartache. While the main series has a good chunk of comedic moments, it’s here in this spinoff where we can see these characters go buck wild with their wackier sides. And yes, that does include some of the more serious characters in the series.

What makes this spinoff great is how these characters interact with one another. We get that everyone in Tempest has bonded together in a harmonious way, as evident by what viewers saw in Season One of the main series. However, with there being a bigger focus on comedy in this series, those bonds are clasped together in the most hilarious of ways. The best example of this is when we see Rimuru and Gobta together, as the goblin kid becomes something like a big brother to the slime king. Be it through shopping, training, and indulging in perverted antics, these two feel more akin to being blood siblings than anything else. 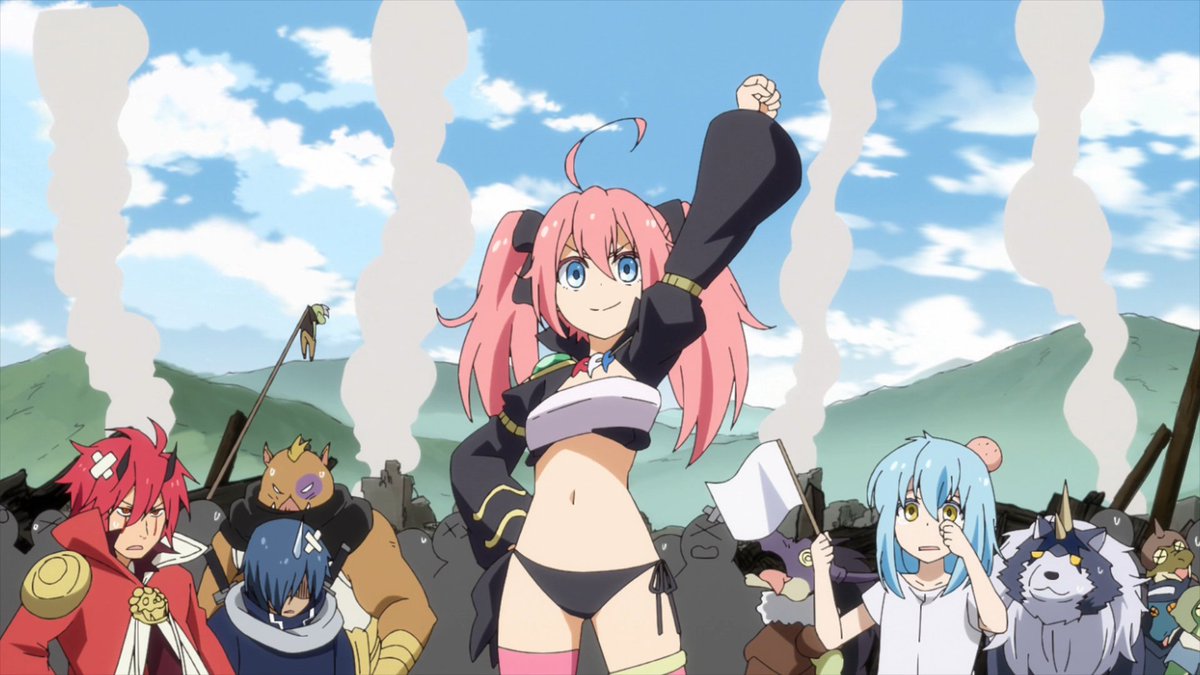 Of course, Rimuru has a tight bond with plenty of the people in his kingdom. From knowing how to keep Shion from the kitchen to running away from Shuna (Sayaka Senbongi) when she wants to dress him in a bunny girl outfit, the slime has a knack to know when to take action, even when he can’t escape from certain duties and the like. Even when Demon Lord Milim shows up, Rimuru knows how to keep her at bay...for the most part. (Let’s just say that her destruction in the village makes for a long-ass bill.)

It may not come off as much of a surprise, but when it comes to the comedic chops, no one does it better than the resident Lizardmen of Tempest. Soka’s (Rumi Okubo) infatuation with ogre Souei (Takuya Eguchi) is not just funny to watch unfold, it’s utterly adorable! Her reaction to the Lizardman chief Abil (Tomoyuki Shimura) attempting to set her up with a man also brings loads of laughter, especially with her reactions to the dating profile pics. Dating apps may not be a thing in this fantasy world, but her glare at these “respectable” suitors screams “swipe left”! 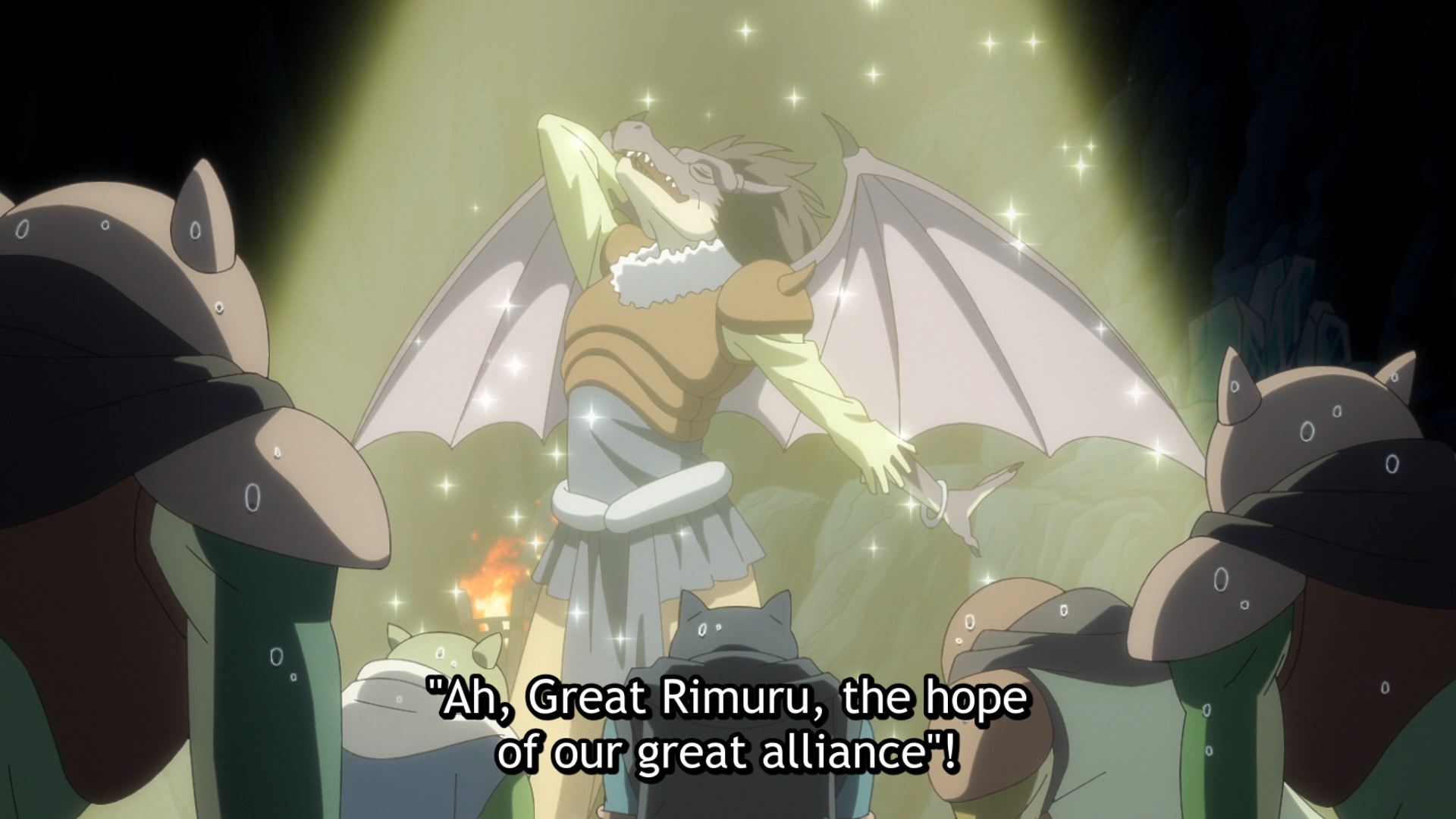 But no, the real bringer of laughs continues to be Gabiru (Jun Fukushima). Whether it’s performing a song singing his praises or attempting to wage a battle during a summer festival, the “supreme” Lizardman has all flair and no spine when it comes to his presentation. Kazuma Sato may be Fukushima’s greatest comedic role, but what he brings to Gabiru comes close to hilarious perfection. He’s a loser for sure, but you can’t help but love the energy he brings into a room.

When it’s not about the laughs, The Slime Diaries instead focuses on the breathers life gives us. A relaxing barbecue at the beach, a gaze at the stars during a gorgeous night, and watching a beautiful fireworks display are presented with an aesthetic that’s quite soul-soothing. While more of a slice-of-life than an iyashikei, this spinoff knows when it time to get comfy after a round of belly laughs. It’s a testament to the talents of returning animation studio eightbit, who this time bring an Encouragement of Climb tone to the beauty that can be found in Tempest. 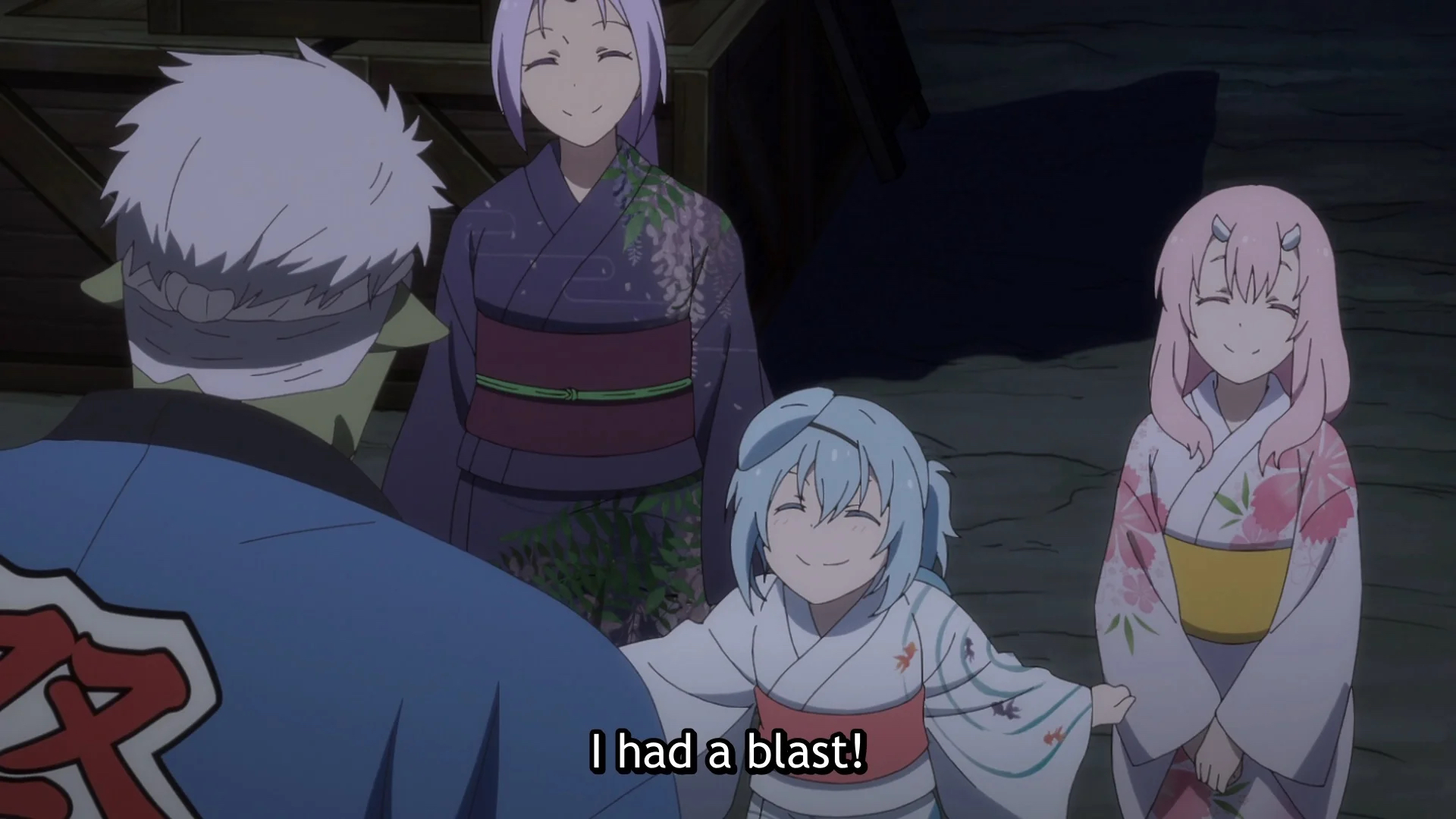 Returning to compose the music to this spin-off, R.O.N. focuses more on sillier and comforting melodies that fit its tone strongly. Opening theme “Brand new diary” by Akane Kumada is a fine pop rock tune that indulges on the fun and exciting days in store with Rimuru and his pals. But it’s the two ending theme that wonderfully bring the mood of this series out: the lullaby-like “Oyasumi, Orange” by Okasaki, and the joyfully rowdy “Kamoma Tempest” by the primary cast of the show. The latter is by far one of the most delightful anisongs of the season, as it brims with pure joy from start-to-finish!

Despite my love for That Time I Got Reincarnated as a Slime, I can’t help but enjoy The Slime Diaries even more. Its slice-of-life approach makes it impossible not to love every moment that flashes on this screen. Filled with plenty of laughs and some beautiful heartfelt moments, The Slime Diaries not just adds depth to That Time I Got Reincarnated as a Slime, but also gives it more warmth than you could imagine. If the main series ever had to take a long break (which it won’t, seeing as the second half of Season 2 arrives this summer), then The Slime Diaries would be a more-than-suitable replacement to bide my time.

The Slime Diaries can be viewed on Crunchyroll and VRV. It has been licensed by Crunchyroll. Episodes 1-8 were observed for this review. Promotional consideration provided by Ellation.