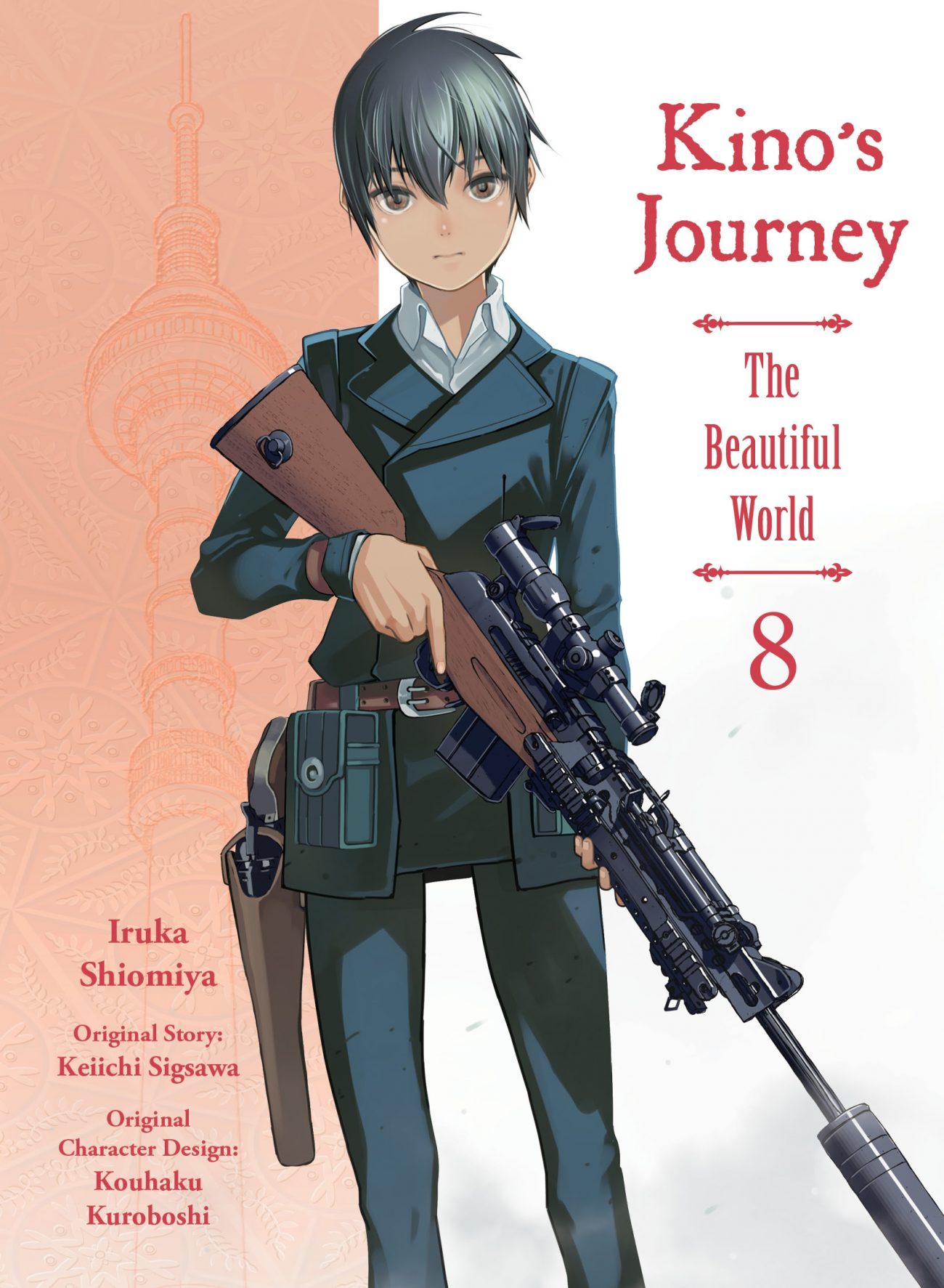 All great adventures must end some day. In the case of Iruka Shiomiya’s manga adaptation of Keiichi Sigsawa’s Kino’s Journey: The Beautiful World, that destination has been reached. After many highs and lows in the series, does Kino’s adventure end things on a great note? The answer, like most of the places Kino visits in the series, is a little bit more complicated.

The eighth and final volume of Kino’s Journey: The Beautiful World tells the story of “The Land of Ships”, where the other adventurer Shizu and his talking dog Riku takes center stage. Both travelers aim to roam a land that they’ve never been to, which requires them to journey on a massive ship the size of a metropolis. Instead of living in the tower of luxury, Shizu and Riku decide to live with the poor commoners, in order to gain some level of work experience. But when a mysterious girl named Ti starts to hang with Shizu, he begins to find things weird about his surroundings.

It’s when he finds that the commoners will be in danger many years from now when he attempts a coup on those living in the tower. Shizu is then greeted with a very-well trained marksman under mask and cloak. But during the fight, Shizu realizes just who is in the disguise: Kino themself. Thus after a well-fought duel, the two journey-people team up to take down those who call the tower their kingdom.

This final volume of Kino’s Journey: The Beautiful World is a slow burn. Watching as Shizu and Riku adapt to their new surroundings isn’t exactly entertaining, but it has its interesting tidbits here and there. The addition of Ti makes for some cute one-sided bantering, but it never reaches that wow factor that past volumes of this series have delivered. When Kino finally shows up, the excitement does turn up just a tad, but it lacks that jaw-dropping reveal that past chapters had delivered.

Because of this, the conclusion to Shiomiya’s manga adaptation can be underwhelming. As the original light novel series currently stands at twenty volumes, there could have been another story in there that could’ve served as a better end point for the manga. In fact, I would even argue that Volume Seven had a much more satisfying cut-off point than what is seen here. Ending things with the titular character playing second banana to the okay side-story protagonist feels like a cop out in some way.

And yet, even with this mundane ending, I can’t help but still recommend Kino’s Journey: The Beautiful World. Volumes One through Seven deliver some amazing narratives, many of which will make you reflect on real-world issues that mirror the situations Kino’s placed in. There are moments that’ll make you laugh, cry, feel anger, and even inspire you to make a journey all on your own. Despite the Beautiful World part of the title coming off more sarcastic as the story drove onward, it still showed off something truly gorgeous.

With all of that placed into consideration, Volume Eight of Kino’s Journey: The Beautiful World takes an amazing adventure, and runs out of gas right before the final destination’s reached. But it comes so close to crossing that finish line, to the point where you could just get out of your vehicle and take a quick walk to cross it. However, leaving the vehicle means certain death, so you have no choice but to sit tightly until help arrives. Maybe Shiomiya will come around again to adapt more in the future, but for now, you best hope there’s enough food and drink packed in your car to keep you alive until then.