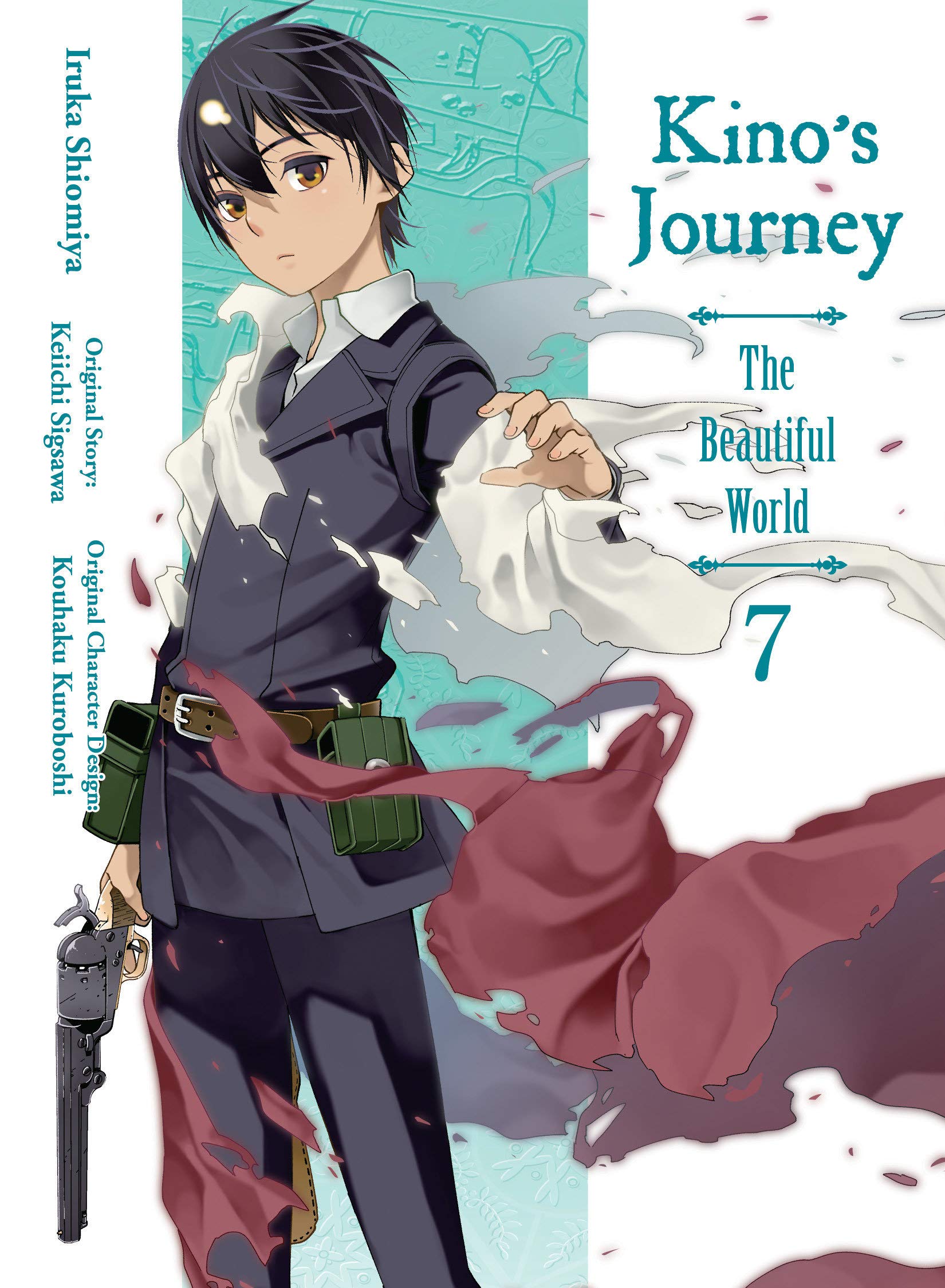 Origin tales can give an eye-opening look into the mentality and personality of our protagonists. While Kino’s Journey: The Beautiful World has shown our traveler’s past in some form, we’ve yet to see how XXXXX (named as such because not even the author dares to dead-name) transformed into the Kino we’ve all come to know. Volume Seven of Iruka Shiomiya’s adaptation of Keiichi Sigsawa’s light novel series changes that, and does so in a heartfelt way.

Readers are given a glimpse of this transformation in the three-parter “Work in Progress.a”, as Kino trains under the mysteriously-named Master. This is where their gun training and motorrad-riding techniques are finely-tuned, before Kino goes off on their adventure. During this training, they discover where the original Kino was from, resulting in them making a trip to a nearby village. There, the new Kino comes face-to-face with the mother of the man who changed her life.

It’s interesting to see Kino with the personality that they have in “Work in Progress.a”, as it’s lacking the melancholy and subdued persona they now have. There’s curiosity and a fire in their eyes, the kind that Master fears may be extinguished the more Kino sees the world as it truly is. In a The Kino in this moment is a totally different person from the one we follow in their present form, and it’s not just because of a mere haircut. How they ride Hermes or fire a persuader has a more youthful approach rather than the cautious one that we’ve come to expect.

This all leads up to the meeting of the original Kino’s mother. It’s their first hands-on lesson on the important of trust and staying on their guard. We all know that the current Kino takes a very careful approach to their surroundings, never letting their sixes be left unwatched or their persuader be left unloaded. Their meeting with the mother is the focal point in their life when they realize that trust should always be ready to be thrown out of the window, and it’s this powerful moment where Kino becomes aware of what’s in store for them.

But Kino’s not the only one with an origin story to tell. Before “Work in Progress.a”, readers are greeted with the two-parter “A Blessing”, which tells of a story before Shizu arrived at the coliseum. He is constantly bothered by Rafa, a young poor child who wishes to be purchased by him. Knowing how the town runs its class system, Shizu shows some hesitation over the proposition. However, the child’s actual situation winds up being far more dire than he could’ve imagined.

Shizu’s back story isn’t particularly bad, but unlike Kino’s, there’s nothing much to grab hold of development-wise. It also doesn’t help that the story does feel more like an excuse to add a bit more suffering into Shizu’s predicament, giving him an idea of how similar Rafa’s goals are to his. While a sad story overall, it doesn’t quite hit the emotional punch that original author Sigsawa was probably going for. (Considering his glowing praise in the story’s adaptation in his afterword, I’m certainly surprised by how much he enjoyed Shiomiya’s version.)

In the end, Volume Seven of Kino’s Journey: The Beautiful World is something of a mixed bag. Shizu’s story is merely okay, whereas Kino’s tale is wonderfully paced and emotionally strong. One hopes to see more of Kino’s pathway into the traveler they are now, as “Work in Progress.a” certainly shows Kino in a rather interesting light. As for Shizu, his stories can be very take-it-or-leave-it both in narrative and attitude, so just soldier through “A Blessing” before getting to the real meat of this volume.