So, yeah. I knew I was going to enjoy Fangs after hearing the premise alone; a steamy BL romance about modern vampires and mutual “feeding” arrangements? Sign me up! I went into it expecting a fun but shallow romp full of bloody bites and blushing bottoms - the typical vampire erotica experince. Instead, I was blindsided by one of the best romance manga I’ve read all year! Not only is Fangs beautifully illustrated, but its characters are thoughtfully written, its central romance surprisingly tender, and its world ripe with potential for future drama.

Readers follow En, victim of a frenzied vampire attack and newly turned creature of the night, as he integrates into vampire society. Thankfully, he makes an instant connection with Ichii, an employee of “FANGS”: a secret organization that’s part vampire social services, part supernatural law enforcement. Because En’s attack fell under Ichii’s jurisdiction, the elder vampire takes responsibility for En’s well-being, and works to ensure his transition into undead life goes as smoothly as possible. 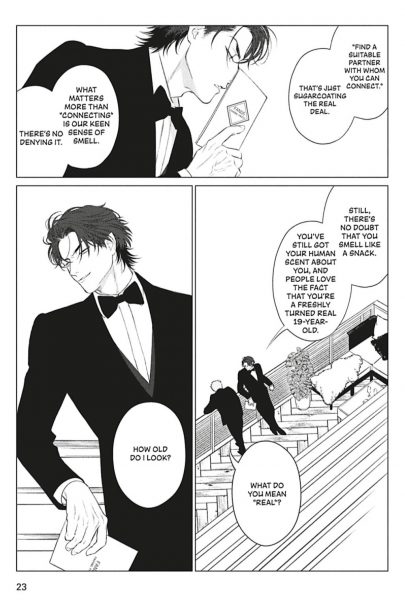 To minimize risk of exposure and foster a more peaceful coexistence, FANGS encourages all vampires under its purview to pair up and feed off one another, rather than humans. Because feeding is a euphoric and intimate experience, paired couples often become romantically involved, staying together for centuries. Being the first newbie vampire to debut on the local scene in over fifty years, En is quickly overwhelmed by offers to “pair up,” and in a fit of panic, he declares himself already in agreement to stay with Ichii - and much to En’s relief, the other isn’t adverse to the idea.

What follows are the trials and tribulations of En’s daily afterlife, as he navigates the newness of his relationship with Ichii, and his vampiric urges.

Right off the bat, I have to say: En and Ichii make this manga work. I’m going to praise Fangs's setting and worldbuilding a lot going forward, but it needs to be said that without this main couple hitting it out of the park, Fangs would be a shadow of itself. They are adorable together. 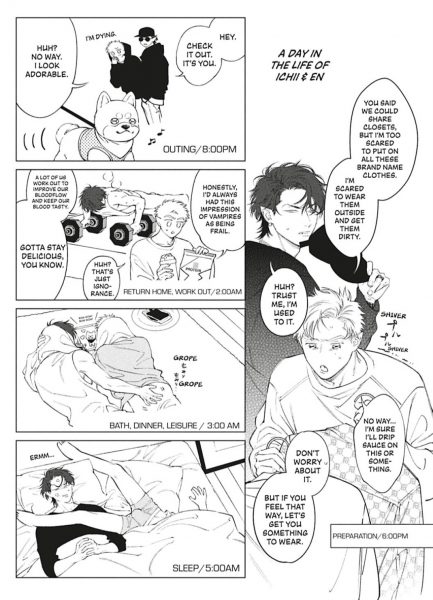 The two have genuine chemistry. Too often couples in BL act so belligerent toward one another that it's hard to believe like one another, let alone could fall in love; thankfully, Fangs doesn’t have that problem. Despite sleeping together as soon as the second chapter, En and Ichii’s emotional relationship is a delightful slowburn that never feels tedious or boring. Their sexuality doesn’t make or break them falling in love; it isn't an end goal for either party, but rather acts as just another way for them to express themselves. In fact, Fangs as a whole has a surprisingly mature and healthy view toward sex and sensuality's role in all its relationships, casual and otherwise.

En and Ichii are openly attracted to one another physically, but also honestly enjoy each other’s company. They read like actual adults in an actual relationship (shocking, I know). They tease and argue at times, but never come off as unkind or cruel. They’re both exceedingly empathetic people who prioritize being respectful of one another’s boundaries above all else, and I’m here for that.

The sexy times are a nice bonus, though.

Reader beware if explicit BL isn’t to your tastes, but for everyone else? Fangs delivers and then some. Billy Balibally’s art is gorgeous, their lines are clean, and they have a excellent eye for little details that really make a scene pop. Characters, of course, are as attractive as one would expect a cast of vampires to be. If subpar composition and wonky anatomy has ever turned you off BL before, rest assured that Fangs suffers from none of those issues. 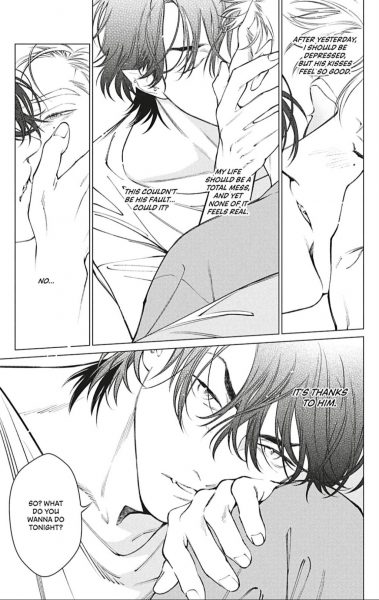 The majority of this volume follows En as he shadows Ichii during his job: performing “wellness checks” on various vampires, paired and not. It's through these visits that Fangs’s supporting cast is introduced, its unique vampiric lore and setting is expanded, and the series reveals itself to be, surprisingly, a commentary about mental health. Who would have guessed?

It’s revealed that FANGS’s “pairing” system is as much about sating bloodthirst as it is fostering healthy emotional support systems. The vampire population as a whole is on the decline, due in large part to suicide. In Fangs, being immortal kind of sucks, and its vampires are tremendously lonely beings that desperately crave companionship. None of the vamps introduced thus far are interested in making waves, or devising evil schemes; they’re more or less normal people, trying to cling to one another in a world where everything around them dies. The way Fangs tackles topics like death, grief, and mourning are very human - funnily enough, given its inhuman cast. 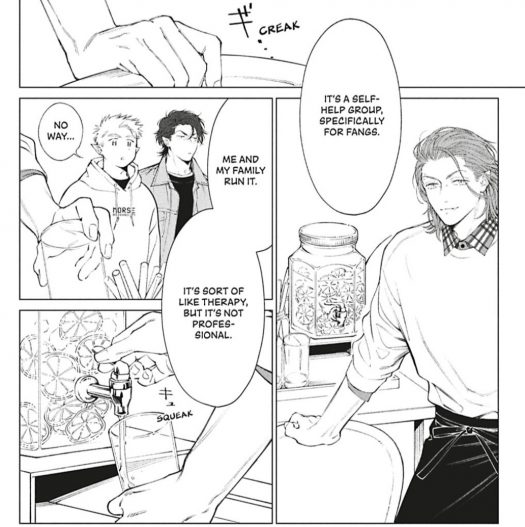 One character, Sugi, is introduced in the throws of a depressive state - one he’s been trapped in ever since his paired husband died years ago. His grief is raw and all-consuming, but he isn’t shunned by the vampire community because of it. Ichii, and in turn, En, reach out and support him through their visits, and help him get out and socialize.

Another vampire, Masaki, runs a self-help group along with his human wife, Mariko (who’s aged visibility while he’s reminded trapped in time), that encourages vampires to meet and support one another through difficult situations. Fangs isn’t shy about the tragic reality of a vampire and human falling in love, or how devotion can naturally warp or wain over the course of centuries. These varied depictions of what mature relationships look like against the backdrop of supernatural circumstance are compelling, and give En and Ichii a lot of think about in regards to their own future together. 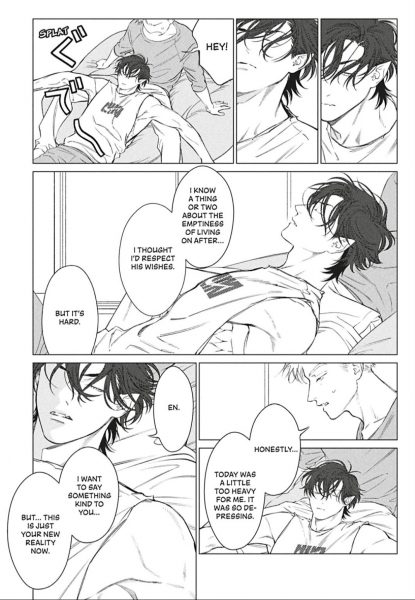 This volume ends teasing the return of a dangerous figure from Ichii’s past. Both him and En avoid talking about the lives they lived before they met, so I'm curious to see what this newcomer will reveal. So long as Fangs's narrative remains relatively character-focused and small in scope, I can easily see this being series I stick with until the end.

I highly recommend Fangs for BL, LGBTQ+, and vampire fans alike. It’s a standout addition to all three genres, and deserves a place on your bookshelf this October and beyond.