HomeAnimeSpring 2021 Anime Recap: The Good, The Bad, and the Meh! 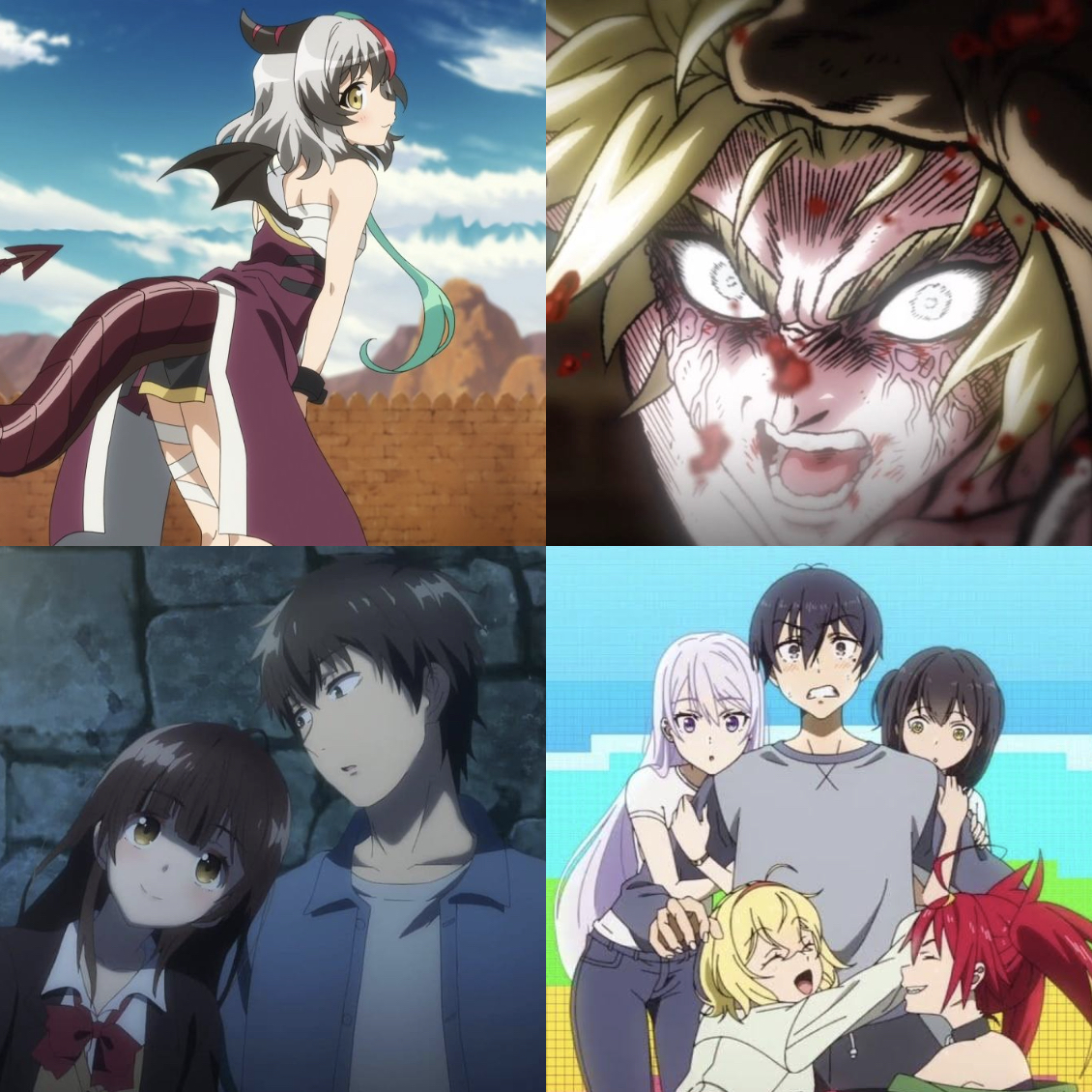 Springtime calls for beautiful flowers, sunshine, and the end of chilly days for the time being. In the realm of anime in Spring 2021, there was plenty of warmth from the likes of a giant dragon, a gang of baddies, and an adult helping a kid straighten out their life. But within the good times were some anime rough patches, in the forms of a love trapezoid, a Showa-era tale of revenge, and — yes — a former yakuza. Let’s revisit the series that made us either cheer or yawn during this past season! (Check out our reviews of Koikimo, I’ve Been Killing Slimes for 300 Years…, The Slime Diaries, Don’t Toy With Me, Miss Nagatoro, ODDTAXI, and the season’s returning series at their respective links!) 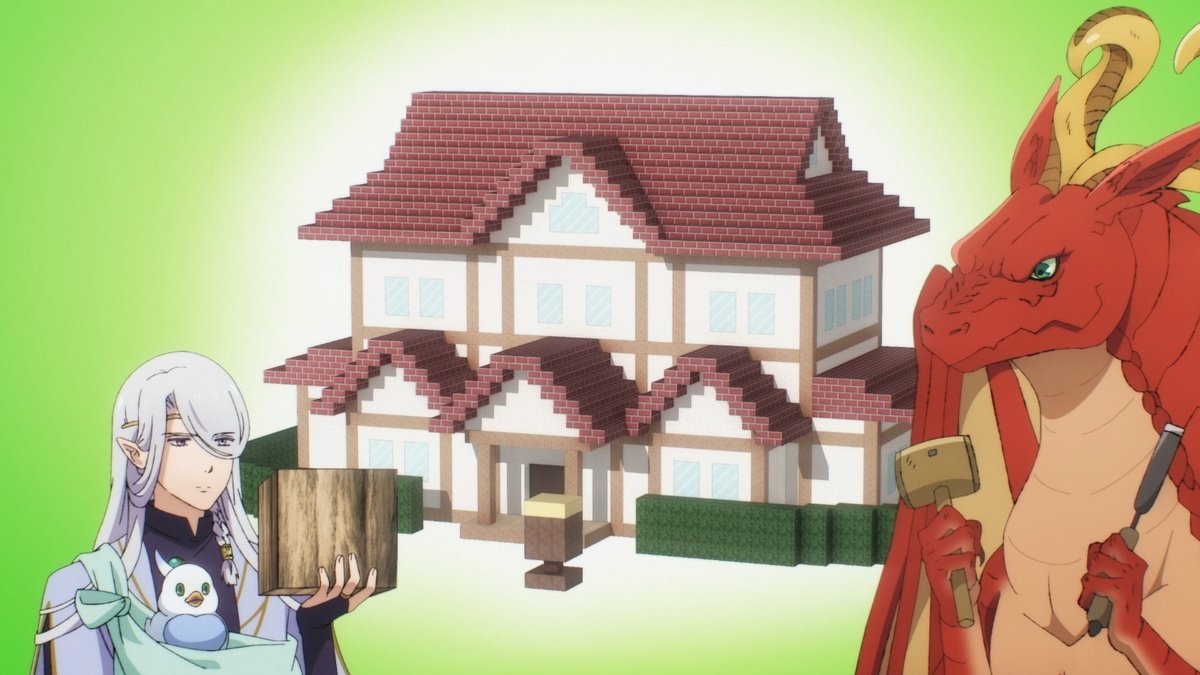 It’s a delightful twist on fantasy comedy, as fraidy-cat dragon Letty seeks a place he can call home. With the aid of the demon lord elf Dearia, the red-scaled beast roamed haunted mansions, creature villages, and even a colosseum prison in search for the perfect house. While the journey has not yet ended, Dragon Goes House-Hunting still managed to find a place in every viewer’s heart by season’s end.

Dragon Goes House-Hunting can be viewed on Funimation, and has been licensed by Funimation.

Higehiro: After Being Rejected, I Shaved and Took in a High School Runaway 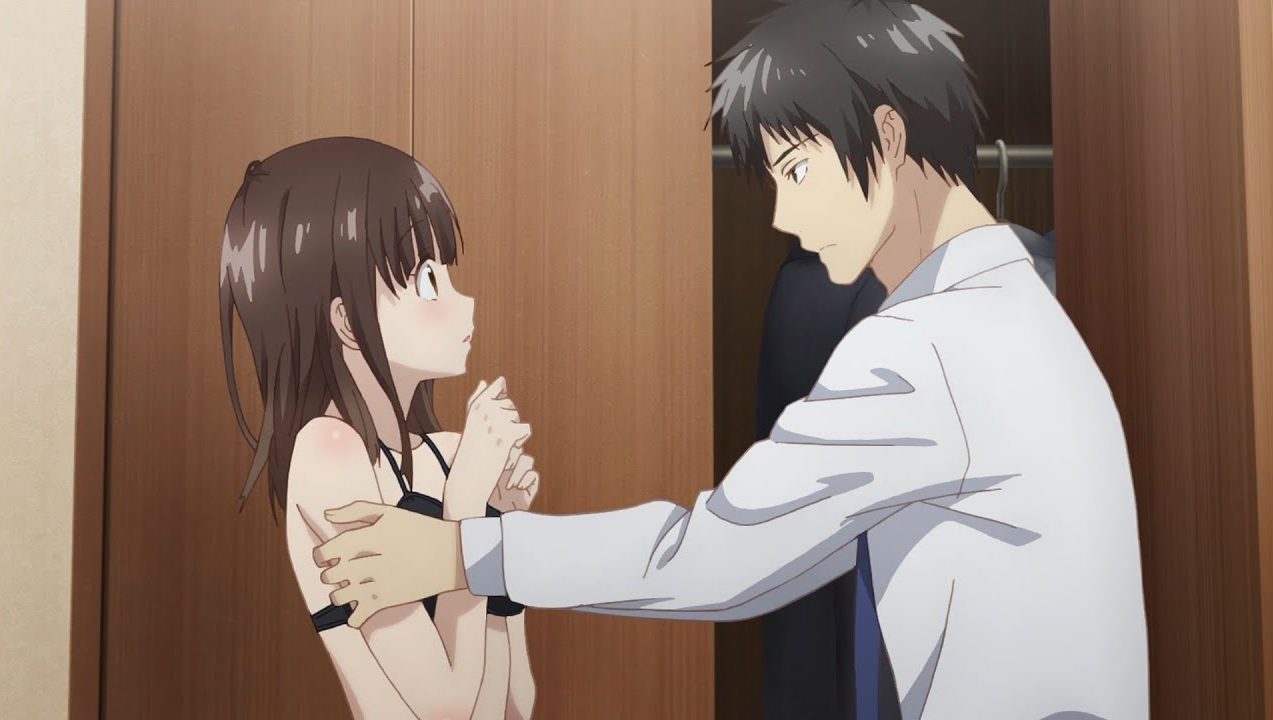 Between this and Koikimo, Spring 2021 has a scent of cringe in the air. Thankfully, Higehiro went a much deeper route with its narrative, as salaryman Yoshida helped the troubled Sayu get back onto a better life path. From lovesick coworkers to the most punchable mother of the year, Higehiro brought plenty of heartache and earned smiles throughout its run. Even with its open-ended conclusion, one hopes that better days are ahead for both Yoshida and Sayu.

Higehiro can be viewed on Crunchyroll and VRV. It has been licensed by Crunchyroll.

Combatants Will Be Dispatched! 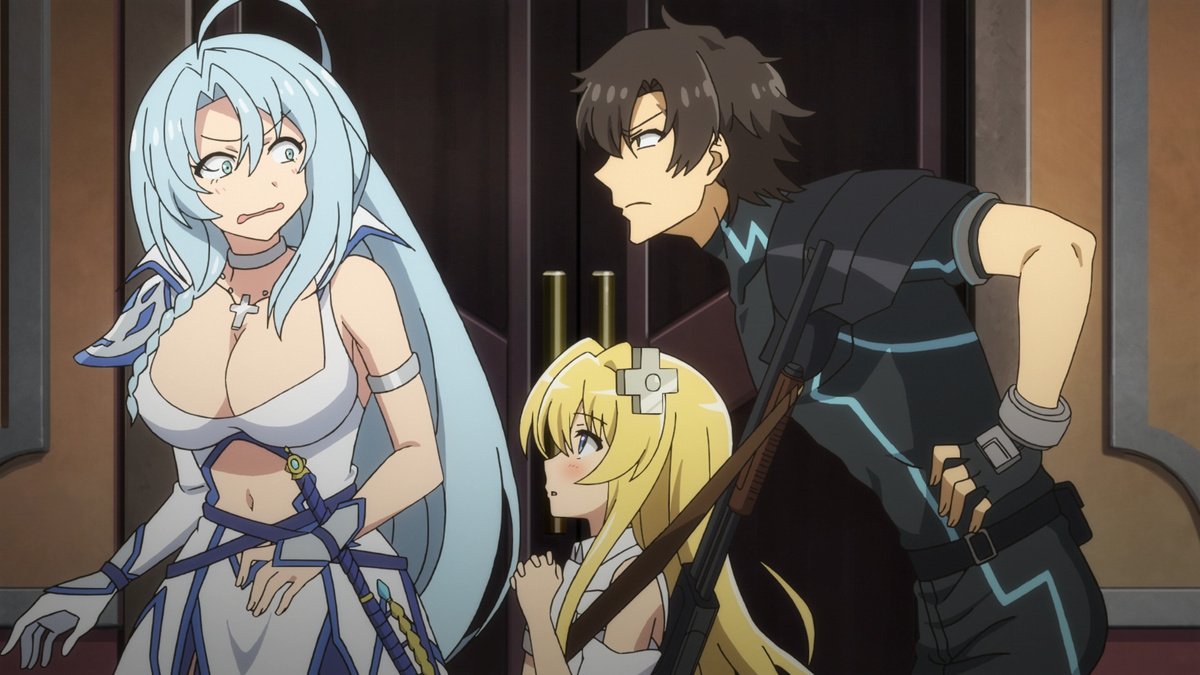 The creator of KonoSuba brings together another cast of delightful shit-bags, as Combatants Will Be Dispatched! made heroes out of villains. Six and Alice’s quest to conquer a planet grabbed plenty of “Evil Points”, with the aid of a hungry chimera, a sex-crazed Archbishop, and a useless Commander. For the most part, the comedy hit hard, albeit not as hard as any adventure with Kazuma Sato. But one thing’s for certain: thanks to Combatants Will Be Dispatched!, I’m never looking at Top Knots the same again!

Combatants Will Be Dispatched! can be viewed on Funimation, and has been licensed by Funimation. 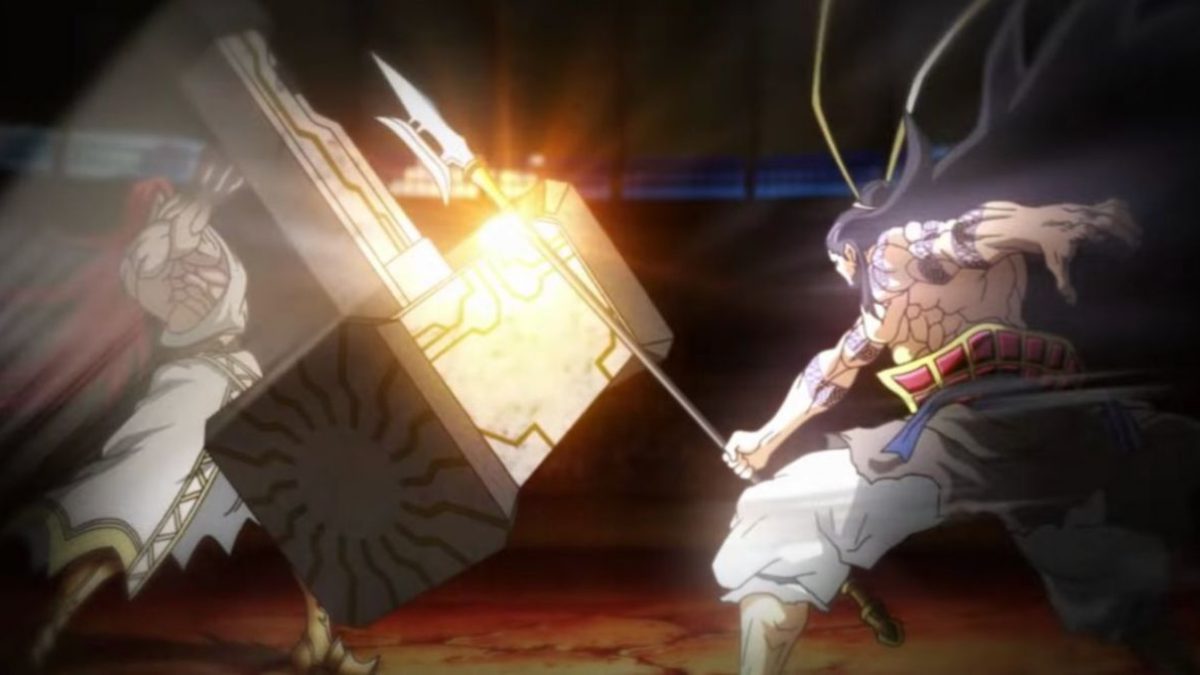 Man Vs. God has never been as epic as it is in Record of Ragnarok. As twelve deities face off against twelve of history’s strongest humans, the face of all mankind rests on its outcome. Thus far, we’ve been given the first three fights, which — while not perfectly animated — managed to showcase plenty of tension and deep backstory. If it’s given another season, then Record of Ragnarok has the potential to bring a really damn good fight to the circle.

Record of Ragnarok can be viewed on Netflix. 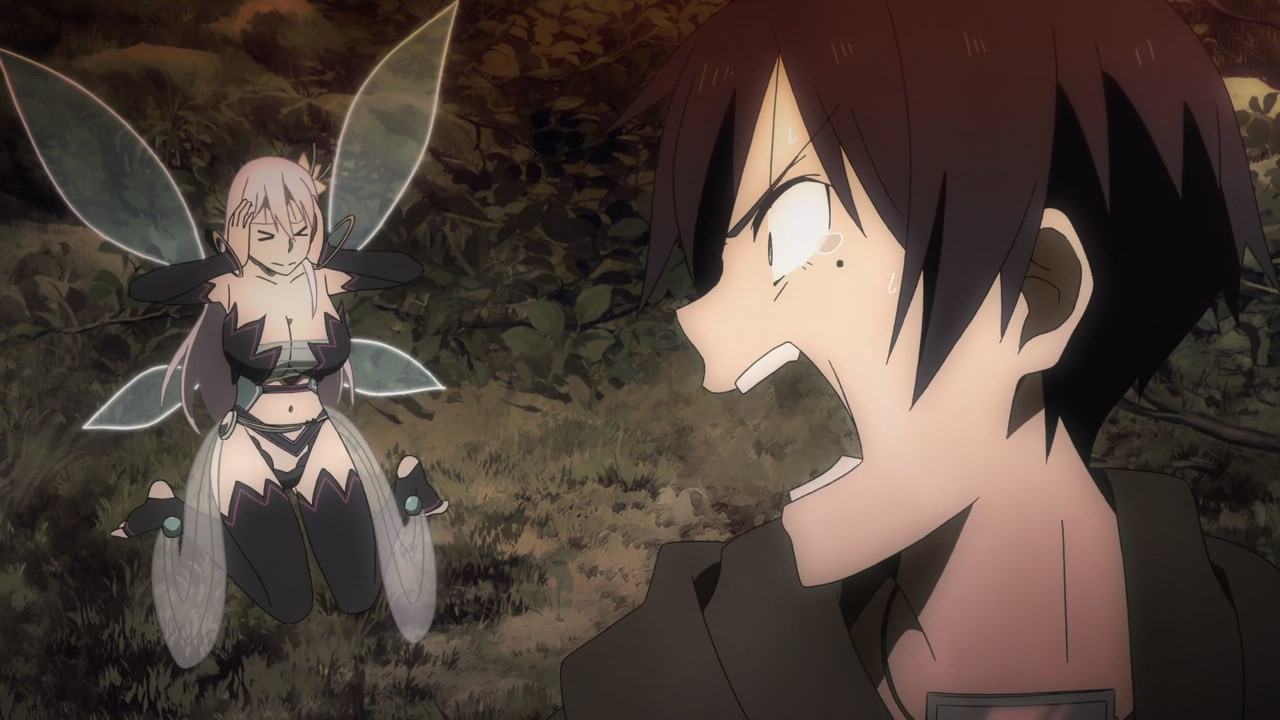 I can relate to being bad at “realistic” RPG games. (Hell, my save file for Kingdom Come: Deliverance is still stuck at the impossible lock pick tutorial!) So I kind of felt for Hiroshi during his frustrations playing Kiwame Quest. It had some unexpected laughs and plenty of soiled pants, but Full Dive kind of stumbled with its overall execution. Considering how it all turns out, one can’t help but want to rage-quit over its inconclusive, erm, conclusion.

Full Dive can be viewed on Funimation, and has been licensed by Funimation. 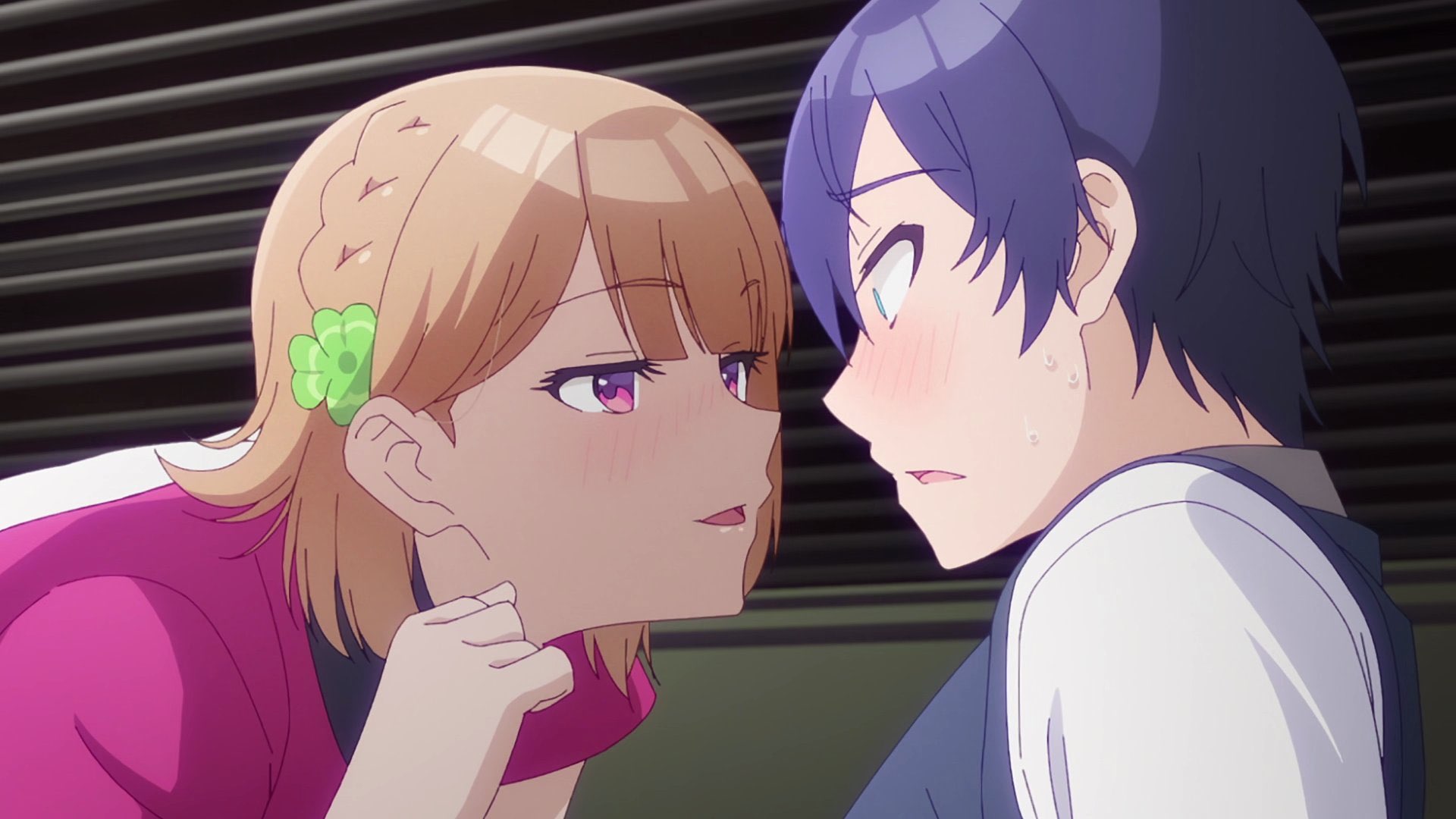 Doga Kobo is good at two things: rom-coms and cute anime girls. Osamake has both, as the story of former child actor Suehara finding love and redemption should’ve checked off those boxes perfectly. Sadly, the overall story failed to capture the laughs we’ve come to expect from the studio behind Monthly Girls’ Nozaki-kun and Engaged to the Unidentified. It did well with the more dramatic elements (especially Suehara’s backstory revolving around his mother), but the overall presentation in Osamake was as rough as an amateur YouTube video circa 2007.

Osomake can be viewed on Crunchyroll and VRV. It has been licensed by Crunchyroll. 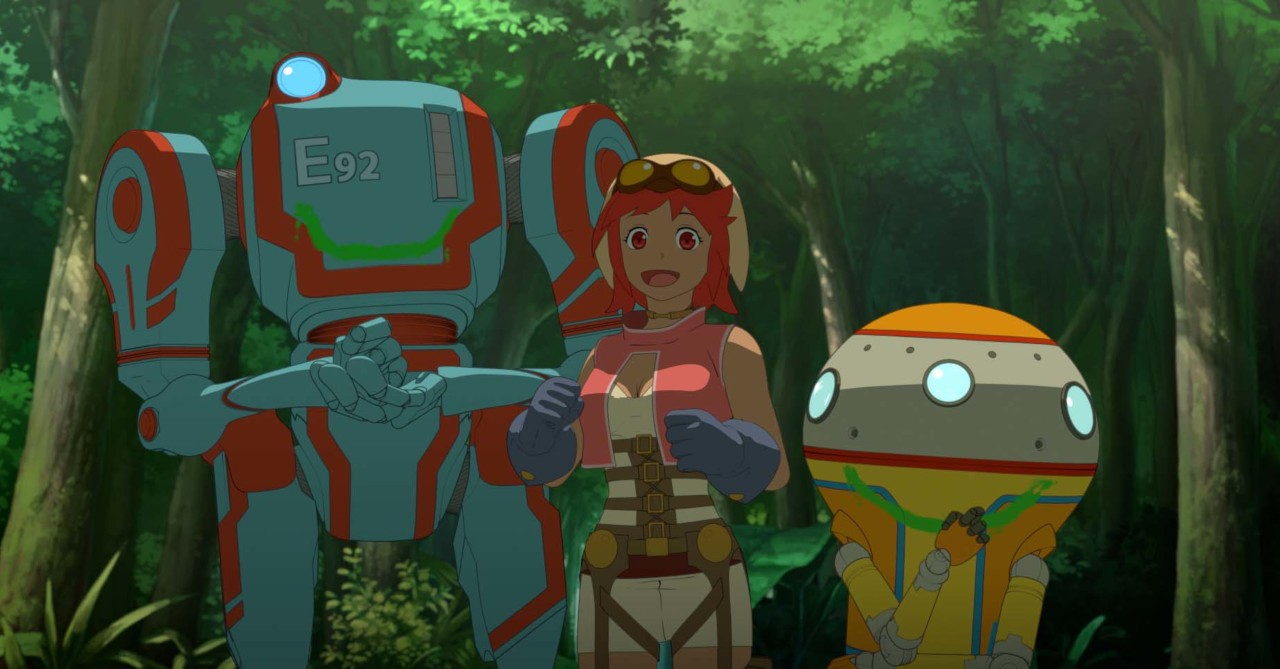 Eden’s post-apocalyptic tale revolving around a human in a robot’s world had a lot of potential. From having the likes of David Tennant and Neil Patrick Harris in its cast to the director of Fullmetal Alchemist: Brotherhood being in charge of helming it, this four-episode series was interesting and beautiful to look at. With that being said, there were many shortcuts in its narrative that could’ve been expanded more, especially when it came to Sara’s origins. Maybe a second season can fix these, but as it stands, Eden should’ve been a more polished movie than a bumpy short anime.

Eden can be viewed on Netflix.

Joran: The Princess of Snow and Blood 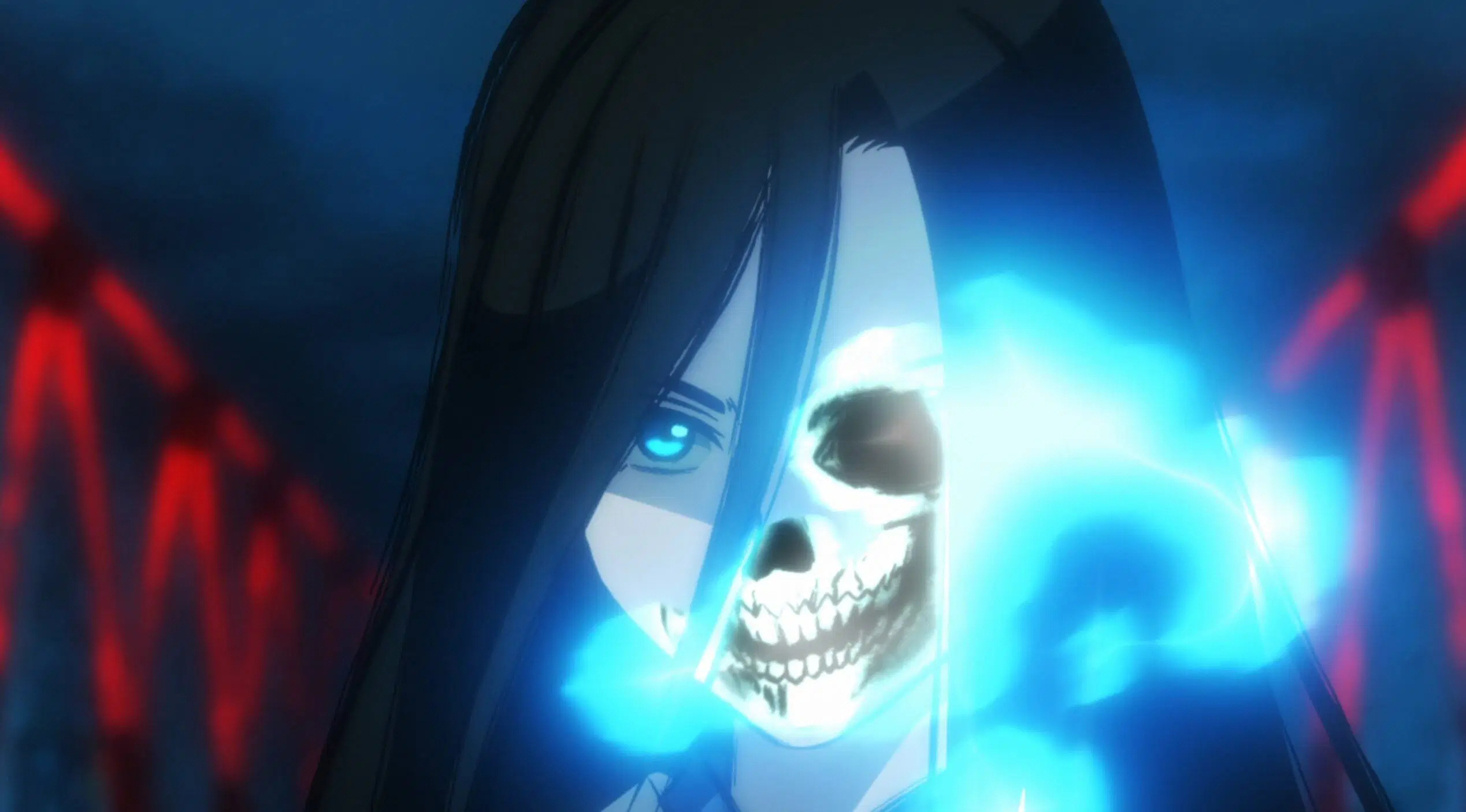 I was blown away by the opening episode of Joran: The Princess of Snow and Blood, thanks to its beautiful animation and 1970s Japanese grindhouse aesthetics. But as the series went on, the characters became unlikable while the story went nowhere. Its only saving grace was Bakken Record’s gorgeous visuals and nostalgic opening & ending themes by Raise A Suilen. Everything else about Joran made me wish I was watching Lady Snowblood instead.

Joran: The Princess of Snow and Blood can be viewed on Crunchyroll and VRV. It has been licensed by Crunchyroll.

The World Ends With You the Animation 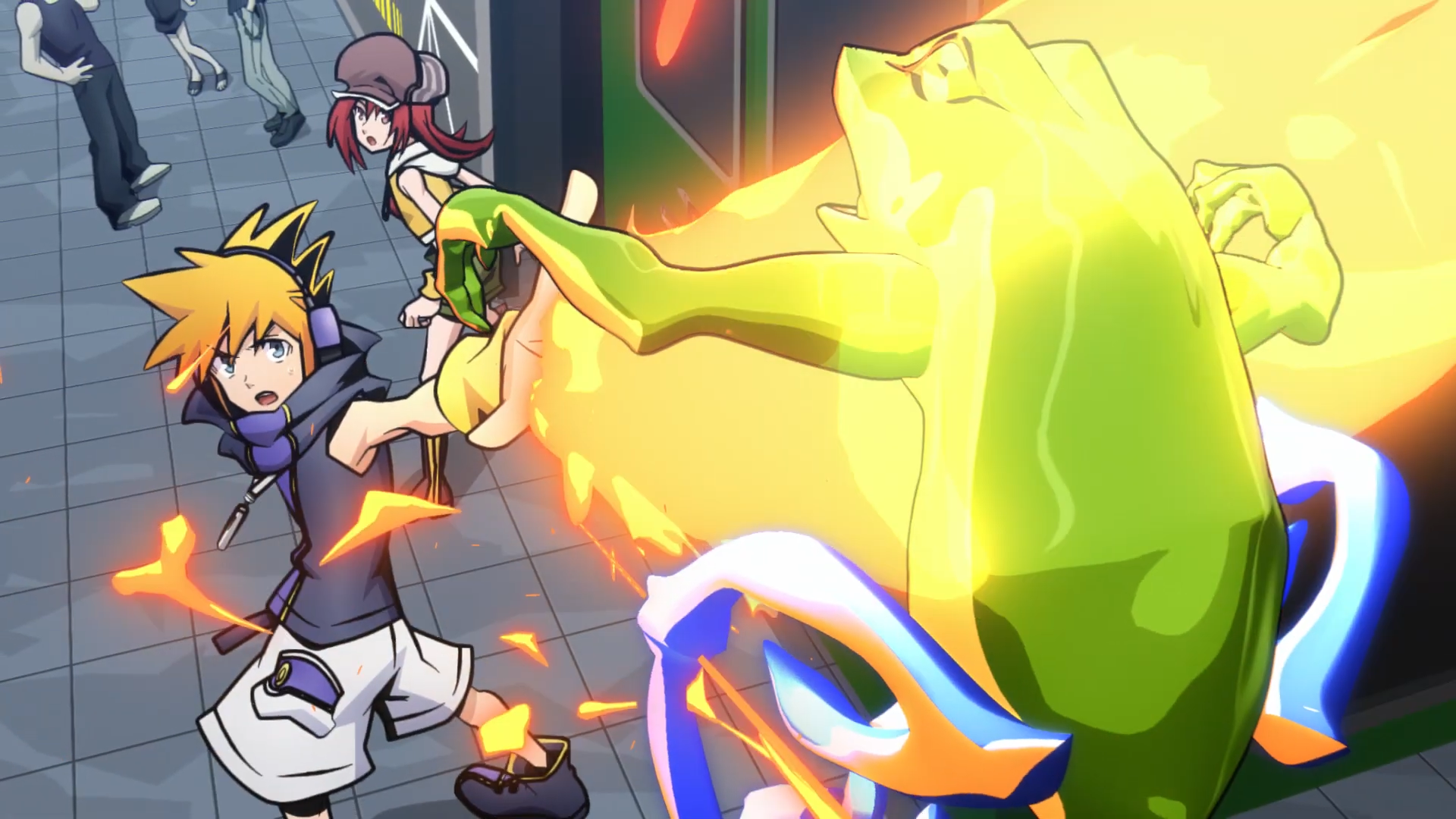 Square Enix’s The World Ends With You is an underrated RPG classic. Its anime adaptation, however, will be quickly forgotten before the year ends. Squeezing a long video game into a 12-episode series is just asking for a shoddy narrative, and Neku’s journey to return to life suffers immensely because of it. The animation was choppy, the voice acting sounded forced, and — worst of all — the formerly exciting story de-evolved into a dull mess. Next time I want to experience The World Ends With You, you can bet I’ll be booting up my Nintendo 3DS instead of watching this hot mess.

The World Ends With You the Animation can be viewed on Funimation and Hulu. It has been licensed by Funimation.

The Way of the Househusband 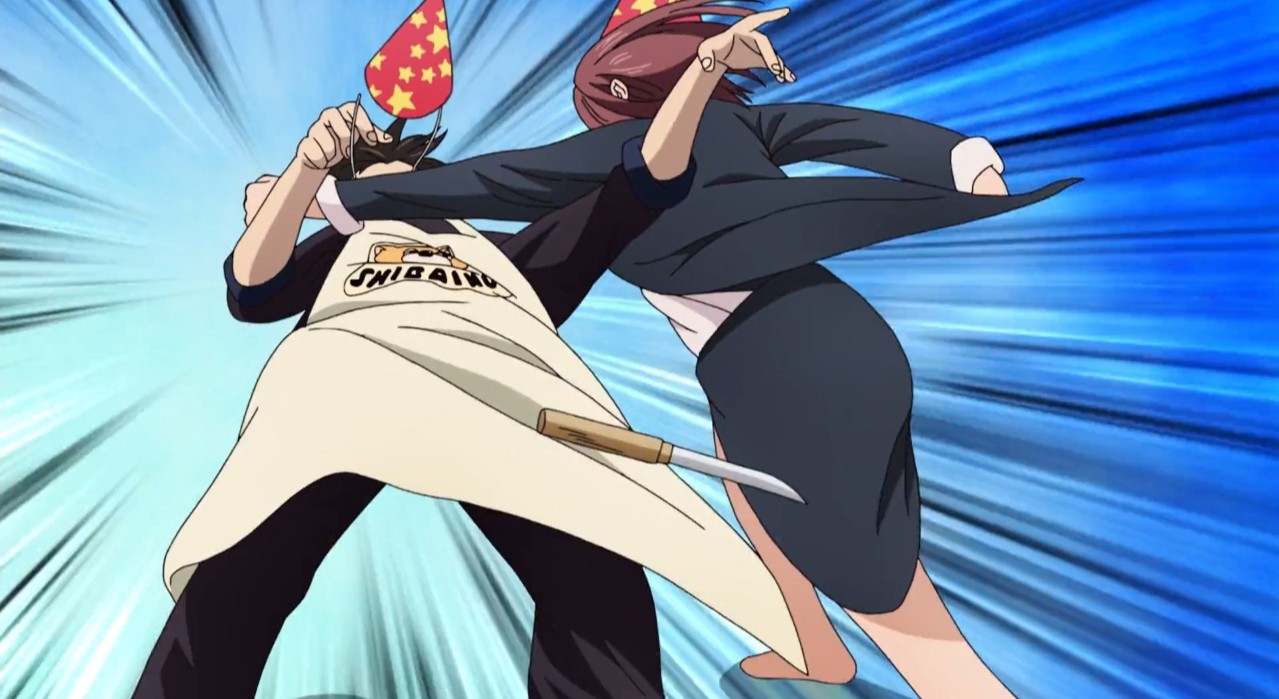 It should’ve been easy to bring Kousuke Oono’s laugh-a-panel manga to life. Unfortunately, J.C.Staff took a page from those old Golden Book videos I used to watch a kid, and quarter-assed its animation. Sure, Kenjiro Tsuda is perfect as the voice as Tatsu, but everything else about this anime adaptation is ugly from top to bottom! Out of all the series that came out this Spring, The Way of the Househusband was more disappointing than missing out on a flash sale.

The Way of the Househusband can be viewed on Netflix.

Any series we missed? Have a different opinion? Comment below, and share your thoughts on the Spring 2021 season!