ANIME REVIEW | A Wild Ride Inside An "ODDTAXI" 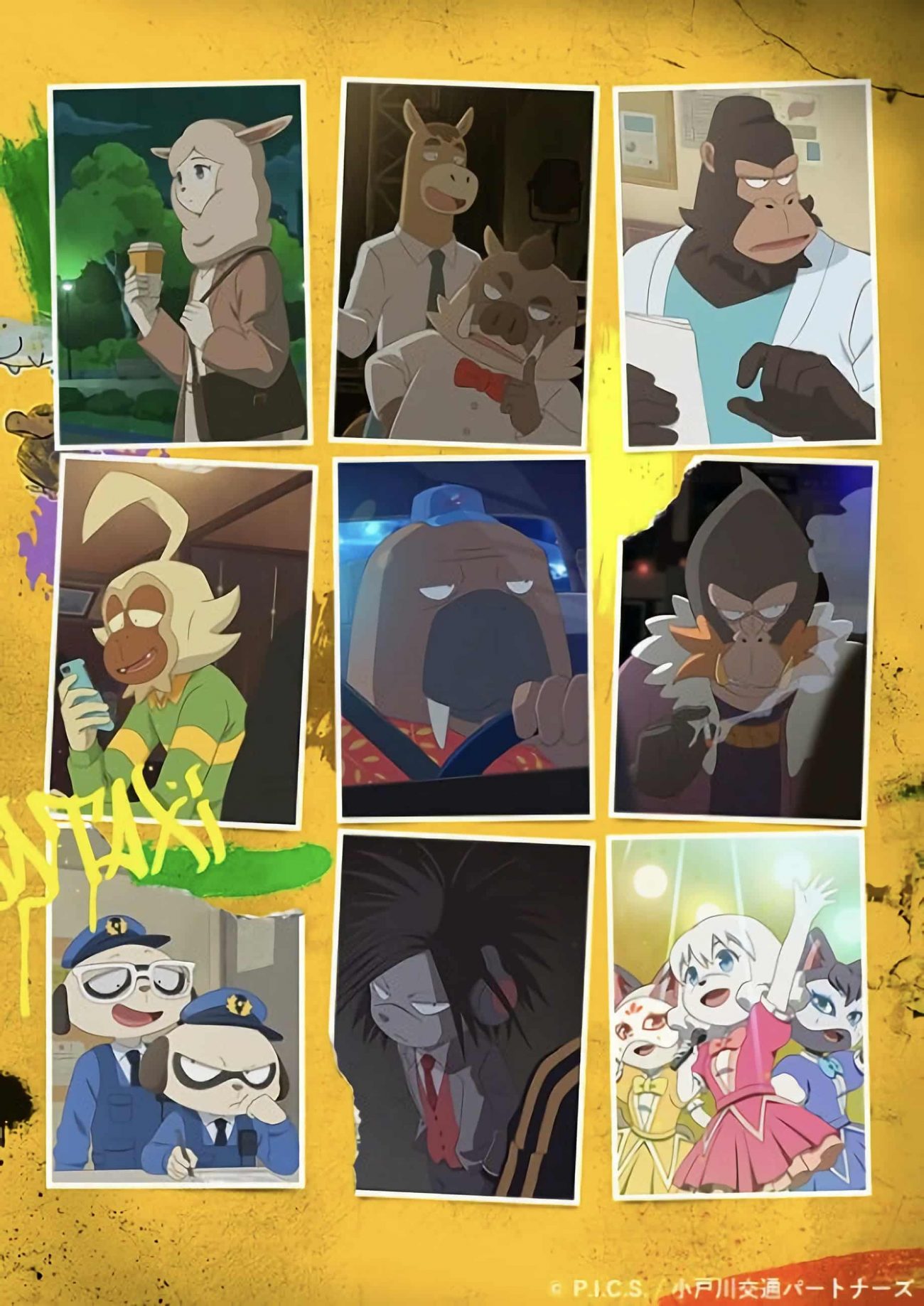 ANIME REVIEW | A Wild Ride Inside An "ODDTAXI"

Every single person on this giant orb we live on needs to watch ODDTAXI!

I truly wish this was all I need to say about this anime. Rarely has there been a series that not only surprised me, but also was a demonstration of what the next level of animated storytelling will be. Penned by newcomer Kadzyua Konomoto and directed by newcomer Baku Kinoshita, the series places the viewers in a world of anthropomorphic citizens in a Japanese setting. However, to compare it to BEASTARS, Zootopia, Aggretsuko, or even Bojack Horseman would be a disservice to what ODDTAXI has to offer.

There are a lot of faces to follow in ODDTAXI, but the biggest piece in the puzzle is Odokawa (Natsuki Hanae), a grumpy walrus who drives a cab around town. Through his interactions, he comes to know a social media addict hippo (Takashi), a boar (Yusuke) & horse (Atsuhiro Tsuda) comedy duo, and a fox manager (Makoto Furukawa) of an up-and-coming idol group. But when Odakawa falls for an alpaca nurse named Miho (Riho Iiad), he’s suddenly dragged into a shady world thanks to a gangster baboon named Dobu (Kenji Hamada). Meanwhile, as all of this is going on, a mystery arises revolving around a missing high school girl. 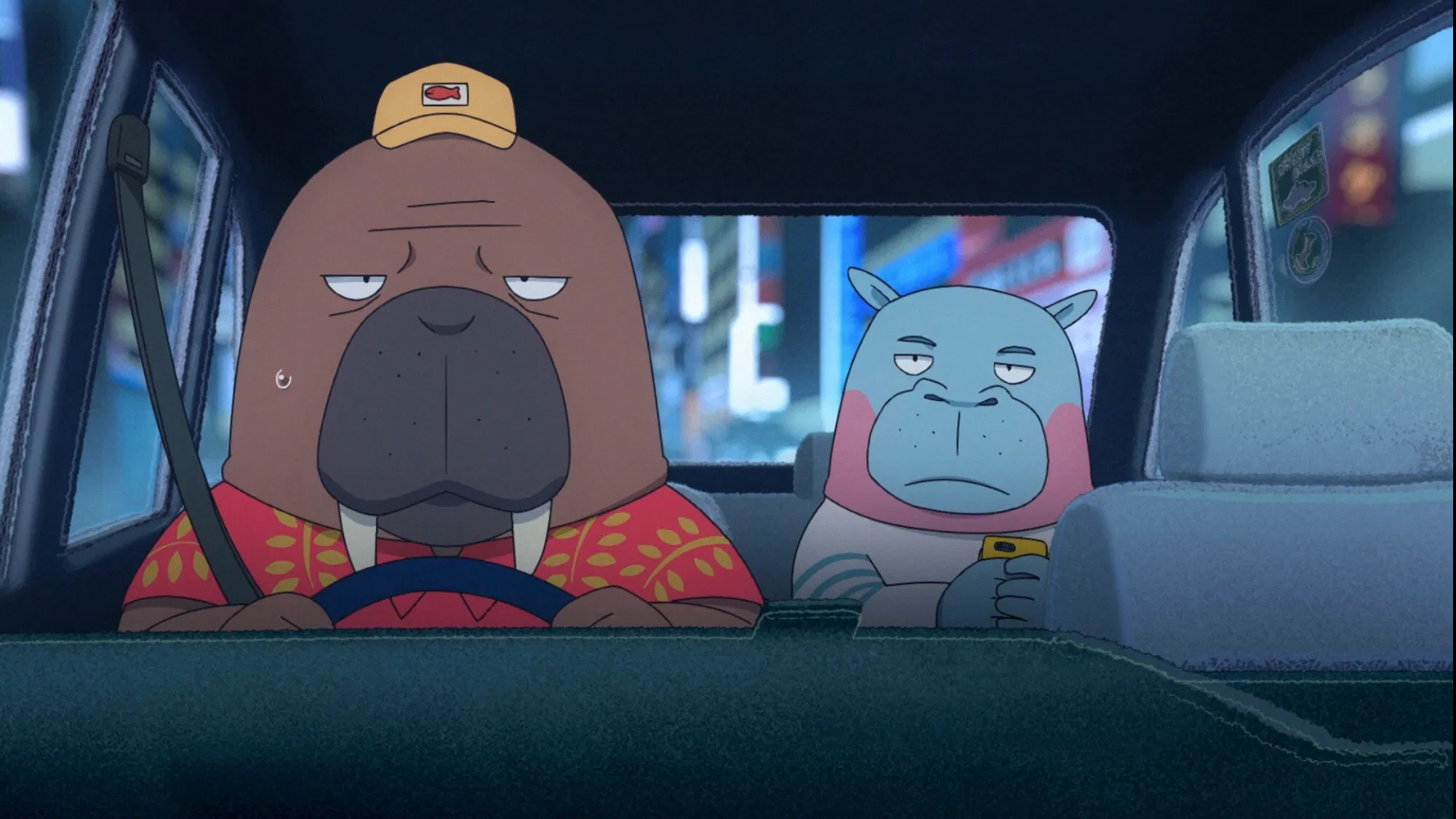 On top of what’s going on in Odokawa’s life, there’s what’s occurring with his gibbon friend Kakihana (Kappei Yamaguchi). Down on his luck, he attempts to better his love life by using dating apps. He manages to get a date with a cat girl named Shiho (Moeka Koizumi), but it quickly becomes a cautionary tale of who you can trust from the online world. The same can be said about Miho, whose kindness is taken advantage of by Dobu, to the point where she’s stealing medicine to pay off a debt.

One simply cannot describe ODDTAXI in a couple of sentences. This is a show that brims with layers, especially when it comes to the characters. Odokawa is the most mysterious of them all, despite him being in the spotlight for nearly all of the show. He has insomnia, is waiting for his parents to return after being abandoned over 30 years ago, and keeps talking to someone in his home who has yet to be revealed. Digging deep into this mystery is Odokawa’s gorilla doctor Gouriki (Ryohei Kimura), who finds that the walrus’s back story is more twisted than he’d ever imagine. 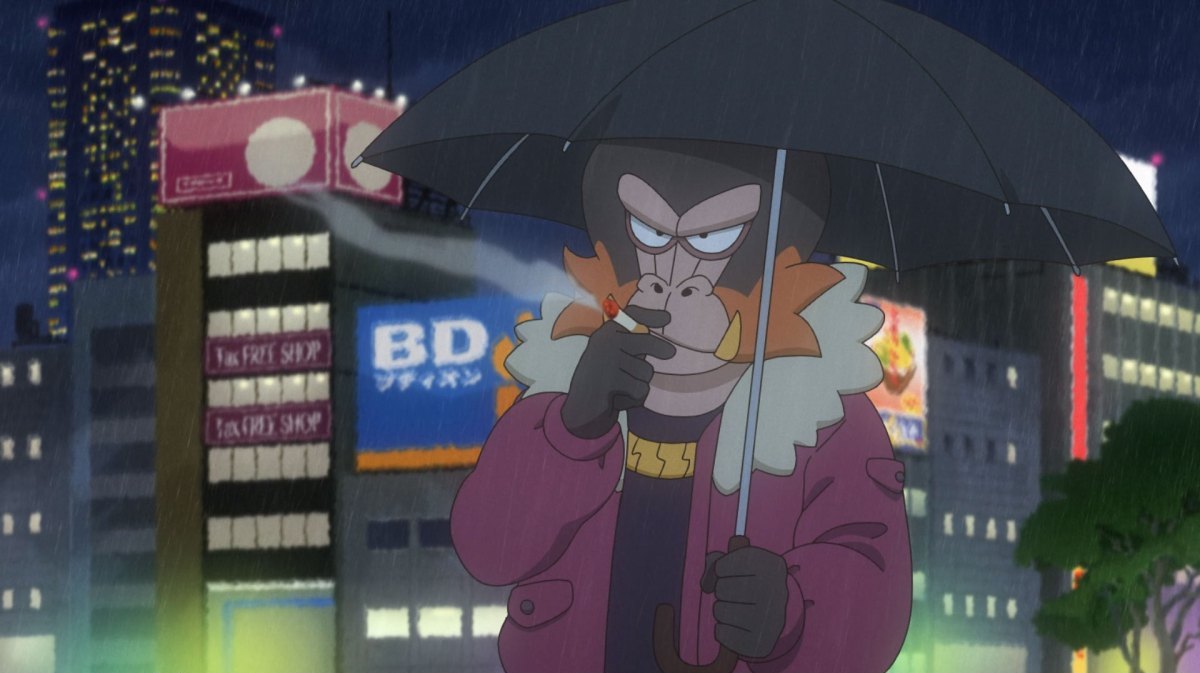 Everything connects back to Odokawa, who finds himself avoiding an assassin (Soma Saito) out for revenge. This character, an addict of gacha games, blames Odokawa for ruining his chance at a rare item. Not making things easier are the meerkat Daimon twin cops (Kohei & Asei), with the oldest having his hand in the crime syndicate and the youngest wishing to be a hero of justice. The idol group Mystery Kiss also plays a role in the story, with their biggest fan Shun (Kodai Sakai) winning big in the lottery thanks to Odokawa’s number picks.

Even with all of these elements of ODDTAXI on display, I still haven’t even scratched the surface of this show. But saying more would ruin the mystery and fun of watching this anime, as the less you know about it, the better. While I’ve revealed a lot about these characters’ back stories, I’ve not even begun to say how everyone becomes involved with one another. The narrative in itself is a tricky one to dissect, as every episode is filled with plot twists, reveals, and the occasional wow factor. 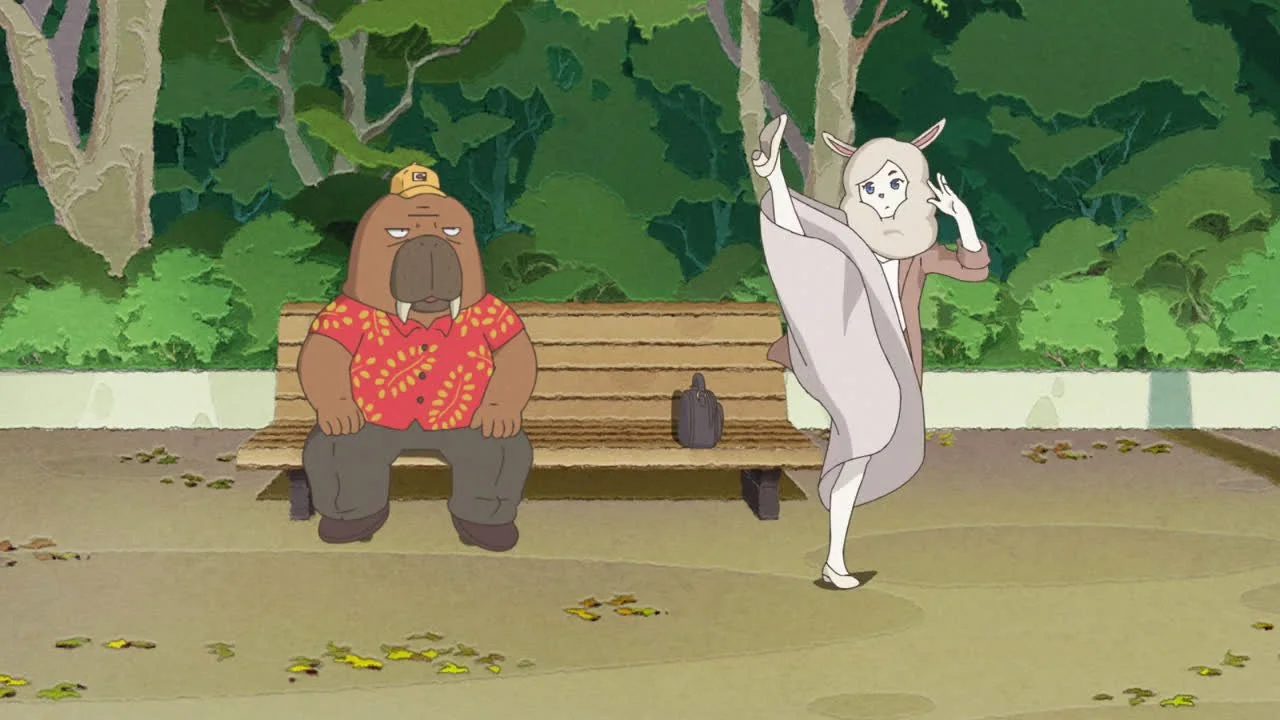 From a visual and timing perspective, this anime feels like a David Lynch film; dialogue-wise, it’s very much aligned with Quentin Tarantino. Odokawa and the rest of the cast basically talk about what’s on their mind, what their lives are like, and the usual small chit-chat about insignificant things. But there’s a foggy aura over every one of these characters, with a secret waiting to be revealed just around the corner. If one were to imagine the Vincent/Jules discussion about a royale with cheese shot in the style of Mulholland Drive, then you’d get the vibe of ODDTAXI.

It may sound like I am overreaching my comparisons, which I sometimes tend to do to get you to watch or play something. However, that isn’t the case with this anime. The story of Odokawa and the people who cross his path have left me feeling more emotions than most other shows have in the past. You’ll laugh when you watch Miho show her capoeira skills, cry when Kakihana is shoved into the bottom of society, and shriek when the guns start blazing. Most important of all, you’ll find yourself looking at these characters and see a reflection of your soul in them. 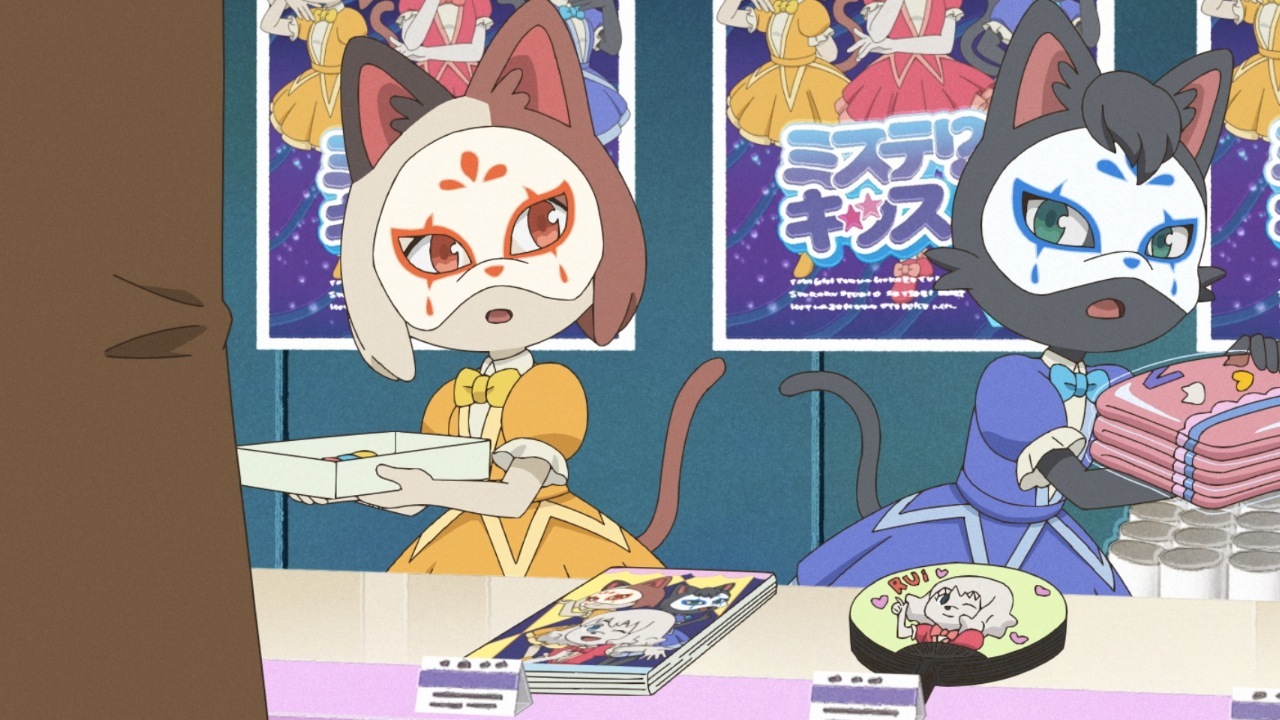 What makes the dialogue feel more real than most other anime is because of the way they created ODDTAXI. As the lines were recorded before animation production began, there’s a more natural presentation on how these characters are talking. In fact, some of it comes off as improv, which shouldn’t be a surprise given that there’s a handful of Japanese comedians in this cast. Every person has been placed in their roles in such a beautiful manner, from Hanae’s soft-yet-grumpy Odokawa and Iida’s kind-yet-sharp Miho to Yamaguchi’s sad & meek Kakihana and Hamada’s tough-as-nails Dobu.

Animation studio OLM (Pokémon, Yokai Watch) may seem like the least-likely company to help bring ODDTAXI to life. However, their knowhow of crafting cute animal character certainly helps with bringing a unique presentation to an otherwise dark story. Teaming up with new studio P.I.C.S., the show looks like a Saturday morning cartoon with an uncomfortable sense of awareness of the characters’ mortality. While not perfect, the movement of the characters and the world they roam about is certainly filled with loads of personality. 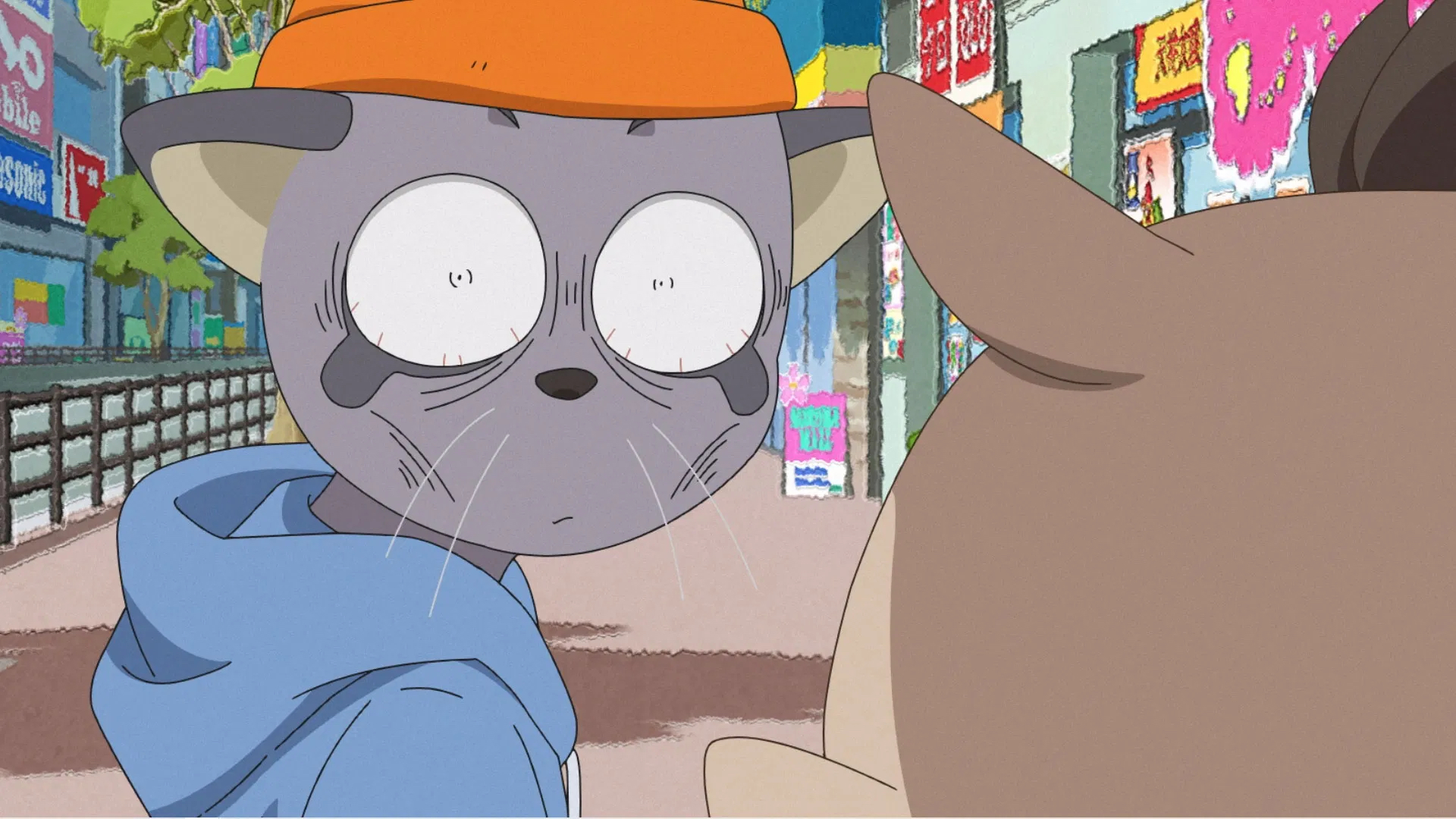 The trio of OMSB, DJ PUNPEE, and VaVa deliver a score that thrusts you into the world of ODDTAXI with ease. It sounds kooky, wild, and — in the right moments — soft and comforting. DJ PUNPEE teams with singer-songwriter Skirt to deliver the opening theme “Odd Taxi”, which is as smooth as a strawberry daiquiri served on a hot summer night. End theme “Sugarless Kiss” by Suzuko Mimori (who also voices Mystery Kiss frontwoman Rui) is a Perfume-meets-city pop jam that will have you dancing with a giant grin wherever you hear it.

With only a couple of episodes left, ODDTAXI is shaping up to be the anime that will be on everyone’s minds when the year comes to an end. All it needs to do is land that final jump, which seems more than likely to happen. There are still a few questions left to be answered, and if Konomoto and Kinoshita can yank their viewers off their chairs with one final twist, then we may just have a new series to place on a high pedestal.

So let me repeat what I said in this review’s beginning: Every single person on this giant orb we live on needs to watch ODDTAXI! That includes you!

ODDTAXI can be viewed on Crunchyroll and VRV. Episodes 1-11 were observed for this review. Promotional consideration provided by Ellation.