GAME REVIEW | A Healthy Diet of Seafood & Humans In "Maneater" 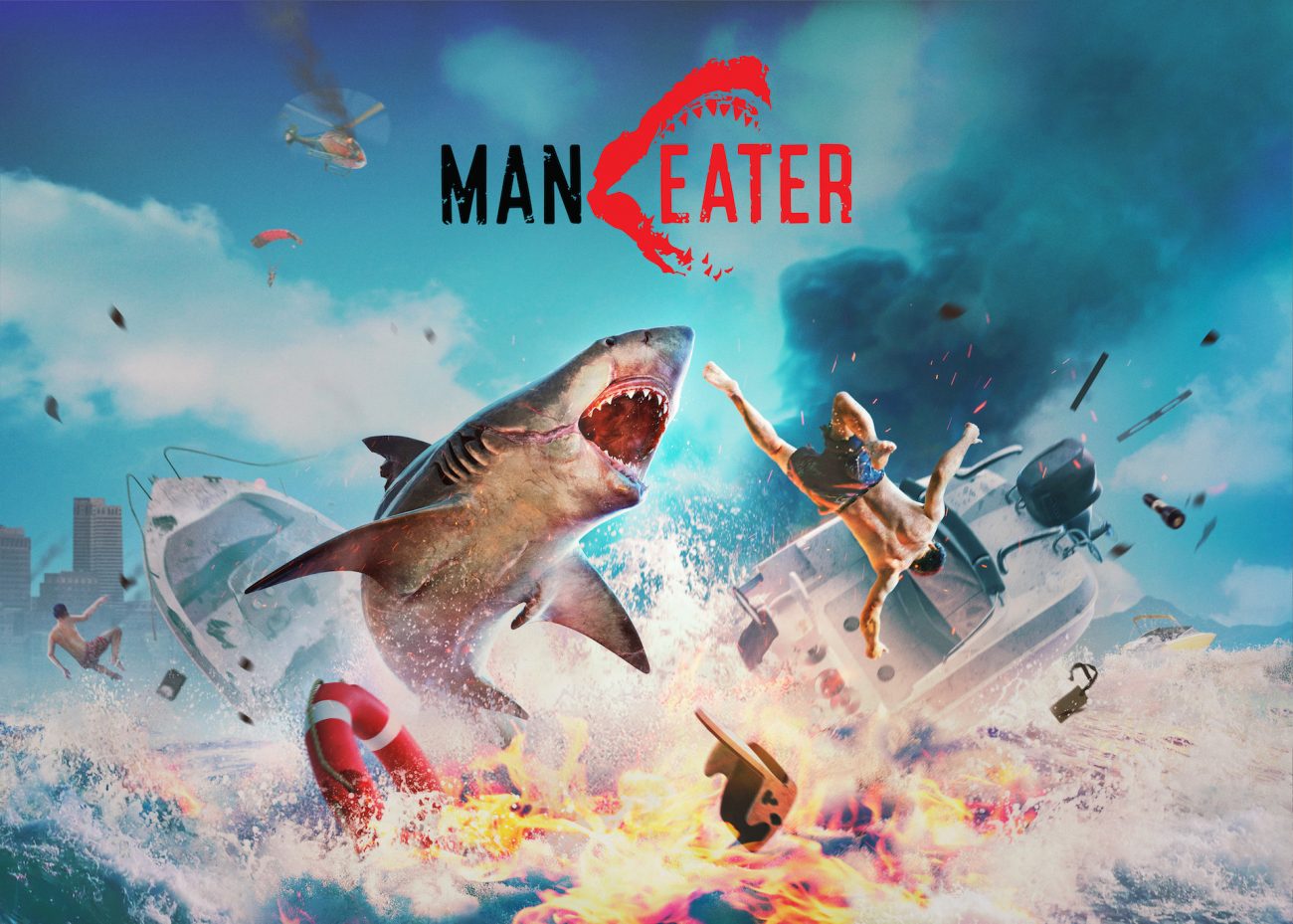 GAME REVIEW | A Healthy Diet of Seafood & Humans In "Maneater"

The deep blue ocean is home to many frightening creatures. Thanks to Steven Spielberg, sharks usually top the list of the most terrifying. For decades, gamers have been craving for a video game that gives them the experience of playing that sharp-toothed water-residing creature. Sadly, every Jaws video game every made was — to be blunt — lackluster. Fortunately, our prayers have finally been answered, in the form of Tripwire and Blindside Interactive’s Maneater!

Taking place in murky waters, Maneater has you take control of a bull shark, who was pulled from the womb by a Cajun hunter named Scaly Pete. Seeking revenge for the death of its mother, the shark sets out to become a powerful underwater beast. With its teeth and tail its main weapons, the shark sets out to chow down on fish, alligators, whales, and the most dangerous game of all: man! But Scaly Pete isn’t the only one seeking the fin of this bull shark… 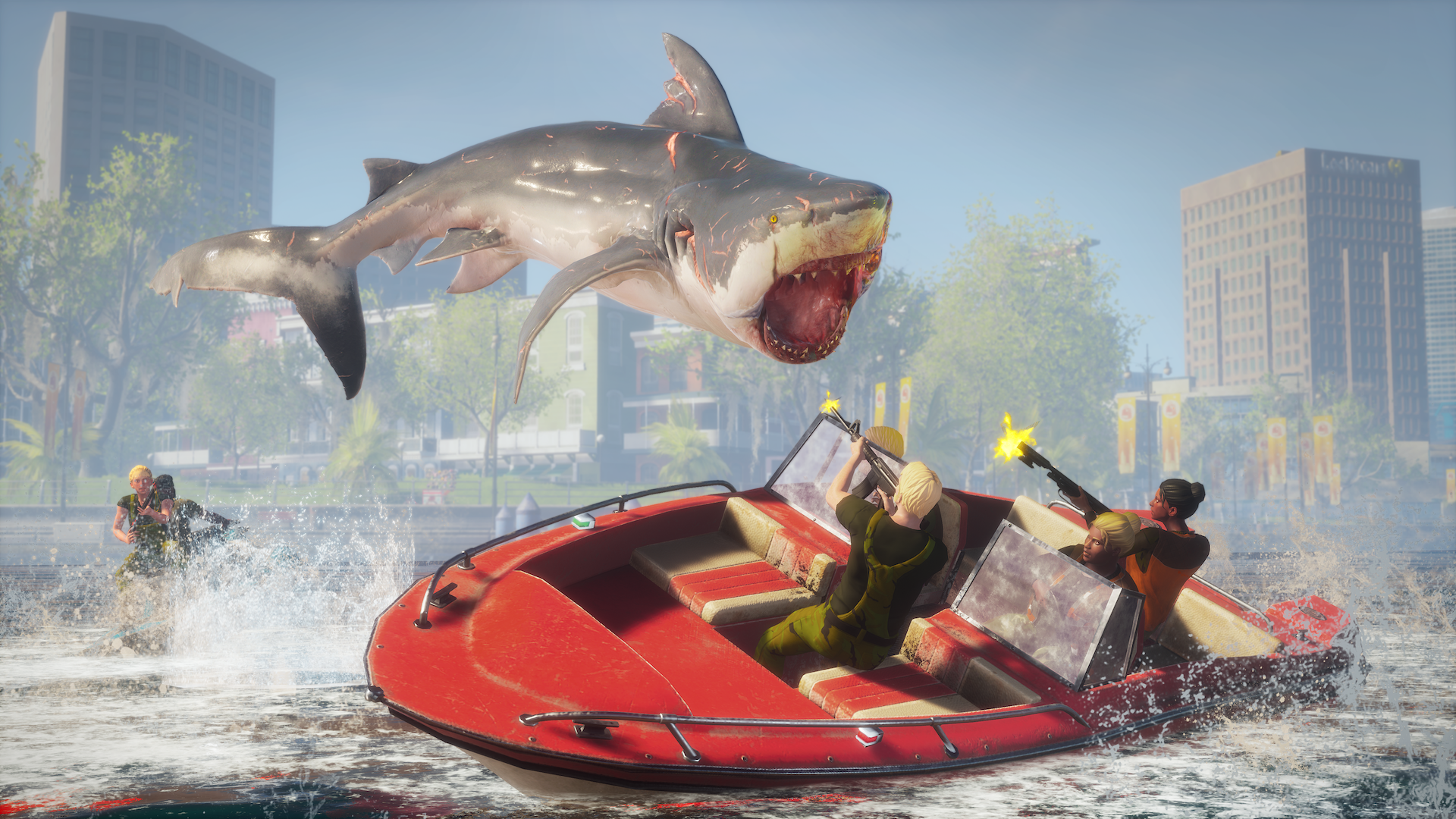 Players start out with the shark in infant mode, eating small fish and turtles as you learn the basics. You swim around the murky waters, seeking shelter where you can level up when the time calls for it. But as your skills become better, you can start chowing down on the likes of barracudas, mako, and gators. It’s when you can add humans to the menu when the real fun begins!

You get a taste of the fun in the game’s intro, as you control the mother bull shark and eat fat & dumb swimmers in its turf. However, in the main game, Maneater puts together a Grand Theft Auto-styled system when it comes to human consumption. You can have a nibble here and there with no issue (but where’s the fun in that?!), but after you have a decently-filled belly, the hunters will come your way. Sure, running away is an option, but when there’s no penalty to chow down, you may as well make the waters as red as possible! 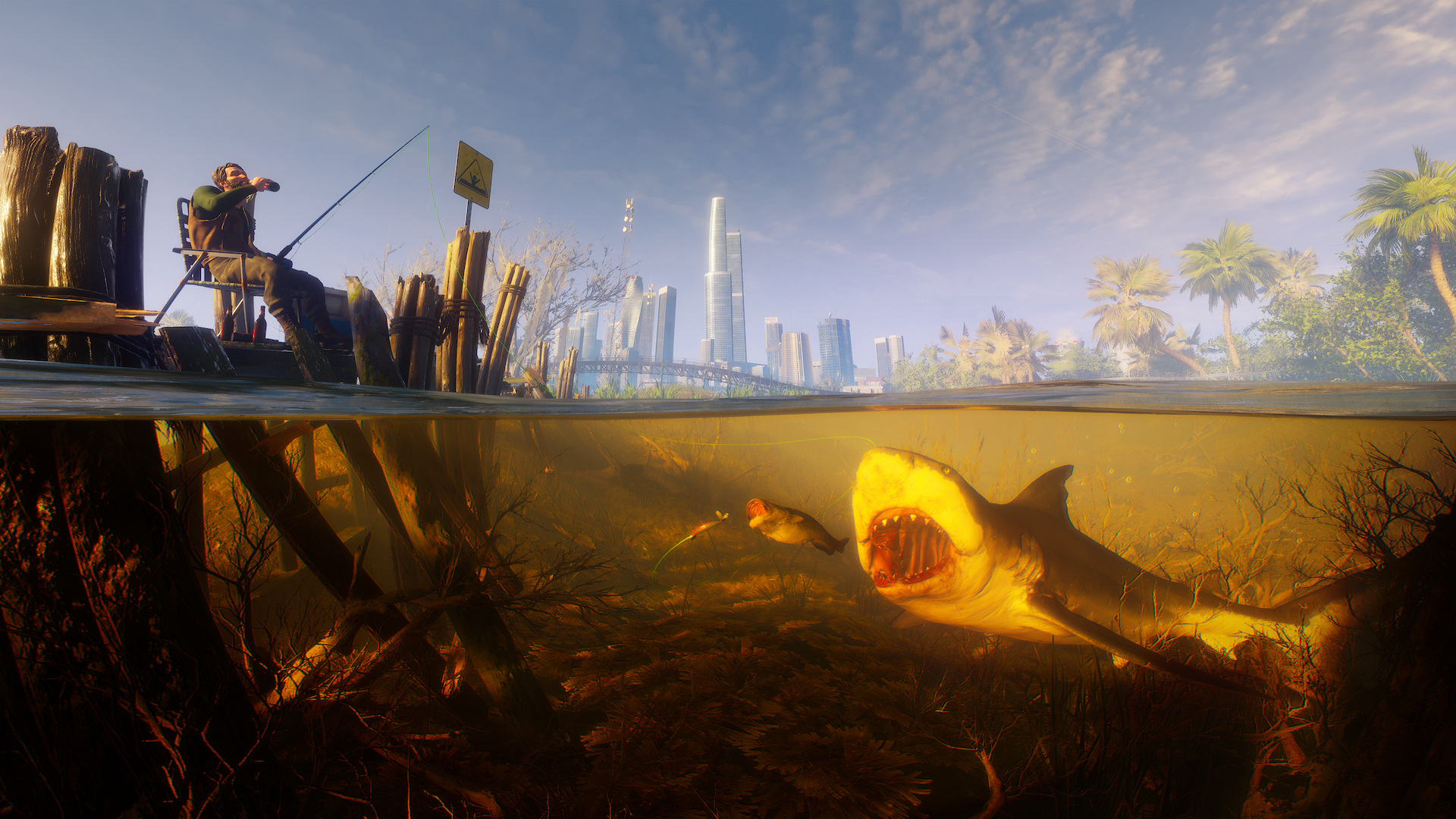 And like in Grand Theft Auto, the mayhem in Maneater never gets old! Sometimes, instead of completing missions and side quests, I spent hours just finding humans, making them my meal, and causing as much chaos as I could! There’s something truly funny about watching a shark sneaking up on a couple in a flamingo boat, and ruining both their date and their lives! It does get tough when the hunters arrive and start shooting you, but what’s wrong with a little challenge?

As you play, there will be a hit list of sorts of other hunters to take care of, leading up to Scaly Pete. Early boss fights can be fairly easy, but the bigger their number, the bigger their crew. Larger shark-hunting parties can be extremely difficult, which is why it’s important to both level up and equip your skills. Maneater takes an RPG approach to these skills, with the ability to upgrade your teeth, sonar, and even use abilities from other shark species. It’s a very good system, one that puts a bigger focus on fun rather than grinding. 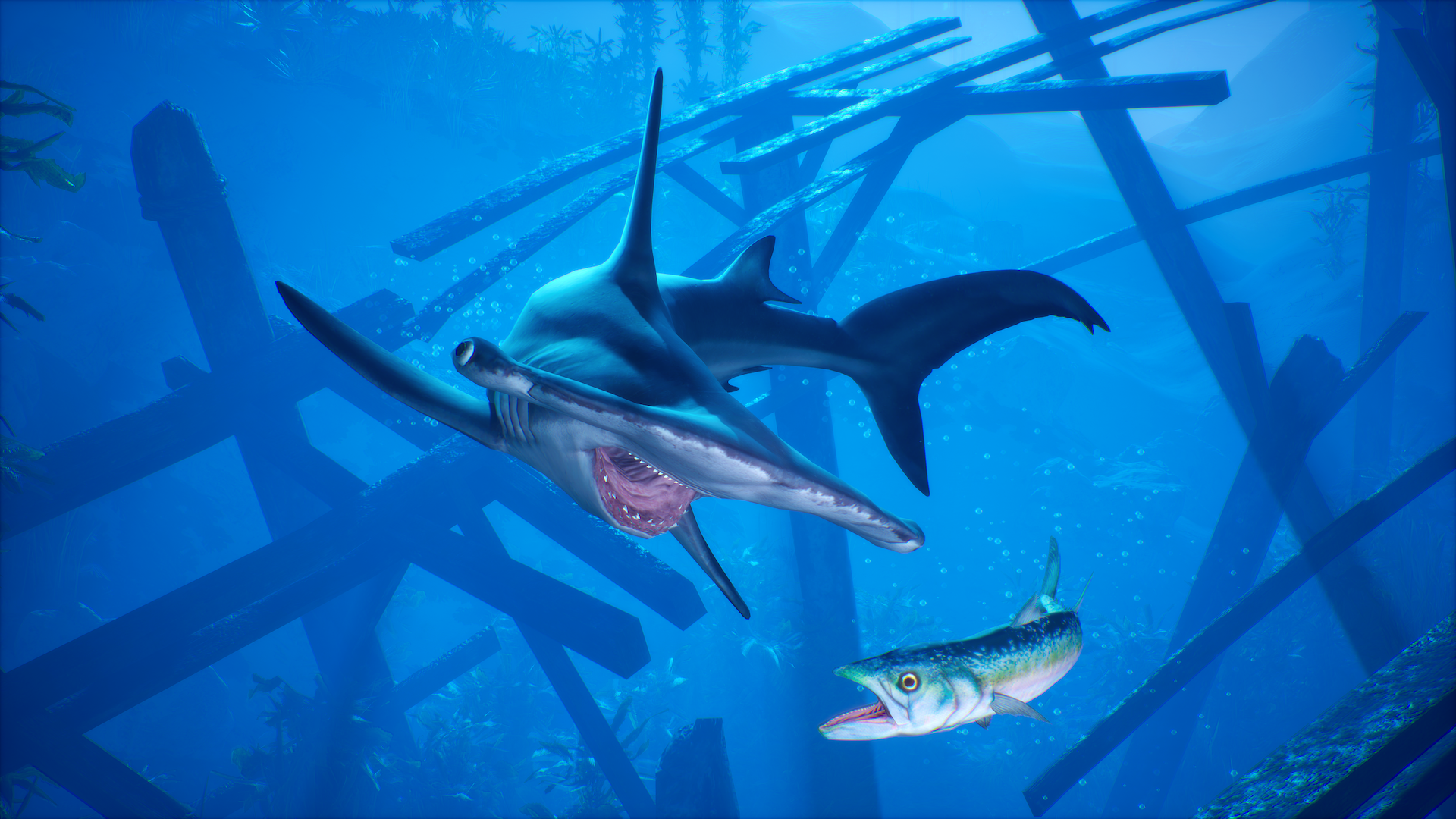 Besides humans and hunters, players will also be able to take down the waters’ other big creatures. If you’ve ever wanted to see a shark fight a whale or a gator, then this is the game for you! Early battles in Maneater can be a little unfair, but once you’ve leveled up enough, you can grab on to these other beasts, give them a good shake, and turn them into ocean jerky. (It’s a little irking when big-leveled animals are in the early levels, as if the game’s trying to make an example for you.)

Adding to the fun is its story. The game takes the form of a Discovery/TLC show, as it follows Scaly Pete’s quest to hunt you. As the bull shark throws more chaos at him, the hunter starts to lose his mind in wild ways. Actor Chris Parnell (Archer, Rick & Morty) narrates the action, mixing facts with quips and hilarious one-liners. 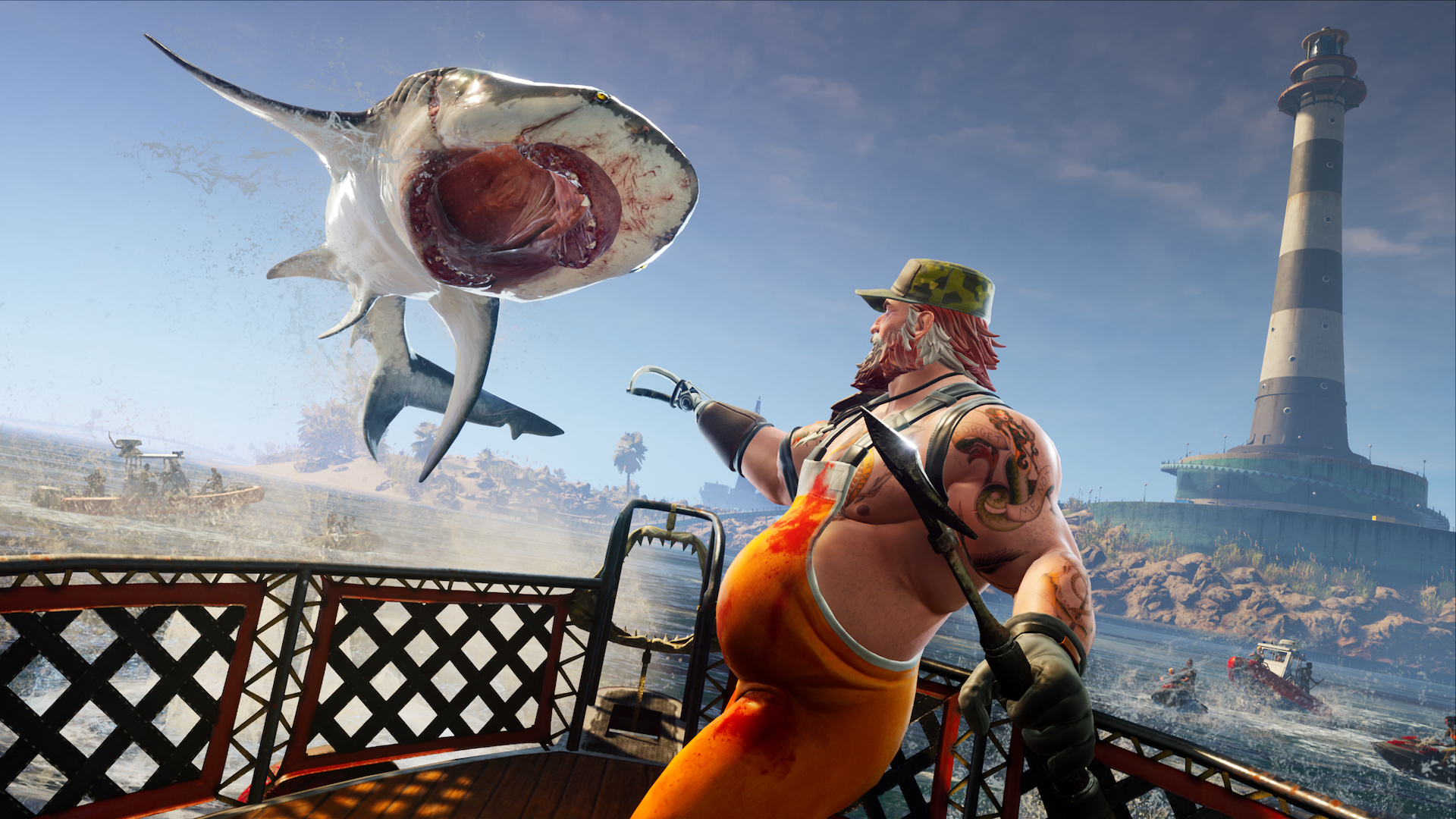 Unfortunately, not everything is sunshine and blood-soaked rainbows in Maneater. The game can be very hard to control when in battle mode. Tackling bigger fish and other prey can cause the screen to spin around like a washing machine, causing you to get a little dizzy during the fight. This also causes the angle of your view to become obscure, to the point where one cannot differentiate between directions. (It also doesn’t help that its map isn’t as detailed about certain areas, which makes maneuvering through underwater mazes a pain.)

Maneater can take about ten hours to complete. Sadly, once you finish the game, there isn’t much to do. You can’t revisit old quests and side-missions, nor can boss battles be replayed. However, eating humans never loses its fun, so it can be a good game to return here and there when you need to blow off steam. (DLC will be coming later this summer, so the wait to find a reason to truly return won't be for long.)

If you ever wanted to be a bloodthirsty shark, then Maneater is the game for you! The elasmobranch-meets-human adventure is funny, violent, and filled with plenty of deep water terror you can craft. Although the controls take getting used to, the overall experience you’ll have with Maneater will leave you with a sharp-toothed grin!

Promotional consideration provided by Riley Smith of ONE PR Studio. Reviewed on the PC via Steam.

ANIME REVIEW | A Wild Ride Inside...