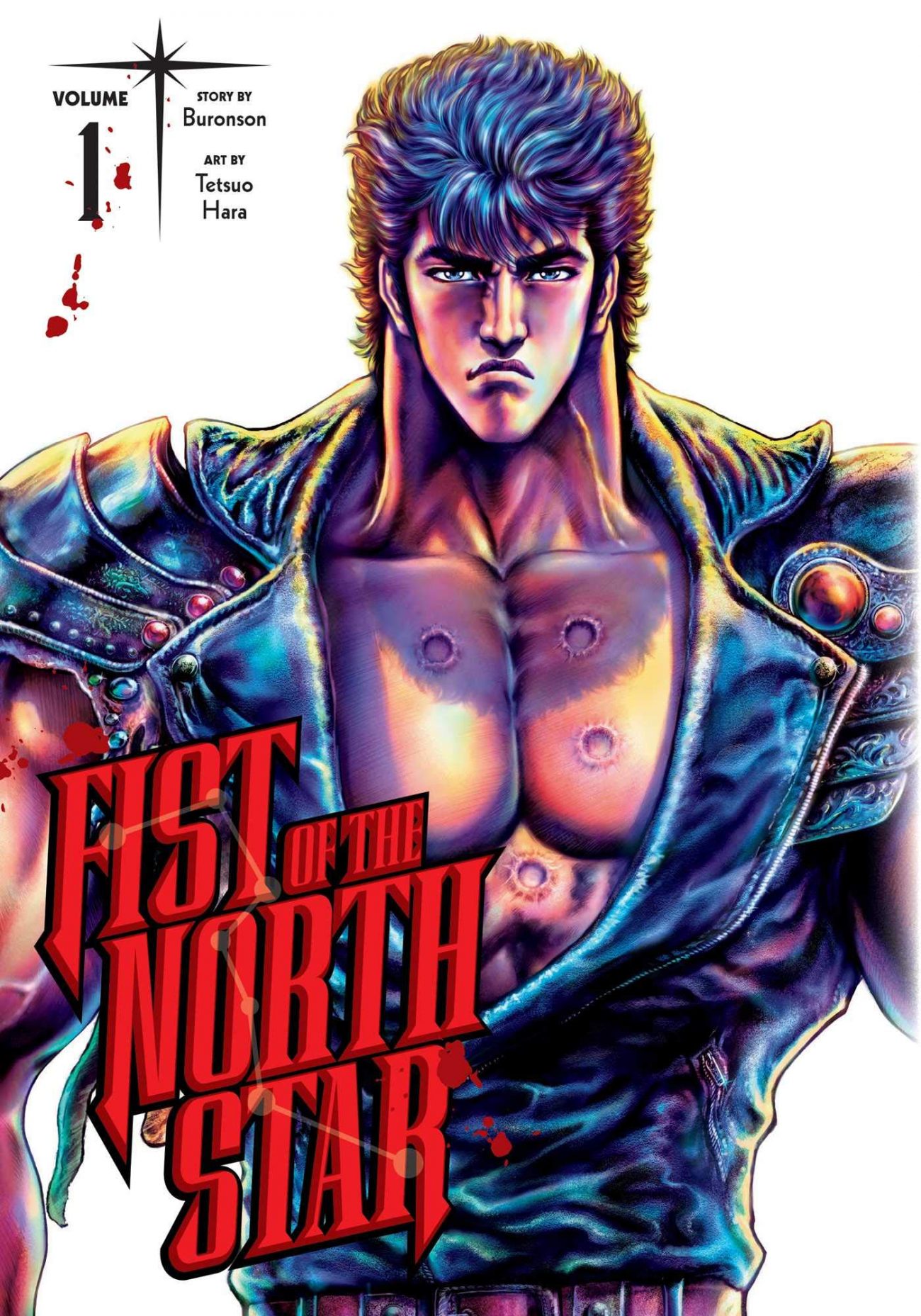 Before the Joestar Family learned about Stands, before Goku learned the Kamehameha, and even before Guts joined the Band of the Hawk, there was Fist of the North Star’s Kenshiro. Created by illustrator Tetsuro Hara and writer Buronson, the post-apocalyptic journey of the world’s greatest defender is — to this day — the highest grossing manga of all-time! While Go Nagai may have created the concept of hardcore manga with Devilman, Hara and Buronson perfected the formula with this series. Now nearly forty years since it was published in Japan, Kenshiro finally lays waste to America with VIZ’s release of Fist of the North Star.

Taking some inspiration from Mad Max and — of all things — Chinese acupressure techniques, Fist of the North Star takes place in a world where violence rules. No man, woman, or even child is safe from the roughest, toughest musclemen that roam the harsh deserts. Enter the lone warrior Kenshiro, whose seven-point Big Dipper scar on his chest is a warning to all who see it. With his fast fists and legs, any foe that stands in his way quickly finds themselves dead before the fight even begins. 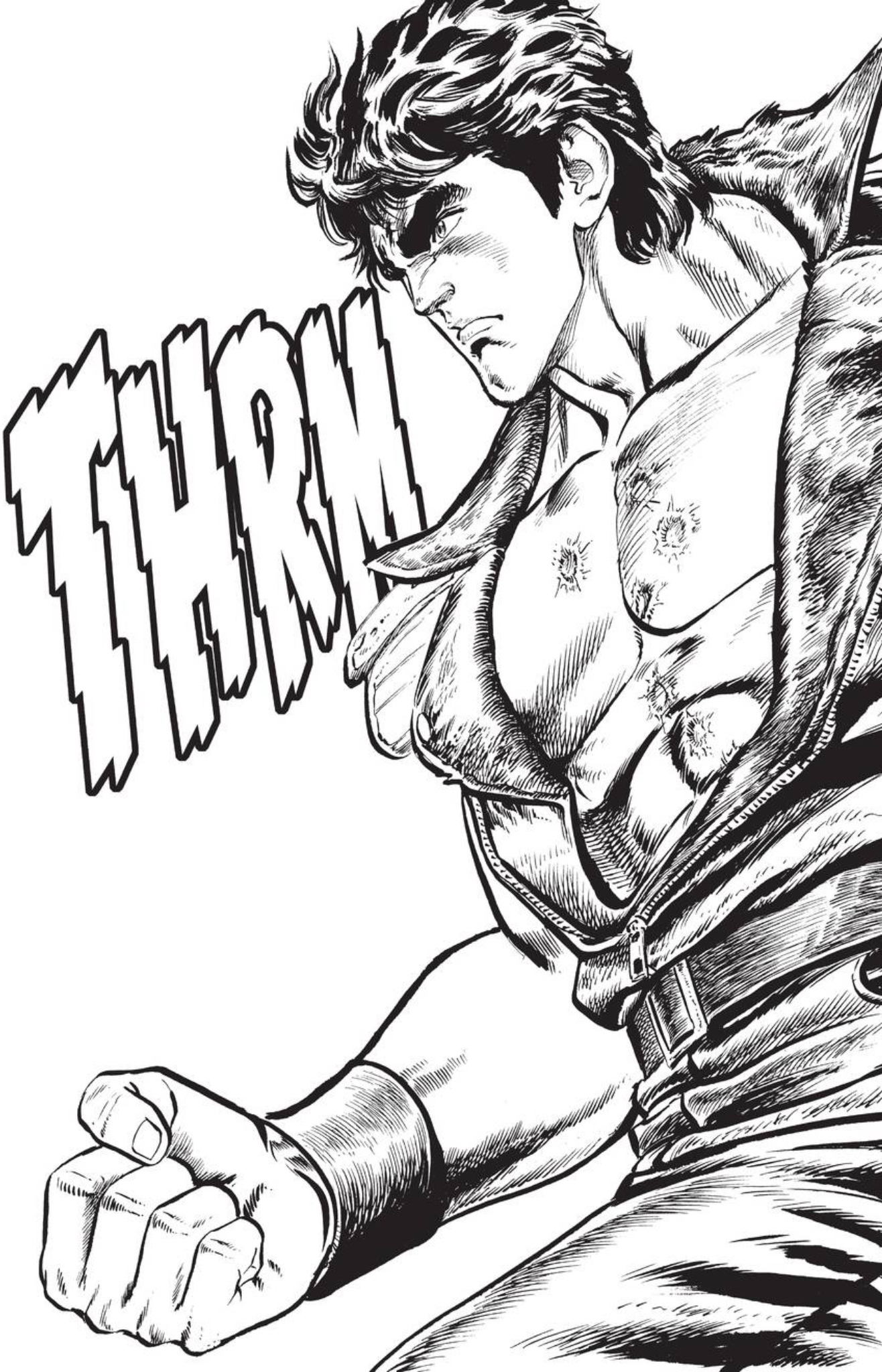 The story begins with how Kenshiro and the young Bat first meet in a dungeon. After making their escape and rescuing their friend Rin, the two allies make their way through the desert to bring justice to a world drowning in its own blood & carnage. Their first point-of-interest is Southern Cross, where an old foe of Kenshiro awaits his return. But waiting alongside him is the woman our hero has waited far too long to be reunited with!

It’s easy to see what made Fist of the North Star one of the most iconic series ever created. Right from the start, readers are brought to a desolate and vile world filled with the worst of the worst. When things all look bleak, Kenshiro arrives like the savior these poor and weak people have been waiting for. Of course, he never gets there at the nick of time (some innocent folk get offed in the most vulgar & disgusting ways); Kenshiro saves the day just before the horror show becomes a horror anthology. 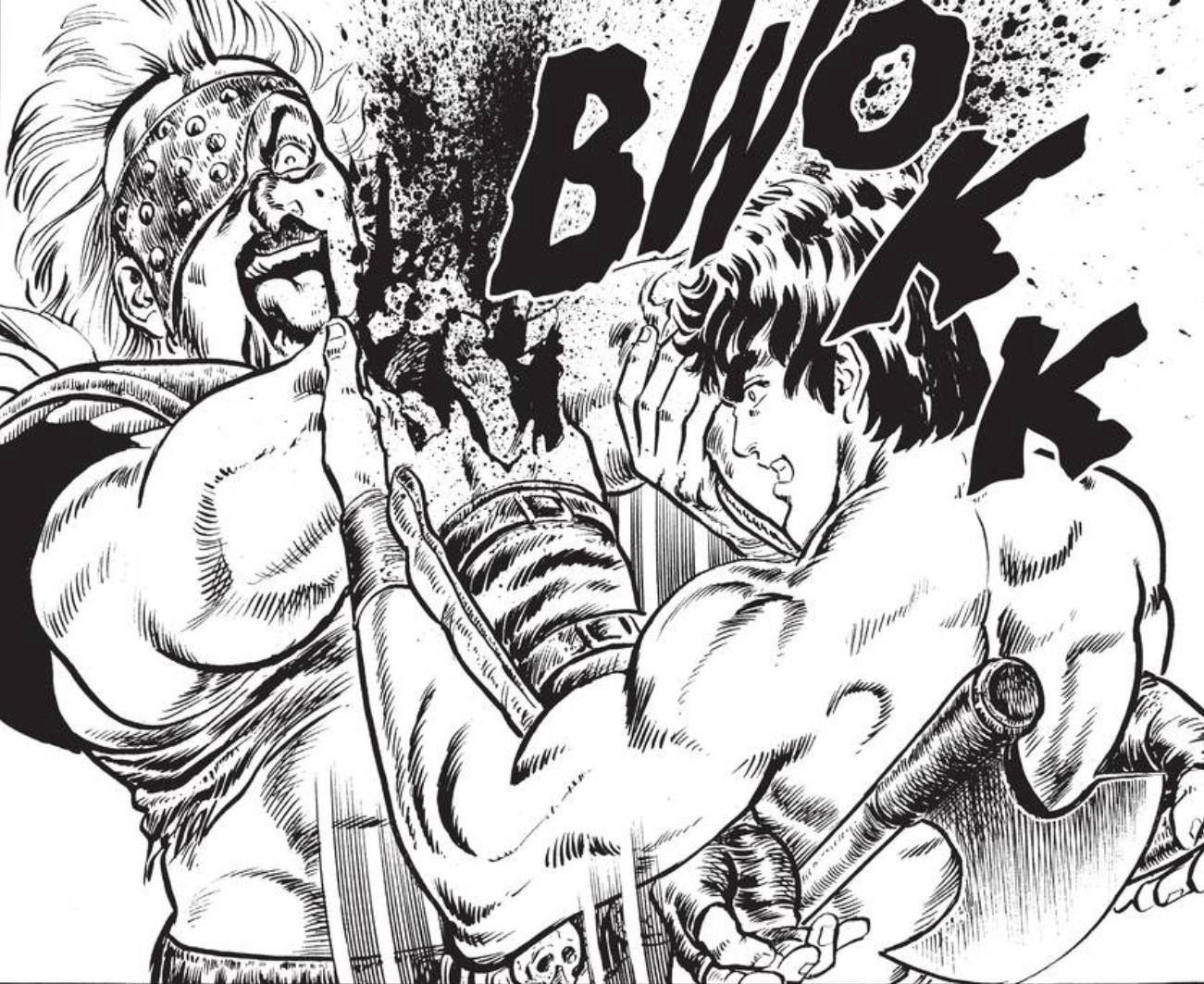 Watching as Kenshiro rips apart arms, explodes heads, and splits baddies in half is a sight that never gets old! Although he’s no Gary Stu by any means, this hero makes it clear that he will move any mountain and volcano to make sure his task is completed. This is evident in his fight against King, who has taken his beloved Yuria hostage. The pre-fight before the showdown demonstrates Kenshiro’s tactics, as he faces a foe that counters any attack he delivers. With some outside-the-box thinking, Kenshiro figures out the best way to defeat King’s fat minion, ending in an explosion of blood and guts.

This face-off against King also shows why Fist of the North Star is a story ripe with tragedy. We find that the very reason why these two battle is all for naught, as the person they wished to give the world to no longer roams their world. As such, Kenshiro must now find a new purpose for his journey, and it comes in the form of a young girl he once rescued in the volume’s beginning. His heart may be broken, but with devotion and fury, Kenshiro marches onward towards making the world right once more. 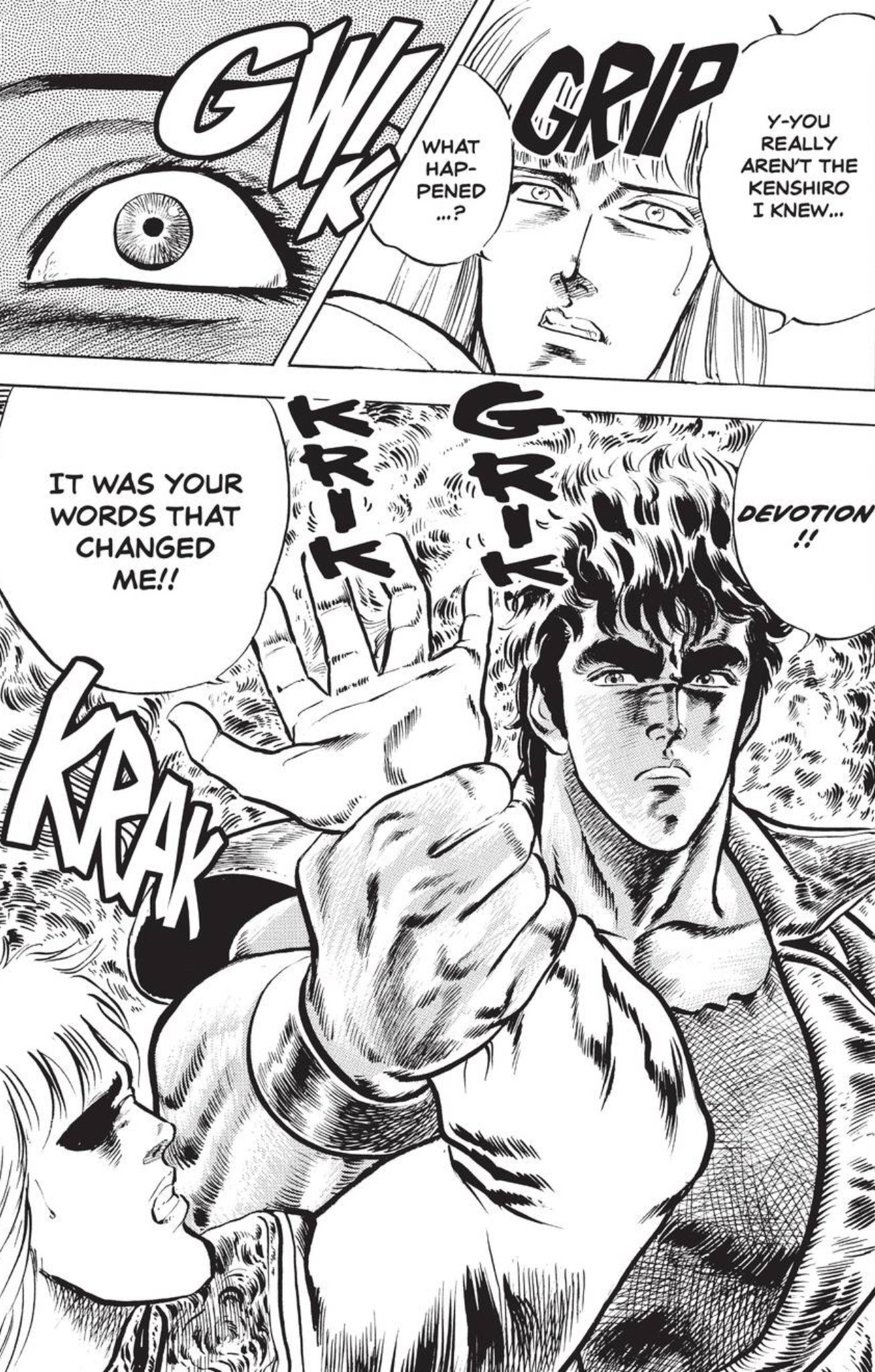 Despite this sadder element to the narrative, the series is filled with its own twisted sense of humor. Kenshiro may look like a serious fighter, but his deadpan quips will easily make any reader chuckle. We all may know his “You are already dead!” catchphrase, but his remarks towards the future dead punks and bruisers that cross his path will cause anyone to snicker like a little kid. (Perhaps this is why Akira Kamiya was the perfect man to voice Kenshiro, who captured his warm heart and cold exterior as perfectly as he did with the badass and horndogginess of City Hunter’s Ryo Saeba.)

Those who have sat around just hearing about Fist of the North Star now have their chance to experience it themselves in all of its glory. Even after nearly 40 years, Kenshiro’s journey still packs as big a punch as ever! Although we are merely beginning the story here in its first volume, what’s been laid out already shows that Fist of the North Star’s got enough electricity to power a second-world country! If you’ve yet to see why everyone on the internet loves to utter “Omae wa mo shinderu!”, then you best strap yourself in and experience the story that’s about to unfold… 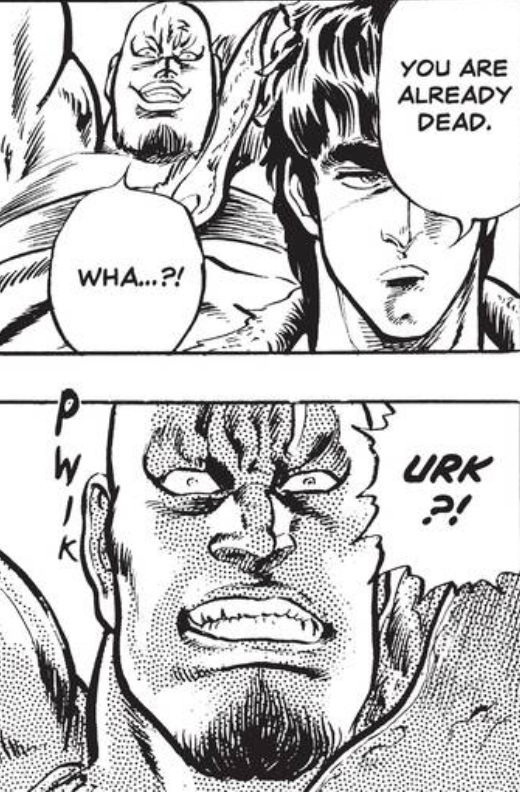