HomeAnimeANIME REVIEW | "Bloom Into You" Finds One’s True Self

ANIME REVIEW | "Bloom Into You" Finds One’s True Self 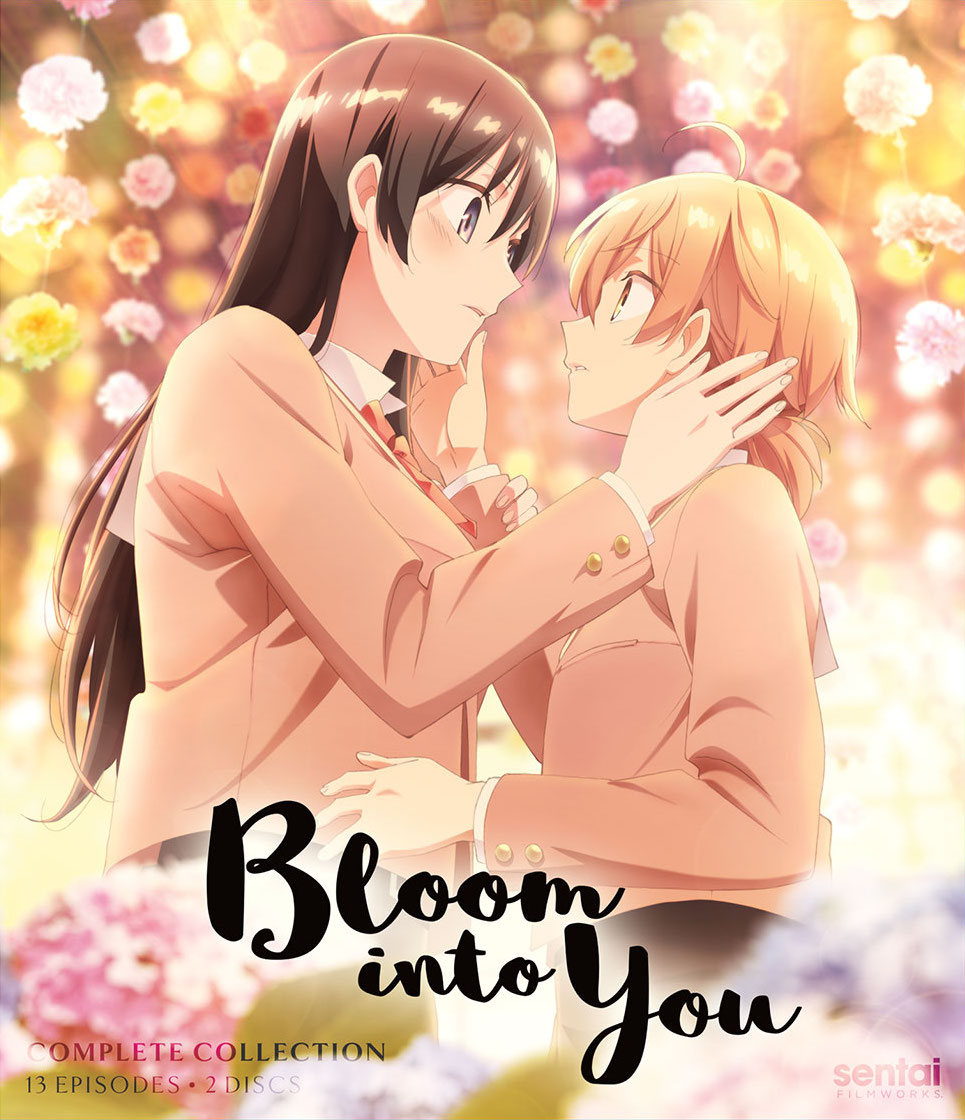 ANIME REVIEW | "Bloom Into You" Finds One’s True Self

Imagine being pressured into becoming something you’re not. Despite your internal conflicts, the world around you forces you to transform into a person that’s the polar opposite of the real you. Think what it’d be like to be a shy individual that does what you can to blend into the background, who’s then forcibly thrusted into the center stage as a replacement for someone else. The character of student council president Touko Nanami (Minako Kotobuki/Luci Christian) in Bloom Into You has such a burden placed onto her shoulders, as she experiences life in the high school limelight against her true nature.

At first, she appears to be an understanding and open individual, helping out fellow students and even turning down love confessions in the most heartfelt ways. That’s when Yuu Koito (Yūki Takada/Tia Ballard) enters the picture, who's somewhat tricked into looking into working in the student council. Yuu is going through a rough phase in her life, as she ponders over a love confession she received despite not knowing what true love feels like. Touko assists Yuu with turning the boy down, only for her to start having feelings for Yuu. Somewhat confused, Yuu decides to let Touko fall for her, even though she may not be able to reciprocate those same feelings in return. 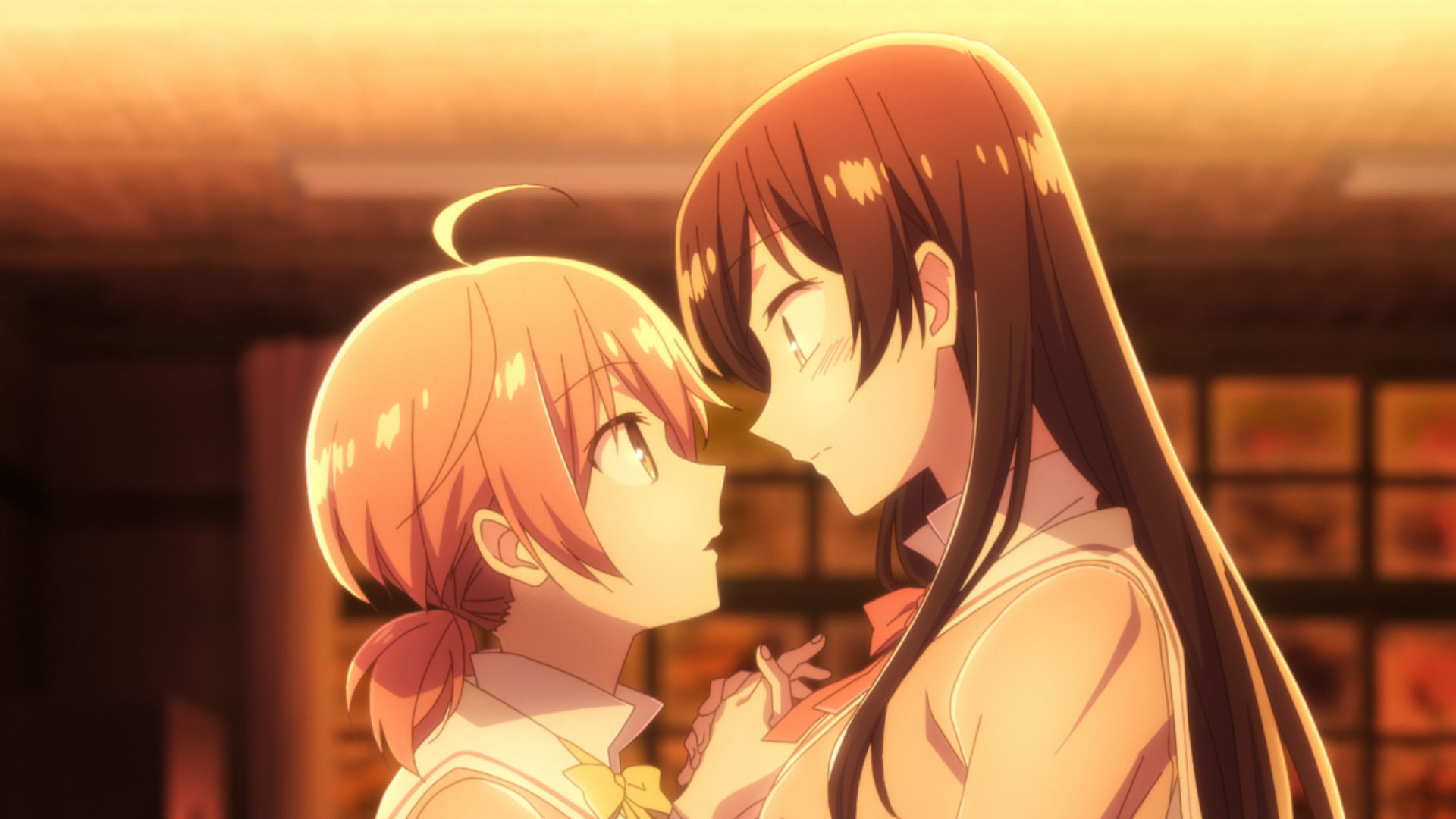 Soon after the student council elections, Touko comes up with an idea to do a play during the school’s cultural fair. It’s here where Yuu discovers the internal conflicts that Touko is dealing with, as she attempts to revitalize something that her older sister never got the chance to do. As such, it creates a slight rift between Yuu and Touko, with the latter asking to fall in love with former, and the former being told not to do the same. As the story goes on, Yuu does her best to bring out the real Touko from within, with the aid of the president’s childhood friend Sayaka (Ai Kayano/Shanae’a Moore) and the aspiring writer Koyomi (Konomi Kohara/Brittney Karbowski).

There are quite a lot of layers to Bloom Into You, as it teeters between two stories involving conflicts with the heart. The somewhat one-sided romance between Touko and Yuu forces the latter to dig deep into her well-being and search for her true desires. At first, it would seem weird for Yuu to let Touko kiss and embrace her in ways that she herself has no idea how to feel. However, with every moment spent with Touko and getting to know the real her is a big leap towards what she truly wants for herself. Even more impressive is how the anime manages to frame Nio Nakatani’s original manga without using the need of using some of the eye-rolling tropes that most yuri series tend to fall victim to. 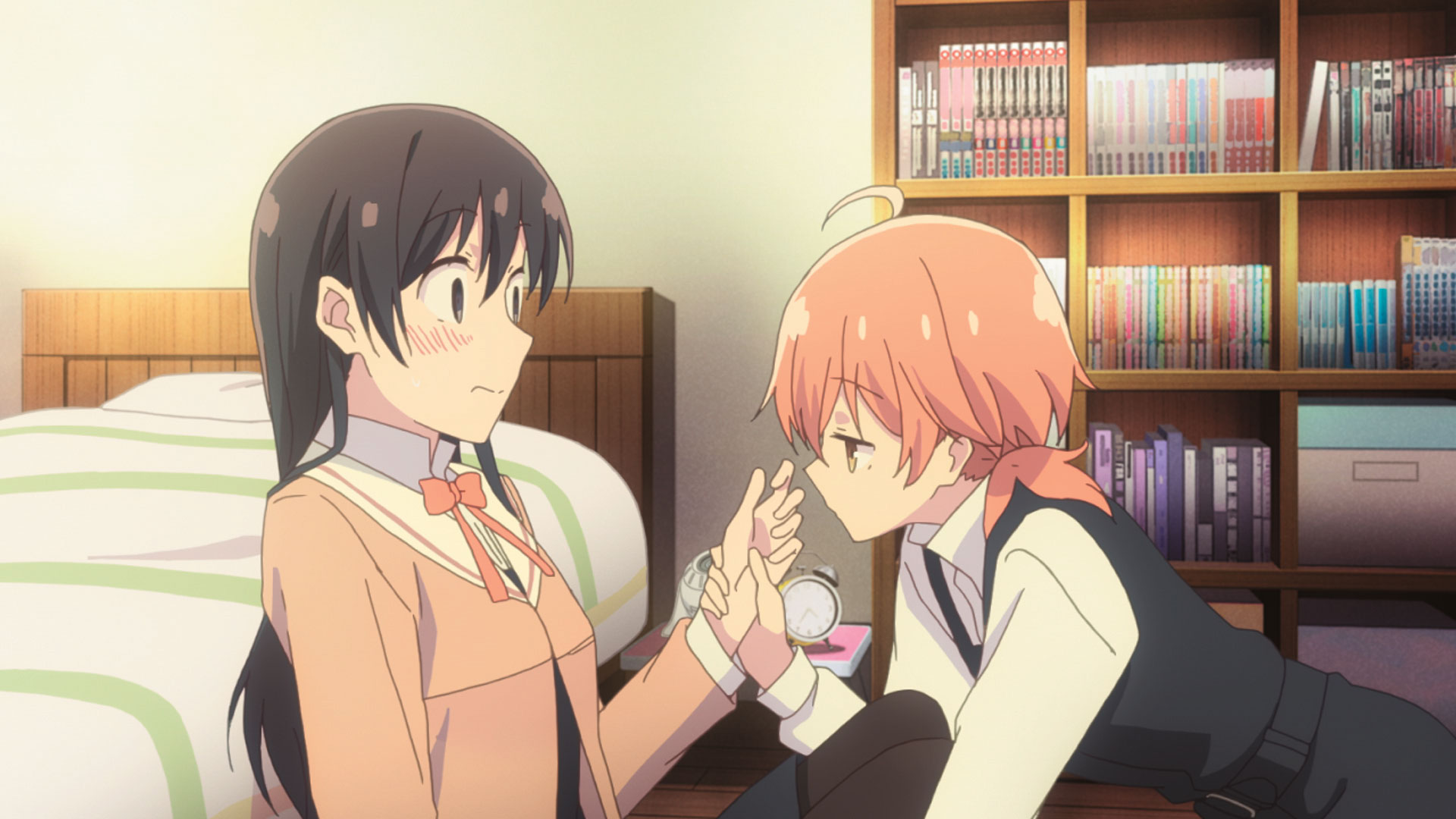 The series takes its time with letting the romance blossom between Yuu and Touko, never rushing towards the goal that’s normally placed near the end of a yuri’s first episode. Instead, it gives the characters breathing room, expands the world they roam in, and lets events and emotions develop naturally. Yes, Touko may jump the gun here and there, but it doesn’t grind the story to a halt; quite the contrary, it actually pushes the narrative forward. Each episode awakens something new from within Yuu, and — at the same time — slowly unveils the true person that Touko is.

One of the big themes of Bloom Into You is the fear of being something that society doesn’t want you to be. For Touko, that someone is her true self, whom she had to cast away when her parents and those close to her force her to continue where her sister stopped. This forces Touko to hate her true self, with Yuu doing her hardest to let her know that her true being is who she feels for the most. The character of Sayaka also deals with this fear, as a past romance with another girl in middle school winds up being “just a phase” for the partner and her true awakening for her. 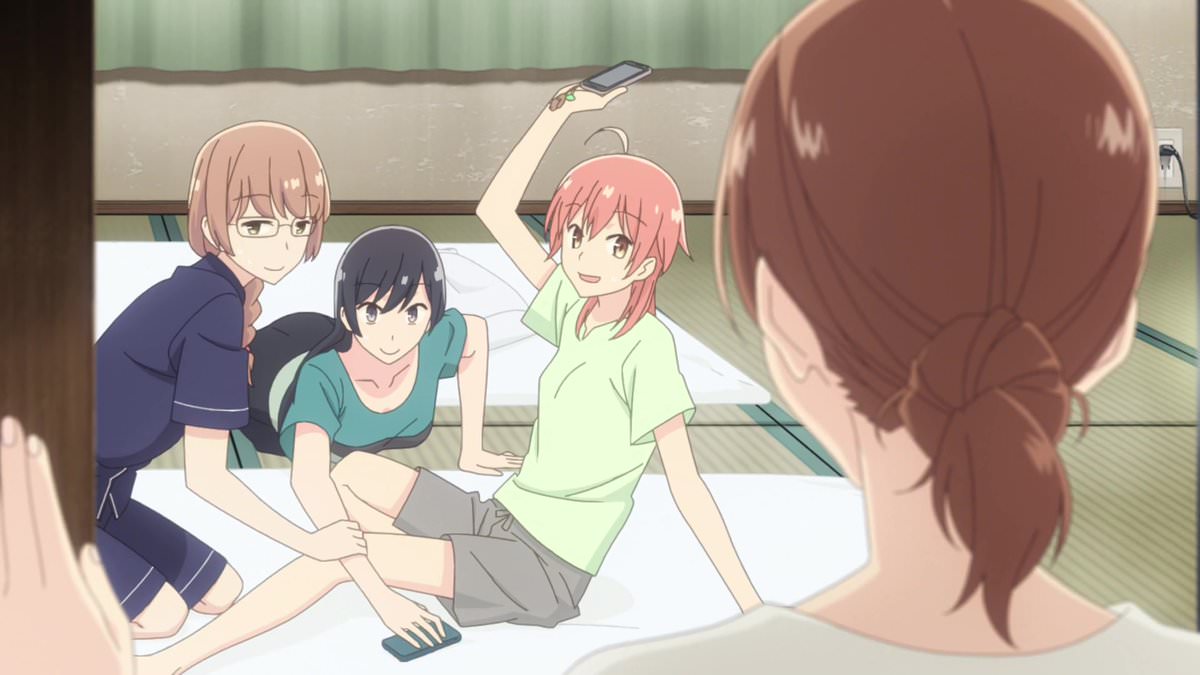 (WRITER'S NOTE: Regarding Sayaka’s situation, there’s a stigma in Japan where some same-sex relationships are thought to be okay, so long as “they grow out of it” later on down the line. It’s a troubling mentality for those who are in the LGBTQ community, as it makes their genuine love seem less acknowledgeable compared to straight relationships. Thankfully, albeit slowly, parts of Japan are starting to recognize same-sex relationships and those who are gay. However, there’s still more work to be done, especially when it comes to transgendered rights, which are mentioned in great detail in Chii's autobiographical manga The Bride Was a Boy.)

Every step taken within Bloom Into You is done so with much care and consideration. Never does it go the fan-service route with the lesbian romances, instead doing their best to make these characters and emotions feel a lot more genuine. It also helps to have supporting characters that push the progress along smoothly, especially with club advisor Riko Hakozaki (Mai Nakahara/Patricia Duran) and her café manager girlfriend Miyako (Nanako Mori/Samantha Stevens) dishing out advice when needed. (Seriously, can there be a spinoff made about these two?!) 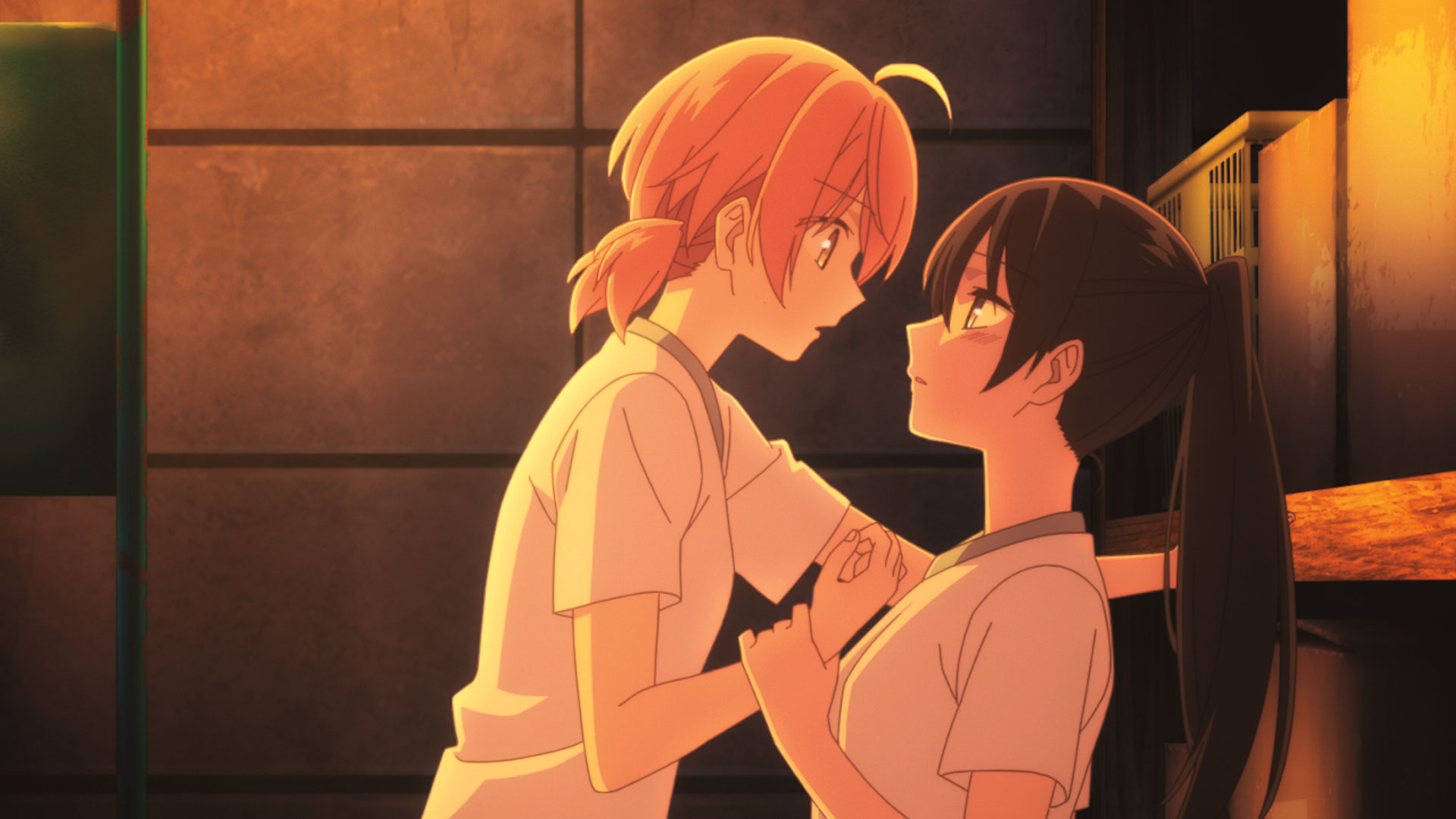 With that being said, it should be noted that the end of the Bloom Into You anime finishes before the story is actually through. This may frustrate some, especially those who might want to know how the play turns out. There’s always hope for it to return, but for now, those who wish to find out what happens at the end will have to read the manga. (Thankfully, Seven Seas Entertainment licenses it in America.)

Most impressive about the anime is its visual style. Animated by TROYCA (Re:Creators), every frame that’s brought to the screen is filled with a tremendous amount of beauty. Not only do the characters and worlds look gorgeous, but how scenes are presented and even tinted add an extra dose of character and emotion to a series already brimming with so much! The sheer amount of detail placed into Bloom Into You is something you normally see being saved for the big screen, giving way to the most impressive art seen in a yuri series since Yurikuma Arashi! 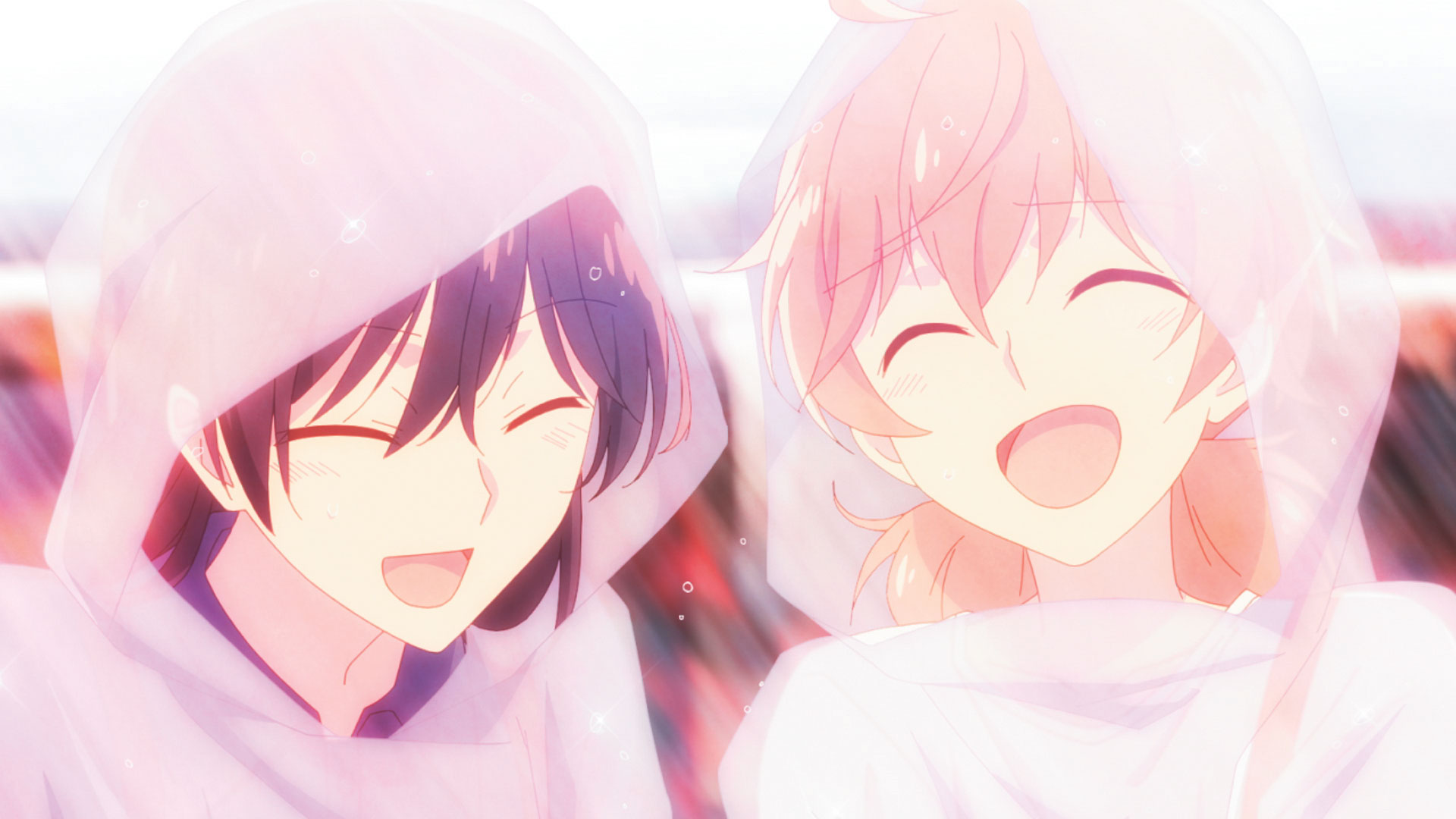 Both the Japanese and English voice casts bring the same amount of emotion and energy as the animation does. However, Sentai Filmworks’s dub is perhaps the publisher’s best work to date. Luci Christian brings a genuinely conflicted character like Touko to a truly relatable level, even if each new revelation is but another heavy layer for the character to deal with. As Yuu, Tia Ballard blossoms through all the stages of feeling love, from the cold uncertainty times to when her heart finally bursts to life.

The anime’s soundtrack by Michiru Ōshima (The Night Is Short, Walk On Girl, Little Witch Academia) is a fine mixture of piano pieces and small string sections, adding an extra feeling or two to some of the show’s most compelling scenes. Opening theme “Kimi ni Furete” by Riko Azuna fits perfectly with the tone of the anime, delivering a heartfelt melody that plays well to the hearts of both Yuu and Touko. Speaking of which, the closing theme “hectopascal” by their Japanese actresses Yūki Takada and Minako Kotobuki is an outstanding electro-pop song that stands toe-to-toe with some of J-POP trio Perfume’s best works. 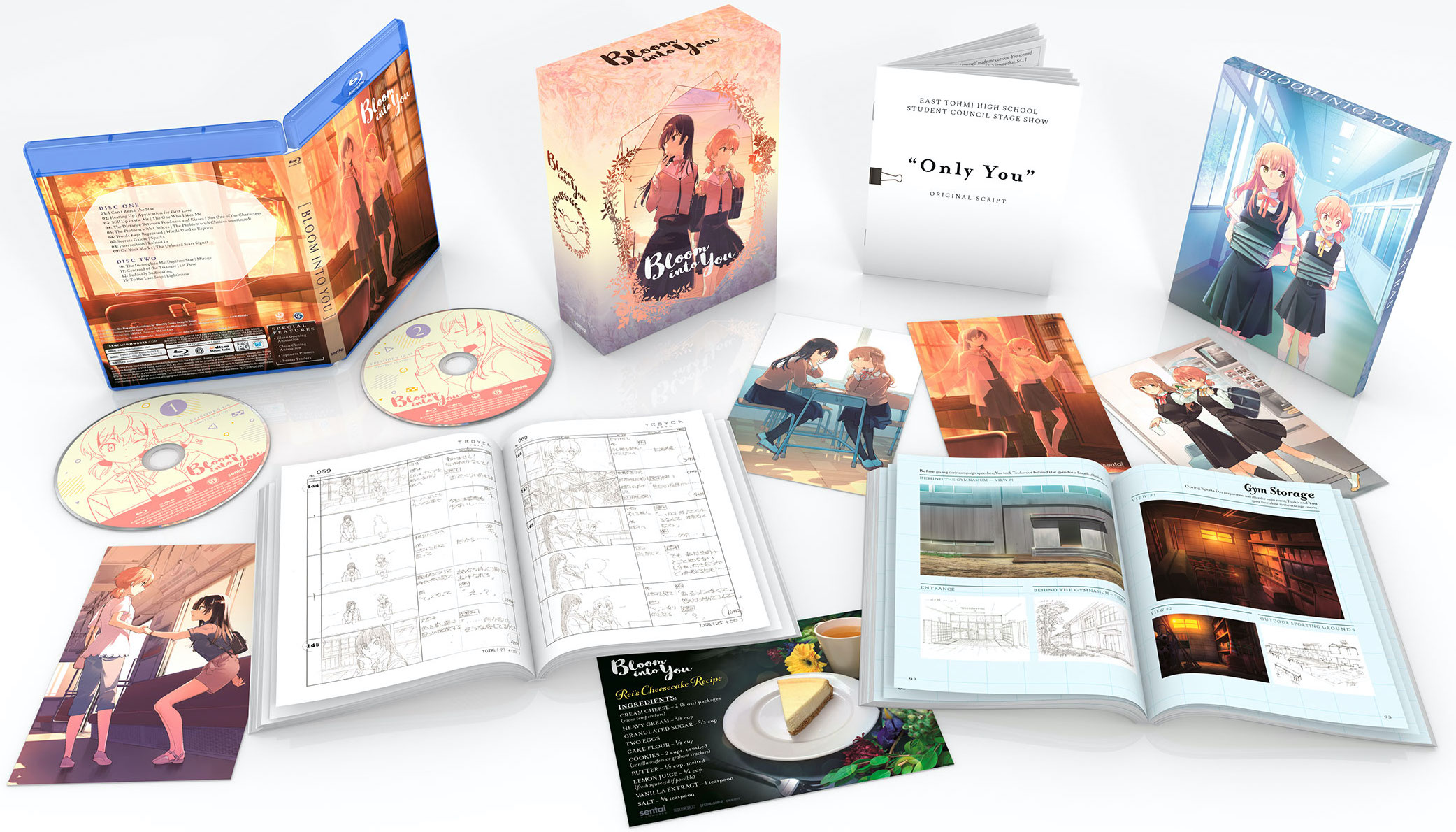 While the Blu-Ray itself lacks any true extras outside of clean openings and endings, the Special Edition of Bloom into You is filled with bonuses that any lover of animation would be happy to own. The entire storyboard for Episode One by director Makoto Kato showcases the work that goes into making just a sliver of an animated series, with the added bonus of the storyboards for the series’s theme songs. A second booklet dives deeper into the making of the series, with character sketches, cast & staff interviews, and a section that shows the stupendous amount of detail that’s placed into creating backgrounds and scenery. Art cards feature key scenes from the original manga and the anime, and — for those who are looking to try some culinary delights — Rei’s Cheesecake Recipe goes step-by-step into how to recreate the dessert featured in the show.

Perhaps the most interesting extra in the box set is the script for Only You, the play that the cast puts on. Penned by Nakatani, the play mirrors the internal conflict that Touko goes through in the series. It’s pointed out that the script represented here is the version before Yuu and Koyomi make the changes near the end of the anime, so it’s easy to see the unevenness of the play’s message in this version. While it would’ve been great to see the final version in print form, one can more than likely see what occurs in the original manga.

Bloom Into You is pure, honest, and — above all — never afraid to touch on some of the hardest parts of growing up and dealing with what society wants from you. The ways Touko and Yuu evolve throughout its 13-episode run are some of the finest character development you can find in any yuri series. (Its TV-PG rating also makes it a much more accessible show for anime fans of all ages.) Simply put: you shouldn’t have to wait for the hydrangeas to blossom before sitting yourself down and experiencing the heart and soul that Bloom Into You has to offer.