MANGA REVIEW | Love Conquers All In "The Bride Was A Boy" 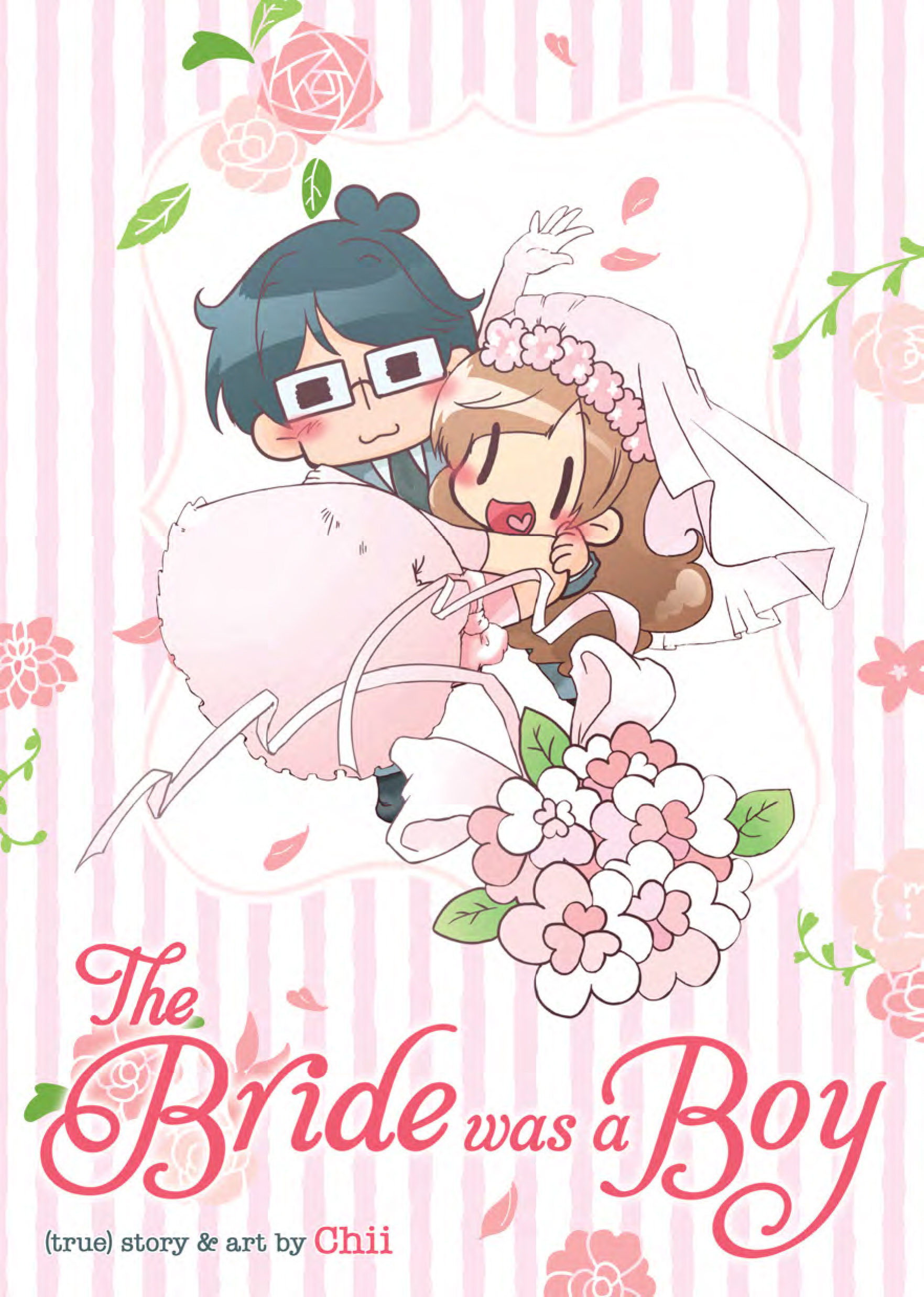 MANGA REVIEW | Love Conquers All In "The Bride Was A Boy"

It was April of 2009 when my friend came out to me as transgendered. As a person who was treated differently due to his Autism, I quickly responded with acceptance and understanding. Although coming out stories can rarely be as easy of a situation like this, a changing world with evolving perceptions can aid those who have trouble being the person they truly are. Chii's autobiographical manga The Bride Was A Boy gently taps that evolution on society's shoulder, in a way that gives those unfamiliar with these situations a better look into the lives of those going through gender identity challenges.

The Bride Was A Boy presents Chii's true life situations going from being a struggling boy to a happy wife. Its timeline jumps around throughout the manga, beginning with Chii & her beloved "Husband-kun" happily saying that they'll explain everything on how they became the loving couple they are today. Readers will see Chii growing up as a boy, trying to fit into society with a body they don't feel is right for them. It's when Chii does research on Gender Identity Disorder (GID) where they realize why they feel that way, and after years of internal struggles, they decide to slowly change for the better. Soon after Chii starts her transition, Husband-kun enters her life, and the relationship that blossoms between the two of them grows into something quite matrimonial. 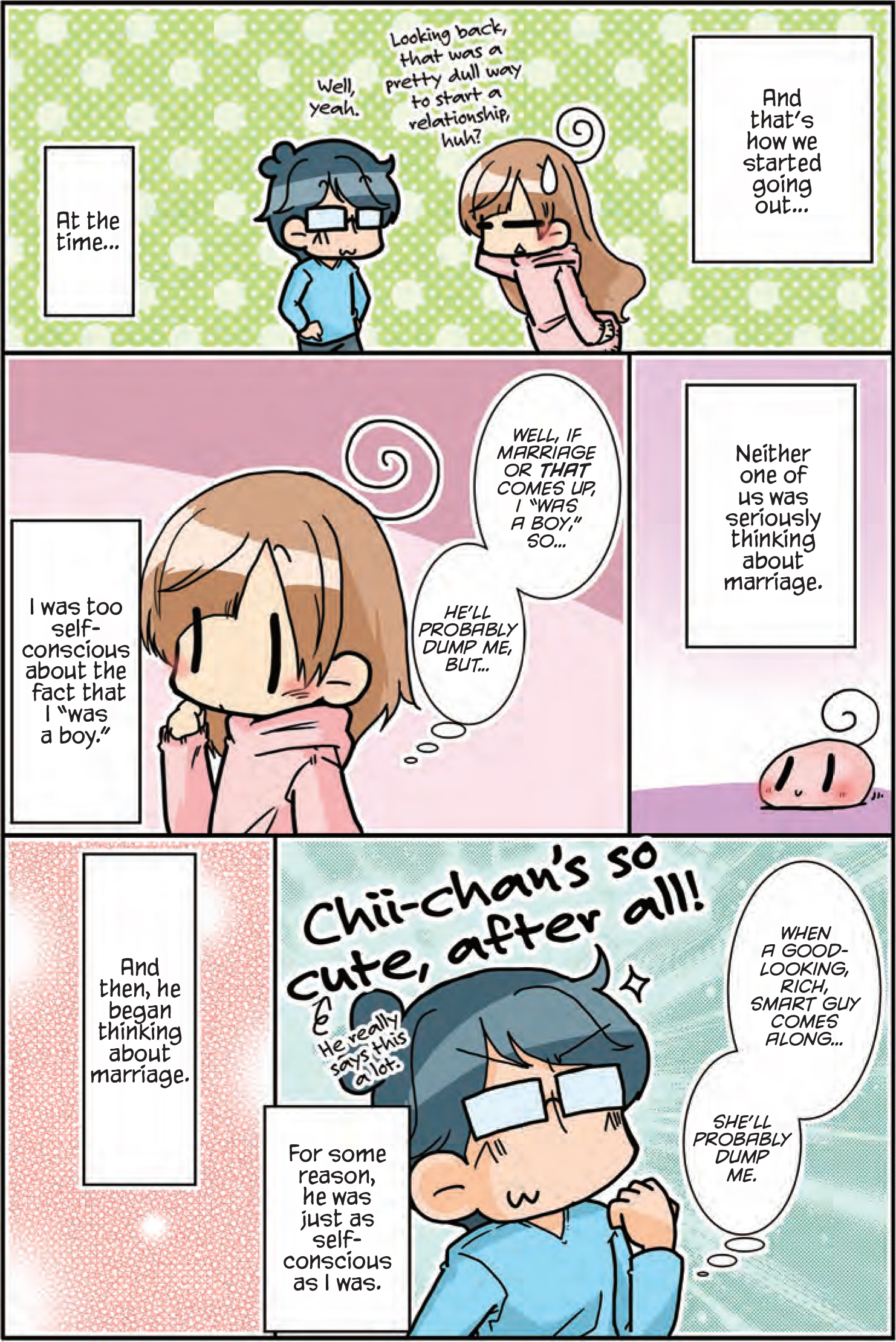 I would be lying if I said The Bride Was A Boy was an easy story to sum up, as there are many a hurdle and challenge that Chii faced in her life. Unlike Nagata Kabi's My Lesbian Experience With Loneliness, which drops you in many years after she comes out and is seemingly accepted for who she is, this manga gives you everything about what Chii experienced in her time from boyhood to womanhood. There's no holding back regarding her time as a boy confused about their body and their feelings for male classmates, nor does it skimp on the stress she felt as the transition began. It's perhaps one of the most open tales of growing up transitioned brought to comic book pages, one that has some regret, but nonetheless is fearless with its presentation.

Working in its favor is Chii's comedic means of telling her story. Rarely does The Bride Was A Boy get dark, nor does it present anything harsh or prejudice situations. Instead, she laughs about her past self, in the hopes that those going through what she did will be given a break of sorts from their day-to-day struggles. In its own way, this is a manga that hugs its reader and tells them how beautiful they are, and that no matter what life throws them, that the sun will rise and life will get better. It also helps that the story is presented in some of the cutest artwork you'll probably see in any recent manga, which certainly aids in telling a more inclusive story about those who often feel left out of society. 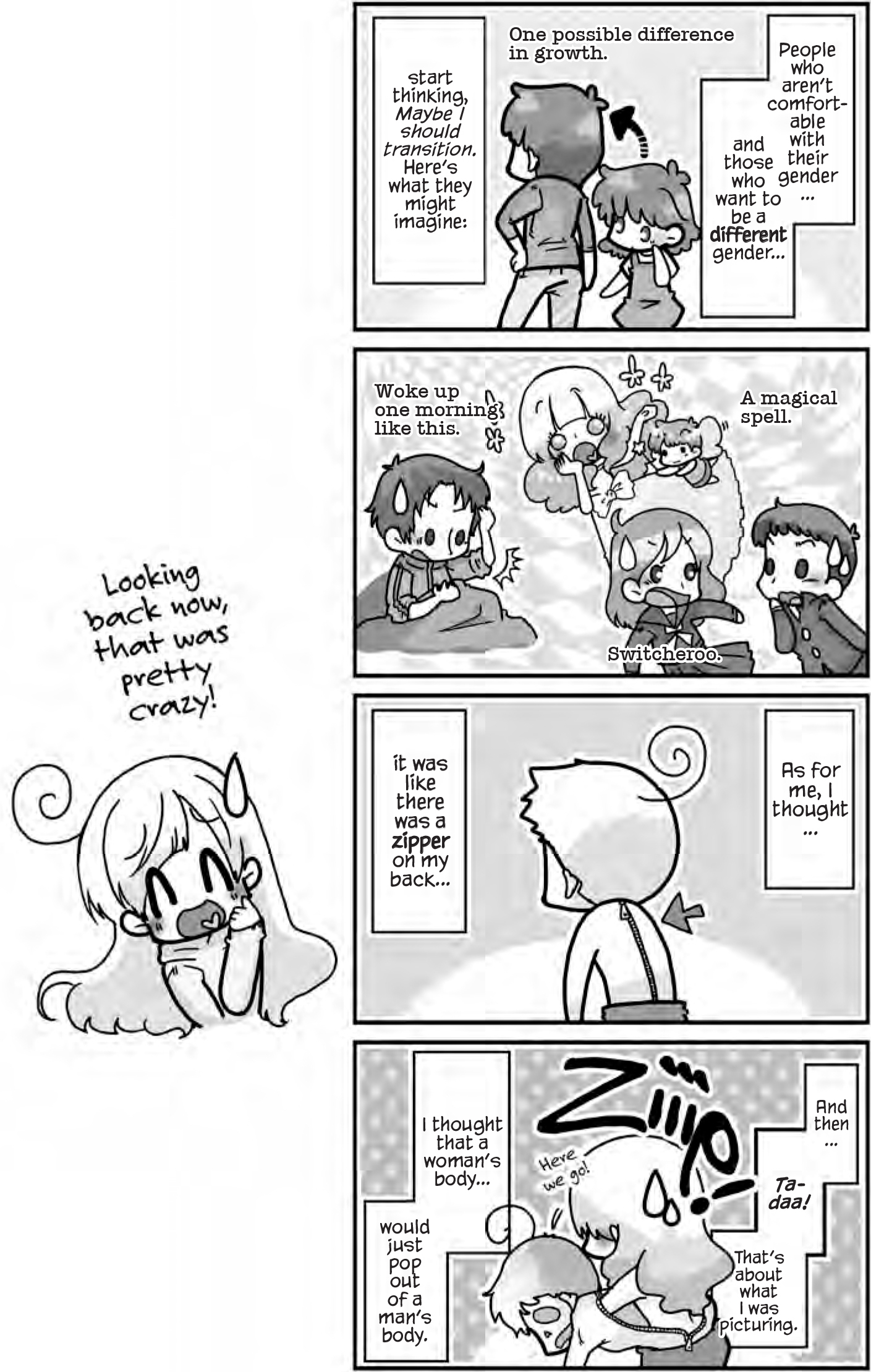 What also works is how educational this manga is, as it teaches about certain words, symbols, and phrases both current and out-of-date that are linked to transgenderism. Because of these moments, you feel like you legit learn something not just about Chii, but the community as a whole. Rarely does it reach preachy levels, even as she presents her feelings about the flaws of Japanese society and their perception on those who are gay, straight, transgendered, or any of the other identities (which, to be fair, anyone with common sense will gladly agree with her viewpoints). Instead, readers are given solid explanations about GID, the different kinds of surgeries one can have when transitioning, as well as offer some smart answers to many of the dumber questions someone who's transgendered may be asked.

Of course, it's easy to see that The Bride Was A Boy is probably one of the most best-case scenarios someone can have when transitioning. Often, I see some of my friends on social media explaining the struggles they face on a day-to-day basis. Like Sisyphus constantly pushing the boulder up the hill, these people often make progress while experiencing another unexpected hardship. Even though I've personally experienced my fair share of personal battles with Autism, deep down I know it no way compares to someone adjusting to a new gender identity. 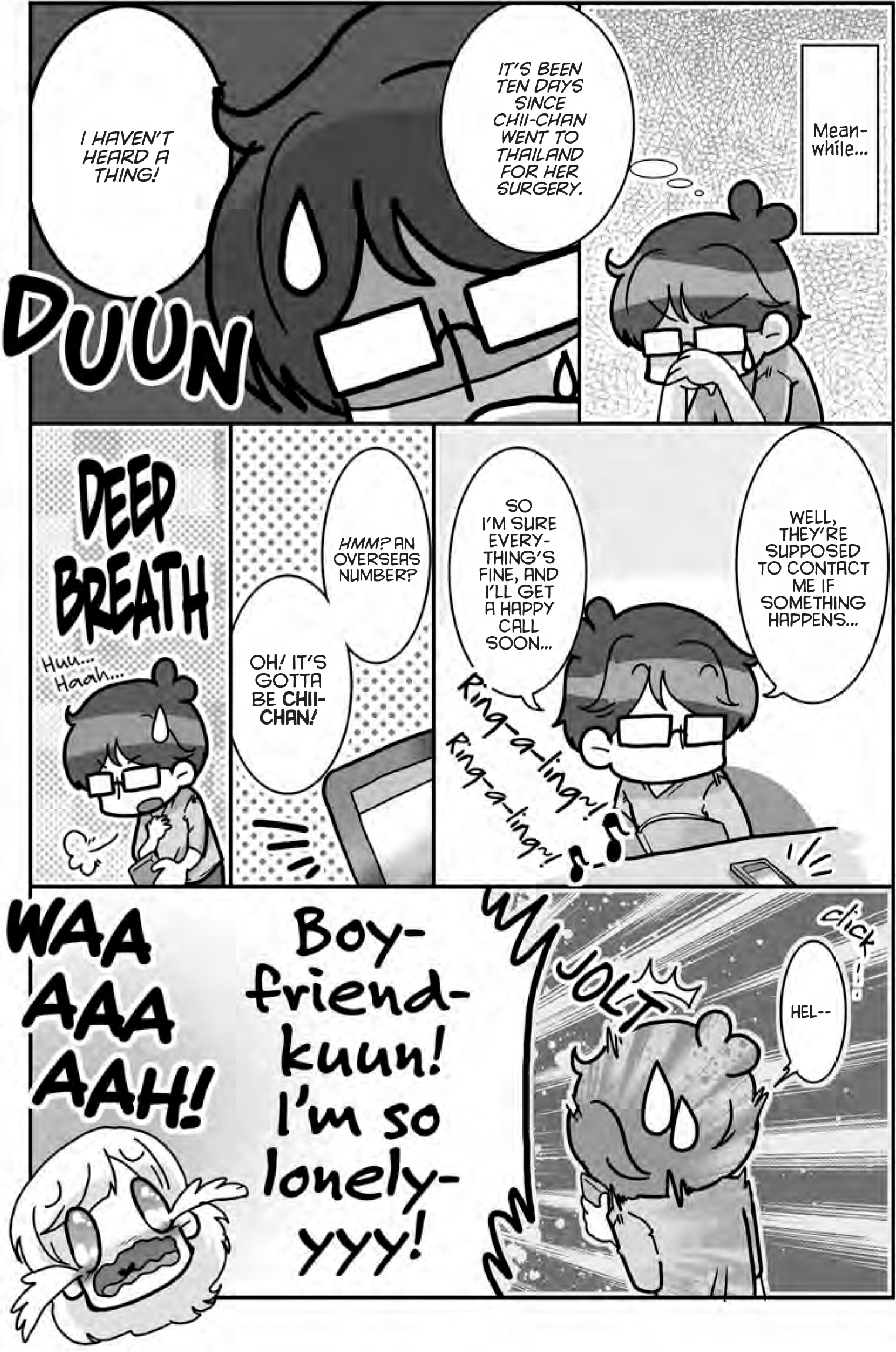 However, Chii's story is one that I'm sure many will welcome as a change of pace to the tragedies showcased in both fiction and nonfiction. Here is a tale of hope, one that presents the wonders of finding one's self, love, marriage, and the desire of feeling accepted by those around you. Often, it gives readers both cisgendered and transgendered a stronger understanding of these struggles, letting everyone know that this is a normal occurrence for them. As such, it carefully presents why these situations must be treated with the most sincerest of love and support by friends, family, and significant others.

The Bride Was A Boy does gloss over some of the bigger hardships that someone in the transgendered community may face, which may cause some to raise an eyebrow or two. With that being said, Chii's story serves as one of the finest examples of a tale that teaches about acceptance, love, and overcoming the greatest of obstacles that life throws at you. Thanks to its lighthearted tone and some much-needed educational aspects mixed in, The Bride Was A Boy delivers a tale filled with much beauty and inspiration for anyone who reads it. It may seem like an all-too perfect scenario presented in Chii's tale, but in the end, its tone is that of what any transitioning person seeks to achieve, and that is one of unequivocal happiness.

Background Noise: Be More Kind by Frank Turner - Turner’s latest album is a strong followup to 2015’s Positive Songs For Negative People, one that presents uplifting melodies to a world in turmoil. From its assuring opening "Don’t Worry" and the anti-racist anthem "Make America Great Again" to its serenading title track and swooning love song "There She Is," the England-based folk punk hero delivers his sound in the most inspirational ways. Be More Kind is a record that can act as the most musical of emotional supports for anyone struggling through the most harshest situations, lighting the way through the dark towards a better tomorrow.