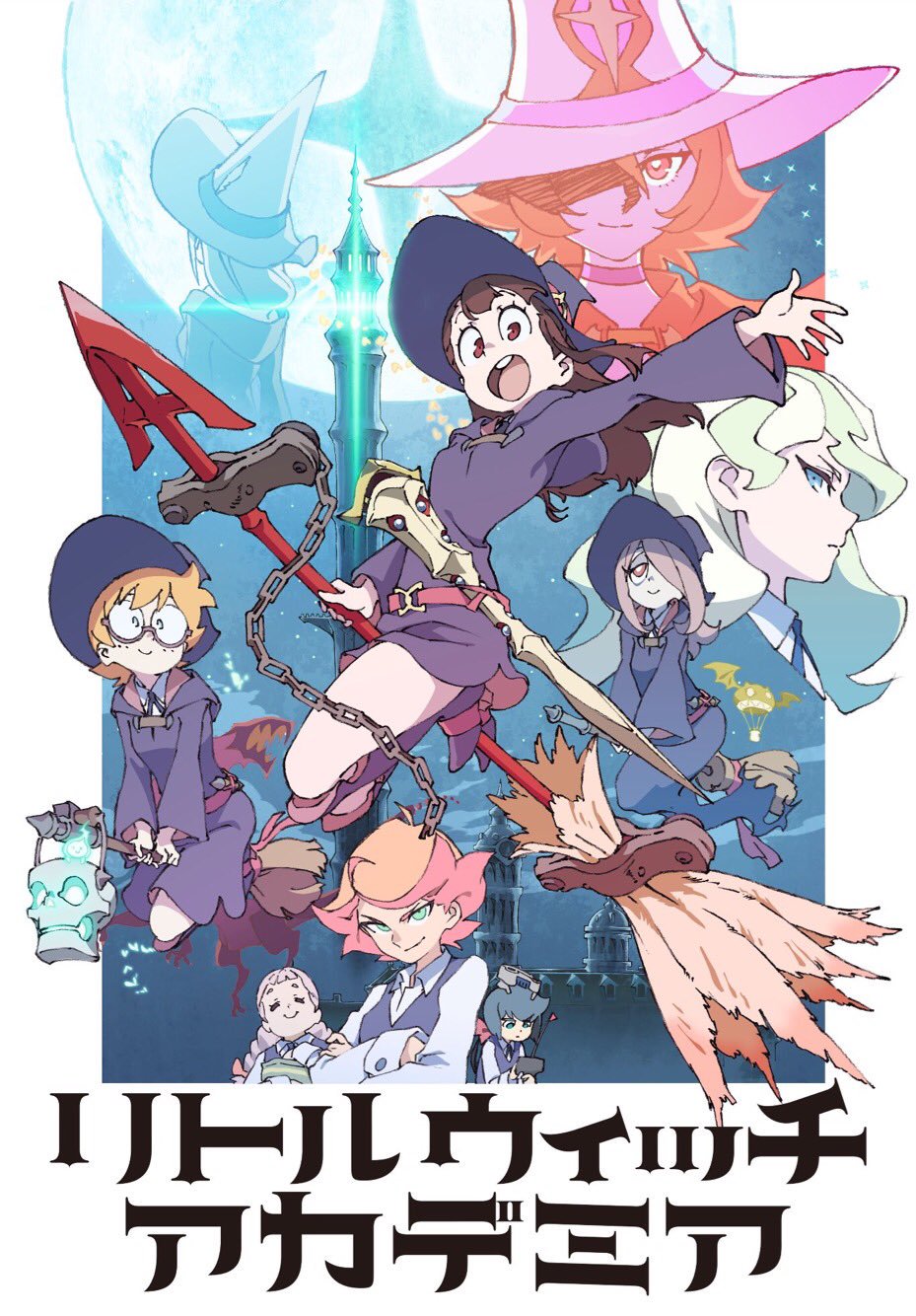 It's been twenty years since J.K. Rowling first introduced us to Harry Potter and the magically dangerous adventures that are thrusted upon him. Since that time many other writers and storytellers have tried (and failed) to capture that same magic that Rowling delivered to the world of spells and sorcery. Back in 2013, that level of whimsy was resurrected by Japan's Studio TRIGGER (Kill la Kill, Kiznaiver) with the short film Little Witch Academia. Enchanted by the concept the viewers wanted more, leading to TRIGGER to successfully fund a Kickstarter to make an hour-long sequel entitled The Enchanted Parade. Again the fans ate it up, and realizing what sort of potential this story had, TRIGGER decided it was time to give this story about students at Luna Nova Magical Academy a full-fledged series.

After years of waiting, and months after it premiered in Japan, Netflix has unleashed the first half of the series to the rest of the world. Saying that it was worth the wait should be no surprise, given TRIGGER's impressive resume, but no one could've predicted the sheer majesty that Little Witch Academia would bring not just to the world of anime, but also the realm of fiction as a whole. 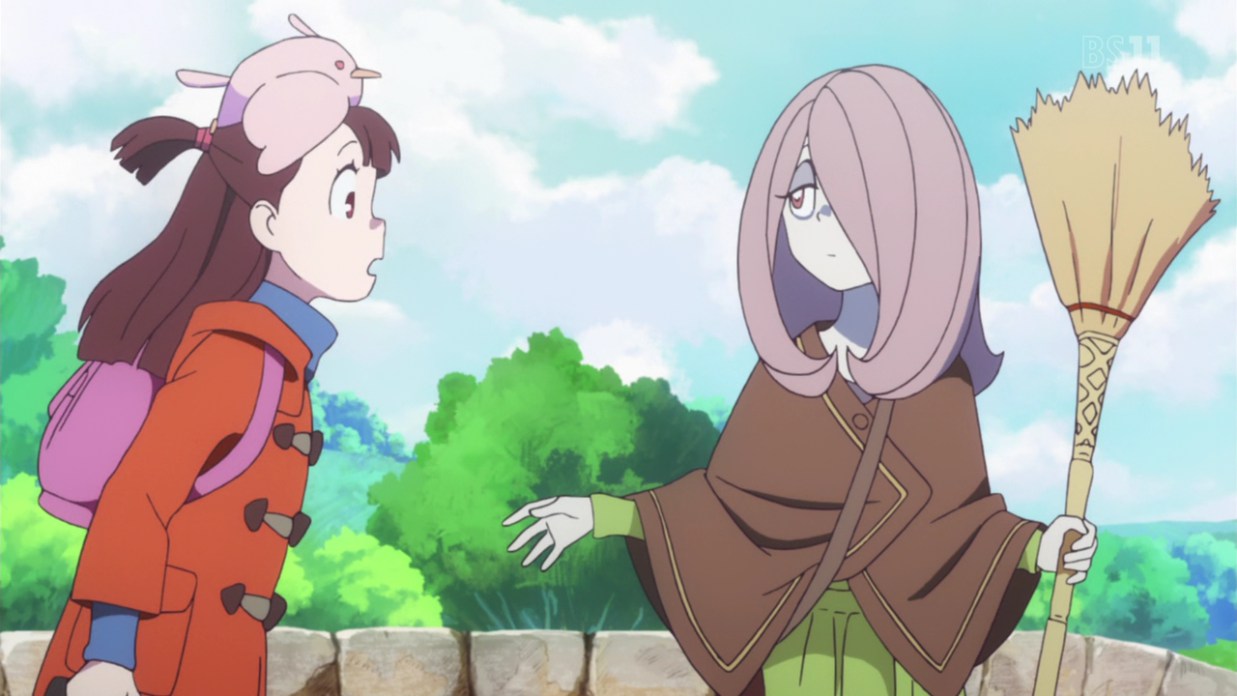 The story puts its focus on a young girl named Atsuko Kagari (or Akko, as her friends call her), who was inspired by witch named Shiny Chariot to dive deep into the realm of magic. As a normal human the path to witchcraft is a lot harder for her, to the point where even getting to Luna Nova is a large hassle. She can't properly ride a broom, casting spells results in things going explosively bad, and even understanding some of the more stranger-tongued teachers results in her studies suffering as well. Nevertheless Akko keeps on going with a can-do attitude, as well as the aide of her newfound friends: the kindhearted bookworm Lotte Jansson and the mushroom enthusiast Sucy Manbavaran.

To truly understand the situation of Akko's, imagine a muggle being accepted into Hogwarts School of Witchcraft and Wizardy. Compared with the likes of Potter, Ron Weasely, and Hermoine Granger, they would have a serious hard time keeping up with the ones with true magical powers. However because of their placing, this setting that they've been given the opportunity to experience, I would highly doubt that the muggle in question would ever give up hope. If anything Akko shows the viewers exactly how to overcome such a situation: by working hard and never giving up, even when the cards are not in their favor. 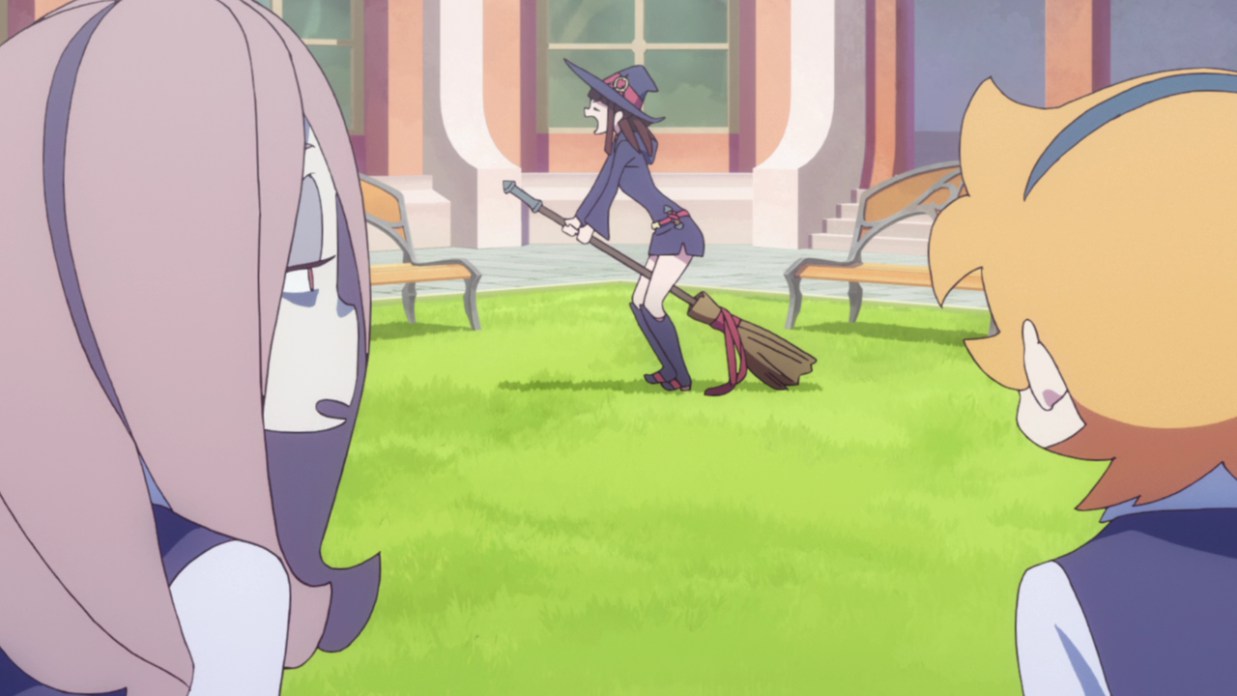 Of course it helps to have a teacher in your corner, which comes in the form of astrology expert Ursula Callistis. Because of her real identity, she takes Akko's passion to heart, doing everything she can to assist the young witch-in-training. Sometimes it causes more trouble than it should, but for the most part -- and with the aid of a little Deus Ex Machina -- things usually turn out better for the sake of both Akko and for Luna Nova in its entirety. It also helps that Akko has somehow gotten Shiny Chariot's powerful staff in her possession, which accepts the spunky girl as its new wielder.

Most of Little Witch Academia's storytelling is episodic, with stories involving broom racing, dragons stealing the Sorcerer's Stone that powers the school's magic, and attempting to pass one single exam in an ocean of bad grading. Underlying these episodes is the growth that Akko showcases throughout her time studying and putting her hard work into action. Yes, she may come up short here and there, but the importance of her mistakes (pointed out in Episode 11) is that she learns from them and pushes her to be not just a better witch, but also a better individual in general. 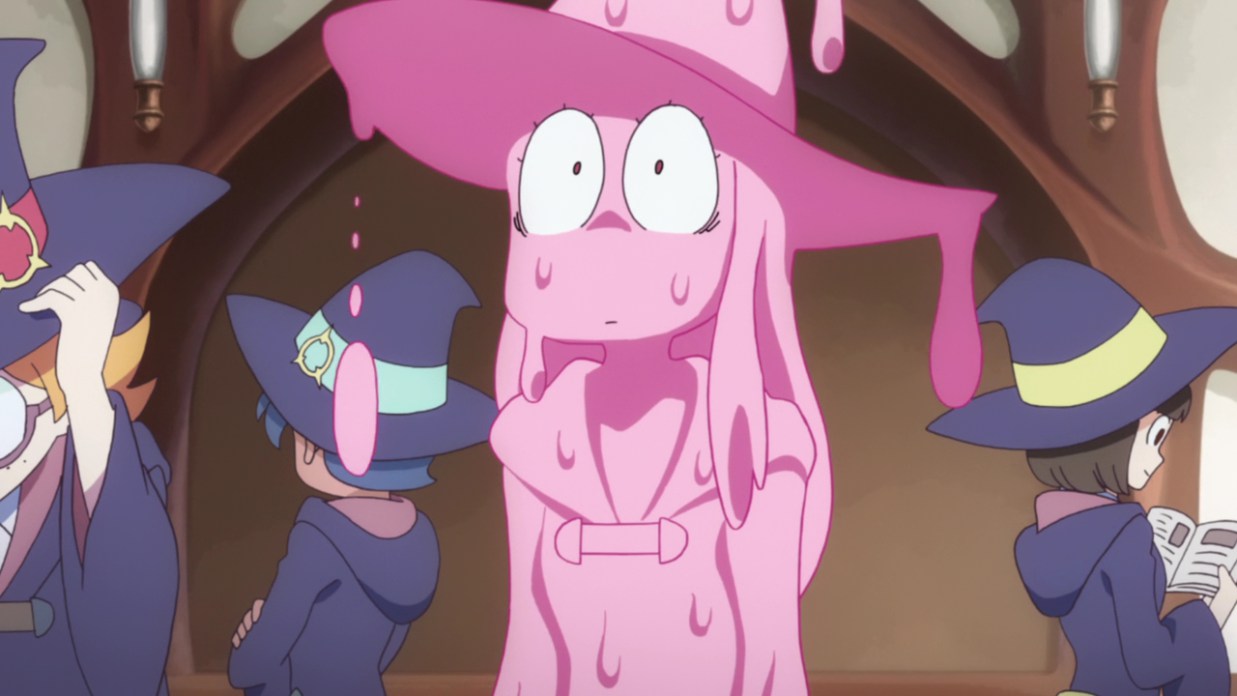 Thankfully the show has a massive funny bone to boot, with Akko's failures being more laughable than sad. A great moment involves her, Lotte, and Sucy saving their philosopher teacher (and fish) Pisces, resulting in a great Merman transformation and a goofy run-in with a fish poacher. Romance is also played up for laughs when a LoveLove Bee is let loose at a snobby party, resulting in everyone hooking up with some questionably funny couplings. Even a trippy episode involving Akko diving into Sucy's subconscious brings about some visually hilarious gags.

It's hard to go into a lot of detail regarding Little Witch Academia without spoiling some of the series' best moments. However what makes this series such a gem to watch is its moralistic take on having a can-do attitude. The tale of a weak person achieving greatness is nothing new in the realm of fiction and fairy tales, but it's how Studio TRIGGER presents it here that makes it feel refreshing, fun, and -- above all -- inspiring. What Akko and her friends showcase is the power of positivity and the will to succeed in a way that people of all-ages can fully enjoy and comprehend, which is something that I think we need a contrast reminder of during this era. (Netflix has rated the show TV-Y7, with only a couple "damns", "hells," and "craps" here and there, so it's appropriate for kids for the most part.) 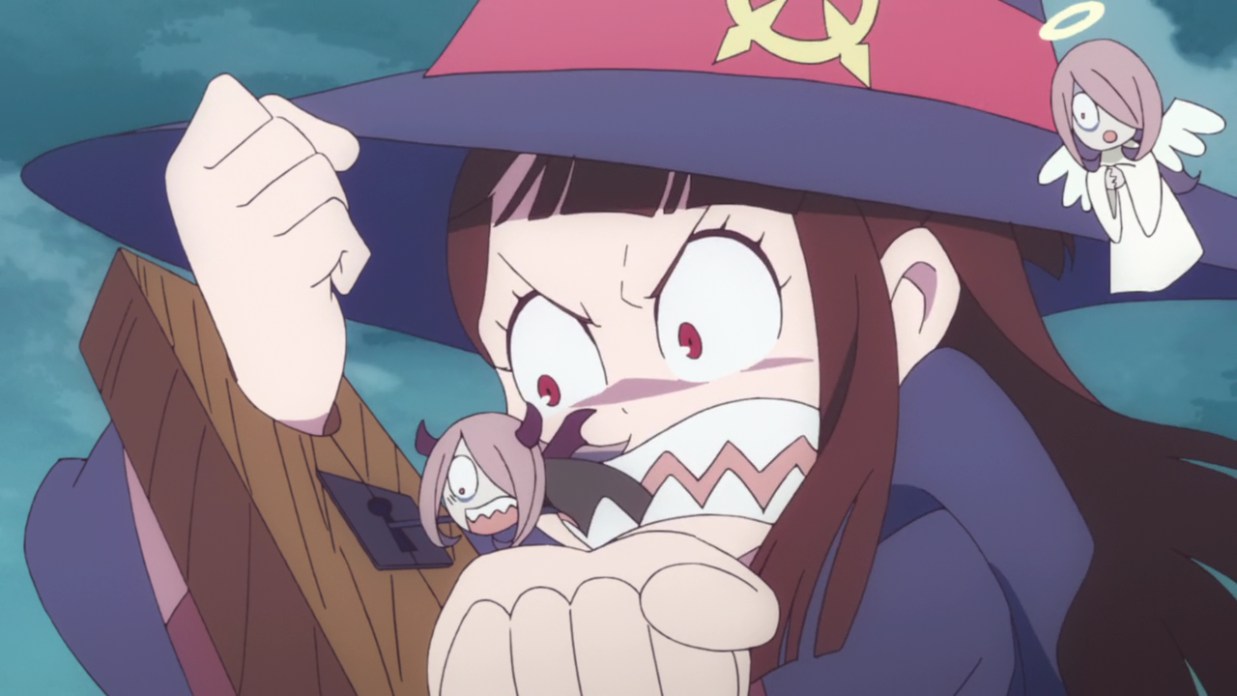 The animation quality of Little Witch Academia also helps to keep things interesting, with practically every scene popping with wow factors beyond imagination. This is Studio TRIGGER when they're given the opportunity to go all in for its visuals, be it during a fast-paced broom race or a battle with the sorrowful spirit Vajarois. However it's when things slow down when viewers can truly appreciate the wonder that TRIGGER has brought to the table, such as the scene involving the hatching of the butterfly-like Pappiliodya. There's a sort of beauty that TRIGGER has achieved here that they never have in the past.

Alongside its original Japanese, Netflix has dubbed the show in four other languages: English, Spanish, French, and German. For the sake of viewers of all ages here in the U.S., I took a listen to the English dub version, which brings back most of the cast of the first two Little Witch Academia films. Erica Mendez captures the heart and spirit of Akko with a positive attitude, even when she has a moment of doubt. Stephanie Sheh's Lotte brings a timidness to the bookworm, but showcases a fiery passion for the things she cares deeply about. (An episode involving her favorite book series shows this at its absolute best.) Rachelle Heger's Sucy often comes across like a tongue-clicking goth, with her more mischievous side bringing forth a wickedly lively performance. 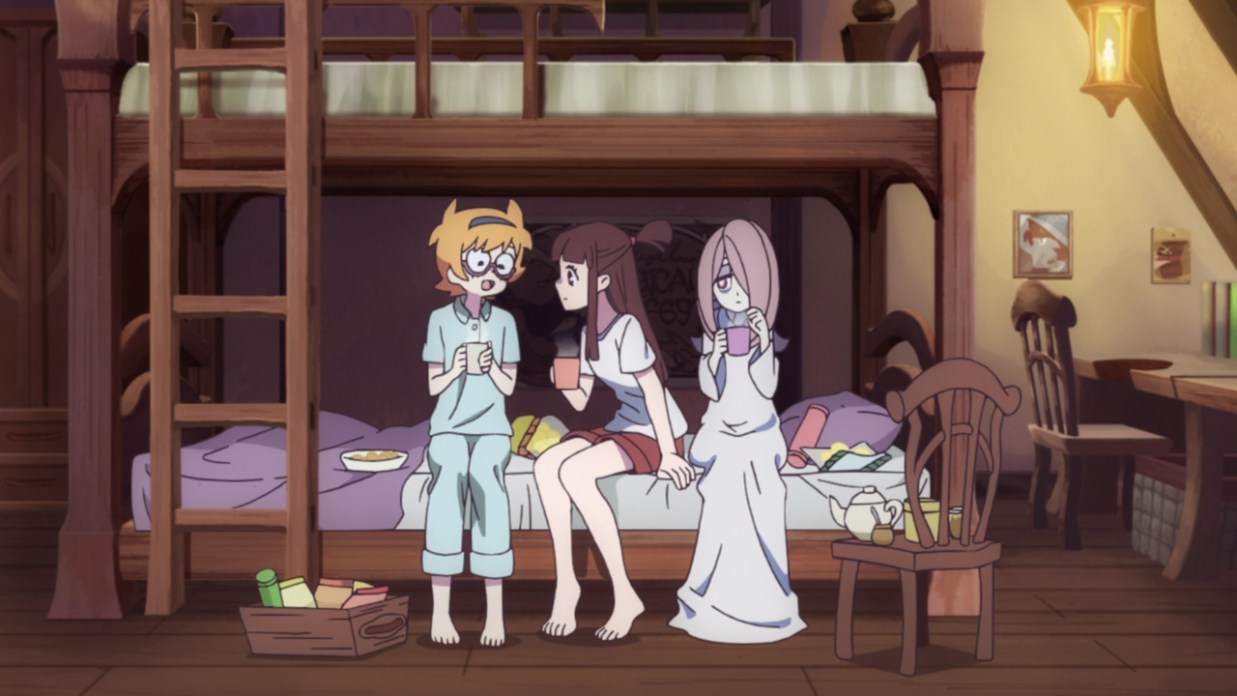 No series about a young girl rising above the rest needs a couple of great friendly rivals, which come in the form of some fun and formidable classmates. Laura Post takes the character of Diana Cavendish to a level that reaches high levels of pride without going snooty levels. Even when she has to bump heads with her fellow students, it's for the sake of the school and not her. Marianna Miller's Amanda O'Neill is the right level of delinquent with a sprinkling of a good heart, even if she and Akko may bicker at one another at times. Of course we need a strong guide to overlook Akko's progress, which Alexis Nichols presents with both motherly care and warm embrace in her role as Ursula.

Michiru Ōshima takes a cue from the likes of John Williams with her score, bringing forth a lively pomp and circumstance in the most exciting of scenes. It's on the level of a high-profiled blockbuster franchise, with the grandeur of its orchestra emphasizing the wonders of Nova Luna via an extra dose of wow factors. Opening theme "Shiny Ray" by YURiKA drags the viewers in to the world of magic that TRIGGER promises and delivers, with its poppy melody and majestic attitude. Yukio Ōhara's end theme "Hoshi o Tadoreba" emphasizes the importance to dream, with the attitude of Akko being ever-present in the song's lyrics and melody. 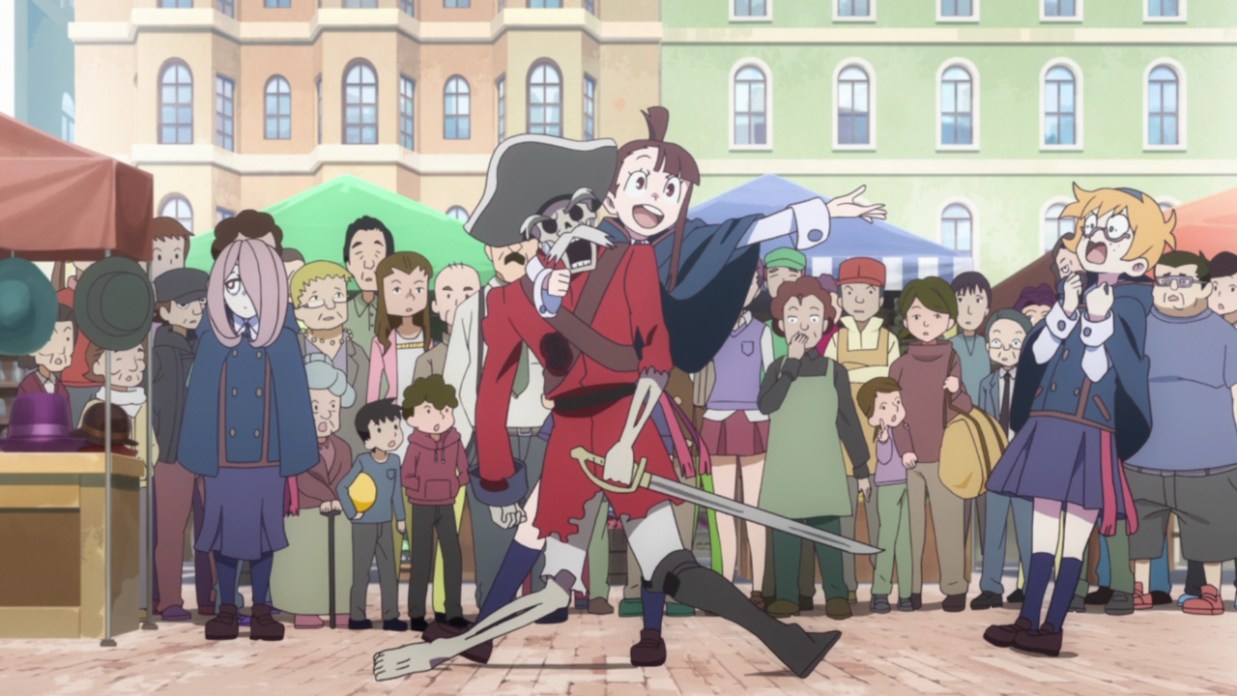 Little Witch Academia is the successor to Harry Potter we've been waiting for. Magic, laughter, epic battles, and the lessons on how to be both a strong & better individual is served up wonderfully in each episode, with the aid of Studio TRIGGER's trademark & expressive animation and a great voice cast. The story of Akko and her friends will no doubt touch the hearts and souls of any viewer who takes the time to give this series a well-deserving chance. In short, missing out on Little Witch Academia is as life-scarring as viewing a magic trick with all its illusions ruined right in front of you.

Now please Netflix, don't make us wait too long for the show's second half!

Little Witch Academia can be viewed on Netflix. Episodes 1-13 were observed for this review.

Background Noise: Theatre is Evil by Amanda Palmer & The Grand Theft Orchestra - When it comes to strong-willed female performers, Amanda Palmer takes the cake from the rest of the pack. Her 2012 record casts a spell as powerful as one from Luna Nova can fathom up, with "Smile (Pictures or It Didn't Happen)" and "Massachusetts Avenue" pushing through majestic sounds that only the occasional Dresden Doll could. It sings, screams, and shouts with a fiery love, in the same way Akko lets her presence be known throughout the academy.