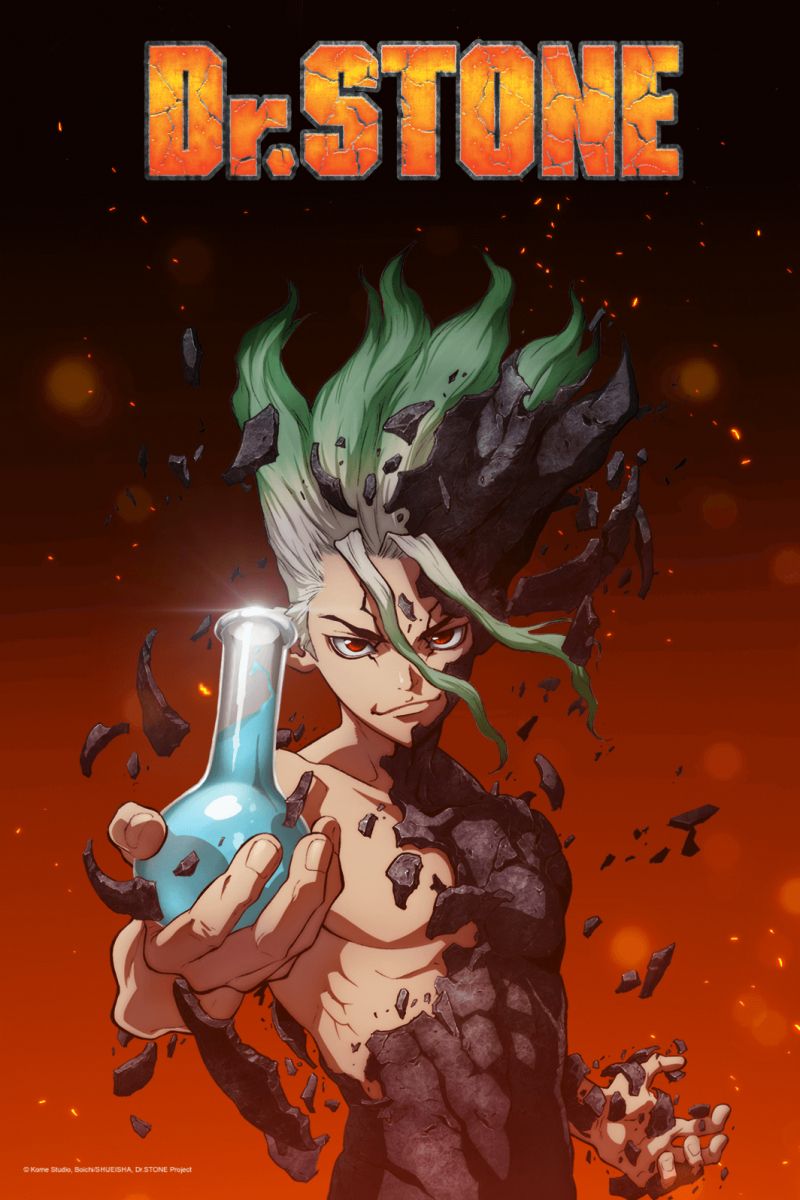 Those who have read my countless reviews of Riichiro Inagaki and BOICHI’s manga series Dr. STONE will know that I hold that series with the highest of regards. Every chapter and twist that is thrown my way has wowed and impressed me countlessly, to the point where I would argue it to being the best shonen manga series of the 2010s. So when word got out that TMS Entertainment (Lupin The Third, Gugure! Kokkuri-san) would be adapting it into an anime series, I knew I had to place it deep under a microscope to judge it fairly and reasonably. After countless weeks of observations and mental critiquing, I have finally reached my verdict...

The world is encased in stone after a strange phenomenon. Thousands of years later, friends Senku (Yūsuke Kobayashi) and Taiju (Makoto Furukawa) awaken from their rocky prisons, with a quest to bring back humanity. With Senku’s brains and Taiju’s brawn, the duo first set out to wake up the oaf’s love interest Yuzuriha (Kana Ichinose), but not before adding a bit more muscle via Tsukasa (Yuichi Nakamura). However, their plan has a setback, as Tsukasa aims to destroy some of the humans trapped in stone, as he sees many of the adults as hindrances rather than good. 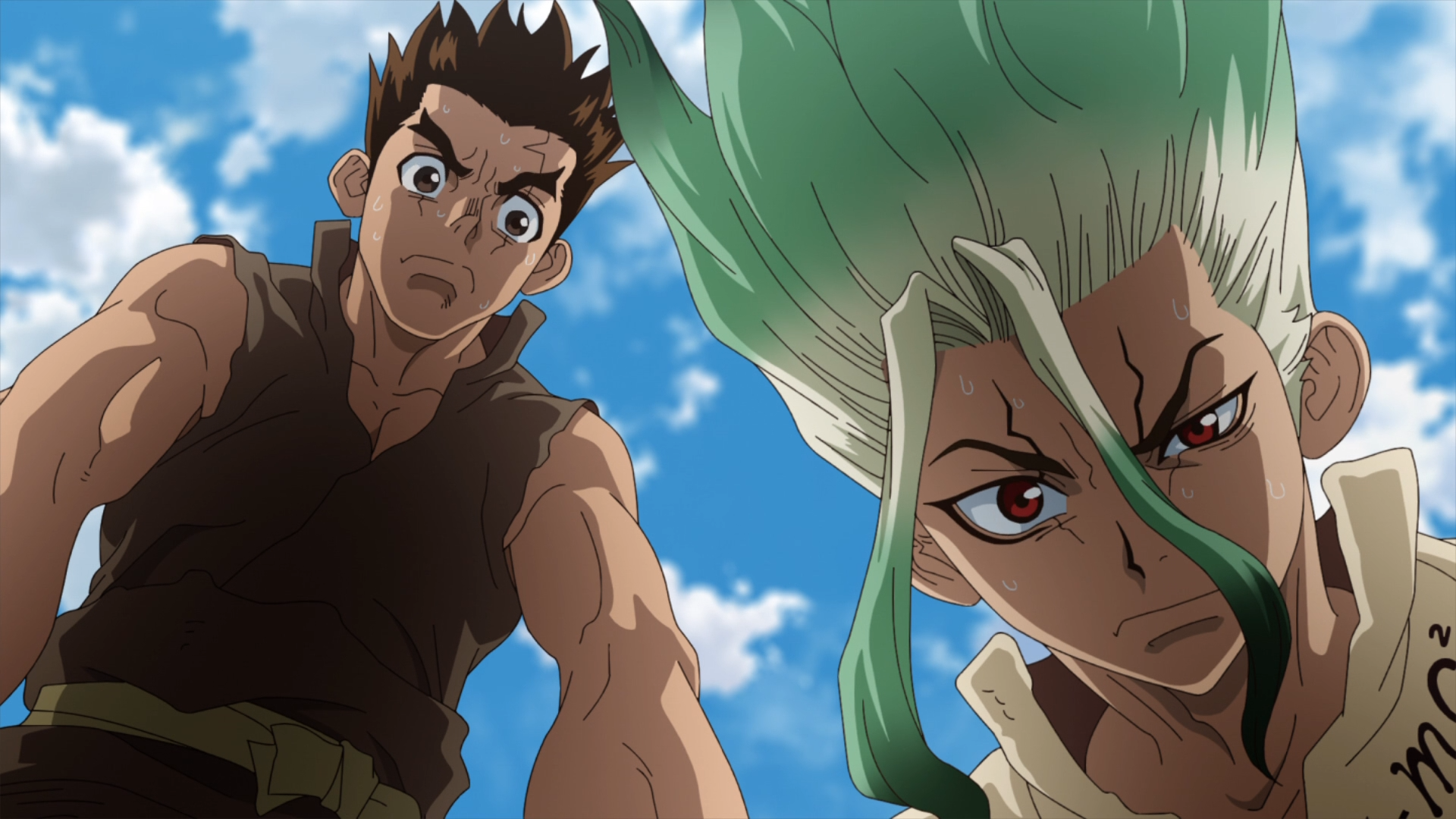 Thus, a new plan is made, with Taiju and Yuzuriha spying on Tsukasa as he grows his army, while Senku befriends a group of humans who’ve thrived since the stone world had taken to form. With the aid of the tomboyish Kohaku (Manami Numakura), the rock-loving Chrome (Gen Sato), and the adorably peppy Suika (Karin Takahashi), Senku forms what is the first part of the Kingdom of Science’s Power Team. As time goes on, support for Senku forms, and with Tsukasa preparing to take down the kid scientist, the fate of a new age rests upon what can be brought back by Ishigami Village.

What makes Dr. STONE work in the original manga is how it showcases the scientific elements of the story. Never does it slow down to explain the more long-winded stuff one would learn in biology or geology; rather, it throws these facts at you in the same way Goku tosses a Kamehameha at Frieza. The anime captures that excitement the same way, demonstrating the steps on how Senku makes medicine, brings back electricity, and concocts the very substance that’ll free others from their stone prison. To put it another way, it’s like taking a show like Bill Nye the Science Guy or Beakman’s World and injecting it with testosterone! 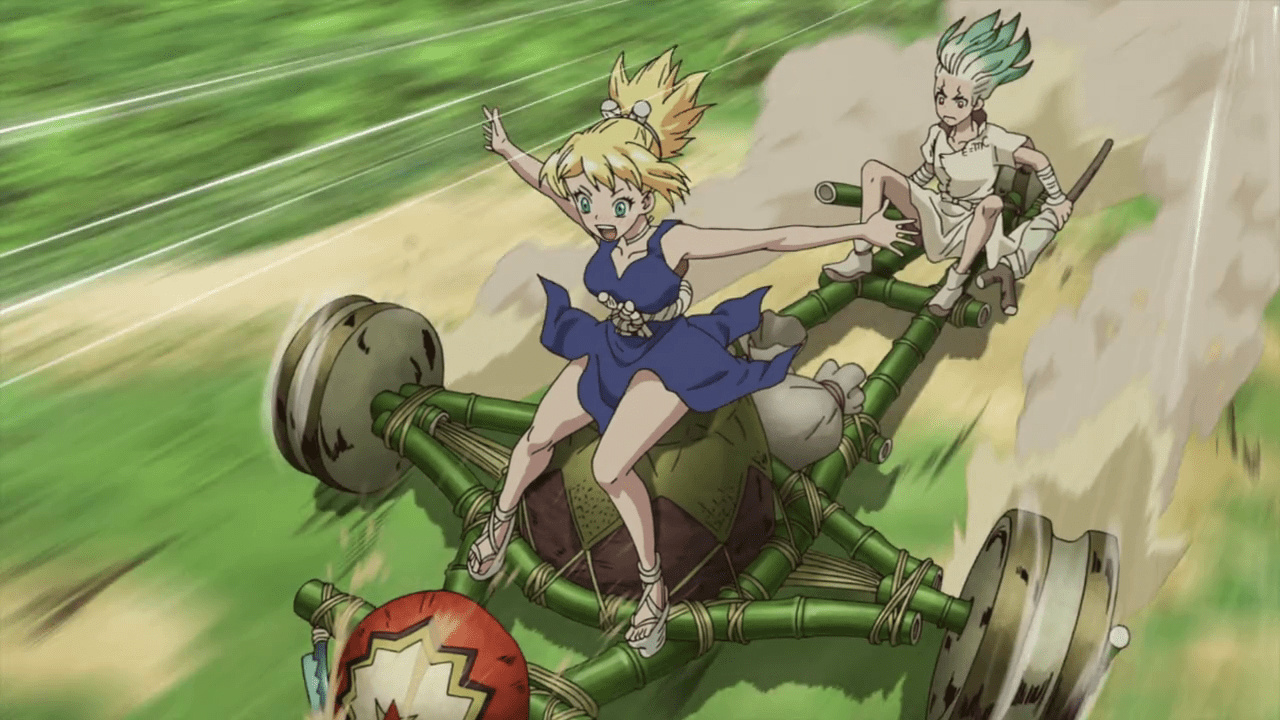 One thing it never forgets to do is take the focus off the main goal of Senku: to revitalize the world. At first, there’s a lot of hesitation from the villagers, until our mad scientist hero finds ways to coerce them into realizing the good and potential of his plan. Crafting something like ramen, fixing Suika’s “blurry eye disease”, and convincing the village artisan Kaseki (Mugihito) to help create beakers and other science tools has aided Senku on his quest to gain the trust of everyone. Even putting his own body on the line in a tournament for the title of village chief, he is given acknowledgment by Kohaku’s high priestess sister Ruri (Reina Ueda) for the work he’s done, especially when he aims to cure her of her mysterious illness.

There’s a big theme of hope that’s prevalent throughout Dr. STONE, as the entire fate of the world rests on Senku’s shoulders. It becomes apparent that he can’t solve everything all on his own, which is why people like Chrome, Suika, Kohaku, and the guard brothers Kinro (Tomoaki Maemo) and Ginro (Ayumu Murase) have come with their own sources of outside-the-box solutions. Even with an antagonist like Tsukasa waiting in the wings to strike at any moment, the Kingdom of Science puts much faith on the past accomplishments of humankind to push them towards a better future. For that, this anime serves as a truly inspiring piece of fiction. 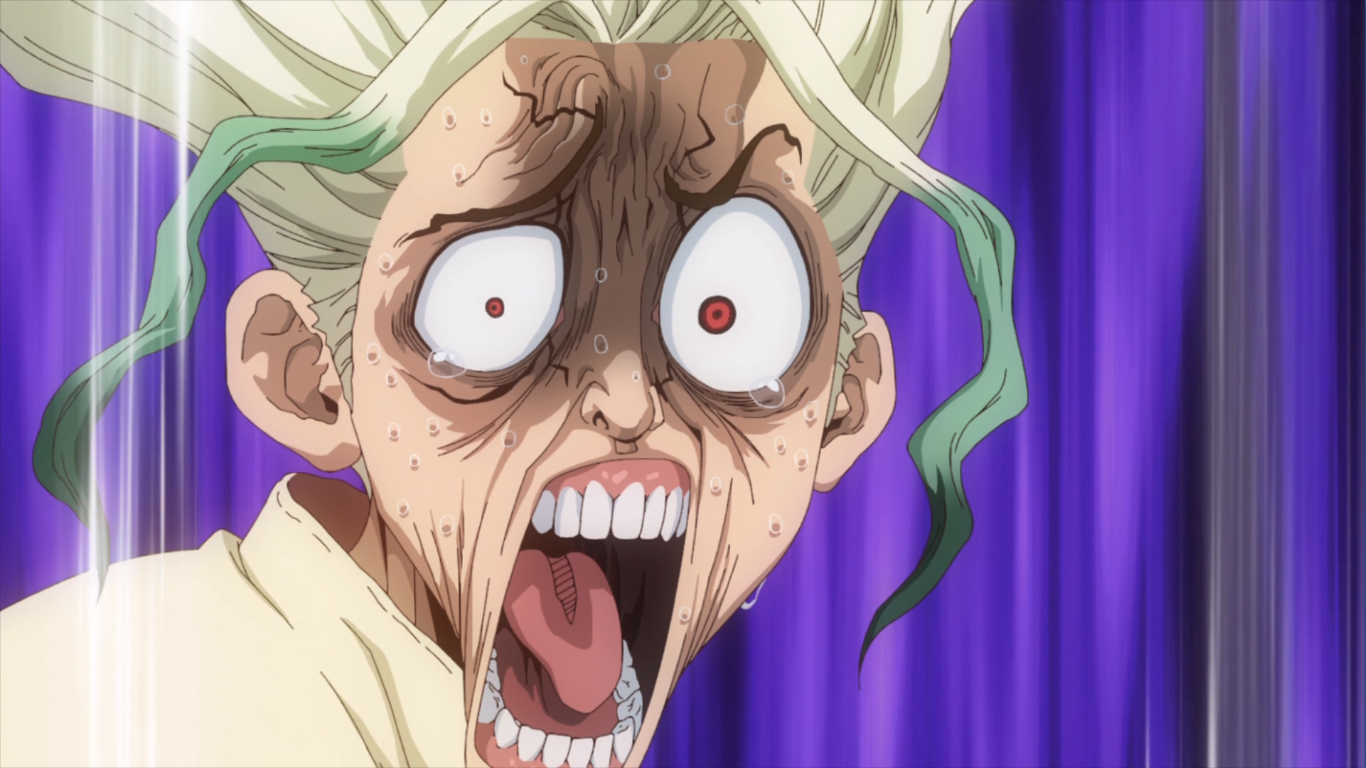 Of course, it also helps that the series can be funny as hell when it wants to be! The amount of fart, piss, and dick jokes tossed at its viewers in-between the more science-y stuff isn’t at all amateurish; rather, it demonstrates some of the do’s and don’ts of the science world. Case in point: during the tournament, Ginro learns the pros and cons of using caffeine as a means of getting energy. While he walks away with a win, he also gets a bad case of the runs, resulting in a victory lap with his pants down to his ankles and the loudest poots heard throughout the village. Yes, learning about how caffeine makes you poop can be pretty silly, but consider it a nice breather from the more serious educational stuff this show jams into your brain.

With TMS Entertainment and its 8PAN subsidiary animating Dr. STONE, the production team does an upstanding job with bringing BOICHI’s visuals to life. During the more serious and intense moments, the world brims with beautiful forests and detailed villages, with the characters bringing forth serious moments in the most gorgeous of ways. However, it’s when the more comedic parts occur where the animation truly shines, with the grotesque faces of Senku, Chrome, and Suika protruding expressions that reach Uncanny Valley levels of disturbing silliness. 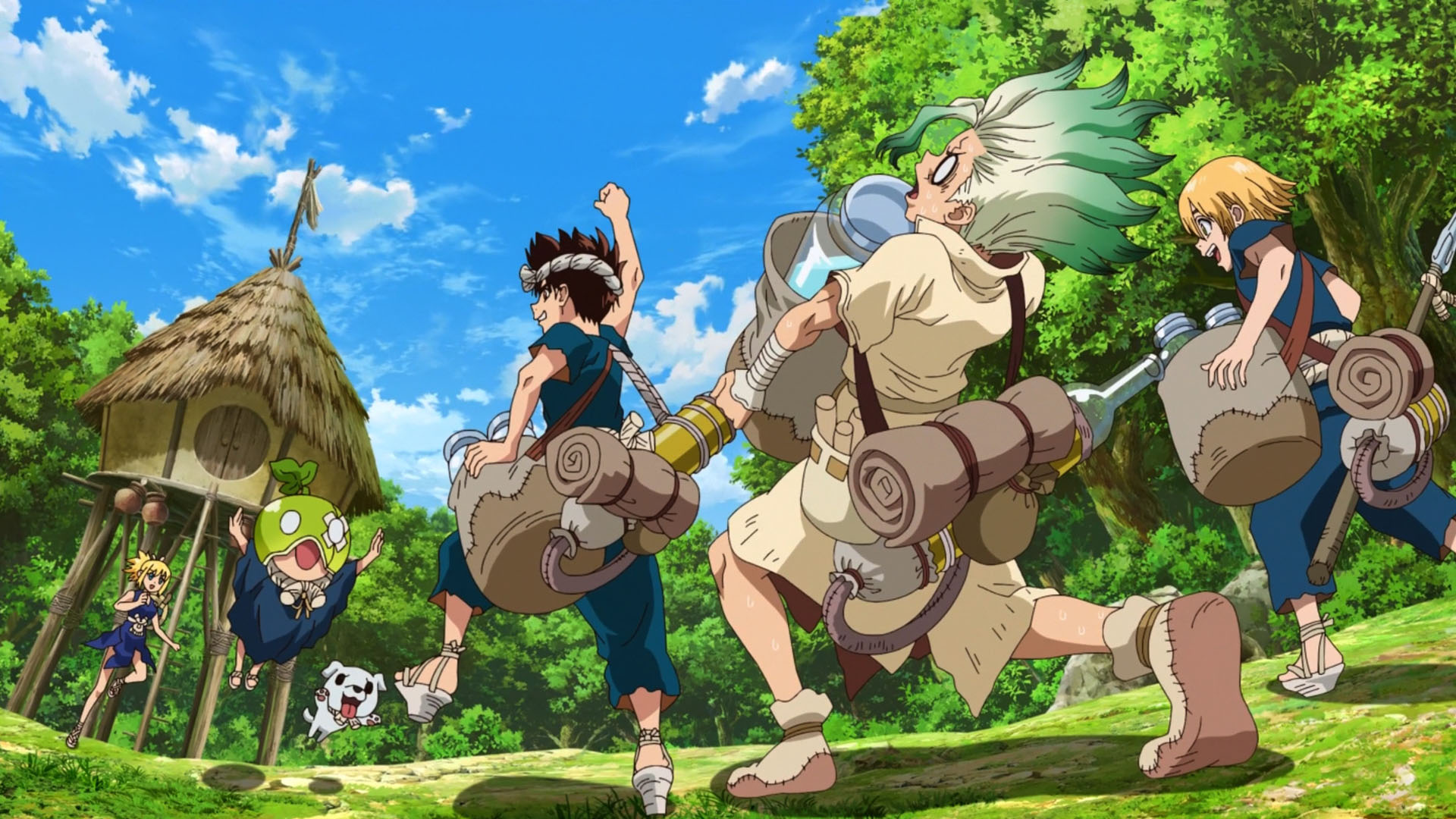 Not a single character in this adaptation has been miscast, with Kobayashi’s Senku demonstrating the intense science he articulates with intense glee and focus. Numakura brings a lot of love and power as Kohaku, teetering between being an endearing sister and a strong-headed warrior with great comedic timing. Sato’s Chrome has the same level of passion in his voice for scientific discovery, giving way to him being the perfect partner for Senku during their quest for a better tomorrow. Despite him being temporarily away, Furukawa’s loud performance as Taiju is both earnest and boastful throughout his time on-screen.

A trio of composers have come together to score Dr. STONE, with Hiroaki Tsutsumi (Karakai Jozu no Takagi-san), Tatsuya Katō (Food Wars!), and Yuki Kanesaka delivering melodies boasting with both epicness and zaniness when the time calls for it. (Plus, I’m pretty sure one of these three is a Dropkick Murphys fan, as evident by a familiar bagpipe song that’s featured throughout.) BURNOUT SYNDROMES’s “Good Morning World!” is a powerful opening theme song during the series’ first half, with PELICAN CLUB’s “Sangenshoku” being a slightly more upbeat replacement for its second cour. Rapper Rude-α showcases his skills behind the mic with glee in the first closer “Life,” whereas Yusuke Saeki takes a more sweeter approach with the second closer “Yume no Youna.”

TMS Entertainment should hold its head high for the way they brought Dr. STONE to life. The jokes hit hard, the science gets your blood pumping, and the characters are some of the most endearing you’ll come across in any shonen series this year. Rarely have I seen such a faithful and well-taken care of adaptation of a manga series quite like this. Dr. STONE shapes itself to being one of the very best anime of 2019, and with the decade coming to a close, it’s easily a major highlight for what the anime industry has accomplished over the last ten years. To paraphrase Senku, Dr. STONE is exhilarating!

Dr. STONE can be viewed on Crunchyroll, VRV, FunimationNow, Amazon Prime, and Toonami. It has been licensed by Crunchyroll & Funimation. Episodes 1-17 of the Japanese-language sub version were observed for this review. Promotional consideration provided by Ellation.