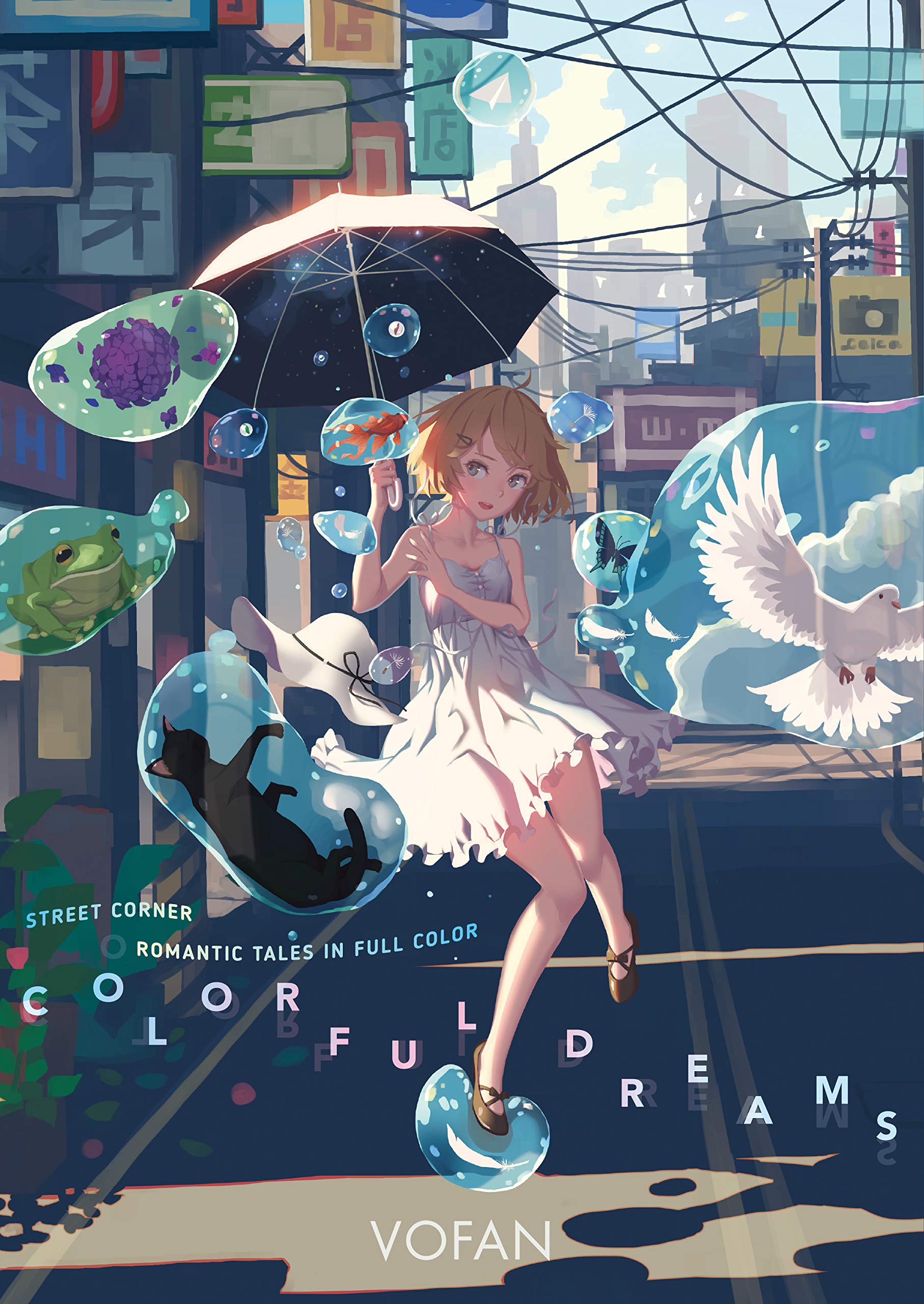 To fans of the Monogatari light novel series, VOFAN is the mastermind behind its dream-like visuals that fills the pages and covers of NISIOISIN’s beloved franchises. The Taiwan-based artist crafts a look & style that belong both in the realms of reality and fantasy. And it’s probably because of his works in the Taiwanese magazines Famitsu Weekly Taiwan and Tiaozhan-zhe (Challenger Magazine) that he began getting noticed by the Asian public. His 2006 miniseries Colorful Dreams, which is being published for the first time America, is where his notoriety started to truly rise.

Inspired by his childhood in Taiwan, Colorful Dreams takes the form of fourteen brief stories. Each one takes place in a specific locale in VOFAN’s homeland, crafting real-life experiences together with the surreal. These tales don’t have beginnings nor ends; they’re just minor glimpses into the mentalities of certain citizens walking down alleys, riding transportation, or getting caught in the rain. But even within these tiny five-paged narratives, there’s a lot to ponder.

In “A Cafe”, two frightful monsters enter a coffee shop. The quiet environment is suddenly thrown into chaos...or so you’d think, until the narrator reveals that these yokai are simply customers of her shop. “Xmas Eve” has a cute Santa girl being one-upped with someone looking more like the real thing, with her then wishing she had some chimneys she could dive down. “Echo On The Bus” dives into the origins of ghost stories, as a young girl tries to prank a couple of fellow passengers. However, the tables are turned when she hears a voice as she exits the now-empty bus.

A lot of Colorful Dreams has this childlike mindset, the kind that makes you think of the impossible as if it’s the most genuine thing around. In a way, it somewhat adds a more optimistic layer to one’s darkened reality, like a beam of sunlight breaking through a dark cloud. “Memory of a Square” is a fine example of this, where a daughter reminisces about watching movies projected in her town square. Now no longer filled with excited viewers, the girl now watches another classic film with her elder father, as the surrounding area has been subjected to land rot and decay. And yet, that youthful excitement still resides within the girl as she views a film with her parent, just as she did when she was a child.

It’s these moments where VOFAN delivers something special to his readers. What could’ve easily been just a bunch of random drawings has instead transformed into deep recollection’s of the artist’s life. Even while he’s not the protagonist in any of these stories, his viewpoints and mentality are ever-so present in these tales. The afterwords that follow each of these stories confirms this aspect, with VOFAN diving deep into his memory bank and pulling out something that ties his life to these fantastical stories.

Of course, you can’t talk about this book without mentioning the art style. Although VOFAN’s art has evolved a lot since 2006, it doesn’t take away from the fact that these pictures are the things of magic. One can definitely see the way manga has influenced his character design, but the watercolor-like touches to these digital drawings adds a whole different level of depth into the final product. Here, VOFAN takes his greatest influences, slaps it onto his canvas, and sprays a rainbow of extra color and energy into each frame.

Colorful Dreams is a great way to see how VOFAN truly brought his talents to the world. Those who are familiar with his works in Monogatari may be taken aback by how much this work differs from the stuff he’s now known for, but they’ll easily be drawn into the brief worlds he has created in these fourteen tales. With its beautiful art, deep-minded storytelling, and revealing interviews, Colorful Dreams delivers a bright imaginative look into VOFAN’s childhood stomping grounds.