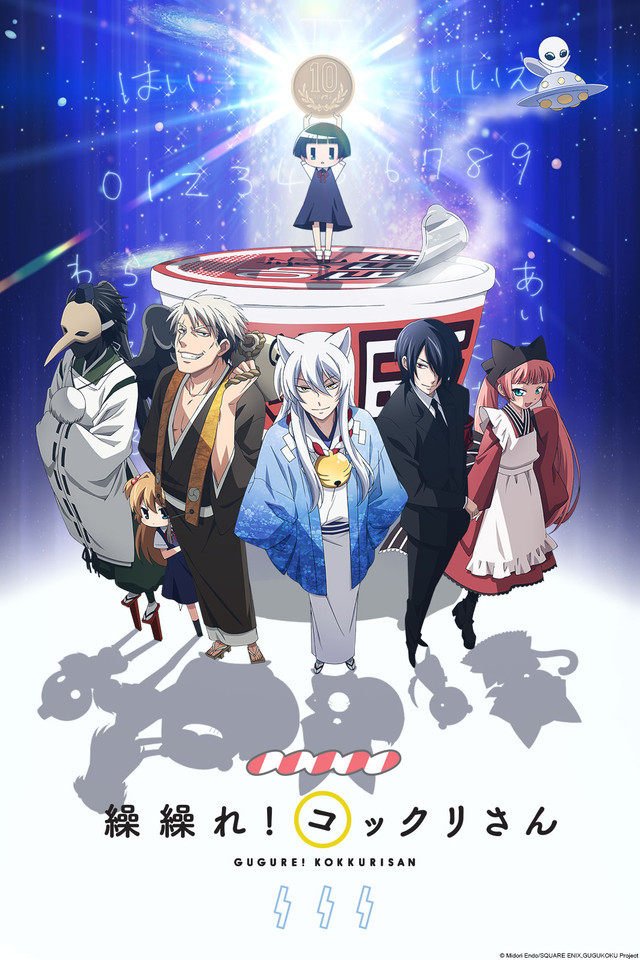 In Japan there exists a game similar to Ouija. Called Kokkuri-san, the concept of the game is similar to its Western cousin: people put their fingers on a coin, summon a fox spirit, and have it communicate with everyone via the board. However there is a belief where if you play Kokkuri-san alone, you'll be cursed with a hideous fate. So what happens when a young girl summons the spirit by her lonesome? Why sheer hilarity, of course, in the form of this fall's anime comedy Gugure! Kokkuri-san.

Kohina Ichimatsu is an elementary school student lacking friends and proper at-home guardianship. One day she plays the cursed game alone, summoning Kokkuri-san and becoming a victim of his curse. Just one problem: Kohina identifies herself as an emotionless doll, so when Kokkuri-san says he will haunt her, she doesn't really care at all. This bothers the fox spirit to the point where, instead of being a burden on the child, decides to help her and regain her humanistic mentality. 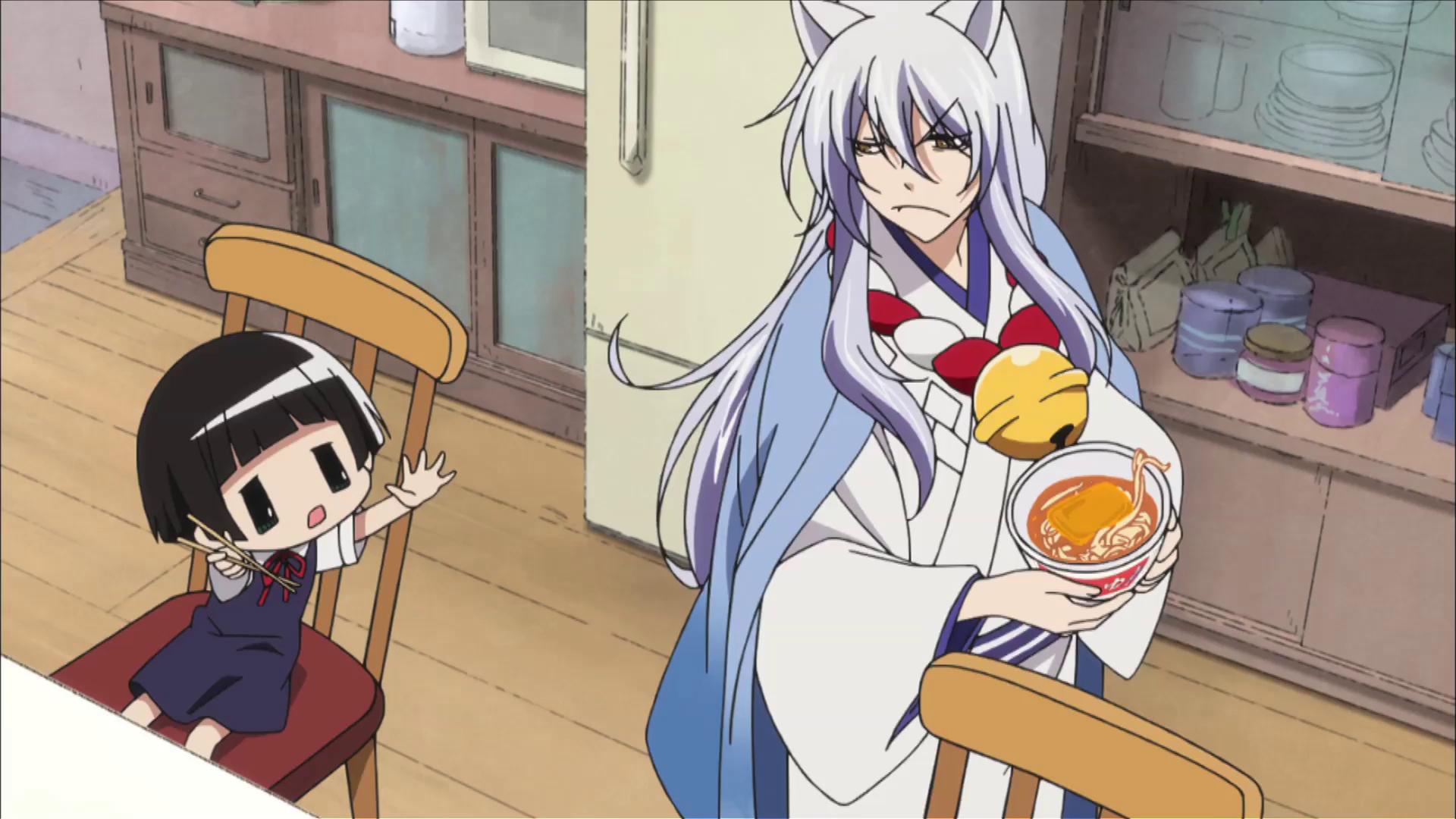 Throughout the show Kokkuri-san lends a hand to Kohina, despite the fact that she wants no kind of assistance whatsoever. From cooking better meals and keeping her away from those cheap cup noodles that taste good, teaching her how to smile, and to get along better with her classmates, every act of kindness the spirit attempts to bring to the young girl either winds up working out for the best, or failing miserably like Kohina said it would. Of course, it also doesn't help that two other spirits decide to hone in on the girl in a mischievous manner: the dog-spirit Inugami and the tanuki Shigaraki.

Gugure! Kokkuri-san does a fantastic job when it comes to its comedic delivery. A mixture of clever punchlines and good old-fashion slapstick the show does wonders to the funny bone of anyone watching it. Case in point: in one episode Kokkuri-san worries that Kohina isn't making any friends, with the girl responding that she gets along with one classmate. When it's revealed that the fellow student is not of this world, the rational thinking of Kokkuri-san and the foggy mentality of Kohina clash in a realm filled with nods to E.T., Alien, and other pop culture homages. Another segment involving Shigaraki's secret kindness ends on a note that makes you wanna strangle the gambling drunk tanuki instead of pat him on the back. 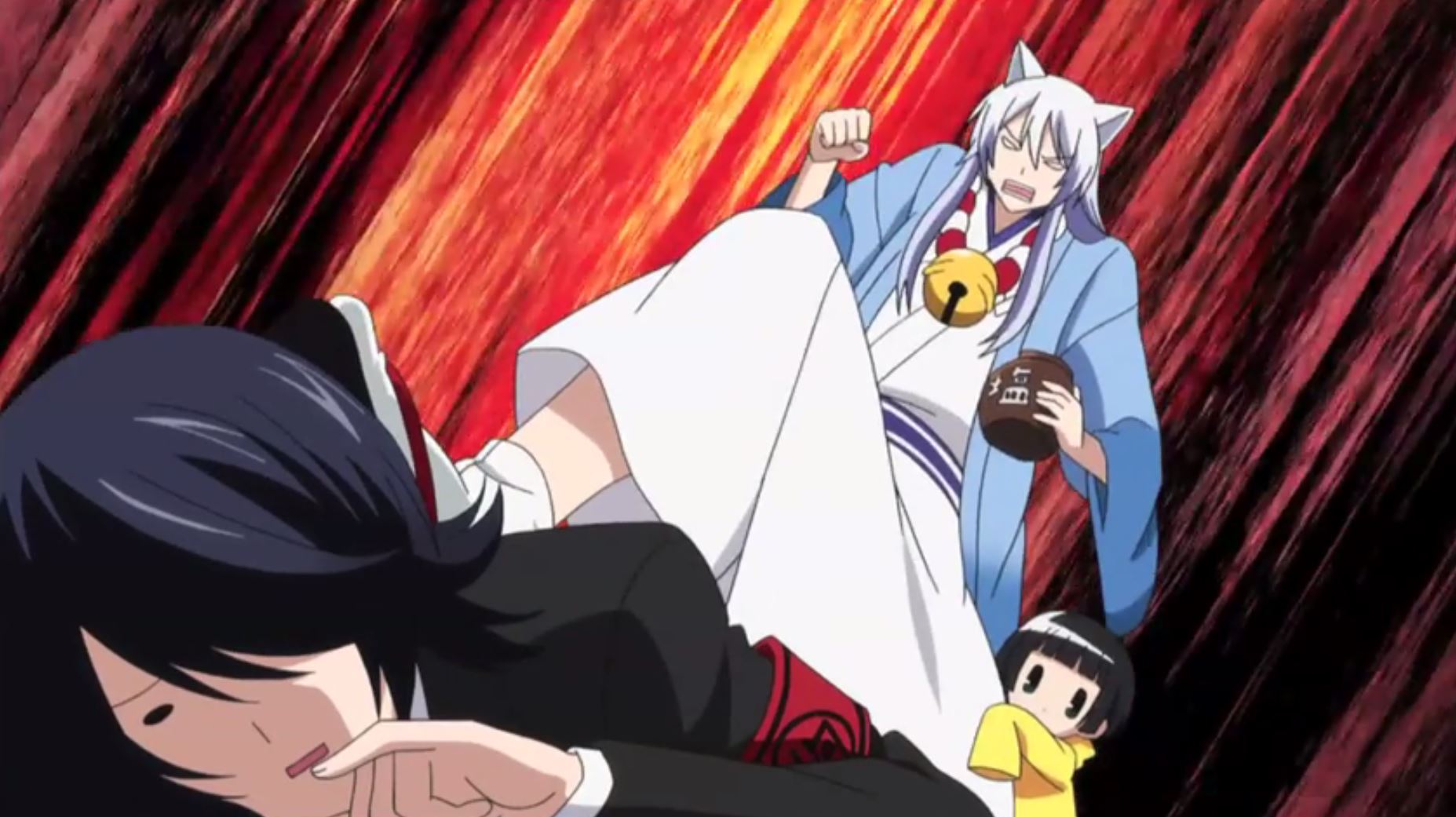 As voice actors go, this is the year of Daisuke Ono. After fist-pumping his way through JoJo's Bizarre Adventure: Stardust Crusaders and winning our artistic hearts with Barakamon, Ono charms his way through this anime as the fox spirit Kokkuri-san. He knows how to get the big laughs, not to mention hit those heartfelt moments that make the series shine even more-so. Ryō Hirohashi plays Kohina with monotonous glee, showcasing a don't-care attitude that secretly covers a childish joy for all that's happening around her.

TMS Entertainment animates Gugure! Kokkuri-san with a great blend of beautiful scenery behind some goofy-looking cartoon characters. When in human form Kokkuri-san, Inugami, and Shigaraki appear nicely drawn, but when in their spirit form... well, let's just say that people are gonna want to buy plushies of these characters whenever they appear in stores and conventions around the world. One of the best parts of the animation happens when Kohina unknowingly lets out her humanistic side. For the most part she appears very doll-like (again, the merchandise for this anime will be selling like crazy), but when she looks human you get a warm sensation in your face, as if you can actually feel this small bit of humanity that the young girl reveals. It's a great touch to this anime comedy, adding a nice sense of emotion to a well-thought out series. 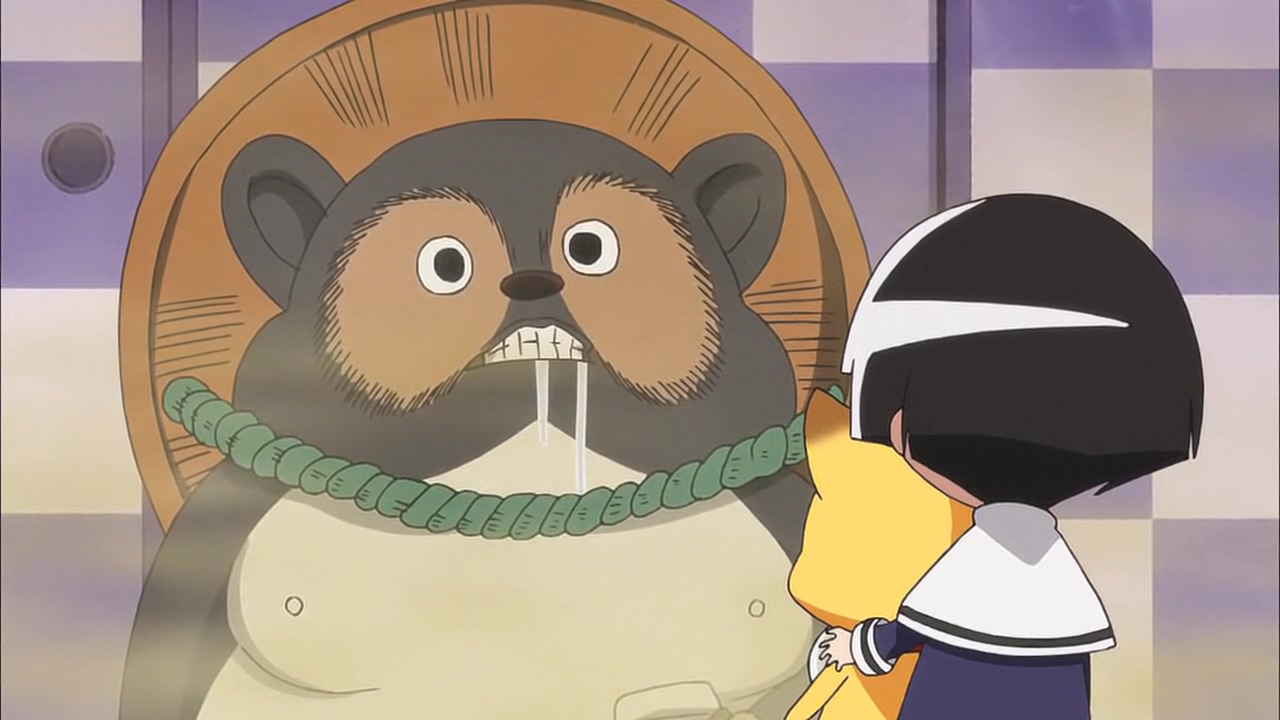 The main male cast performs the opening theme song "Welcome!! DISCO Kemokemoke," with a beat that will get anyone listening dancing and shaking their hips. It's a fun track that, while poppy and somewhat feeling manufactured, builds the viewers' anticipation up for the silliness that's about to happen. For the emotional side, there is the end theme "The Merry-Go-Round Song" by Suemitsu Atsushi (of SUEMITSU and the Suemith), a beautiful song engulfed with talented piano-playing and lyrical wonderment.

Gugure! Kokkuri-san is one comedy, anime or not, that no one should dare miss. While the spiritual references may go over the heads of those unfamiliar to Japanese folklore, a little exposition given to each character will fix any confusion viewers may have. Simply put: prepare your spirit board, cook up some instant noodles, and get hilariously cursed by one of this year's best anime comedies.

Gugure! Kokkuri-san can be viewed on Crunchyroll and Hulu, and has been licensed by Sentai Filmworks