Woah Dave! has to be one of the weirdest little Mario Bros. clone I've ever played or seen before. The game doesn't have a story, just the game. What little the game reveals to the player is inconsequential, and the player is left with something that likely isn't worth the five bucks it asks for.

The game is set up and presented as a truly old arcade game that could have been made in the late Seventies, with radical looking font type-facing. Much like the name, it also sounds like some kind of drug-induced trip. You control Dave, which for reasons unknown to the player is a Green Goblin-looking humanoid who is being attacked by aliens. They hatch from eggs, and if not taken care of, they will evolve and become even more dangerous. There is no reason given, and the gameplay is basically just to survive and kill the enemies to collect as many coins as you can before dying three times and getting a Game Over. To defeat his enemies, Dave will have to throw Skull Bombs onto the eggs before they hatch. If they do hatch, then you will need to kill the enemies with other eggs or more Skull Bombs. Letting enemies live will make them more dangerous, but the coin yield is, of course, higher. There are also special Woah blocks that kill all on-screen enemies. 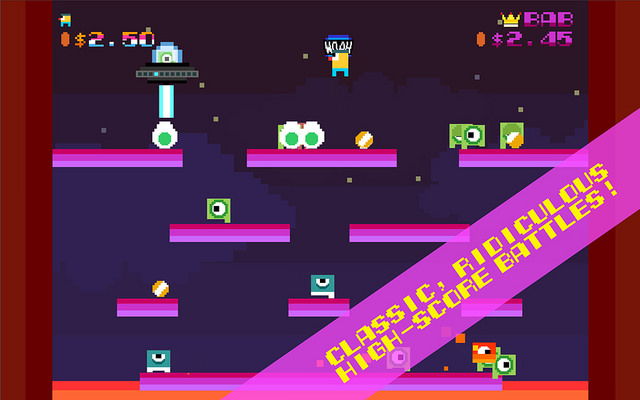 The Woah blocks themselves are a big reference to the fact that this is indeed a Mario Bros. clone, but there are some differences. Enemies spawn most anywhere on the screen randomly, the game doesn't have some twisted space that makes you warp onto the other side of the screen from the other end, and you throw things at other things rather than knocking them out from underneath and kicking them. The game's graphics are pretty simplistic, and look more like an Atari game than the classic arcade title it's inspired from. The music starts out basic, but the longer you survive and rack up coins, the more the tempo of the beat increases, as well as the difficulty. One thing to note is that Dave can 'float' to slow the descent of his jumps a bit. This can save your life when in a potential pinch, or help regulate the trajectory of Dave's throws.

There really isn't much else to Woah Dave! other than that. For completionists though, there is a small list of achievements and unlockable difficulties, which of course are based on hitting score thresholds. There are supposedly more secrets to unlock that are currently unknown. I keep thinking that this game was born from a drug-induced wager to make a statement about the ridiculousness of the iOS game bubble, and providing commentary on the one-dollar game-sphere there. But this game is two bucks on iOS, and a whopping five on Steam and 3DS. While it might be a decent time waster for quick sessions and high scoring obsessives, it's hard to recommend it on the non-iOS platforms.

The Good – The game is a quick, simple Mario Bros. clone.
The Bad – Not much to the game other than that.
The Ugly – It's price on the non-iOS stores might be a bit too much for what it is. Expect a drop, though.

SUMMARY: Woah Dave! is a decent little time waster of a Mario Bros. clone, but its simplistic presentation and price tag might turn off many.