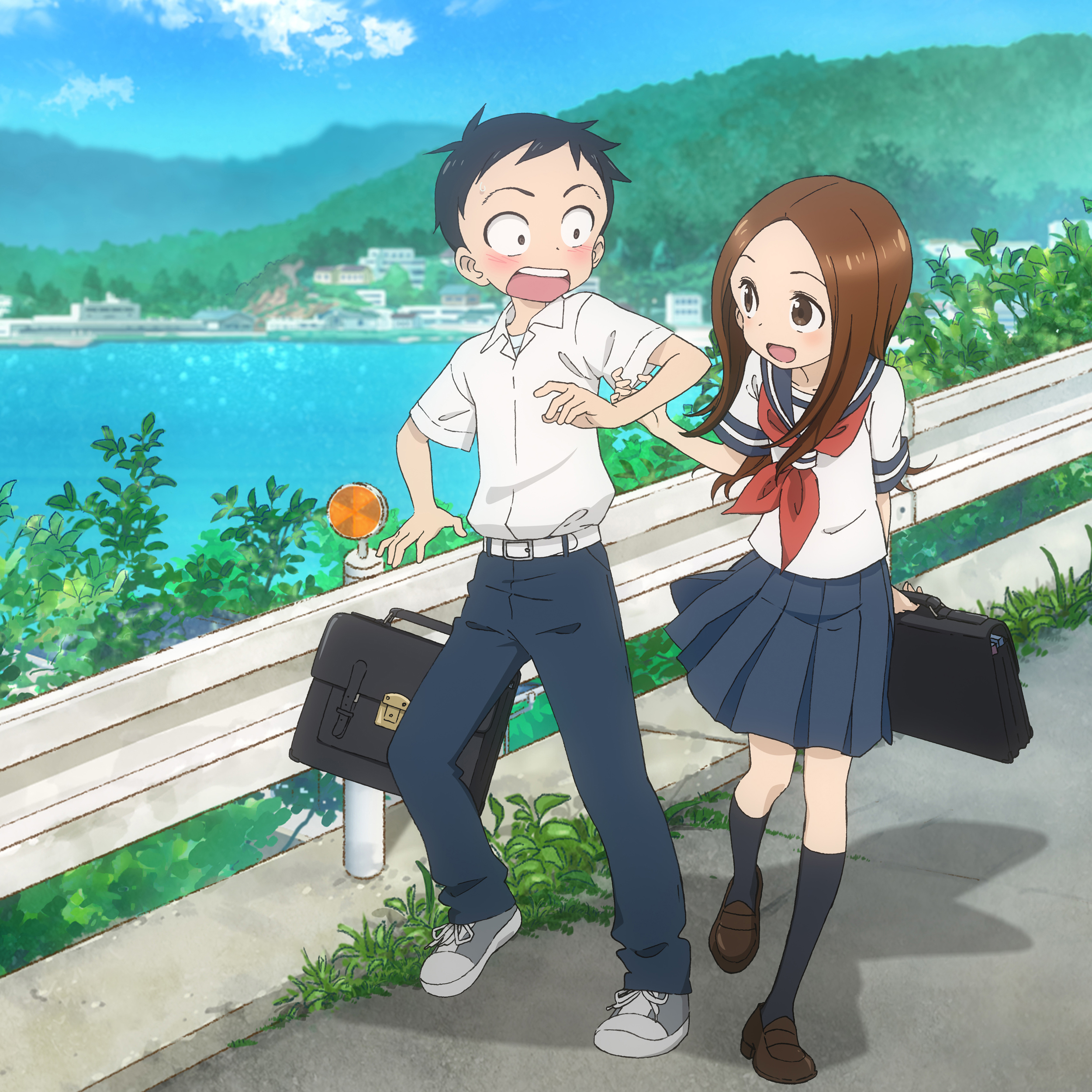 In western fiction, teasing is usually presented with a side of repercussions and dark underlying moral lessons. Someone teases another person, and then usually that person walks a very crooked path towards either harming themselves or taking care of the bully in the most brutal of fashions. Yes, teasing is a real problem in our schools and our daily lives, and I can understand why people would showcase the act and its end result in such a gripping way. However, there is another side of the teasing spectrum that you don't see often in just about any form of fiction these days, and that's the kind that blossoms into romance.

Karakai Jozu no Takagi-san (or "Teasing Master Takagi-san" in its English translation) is one sort of rom-com that not only brings teasing towards a pathway to the heart, but manages to do so in the most sweetest and innocent of ways. And it's done so without malice, cruelty, or even with any sort of true evil intention. Instead, the story of Takagi (Rie Takahashi/Sarah Wiedenheft) and Nishikata (Yūki Kaji/Aaron Dismuke) is more focused on the growing relationship between two classmates that's resulted from the teasing. 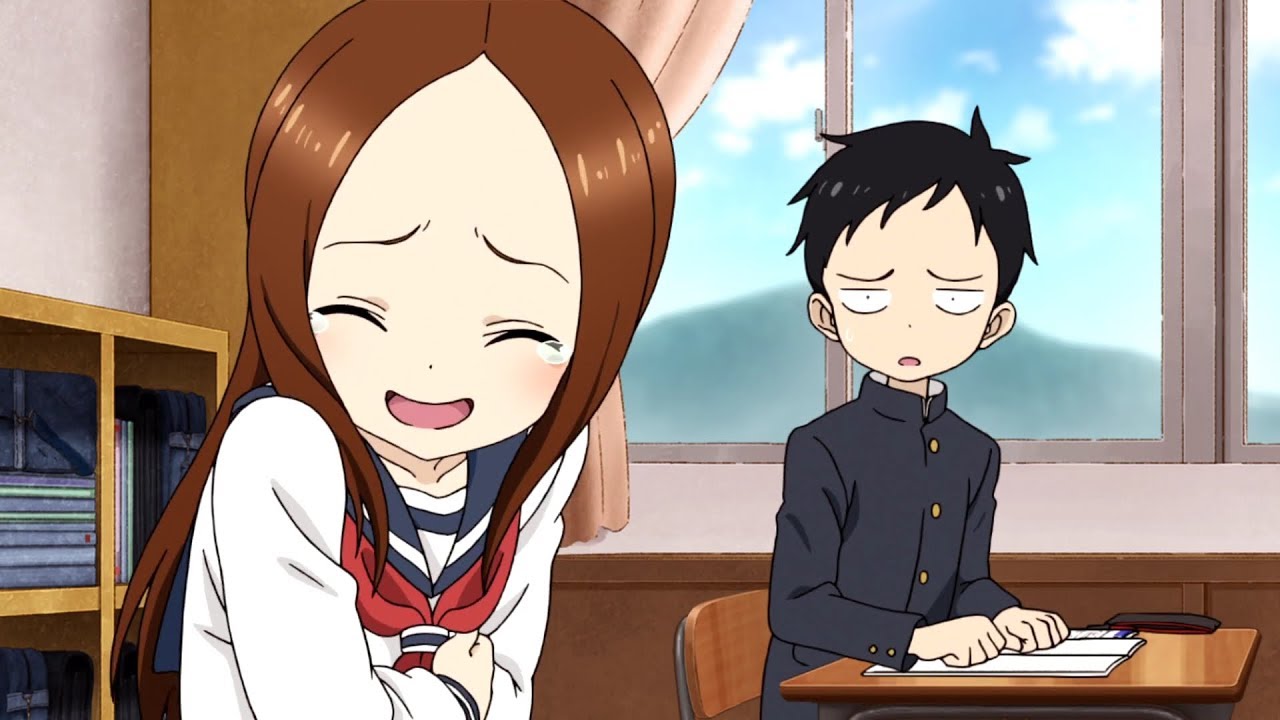 Each episode of Karakai Jozu no Takagi-san is split into a few vignettes, with the setup usually the same. Nishikata aims to one-up Takagi in the art of the tease, but she somehow finds a way to be a few steps ahead of him. This can occur in the classroom, on their way to and from school, via chance meetings, or even planned hangouts. Takagi can tease in various ways, from something homework-related or etiquette-based to something like picking out a swimsuit or learning to ride a bike tandem-styled. On some occasions they'll even bet on something, be it involving free-throwing a soda can into the trash or guessing one's recent test score.

All of this is presented in a rather lighthearted fashion, with Nishikata always feeling embarrassed with Takagi's closeness and the female peer always enjoying her time with the often red-faced lad. And while there's an emphasis on the teasing aspect on the show, that's not what Karakai Jozu no Takagi-san is really about. Rather, it's what this back-and-forth between Nishikata and Takagi is leading towards that makes the whole affair both cute and entertaining. It's easy to root for these two both as teasing competitors and for a couple's pairing, thanks in part to how the series is presented. (A spinoff series by original creator Sōichirō Yamamoto answers the question brilliantly regarding how the two will fare in the future.) 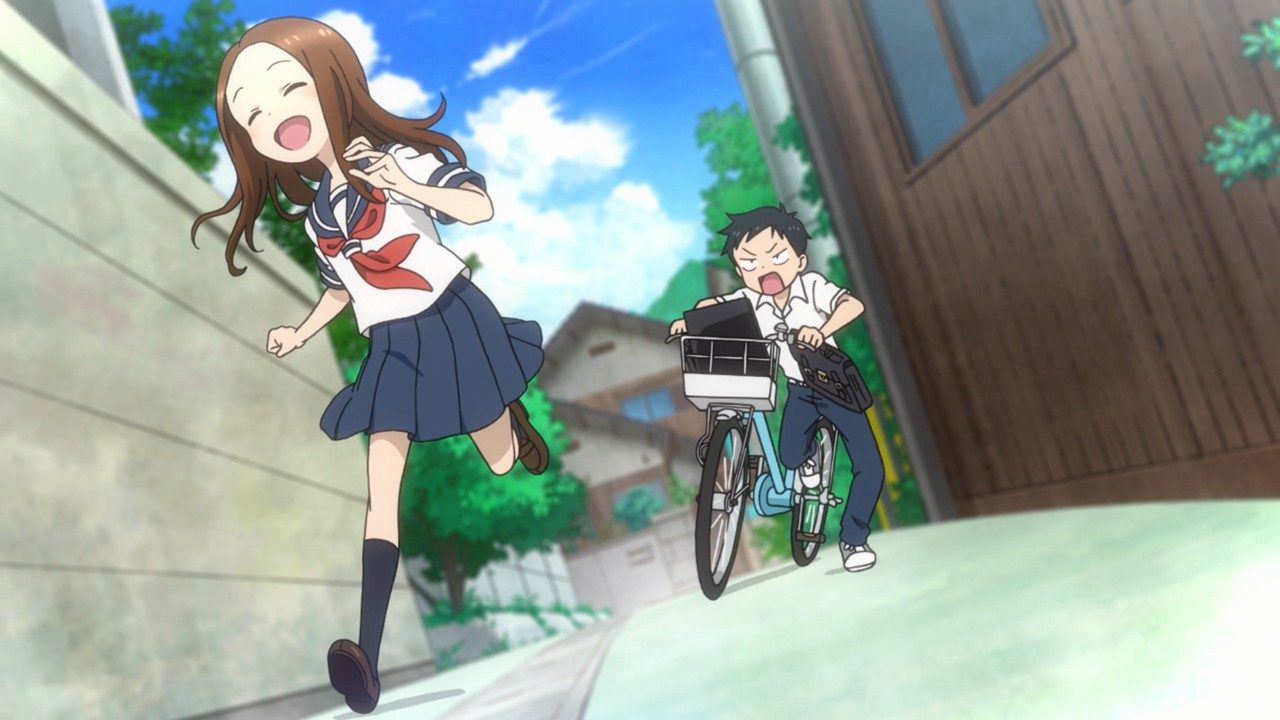 A few times in the series, the show changes its focus onto three of Takagi and Nishikata's close classmates. The snippets feature Mina (Konomi Kohara/Leah Clark), Yukari (M.A.O/Kristen McGuire), and Sanae (Yui Ogura/Kristi Rothrock), as they basically chat about avoiding homework, the act of swimming, and even the taste of certain beverages. It's not as deep and clever as the main aspects of Karakai Jozu no Takagi-san, but they're very entertaining in the same way the Osaka/Tomo/Kagura bits in Azumanga Daioh were, with the idiocy between the three resulting in some big laughs.

What also makes this anime work so well is the voice-acting performance of the main duo. The chemistry between Takahashi and Kaji in the Japanese dub not only feels natural, but they both emphasize their respective punchlines with a great mixture of adorableness and hilarity. Both are sweet in their delivery of their characters, resulting in an overall warmth within their performances. The same can surprisingly be said about Wiedenheft and Dismuke in the English dub, although the comical aspect of the series is pushed forward more in their portrayal than the sweeter mentality. However, when the time to be heartfelt comes, Funimation's adaptation shines nearly as bright as its Japanese counterpart. 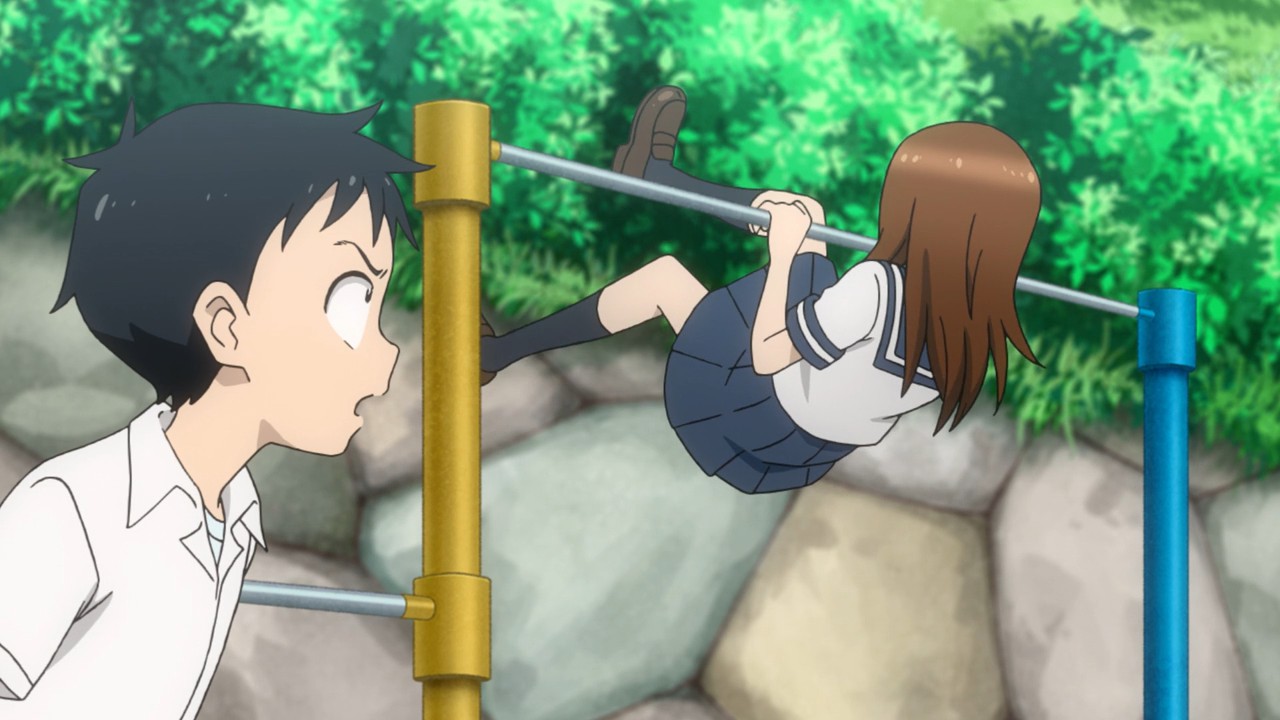 Shin-Ei Animation (Tonari no Seki-kun, Crayon Shin-chan) presents the characters' personalities with the right dose of comedic expression and cutesy attitude. How Takagi laughs when she tricks Nishikata is done so with a Disney-like flare, with Nishikata's embarrassment reminiscent of 90s/early 2000s GAINAX comedies. The school, classrooms, scenery, and homesteads that surround them are drawn wonderfully. With that being said, outside of the beautifully-rendered nature aspects, the areas that Takagi and Nishikata roam look a bit too similar to most other slice-of-life rom-coms that have come out in the last couple years.

Composer Hiroaki Akagi puts an emphasis into pianos and recorders in most of the score, engulfing the world in the childlike mentality that the two characters have throughout its run. It's soft, sweet, and often innocent in its presentation, meshing well with both Takagi and Nishikata's personalities. Opening theme "Iwanai kedo ne" by Yuiko Ōhara has the right amount of heart and warmth in its presentation, easily being a fine representation for viewers to see what's to come from the show's main duo. Meanwhile, Takahashi finds herself doing various covers for the end theme, performing some surprisingly good renditions of songs originally sung by JUDY AND MARY, chatmonchy, and Ikimonogakari. 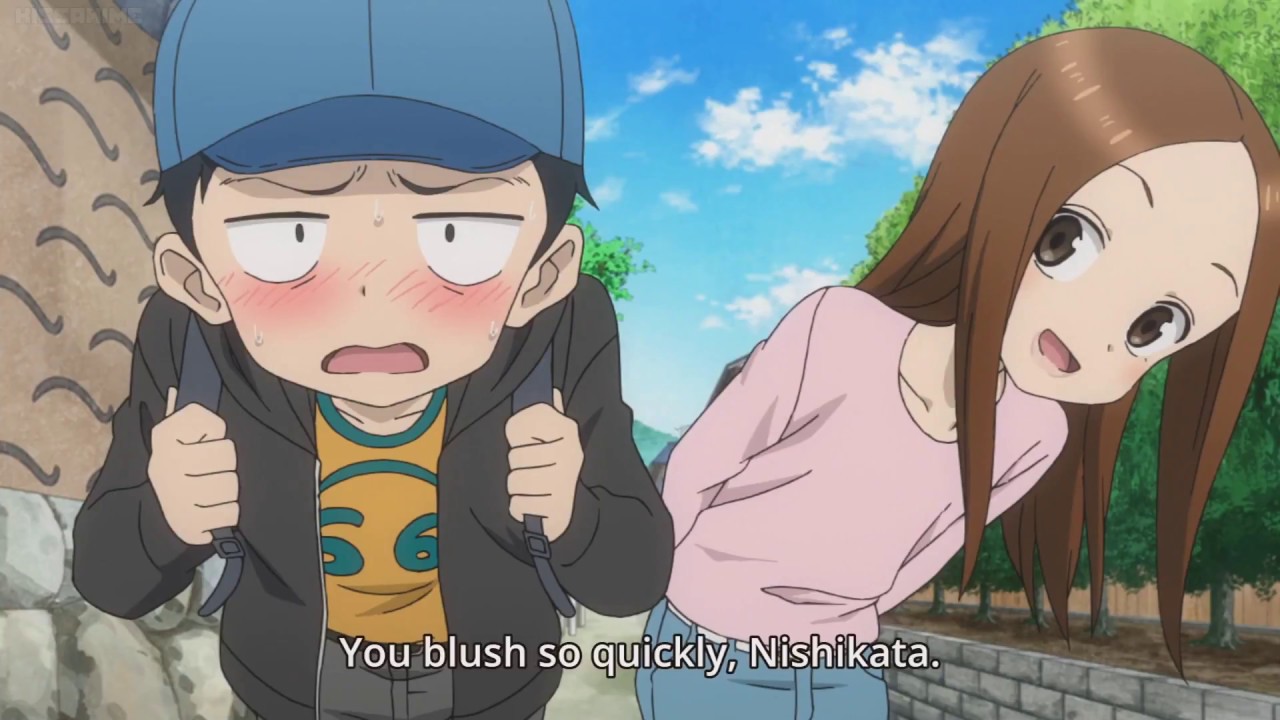 Karakai Jozu no Takagi-san presents the right kind of teasing in a wonderfully surprising light. It's cute, filled with a lot of heart, and has a sort of endearingly innocent quality that anime rom-coms seem to lack these days. You more than likely won't find a comedy this kind, even when the duo go all in with the teasing. Takagi may often be the winner in the tease-off, but in the case of Karakai Jozu no Takagi-san, both she and Nishikata win for best (probable) couple of the Winter 2018 season. If only more fictional and real-life romances took a cue from these two goofballs...

Karakai Jozu no Takagi-san can be viewed on Crunchyroll, FunimationNow, and VRV. It has been licensed by Funimation. Episodes 1-7 were observed for this review. Promotional consideration provided by Crunchyroll and VRV.