HomeAnimeGoofing Off With Time-Killing "Seki-kun"

Goofing Off With Time-Killing "Seki-kun" 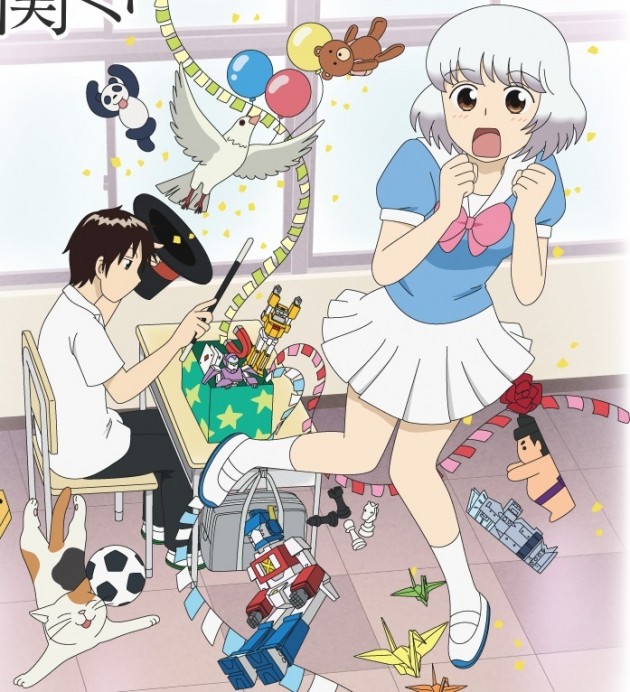 Goofing Off With Time-Killing "Seki-kun"

Have you ever had one of those classmates you sat next to that seemed to do everything except pay attention to the lessons on hand? They'd tap on their desks, chew their pencils, stick gum under their seats, and on many occasions just sleep. This is pretty much what happens to Rumi, who finds herself sitting next to Seki, a young boy that does everything at his desk except study. Hence why the show is called Tonari no Seki-kun: The Master of Killing Time.

Seki isn't your average ADD-riddled kid, though. Instead he finds himself wasting time with games, chores, and playing house with his Transformers. Rumi tries to pay attention in class, but she finds herself so immersed with what Seki does that she can't keep her eyes off him. And who could blame her, really? The kid knows how to do some pretty incredibly imaginative things.

For example Seki is playing a game of Shōgi (Japan's version of chess), where he has the pieces on one side of the board collapse due to the king being betrayed by his own soldier. It plays out like a Shogun battle you see in drama serials: soldiers try to take out the traitor, only to be forced to battle under him, which in return acted as a distraction for the other side to come in and try to slay them all. This happens all in the mind of a kid playing with game pieces, and Rumi intervenes in the end will leave you smiling.

One episode that shines brightly involves kids passing notes in class, where Seki finds himself playing post office and delivering these tiny notes in an orderly fashion. In all honestly, I'm actually surprised that no one has ever thought of a concept like that. (Imagine the money a kid at school could make doing that!) When Rumi tries a pass a note to Seki asking him to knock it off, she finds that trying to deliver a message in class is as much of a pain as dealing with the real-life post office.

As the episodes each run under eight minutes long the gags fortunately don't feel stretched out. The premise usually starts out the same, with Rumi trying her best to keep track of what the teacher is saying, only to lose her concentration towards what Seki is doing that day. What's good about Tonari no Seki-kun is that it doesn't try to walk a predictable path as to how it will all turn out in the end. Another episode involving Seki crafting a Japanese stamp out of an eraser leads towards laughs because of the implementation of a third student that's sitting next to him, and how he takes it when his hard, wasteful work is destroyed by another person will get a good chuckle out of you, even though you might feel bad for him.

The series is as bright and colorful as Seki's imagination, thanks in part to the team at Shin-Ei Animation (who are also responsible for Doraemon and Crayon Shin-chan). While nothing will blow you away visual-wise the work done here showcases the gags in a finely-tuned manner. Its musical score isn't quite memorable, but the end theme by Japanese jazz drumming legend Akira Jimbo is as cool to watch unfold as it is to listen.

Tonari no Seki-kun may not be the most memorable series to come out this year, but that doesn't take away from the fact that it's quite the fun show to watch. It has plenty of laughs, and while no moral objective can be found it still serves as a nice reminder that the power of one's imagination can be used to create such awe-worthy concoctions. As Seki is the master of killing time, I think he'd approve of the way his shenanigans are presented in such a light-hearted manner.

Tonari no Seki-kun: The Master of Killing Time can be viewed on Crunchyroll. Originally posted on the ESH EGMNOW Page.