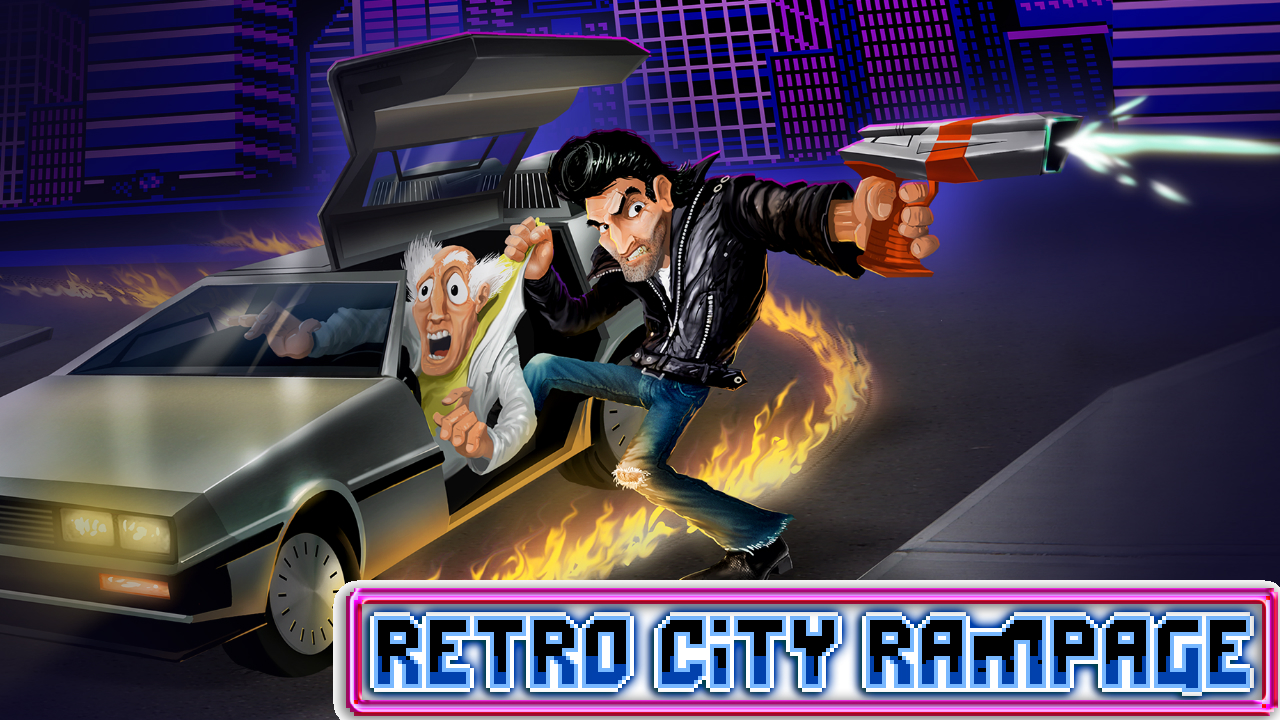 The 8-bit retro game Nostalgia Train keeps trucking along, and it doesn't seem to be stopping anytime soon. People seem to have grown weary of the trend as of late, passing off any game done in the style as baiting/cash-in attempts. However Retro City Rampage is definitely different from the pack.

Originally released on a variety of platforms at the tail and head ends of 2012 and 2013 respectfully, the game saw some success. But fast-forward to today and Vblank has decided to take a crack at making a 3DS port. This new version has received all of the fixes from the other versions, and tweaks to make a better 3DS experience, along with other deeper changes that make the game the most complete and definitive version to date. 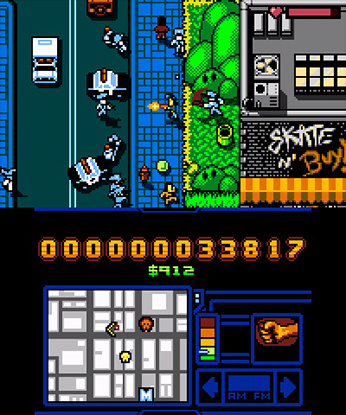 The game is one gigantic roller coaster of crazy. You start the game as a due simply called The Player as he joins a bank heist. Through the insane series of events that follow, The Player finds himself stranded in the past, and now he needs to restore the time traveling machine to get back to his own time. But he totally doesn't mind wrecking havoc on the city to do so. Like Grand Theft Auto you can do a variety of both story based and secondary side missions. The story missions are the missions that contain most of the game's references to classic gaming. There are also references from 80's and 90's pop culture, such as the Beastie Boys and Saved By The Bell. The game is basically a delivery system of everything that goes on inside the creator's head, and his head is pretty much VIDEO GAMES! What follows is pure insanity, but you can't have a good game without decent gameplay, right?

To get from place-to-place quickly, you can jack any vehicle, but make sure the cops are not around, otherwise you will need to ditch them. Thankfully the 3DS version makes this easier, as you can just clear the screen by killing them quickly or getting away fast enough. Otherwise you can pick up the cloaking coins, which thankfully they now drop after three or more cops are taken out. Missions themselves also received a number of tweaks to improve the pacing or re-balancing the difficulty. The game also has more checkpoints, and combat has improved greatly. You can now quick select weapons with the touch screen, and you can also jump while shooting. Having the second screen for a mini-map also helps a bit. It's just little things like this, when added up, that make for a more refined experience. 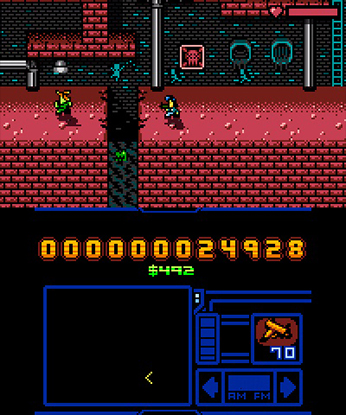 Retro City Rampage is filled with wonderful chip-tune music, and the 8-bit visuals work to compliment the sight gags quite well. With that said there are a few issues. The game can be a bit repetitive, but thankfully it's a short enough game that it's a minor issue. There are also some quirks inherent in the driving controls, which take some getting used to. There are also a lack of power-ups like armor or health upgrades, or weapon power or accuracy increases. Something like these might have made the Smash TV mission a bit more tolerable. A few more checkpoints for the 'Splosion Man mission would have helped, too.

But aside from that, Retro City Rampage is a solid title with a lot of replay value. There are arcade challenges, unlockable characters, weapons, and appearance altering services to purchase, as well as those achievements for the die hard completionists. If you liked the original version and have a 3DS, get this version. It's the best overall version of Retro City Rampage, even if it's not as sharp visually as the Vita version. (At least the improved screen size makes up for that.) But yeah, if you haven't already picked it up, then definitely give it a shot. 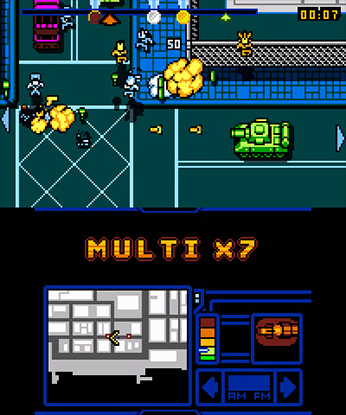 The Good: Absolutely crazy homage to GTA with many classic (and some contemporary)gaming and 80's/90's references.
The Bad: Driving controls take a bit getting used to.
The Ugly: If you hate referential humor, you will hate this game.

Summary: An Open-world GTA game, as if it had been released on something like the NES. Although it can be a bit repetitive, it has a short enough length to not overstay it's welcome.

Goofing Off With Time-Killing &quo...