HomeAnimeANIME REVIEW | A Savory Dish Is Served In "Food Wars!"

ANIME REVIEW | A Savory Dish Is Served In "Food Wars!"

ANIME REVIEW | A Savory Dish Is Served In "Food Wars!"

It's not every day when you can watch an anime that showcases something so enticing that the images shown will make you want to lick the TV screen. Food Network programming may result in a reaction such as this, but how can something animated make one salivate? Food Wars! Shokugeki no Sōma shows us how its done, and like a masterful cuisine its taste stays on your pallet many days after experiencing it.

Based on the manga by Yūto Tsukuda and Shun Saeki, Food Wars! follows Sōma Yukihara, the son of popular local cook Jōichirō Saiba. Out of the blue the father decides to take off and showcase his skills across the world, closing down his shop for three years and leaving Sōma perplexed. Before leaving Jōichirō gives Sōma a challenge: survive Totsuki Academy, the hardest culinary school on the planet. Never one to back down on a challenge Sōma accepts, throwing himself into a school where only the best chefs survive. 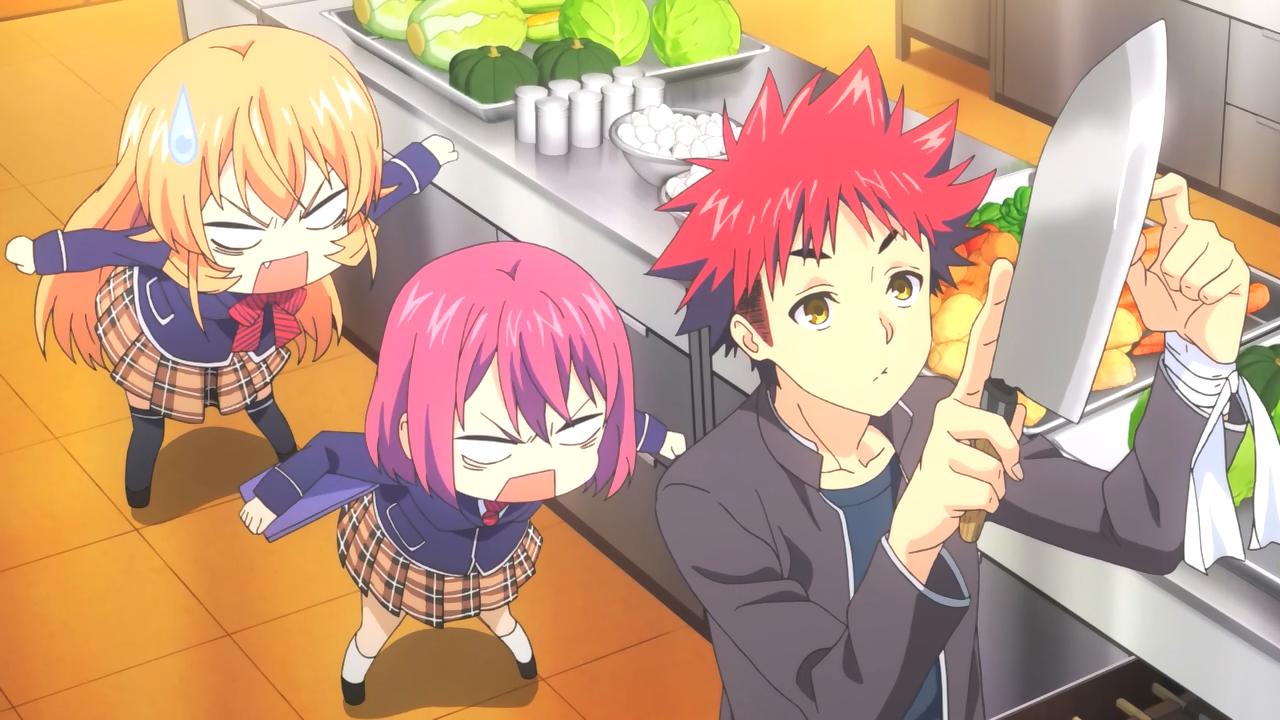 After making an enemy out of the elite student Erina Nakiri, Sōma is accepted into the academy, declaring that he will graduate on top and angering the rest of the student body. From here he starts making friends, bonding especially well with Megumi Tadokoro, who nearly faces expulsion until Sōma comes in and helps her find her confidence. Residing in the Polar Star Dormitory -- the same place Jōichirō stayed as a student -- Sōma meets many comrades and bitter rivals as their cooking is tested not just by the teachers, but by their fellow brethren as well.

In Food Wars! two characters can face off against one another in a match known as a "shokugeki," where something of equal value must be placed on the line. It's here where the series gets an Iron Chef kind of vibe, as the contestants must create a dish that features the same key ingredient (i.e.: a meat, a spice, a specific kind of meal, etc.). Like any other cooking competition show the battle can surprisingly become intense, and the animation quality shows off terrifically how fierce of a fight it can be. 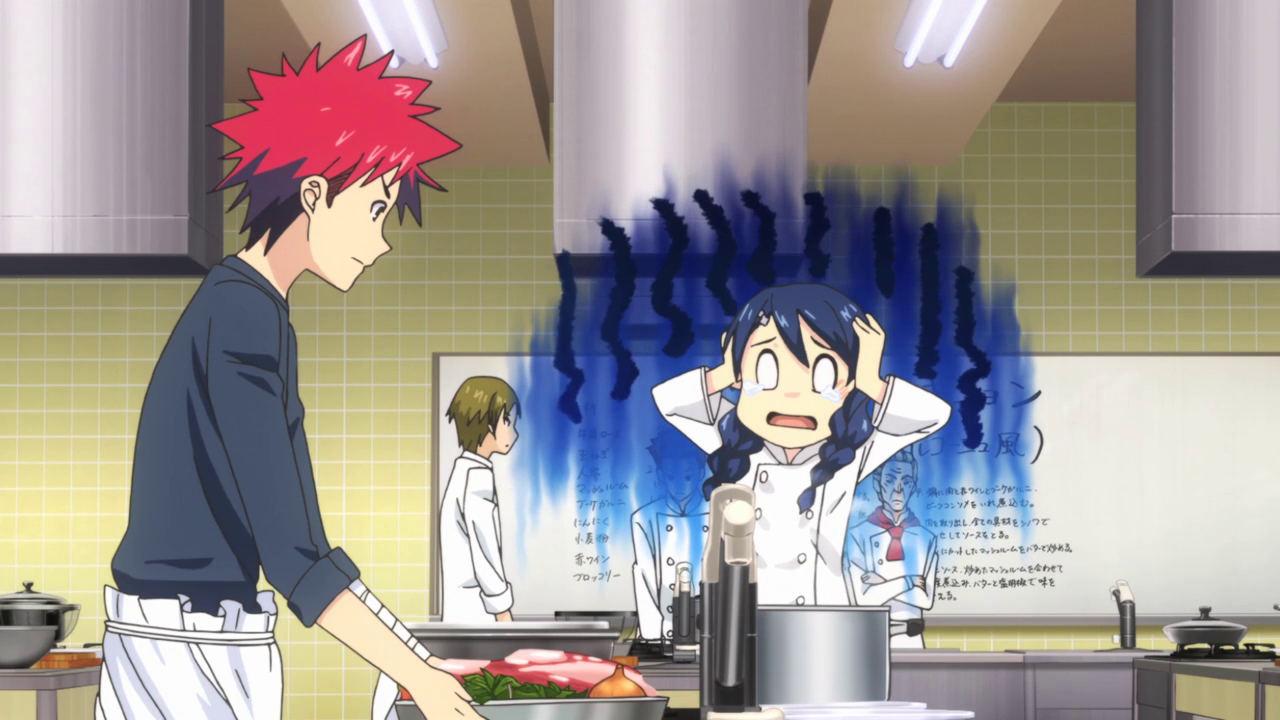 However it's when you see the actual food when J.C.Staff's animation quality is at its peak. Whether it's a Beef Bourguignon, Chaliapin Steak Donburi, an apple risotto, or even something as minuscule as karaage, the tenderness of the dish as well as its sweet juices are in full detail; you can just smell these meals coming off your screen, they're so advertising. The humor in the taste-testing is also done with some cunning shots and silly godlike appraisal. It's rare not to see someone magically become naked and moaning with tongue-tied satisfaction over how good a dish is.

When it comes to the actual story, Food Wars! is something we've come to see in many other shonen series. Or, to be more bluntly, this is the foodie's equivalent of Naruto. Sōma strives to be the best cook in the academy in the same way Naruto wants to become the Hokage in the Hidden Leaf Village. In fact these two protagonists share a certain level of cockiness in their personalities, and whether or not we'll see Sōma showcase a level of maturity in the same way the master of the Shadow Clone jutsu has in his later life remains to be seen. 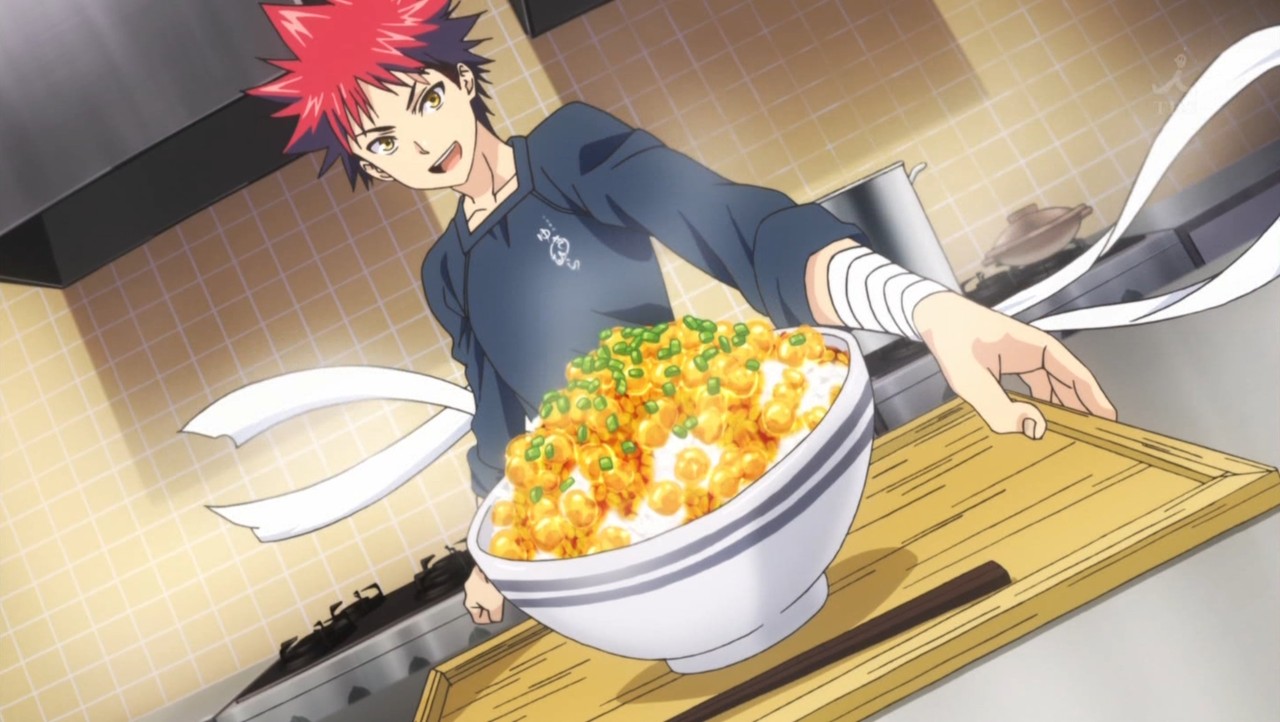 However it's in the writing where the series shows off its strengths. Sure, it can go for some cheap laughs from time-to-time -- especially when Sōma subjects a friend to a disgusting concoction that may or may not involves tentacles -- but it's when something big is on the line with a student having much to lose when Food Wars! reaches its finest moments. One great example of this is showcased when Megumi faces off against one of the world's top chefs in order to keep her place, as well as Sōma's, in the academy. It all goes down in a way least expected, with much heartache with a sudden glimmer of hope towards the end. Believe me when I say that this scene was one of anime's biggest nail biters.

As for the characters the voice actors did a fine job with their portrayals. Yoshitsugu Matsuoka (Sword Art Online, Is It Wrong to Try to Pick Up Girls in a Dungeon?) portrays Sōma as a cocky and kindhearted individual, one that yearns to both learn and use his knowledge to win. Minami Takahashi (D-Frag!, Magimoji Rurumo) takes on the role of Megumi with a slice of social awkwardness mixed with a determination to survive the harshest challenges the academy throws at her. As Erina, Risa Taneda (Your Lie in April, Strike the Blood) is mostly cold, and while it may be because the anime season ends before her character truly evolves, her voice doesn't show as much range as it does in previous anime she's taken part in. Honestly, though, no one in the cast outshines the rest of the pack, as everyone has their own special moment in the spotlight. However I will say that Shizuka Ishigami (SHIMONETA) always managed to put a grin on my face with her role as the meat-loving Ikumi Mito. 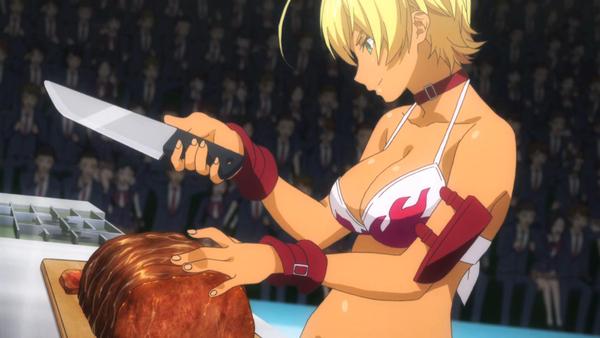 Tatsuya Kato (Yatterman Night, The Disappearance of Nagato Yuki-chan) composed a score that plays well during both the more light-hearted moments of Food Wars and the most intense food battles that are showcased both on the grand stage and even the classroom. However I can't help but think Kato went too far into the game show motif in regards to the competitive parts of the score, as there were a few selections that felt too much like something you'd hear in Who Wants to Be a Millionaire rather than on a cooking show. Ultra Tower's first opening theme "Kibō no Uta" manages to combine both the fun and hardships that come with taking part in a competitive academy, whereas the second theme song "Rising Rainbow" by Misokkasu focuses too much on the fight rather than the good times. "Spice," the first end theme by Tokyo Karankoran, captures the happy and hardworking life within the Polar Star Dormitory with the finest of ease; its second end theme, "Satchan's Sexy Curry" by Seiko Oomori, is but a one-off gag that overstays its welcome soon after it's been shown off in the Autumn Election preliminaries.

In the end the real star of Food Wars! is the food itself. Yes, the characters and the story they tell are great, but when you see what these students and top chefs make you just wanna take a look at your bowl of reheated SpaghettiOs or Kraft Macaroni & Cheese and frown with disgust. The urge to go into the best part of your town and seek out an amazing entree will be strong after just the first episode, with maybe some of you needing to attempt to cook up one of the dishes seen here in the show. (Trust me: I know many friends who already have, with some succeeding and others failing.) 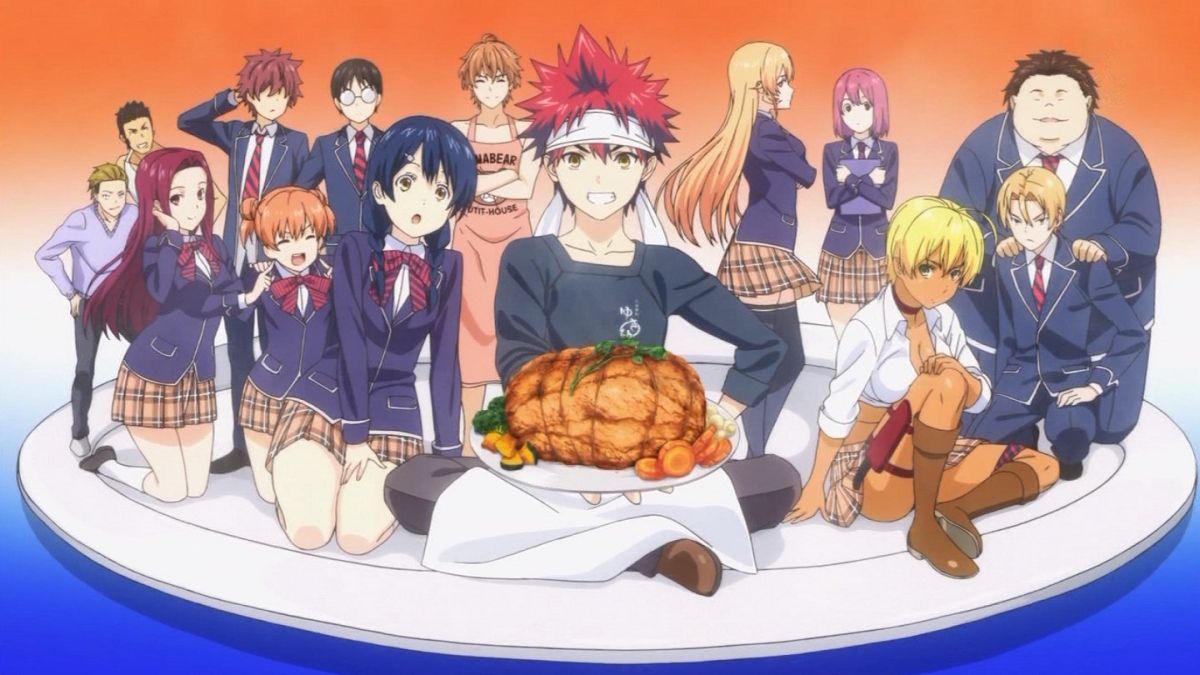 Food Wars! Shokugeki no Sōma may not inspire you to become the greatest chef in the world, but it will make you want to eat better as you cheer on Sōma and the rest of his dorm-mates. The downside to the show is that the season ends just when the toughest part of the competition is about to begin. There's always hope for a second season, and considering the popularity the anime had on both sides of the Pacific it'd be stupid of them not to do so. Until that time comes, we'll be reading the original manga as we fight every desire to eat the pages.

Food Wars! Shokugeki no Sōma can be viewed on Crunchyroll, The Anime Network, and Hulu. It has been licensed by Sentai Filmworks. Episodes 1-24 were observed for this review.