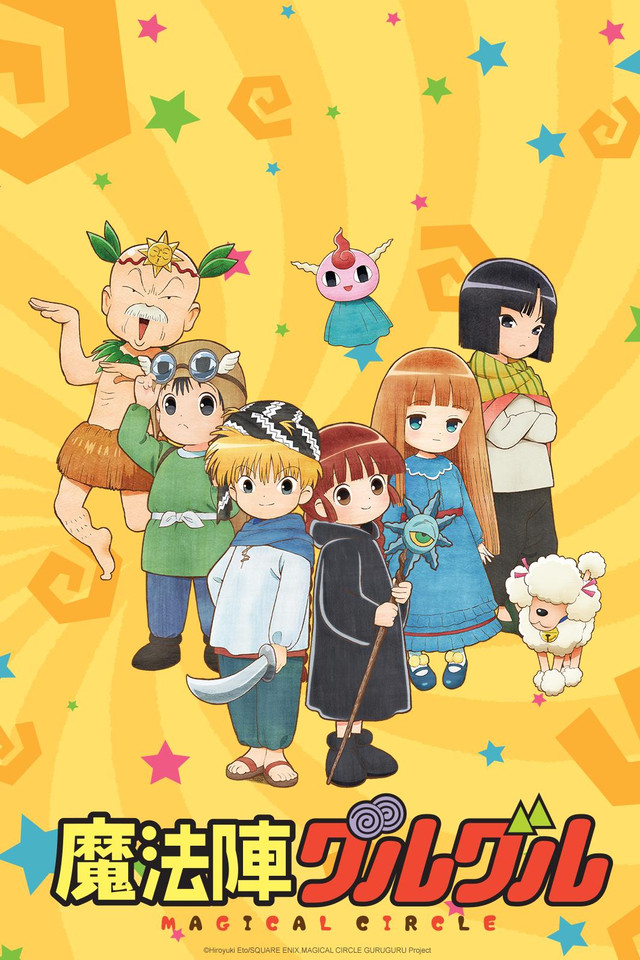 In every adventure, a hero sets out to thwart out evil for the greater good. Some are destined to fight, whereas others are pushed to the brink and finally stand up in the name of justice. However in the case of Nike (Shizuka Ishigami) the call to action comes in the form of his parents literally slingshotting him towards the path of danger and mystery. And trust me: he wanted no part of this journey!

Thus begins Magical Circle Guru-Guru, whose original manga by Hiroyuki Etō is celebrating its 25th anniversary this year. To mark such an occasion, Production I.G (Haikyū!!, Ghost in the Shell) have produced a new anime series that plans to condense its 16 volumes into 24 episodes. For the first time since its creation, Etō's tale of magic, humor, and adventure has crossed the Pacific in search of an international audience. After the first episode aired, I found myself asking a simple yet pondering question: Where has this series been all my life?! 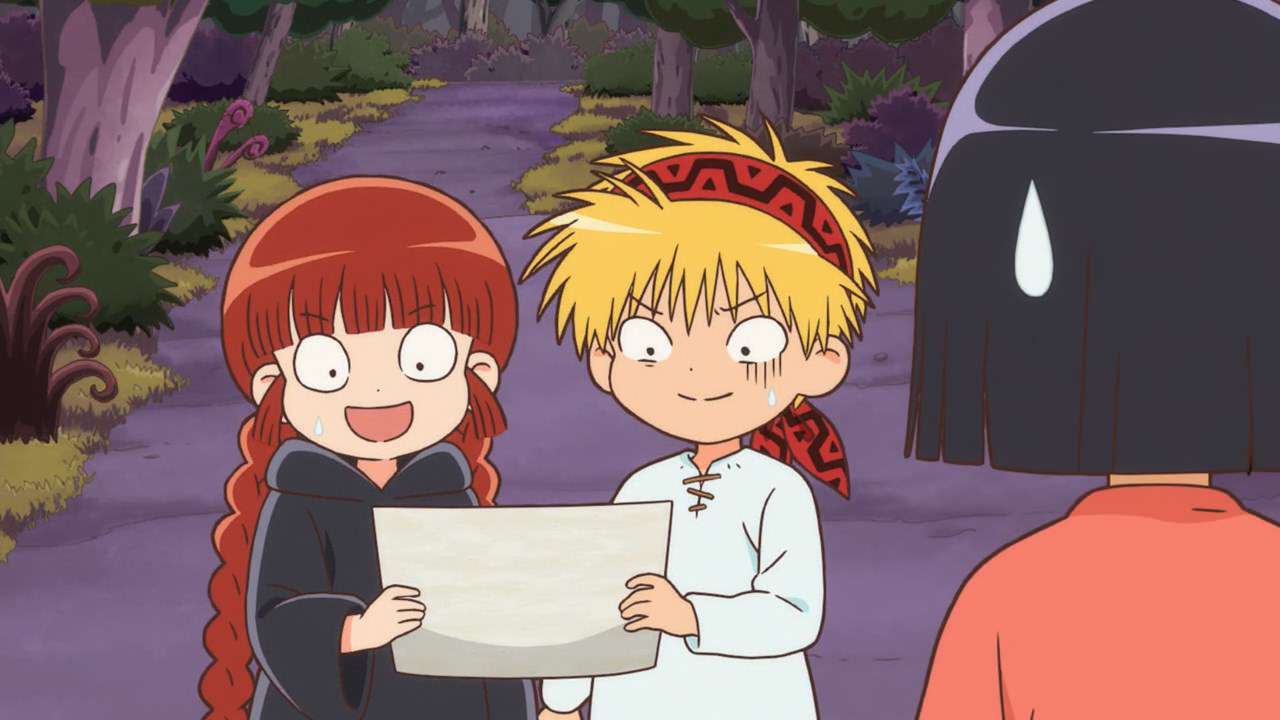 Taking influence from RPG video games of the 80s and early 90s, Magical Circle Guru-Guru focuses on Nike as he sets out to defeat the Devil King. Traveling alongside him is Kukuri (Konomi Kohara), a young magical apprentice who is the last descendant of the Migu Migu Tribe. According to legend the Migu Migu Tribe were masters of a dark summoning magic known as Guru-Guru, but besides the knowledge of how to do it, no one knows the location of the spells to concoct them. With hope on their side Nike and Kukuri set out to defeat a great evil and revive a long-lost great magic.

Along the way Nike and Kukuri align themselves with some interesting people, including a dance-crazy Old Man (Katsuyuki Konishi) that no one really likes, a loincloth-donning wind spirit guide named Gipple (Takahiro Sakurai), and a young priest-in-training named Toma (Yukiyo Fujii) who aims to grow alongside the hero & mage. But a dull moment never occurs on this adventure, as Nike & Kukuri fight monsters and foes around nearly every corner. Not only do the two allies learn and grow from their battles, but they manage to defeat all who stand in their way with quite possibly the strongest funny bone in the land. 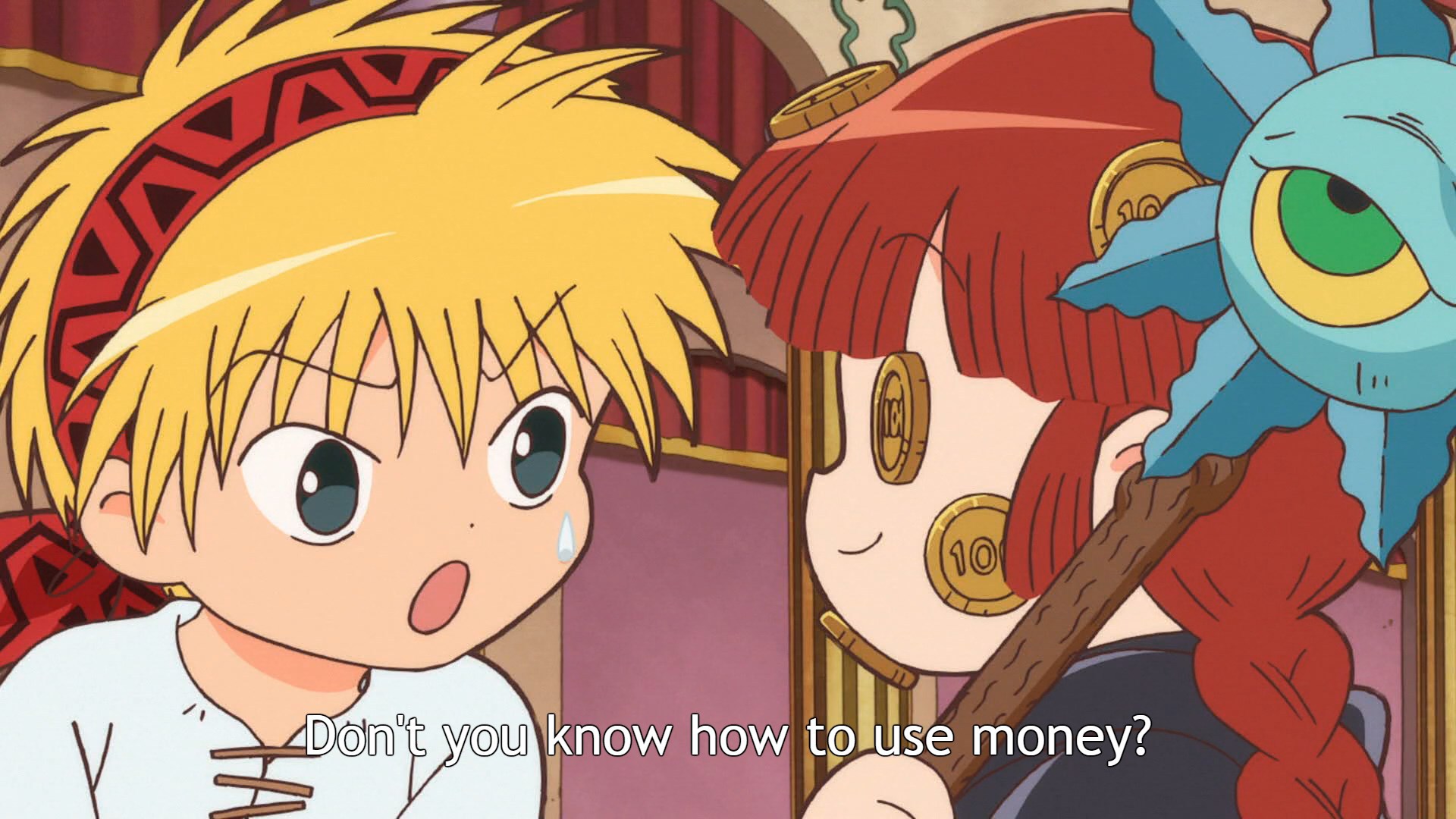 Rarely has a show come out that not only delivers huge laughs, but manages to do so almost every other second. The jokes and visual gag fly by, with practically every one of them hitting their mark. In fact, this is the first show in a very long time where I found myself watching each episode twice. Words cannot describe how top-tiered the comedy is in Magical Circle Guru-Guru, it's that good!

Okay, perhaps I should try to describe some of the best bits without spoiling them. In abundance there are clever fart gags, one-liners that'll be quoted for years on end ("She's more than just a butt!" is my new personal rally cry, FYI), hilarious visual nods to Dragon Quest and Final Fantasy, and game text-styled narration that's very much in the vein of Ron Howard's in Arrested Development. If KonoSuba is the Archer of anime RPG comedies, then Magical Circle Guru-Guru is the Bob's Burgers of the genre. There's enough jokes to keep the kids laughing, while at the same time a great dose of adult humor is delivered to make older audiences snicker uncontrollably. 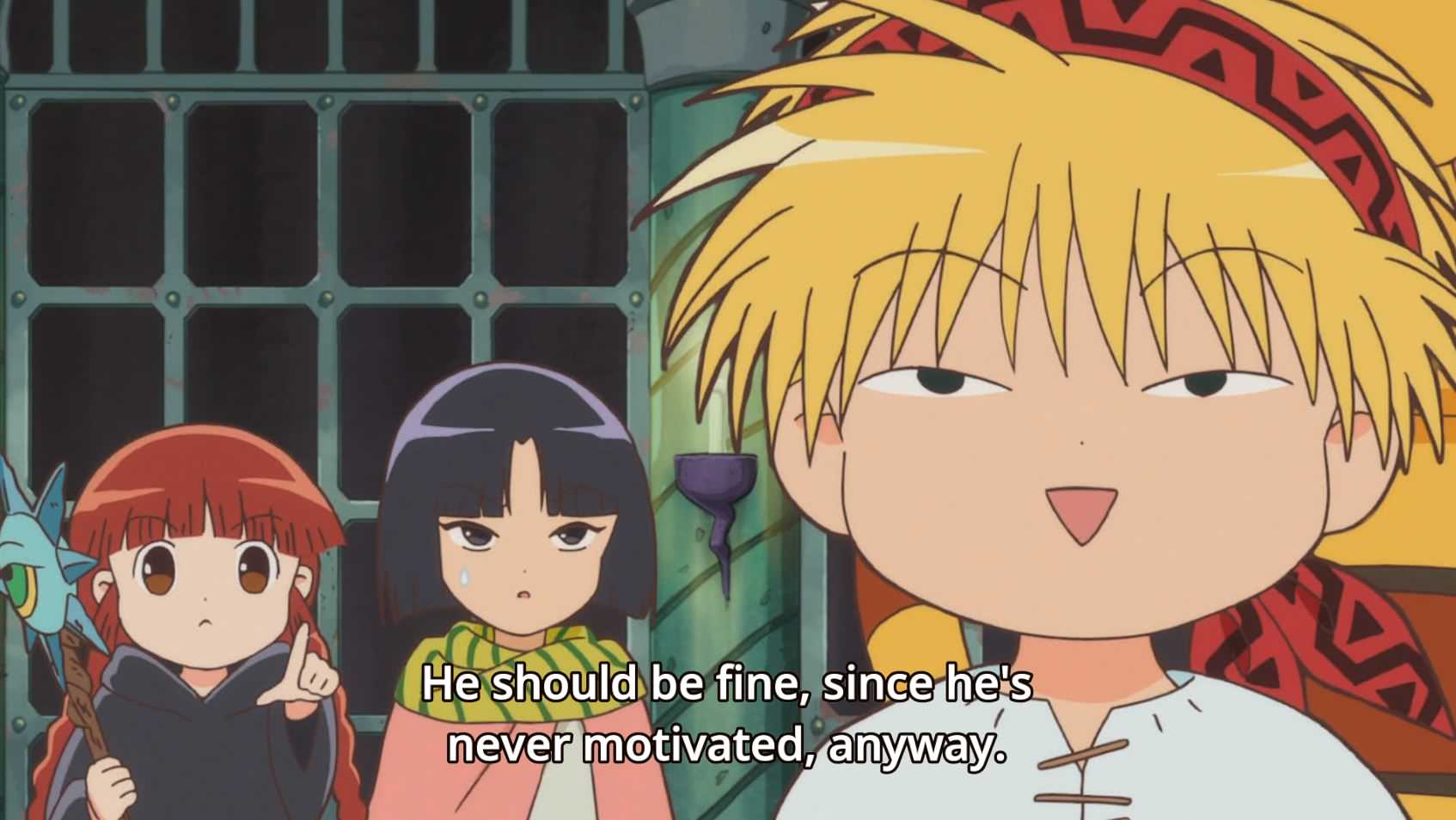 Outside of the humor of the show, the series contains a lot of heart. Behind their goofy eccentrics, these characters genuinely care for one another and aim to aid each other through the toughest of quests and fights. You can't help but feel good when watching Kukuri do her best to protect Nike (whom she calls "Hero-sama"), while Nike's carefree attitude and filter-free verbal exchanges come through with a snarky-yet-adorable smile. This series just spews joy from every inch of your screen and speaker throughout its entire run time, and anyone who dares say they don't have a fun time watching it may very well be in cahoots with the Devil King himself!

It's shocking to see Production I.G produce a show that comes with such a nostalgic appearance. Despite their resume that has many films and series with high-quality detail, the animators decided to instead turn the clock back with its visual style. Magical Circle Guru-Guru looks exactly like an anime from the 90s, from its character design to even its background and worlds. (The only thing that makes it different here is the usage of digital paint.) 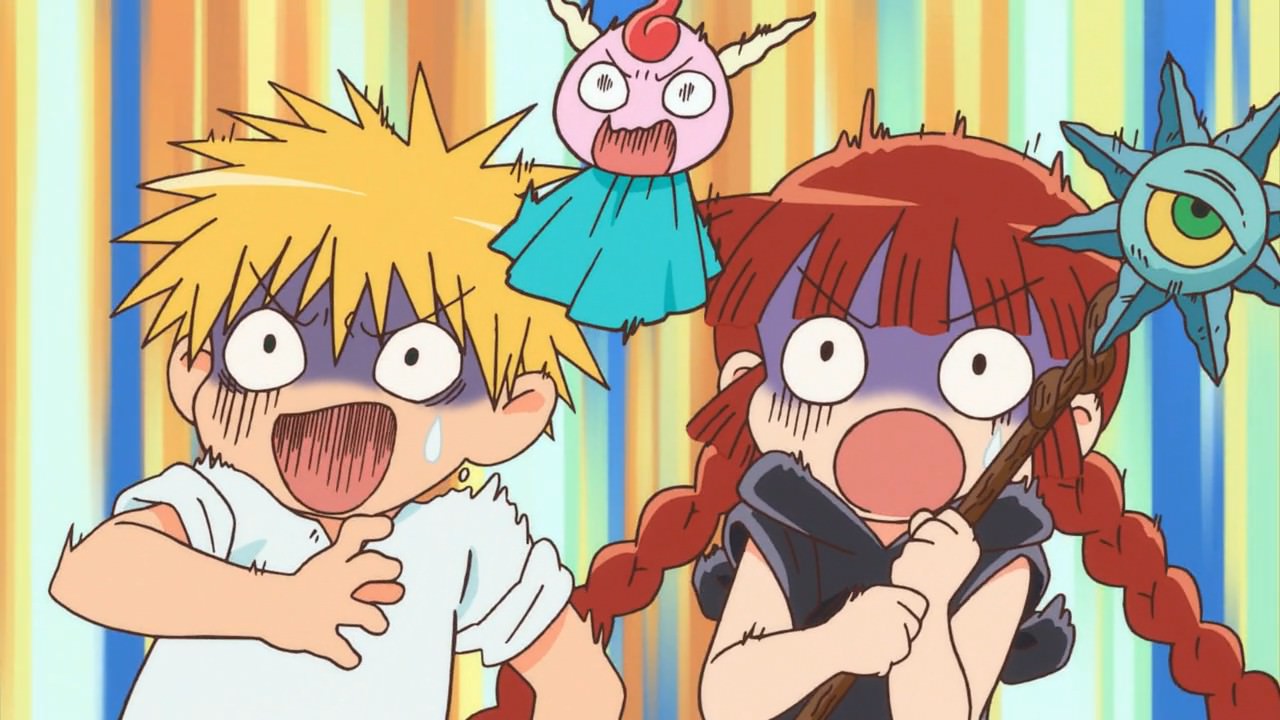 And yet, for a show like this, it's absolutely perfect. In fact there are even moments where characters and settings cleverly look pixelated, paying extra tribute to the games this series was influenced by. Outside of that, there's no grittiness, nothing moéfied, and nary a sight of hardcore detail to be found anywhere. Instead we're given the complete opposite of what Toei Animation did with Sailor Moon Crystal: a warming reminiscence of a bygone era of classic Japanese animation.

One can only imagine the big grins the voice actors have as they recite their lines. Ishigami brings together a combination of Shin-chan and that smart-aleck friend you had in elementary school to craft a hero that's funny, dumb, perverted, and filled with glee. On the opposite end of the spectrum, Kohara is simply adorable as Kukuri, who manages to pull off a voice that's innocent, lovey-dovey, and illegal levels of cuteness. As the wind spirit Gipple, Sakurai digs back to his role of Inugami from Gugure! Kokkuri-san to deliver a side-slapping performance, especially when he reacts horribly to every RPG cliché that occurs in the show. 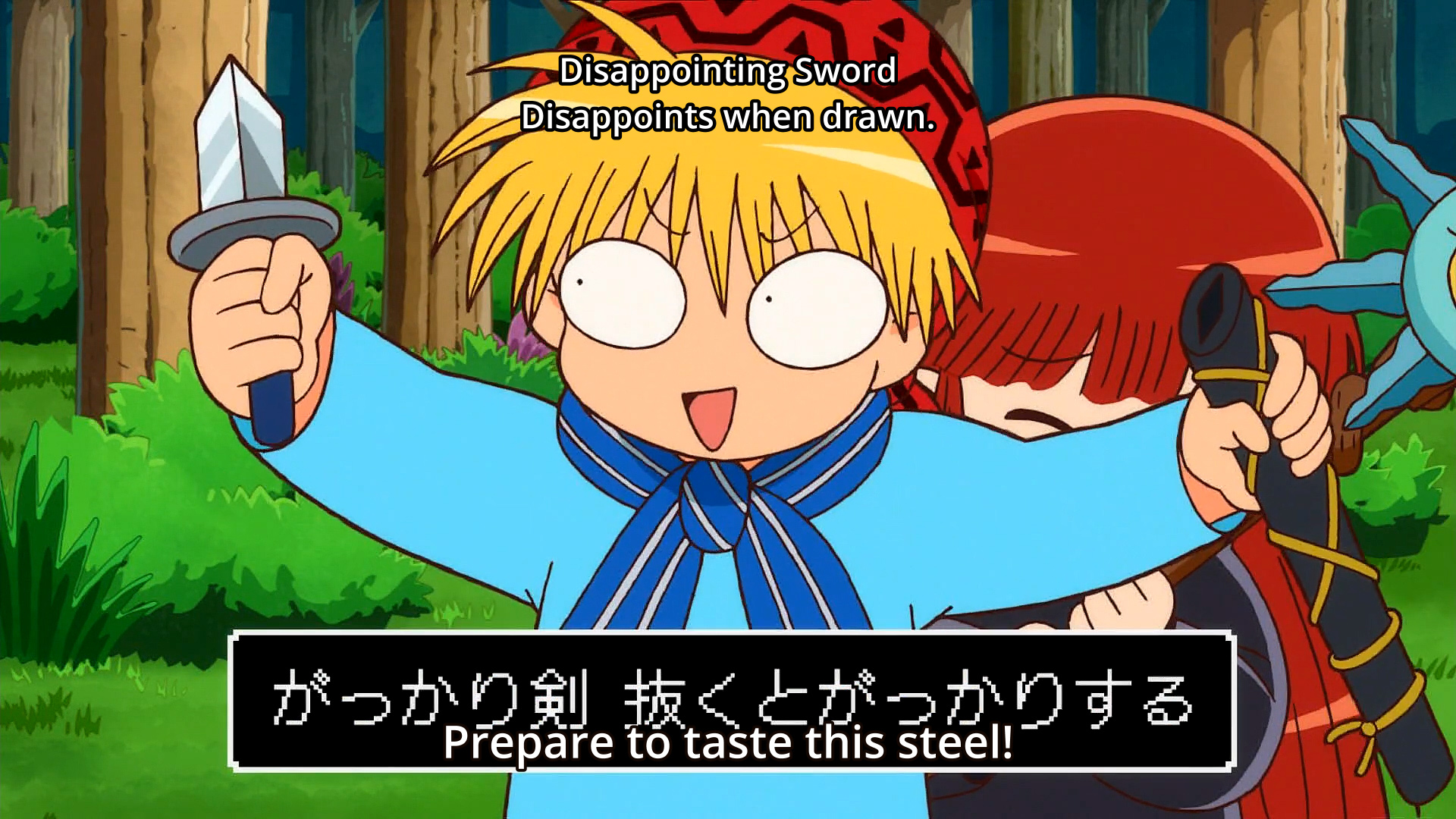 TECHNOBOYS PULCRAFT GREEN-FUND have crafted a score that fits perfectly with the world surrounding Nike and Kukuri. The usage of battle music and comedic jams both elevate the action taking place on-screen, paying strong homage to the works of Nobuo Uematsu. Opening theme "Trip Trip Trip" by ORESAMA sets up the tone for the fun and adventure that awaits viewers, bringing forth a feeling of joy and wonderment. Assisting the show's score composers, Bonjour Suzuki beautifully captures Kukuri's puppy love mentality with the end theme "Round&Round&Round," thanks in part to her cutesy vocals and the backing band's 80s pop sound.

Magical Circle Guru-Guru is everything an RPG-inspired comedy should be, and the fact it took 25 years to reach our shores should be deemed a criminal offense. Funny as hell, often sweet, and filled with wonderful nods to classic gaming, the adventure of Nike and Kukuri is one that any person would dream to be a part of. In laymen's terms: this is one anime that deserves to be called a classic in every sense of the word. Now let's hope our heroes actually make it to the Devil King, unlike its previous animated incarnations.

Magical Circle Guru-Guru can be viewed on Crunchyroll and VRV. Episodes 1-9 were observed for this review. Promotional consideration provided by Crunchyroll.

Background Noise: american dream by LCD Soundsystem - After a quick breakup and revival, the Talking Heads of the 21st century are back with their fourth album. James Murphy brings the strange-yet-catchy vibes to full force, especially in the lengthy "How Do You Sleep?" and the synth-heavy title track. Disco may be long dead, but LCD Soundsystem have managed to keep those mirror balls nice and shiny for all to dance under. (Although to be frank, I'm pretty sure even Murphy would keep a hairy-legged old man from doing his Kita Kita dance in the club.)