HomeAnime"Haikyū!!" Spikes It In For The Game-Winning Point

"Haikyū!!" Spikes It In For The Game-Winning Point 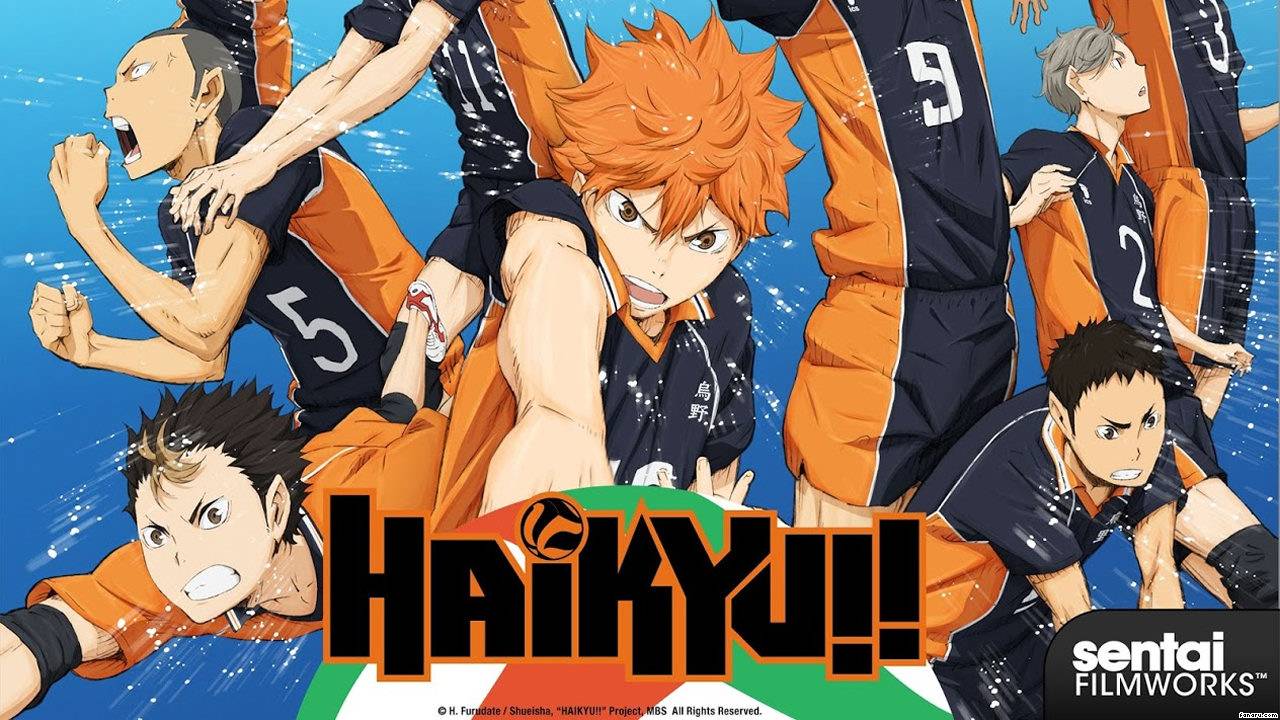 "Haikyū!!" Spikes It In For The Game-Winning Point

I've never been one for sports-based anime series. In fact the only one I remember watching for a good amount of time was The Prince of Tennis, although I grew tired of watching its protagonist Ryoma act like an egotistical jerk to everyone around him. (I also gave the football anime Eyeshield 21 a shot, but its dub made it unwatchable!) It's for a similar reason why I was hesitant to watch Haikyū!!, despite it coming from the well-respected animation company Production I.G. After months of being bombarded with pics and fan art of the show on our Tumblr Dashboard thanks to a certain recurring No Borders No Race guest, I caved in and decided to give it a watch.

Thank the stars I did, because Haikyū!! is the finest sports show to come around since Friday Night Lights.

Based on the manga by Haruichi Furudate Haikyū!! follows Shoyo Hinata (Ayumu Murase) and Tobio Kageyama (Kaito Ishikawa), two former rivals now finding themselves on the same volleyball team. Hinata is the go-getter, the kind of player that gives it his all, whereas Kageyama is the arrogant type that has issue cooperating with his teammates. Forced to become allies the two players find a way to not only bond as teammates, but also good friends. With the help of the rest of the Karasuno High volleyball players Hinata and Kageyama strengthen their weaker points, as well as keep their specialities in-synch with one another. 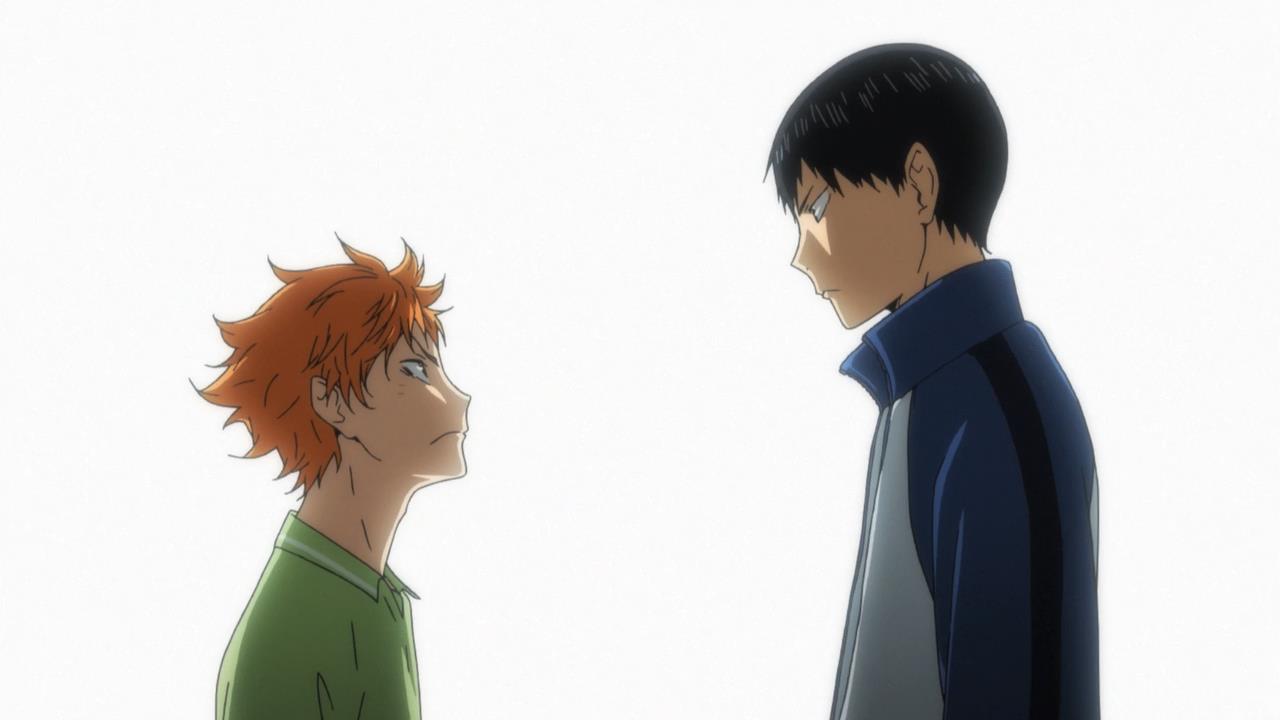 What I like about this series is it doesn't start its focal team as losers à la Bad News Bears. They're dorks, yes, but each player brings something unique to the table that can be seen as an advantage. Hinata is a strong spiker and can leap high despite his short stance, while Kageyama is a focused setter and can time his passes to the swing of one's arm. The same can be said about fellow spiker Tanaka (Yu Hayashi) and the libero Nishinoya (Nobuhiko Okamoto), whose energy and attitude also work towards the advantage for its teammates. Despite all this, it's how they learn to function as a team that matters, which leads me to what I love about the show.

When game time hits, Haikyū!! brings out its biggest strength. Throughout the series the characters of Karasuno High learn to collaborate with each other's best assets to put points on the board. With practice and quick changes in their tactics the players become more in-tune with what everyone brings to the table. It doesn't succeed all the time, as evident in the first few episodes, but what matters is that these players work together as a team instead of being just a group of talented individuals. The "no 'I' in 'team'" mentality is strong in this series, and it's done without being incredibly in-your-face about it. 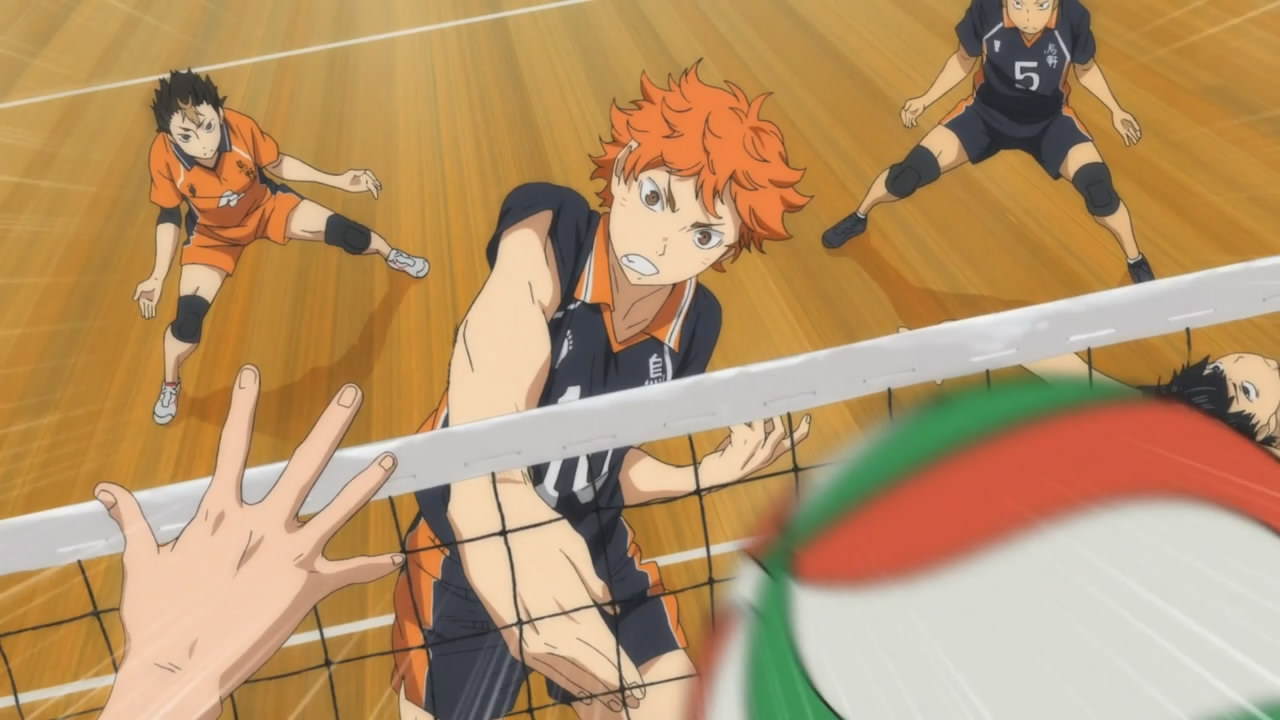 Hinata is also in line to being one of the most influential characters to grace any work of fiction in recent memory, as he can teach others the power of not giving up. In the first episode his junior-high team is far behind in points, yet as his fellow comrades are ready to wave the white flag he reminds them that they still haven't lost. This mentality is also apparent when Karasuno loses a practice game to rival high school Nekoma after two sets. "One more!" Hinata shouts, and even after playing another round -- along with almost every player nearly worn out -- he still wants to keep going. The word "quit" does not appear in this kid's vocabulary, and while he may be no Batman or Captain Laserbeam it's Hinata's style of positive thinking that can be inspiring to both viewers and those dreaming of sports glory somewhere in the future.

Production I.G. captures the energy of a volleyball game with both style and attitude, as the attention to detail in the hits, jumps, passes, and bumps are shown in a way that drags you deep into the match. Even seeing how the ball spins during play is quite impress to watch thanks to the quality of the drawings brought to the series, and when you look at how red Hinata's hand is after he spikes the ball you could swear you're feeling the same pain he does after smacking a point onto the board. The animation also does a fine job with showcasing the humor Haikyū!! contains, with a moment in Episode 2 involving a vice principal's toupee being just one of the many silly highlights this series can produce. 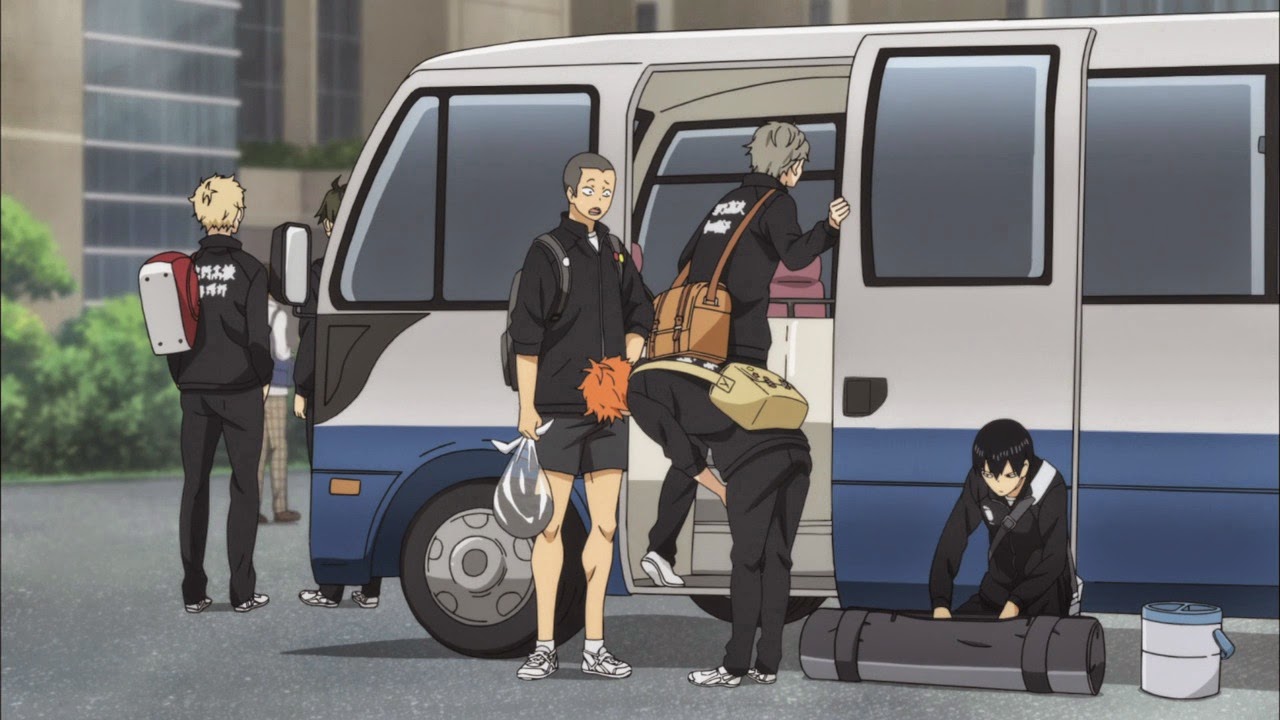 Props have to be given to the cast of the show, who help to capture the high energy that many of these characters are built up with. Murase's Hinata finely portrays a high school student with a hardworking attitude, complimenting well with Ishikawa's focused and emotionally caged-in persona that is Kageyama. Meanwhile Hayashi can be as much as a scene-stealer as his character Tanaka is an attention-grabber, with his badass exterior hiding a silly timid interior (especially when it comes to the team's female manager). Not a single miscast can be found in Karasuno team, not to mention any of the rivals they come across.

I don't often go out of my way to talk about a show's sound director, but Hiromi Kikuta did his homework when it came to bringing a realistic vibe to the volleyball court. How a sneaker squeaks on the floor, the echoing of the ball bouncing back and forth, and the "thunk!" of a hard spike off a player's hand is presented in quite the realistic way. It sounds exactly how a game would go down in a gymnasium. Meanwhile the duo of Asami Tachibana and Yuuki Hayashi create a wonderful musical score that compliments the intensity of a game, the subtleness of a quiet night after the end of practice, and the focused mentality of our players as they're about to hit the court. 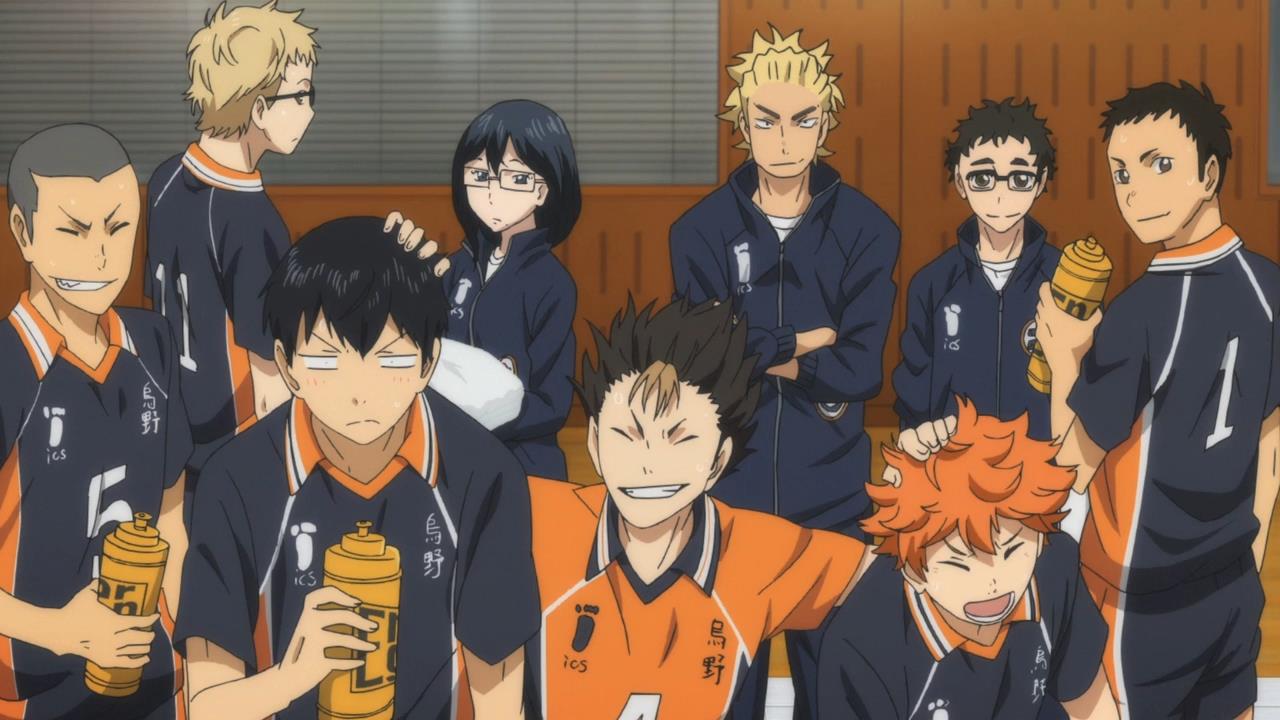 Above all what makes Haikyū!! succeed is the fact that it teaches the importance of teamwork without feeling like an after-school special. We all have been submitted to films, TV series, and awful Hallmark Channel specials that try to convey a message of working together, only for it to be drowned out by pure sappiness. Haikyū!!, on the other hand, would rather show off what it means to be a team while having a fun, positive, and lighthearted tone. There are touching moments, especially when you watch Hinata and Kageyama become closer friends the more they trust one another, but the series never forgets to be as comical as it is informative. It's this important factor that not only makes Haikyū!! one of the best sports anime series to date, but also one of the brightest examples of doing a sports serial in general.

To all the coaches out there: if you are looking for a show that will teach your players about victory, defeat, and team synergy, then Haikyū!! is your best bet. Even if volleyball isn't your kind of sport, this series will keep your attention thanks to its likable characters, standout humor, and some pretty exciting game plays. If there's one thing we can learn from this anime, it's this: what makes a great team isn't how many games are won, but rather how much perseverance the players have to keep on going, even if the score isn't in their favor. It's a lesson like this that makes Haikyū!! a great series that all ages can truly enjoy, from both an entertainment perspective and an educational one.

Haikyū!! can be viewed on Crunchyroll, Hulu, and the Anime Network. It has been licensed by Sentai Filmworks.