ANIME REVIEW | Dare To Be Stupid With "AHO-GIRL" 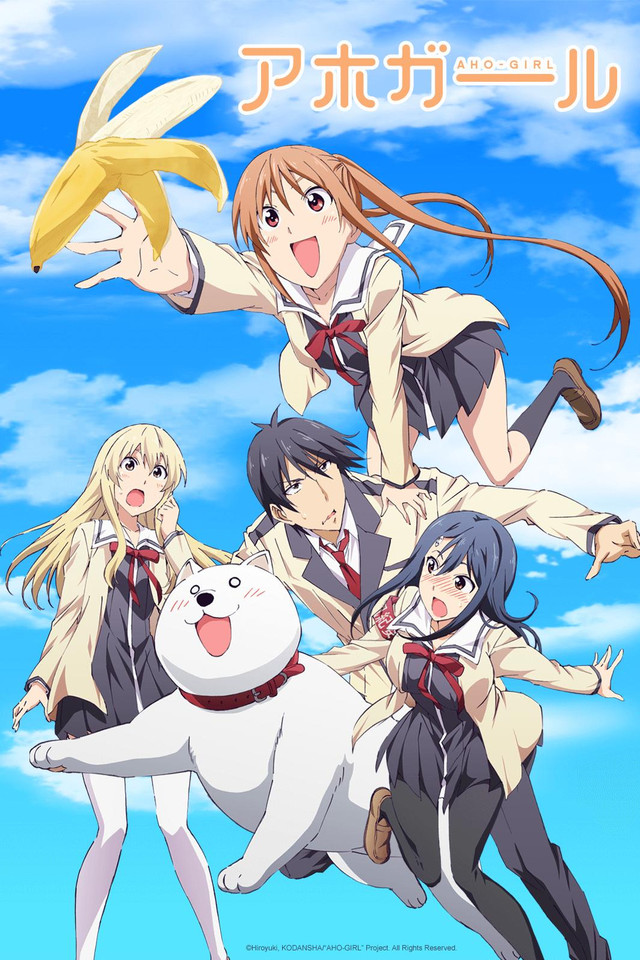 ANIME REVIEW | Dare To Be Stupid With "AHO-GIRL"

In the realm of fiction, we've seen our share of twits, nitwits, dummies, dumbasses, and morons. Some arrive in the form of the sidekick or side character, like Baldrick in BlackAdder or Mihoshi in Tenchi Muyo! Others take hold of the spotlight, like Lloyd & Harry in Dumb and Dumber or the main cast of Tropic Thunder. Then you have banana connoisseur Yoshiko Hanabatake (Aoi Yūki), whose level of idiocy is not only off the charts, but becomes contagious to almost everyone around her. With that you have AHO-GIRL, the tale of the biggest idiot in fiction.

Based on the manga by Hiroyuki, AHO-GIRL is mainly about how stupid Yoshiko can be, with her neighbor Akuru Akutsu (Tomokazu Sugita) baring the blunt of her dumbness. Her mother Yoshie (Yoko Hikasa) is nearly just as bad, trying to push Akuru to date her daughter in order to avoid a horrible fate for her flesh & blood. Not even her classmate Sayaka (Sayaka Harada) and well-endowed student council president Fuki (Sumire Uesaka) is safe from the moronic mass that Yoshiko tosses their way. And every week, this dummy finds a way to raise the bar in the art of the derp. 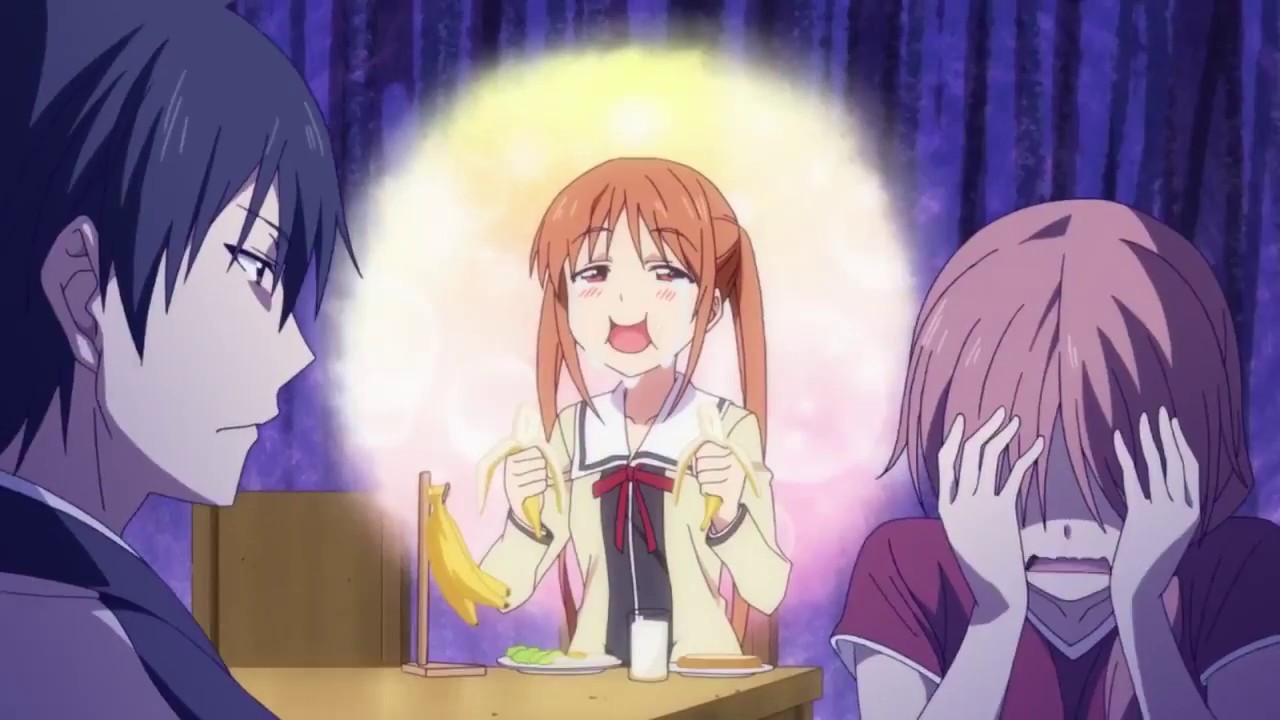 Each 12-minute episode is split up into 3-4 short segments, presenting its viewers with a small slice of Yoshiko's life. She plays with neighborhood kids when she needs to study, rides a giant white dog, and attempts to grope Fuki when she gets frustrated by her chest size. On occasion Akuru puts Yoshiko in her place, throwing her across the room or giving her a well-deserved German Suplex to the shock of his fellow classmates. And yet, even when she finds herself knocked out by the person she considers her close friend, Yoshiko jumps back into her absurd way of life.

For a show that doesn't have much of a premise, AHO-GIRL gets a lot of mileage. I can't really describe it without visual aids, but it's like this anime's main focus is a savant of stupidity. When you think she won't stoop lower than she already has, Yoshiko appears with shovel in hand and starts digging deeper. It's because of this "talent" that keeps this series going full speed ahead with moronic brilliance. 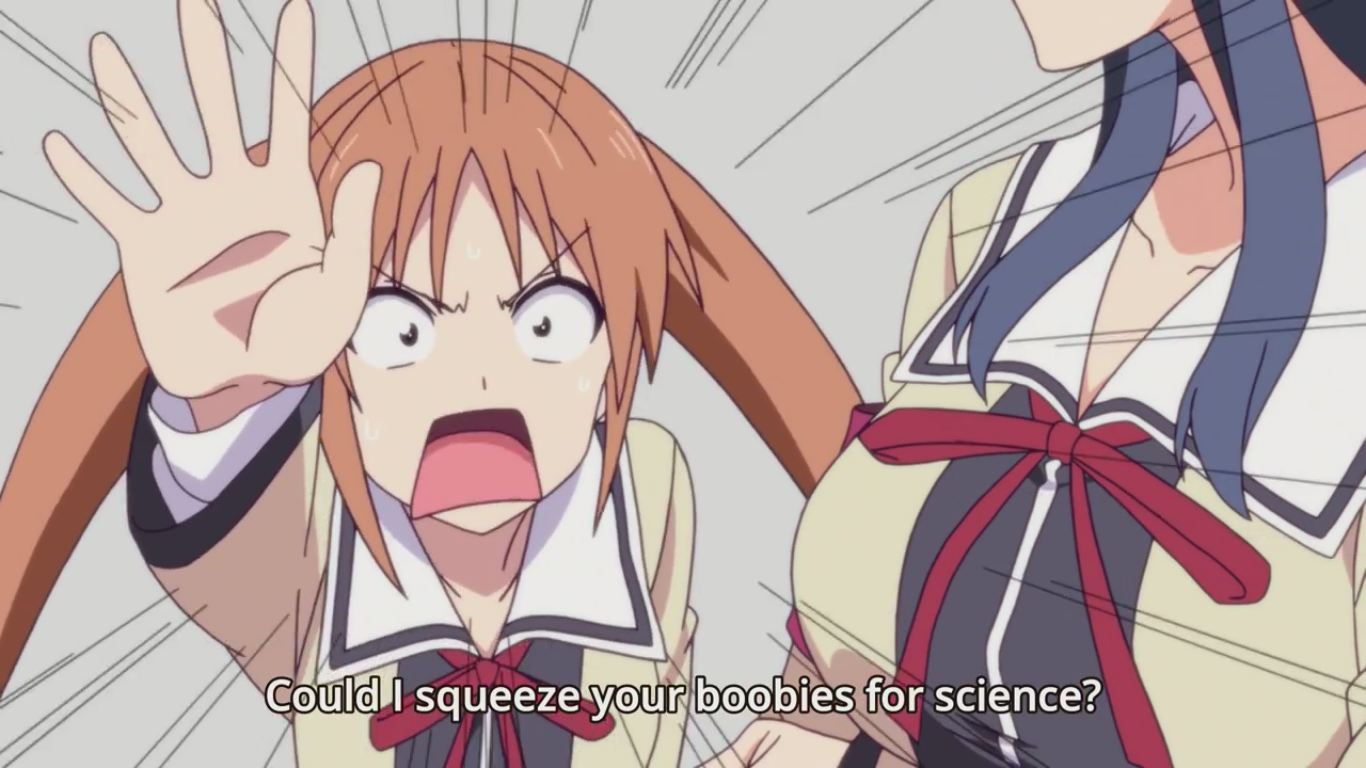 There are the generic episode premises like the school trip and fan-service-filled beach ones, but it's seeing Yoshiko act the way she does that keeps these dried-up plotlines moist with hilarity. Watching her bury Fuki in the sand and giving her both a flat chest and a two-story dong is a sight that demands to be seen by viewers everywhere. Akuru's little sister Ruri (Sayaka Senbong) also plays a big role in the comedy, with her constant stupidity arriving despite the fact she tries hard to study. When Yoshiko arrives to try to lift her spirits, Ruri gets dragged down further into the dense cesspool with hilarious punchlines in tow.

Perhaps it's a good thing that AHO-GIRL runs half as long as most the anime currently airing. I can imagine that the joke about Yoshiko's thickheadedness would run a bit too long if it was a normal half-hour series. Instead the series is presented in its condensed form, which gives both the material and viewers a chance to breathe in-between gags. And trust me: you'll need a good Lamaze breathing session after an episode is over. 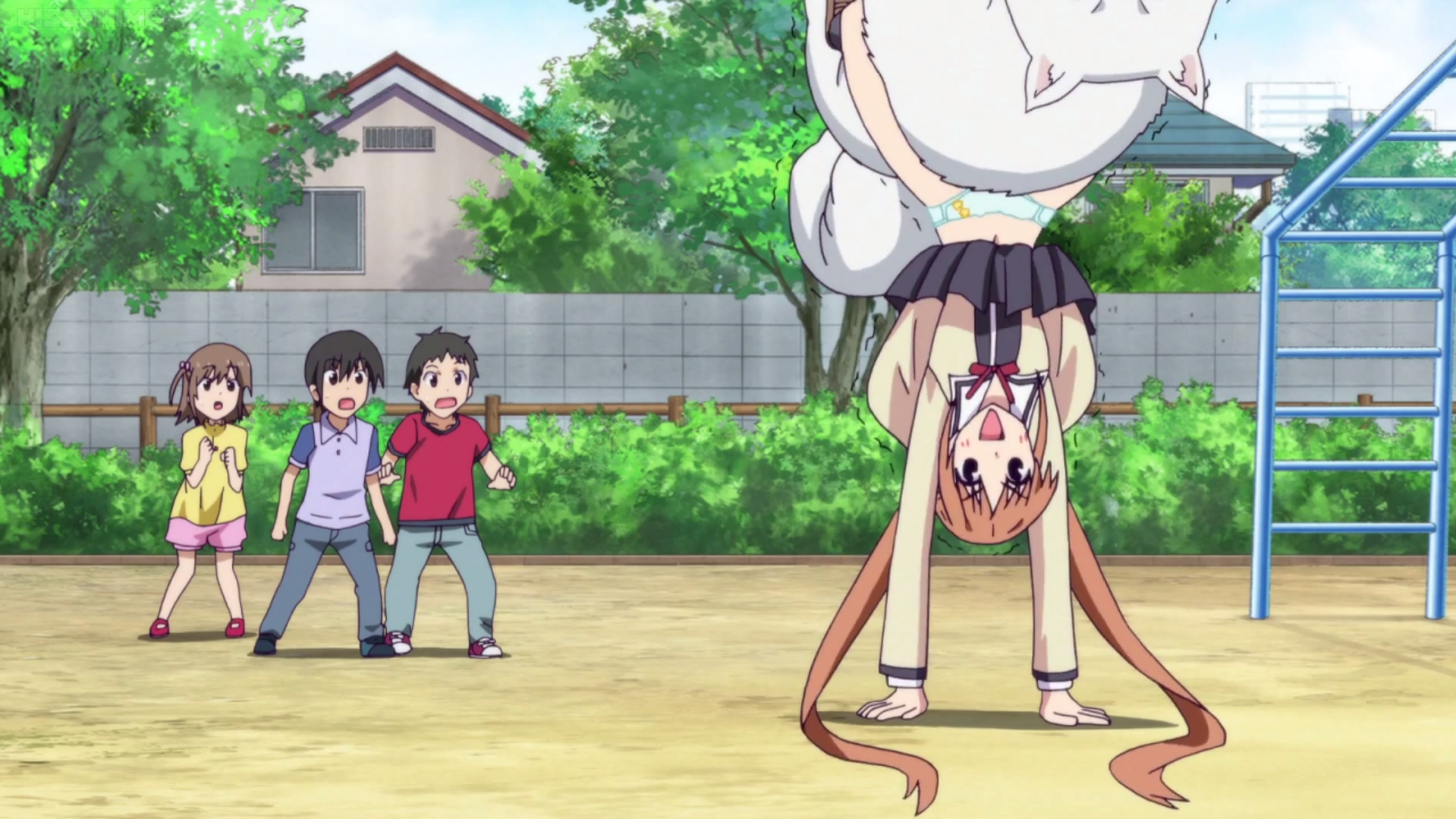 Animated by Diomedéa (Fuuka, Squid Girl), the series showcases strong jabs when some of the more physical-based comedy is presented. Even though the character designs can be generic, it's the facial expressions of Yoshiko and Akuru that present themselves with some goofy originality. One of the animation's biggest highlights involves Yoshiko unwittingly racing a cyclist on her dog, which is presented in an Initial D-styled manga. It's shockingly action-packed, with the dumb girl blissfully enjoying the ride on her giant pup as the motorcyclist gets angrier over her speed.

Speaking of shocking, to hear Aoi Yūki go from being a sadistic German soldier last Winter to a big ole dummy made me do a double-take. Her take as Yoshiko has made me respect her craft, presenting a performance range that'll surely keep her earning voice-acting jobs for years to come. Sugita's Akuru has an Anthony Jeselnik charm to him, spouting out unexpected punchlines that'll leave your jaw dropping...before reverting to some form of laughter. Although she doesn't get enough screen time, Hikasa's Yoshie dishes out big laughs when she tries to put Akuru & her daughter together, using any sadistic means to get to that end game. 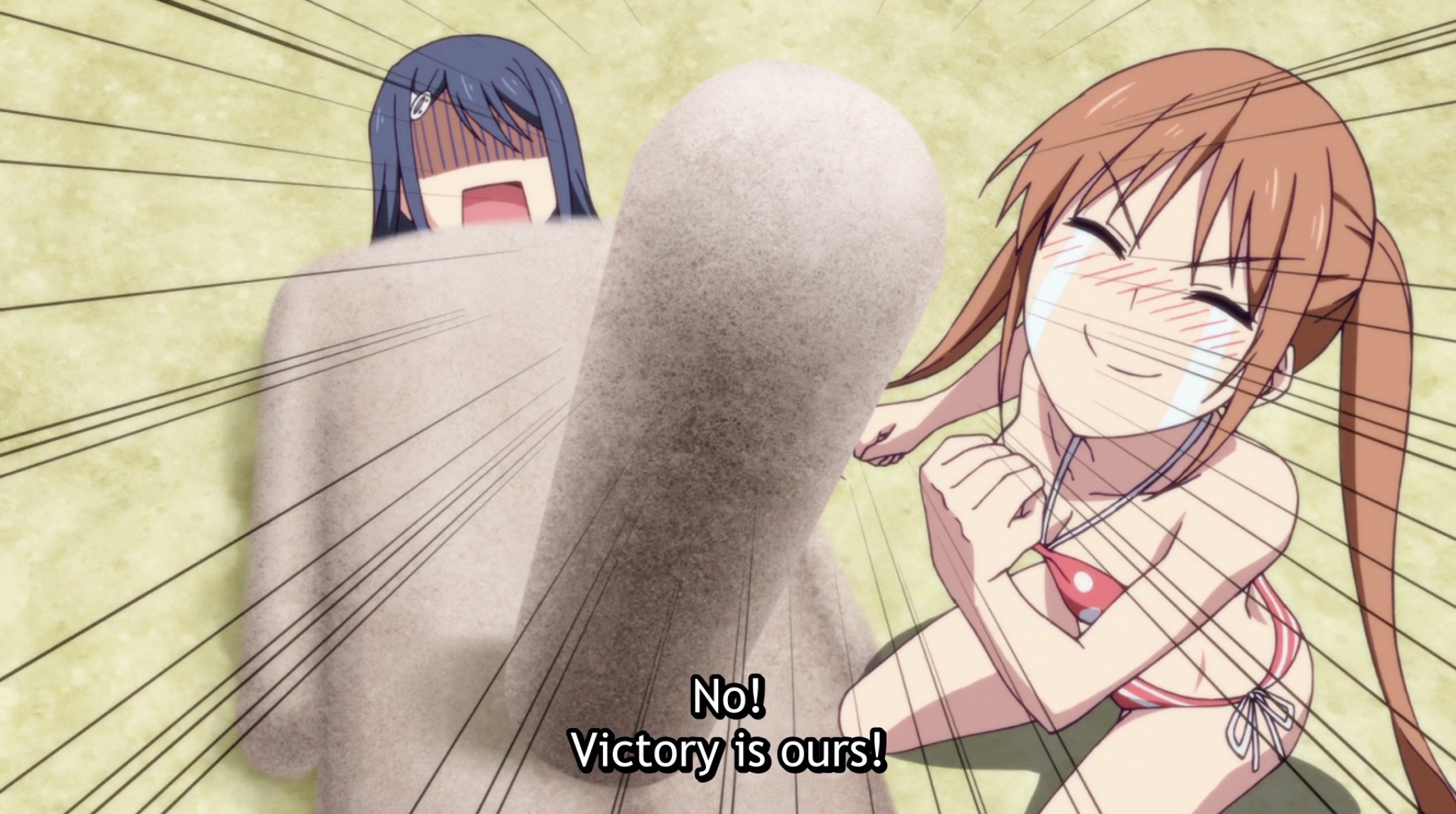 While Gin's score does a fine job with pumping an extra laugh, it's Angela's opening theme "Zenryoku Summer" that sets the dumb wheels in motion. Peppy, fast-paced, and off-the-wall, it encompasses the personality of Yoshiko to a T. You'll no doubt find yourself humming its catchy melody probably as the rest of 2017 finishes its run. Closing theme "Odore! Kyūkyoku Tetsugaku" by cast member Uesaka acts as a nice pop rock bookend that rolls with the anime's zaniness throughout its end credits.

AHO-GIRL is the right balance of dumb antics with clever punchlines. While its protagonist lacks any true brain cells, the people who write this show certainly do. If you are in need of a good laugh during a rough day, this is the remedy to turn that frown upside-down. In short, AHO-GIRL is one anime comedy worth grabbing your banana over.

AHO-GIRL can be viewed on Crunchyroll and VRV. Episodes 1-11 were observed for this review. Promotional consideration provided by Crunchyroll.

Background Music: The Essential "Weird Al" Yankovic - When you need zany music, you can't go wrong with the king of parody. This collection presents nearly 30 years of "Weird Al"'s best works, from his early works like "Polka at 45" and "One More Minute" to such recent merry melodies as "White & Nerdy" and "Trapped in the Drive-Thru." Of course, there's a certain anthem on here that was practically written for a character like Yoshiko...