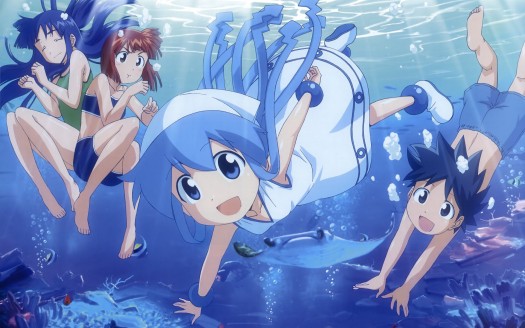 Last fall Squid Girl premiered to the world (at least the parts who had Crunchyroll), bringing in many laughs and cutesy scenarios featuring an underwater invader who's out to conquer the world that polluted her own. It was a no-brainer bringing it back for a second season, its formula fortunately unchanged.

Those who are unfamiliar with the series should do well to watch the first one, but let's go though a quick run-through: Squid Girl (or Ika-chan, as she will be referred to for the rest of the review) is pissed that humans keep polluting the oceans, so she comes to the shores of Japan to seek world domination. There she meets Eiko Aizawa, the manager of a yakisoba stand, who basically tells Ika-chan that conquering Earth isn't something that can be done overnight. After accidentally smashing a massive hole in the yakisoba stand Eiko forces Ika-chan to work at her restaurant in order to pay for damages. From there Ika-chan learns all about how the world works, and that humans aren't as bad as she perceived. 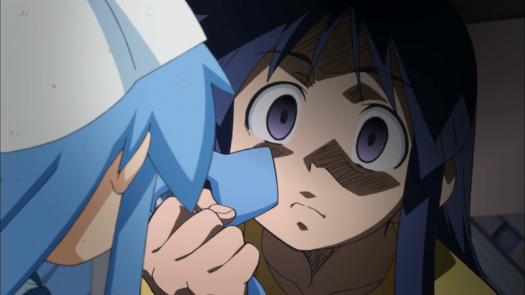 Like the first season each episode of Squid Girl is split into three mini-episodes, which -- for the most part -- don't follow any sort of canon. The first mini-episode deals with the fact that Ika-chan has just about lost all world-domination motivation, leaving her start catching up on her to-do list in order to rule the world. Unfortunately no one around her takes her actions seriously, leaving everyone to either get mad at her, or just dismiss it as being adorable. Seeing Ika-chan try her hardest to convince people she's a threat is nothing short of silly, with her frustrations adding onto the laughs.

The funniest story in the second season thus far appears in part three of episode two, in which the human characters are worried about their weight. Ika-chan reveals to them that she can change her mass at will via her bracelets. What happens after that revelation is nothing short of comedy gold, on-par with the writing in Sgt. Frog, another hilarious anime about invaders befriending humans. Storylines involving Ika-chan taking over a classroom, learning how to exercise and discovering the joys of cosplay also bring tons of laughs, enough to bring a smile to the saddest of faces. 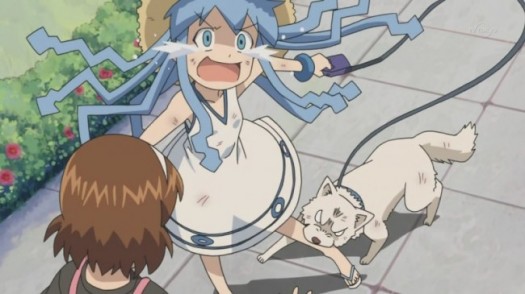 Although the humor in Squid Girl is well-written there is still something that continues to irk me about the series: the squid puns. I get that Ika-chan is a squid, and that she likes to play around with the Japanese vocabulary by adding "geso" and "ika" (tentacle and squid, respectfully) to almost every sentence she utters. However it gets kind of annoying by the end of the first mini-episode, and while it helps that voice actress Hisako Kanemoto gives Ika-chan such an adorable voice the puns still need to be cut down. It doesn't get Howard The Duck bad, but it's still miffs me in a mind-numbing way. (The English dub version, with Christine Marie Cabanos voicing Ika-chan, tackles the puns in a more subtle, and surprisingly cuter way.)

Despite the small annoyance season two of Squid Girl continues to be charming and funny, and while you might need to familiarize yourself with a tad bit of anime history before watching it this show has enough hilarity to entertain just about anyone who watches it. It might not be the smartest anime comedy on the block, but at least it's got enough silly antics that anyone can admit to finding quite joyful.

"Squid Girl" Season 2 can be viewed here on Crunchyroll.