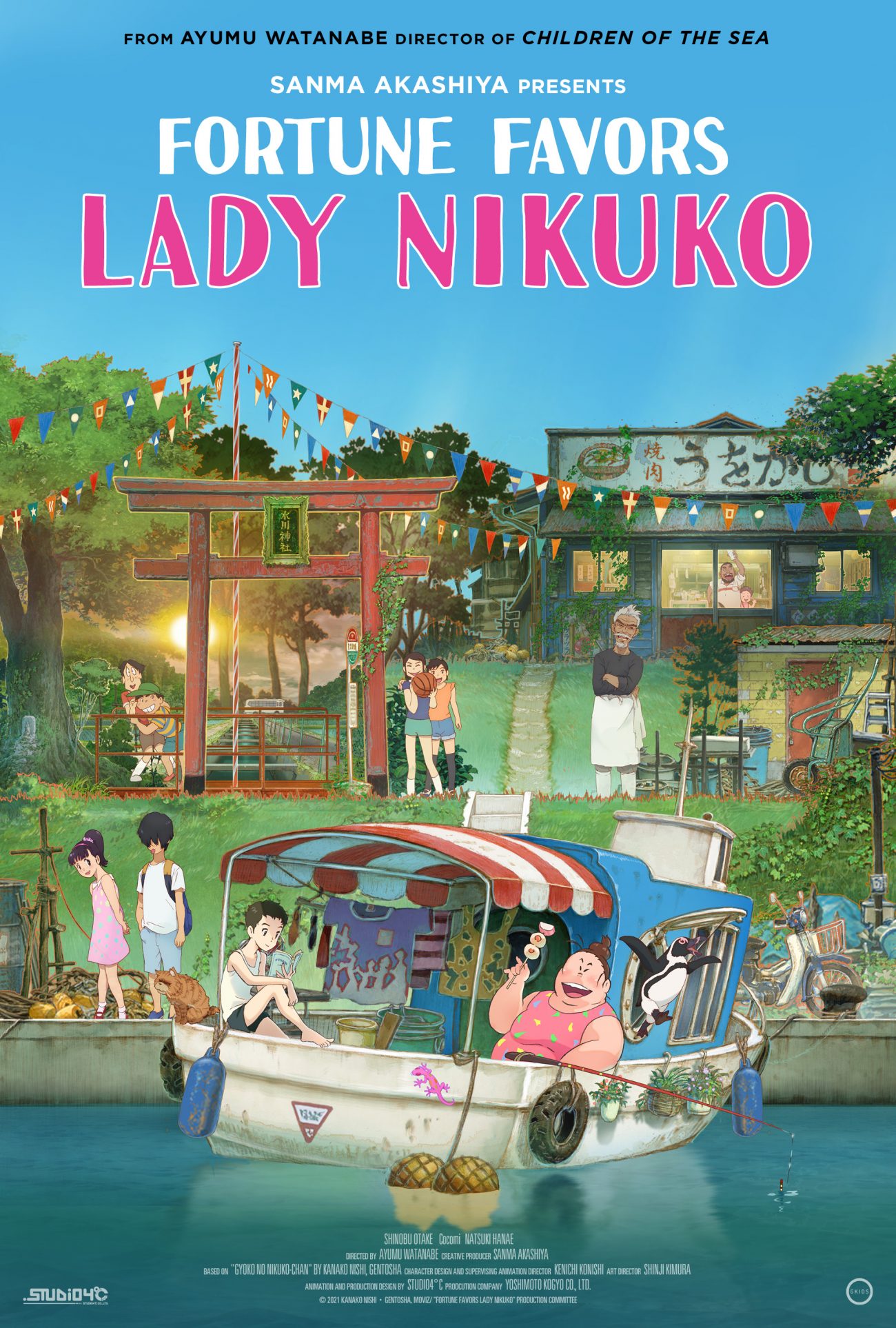 It’s often the kindest people that are the most gullible. Yet even when fate deals them a bad hand, those folks will still bet it all in hopes that the table’s bluffing. Win or lose, the best revenge to enact on rough patches of life is to keep on living well. That is the big lesson in the forefront of Fortune Favors Lady Nikuko, the latest film from director Ayumu Watanabe (After the Rain) and Studio 4ºC (MFKZ).

Based on the novel by Kanako Nishi, Forutne Favors Lady Nikuko focuses on its titular character (Shinobu Otake), a single mother to daughter Kikuko (Cocomi). She’s a big woman, whose loud personality makes her the talk of the small fisherman’s town. Yet her gentleness and kind heart has no bounds, a trait that Kikuko knows can be both her strongest and weakest point. The two take things day-by-day, as friendship conflicts, the discovery of boys, and a mysterious aspect of Nikuko’s past take the two through life’s strange-yet-relatable motions.

One thing this film does right is the presentation of Nikuko herself. At first, it would appear that her weight and personality are some sort of comic relief, which they do have their funny moments. But Nikuko is not a character meant to be laughed at, but rather with, as she tackles hardships with a big smile and plenty of food ready to consume. In a way, she’s very reminiscent of the late Louie Anderson’s performance of the endearing mother Christine in Baskets, one that looks to be funny at first before transforming into one of the best & brightest characters around.

Kikuko, on the other hand, brings a realistic portrayal of a girl on the verge of womanhood. She embraces her tomboyish ways, with hopes of never getting her period and having her body stays the same. But a new glimmer of life comes into her life when she gets closer to classmate Ninomiya (Natsuki Hanae), who brings forth some of the funniest and expressive facial expressions not seen since 2018’s Asobi Asobase. Nikuko’s daughter also deals with conflict with her friend Maria (Izumi Ishii), as the two middle schoolers deal with finding their place in school in ways that counter one another.

Plot-wise, Fortune Favors Lady Nikuko doesn’t have much of a narrative. It simply follows a mother and daughter living out their days as ordinary as they can be. Nikuko and Kikuko have contrasting ideas on what “ordinary” should entail, but at the same time they find themselves pushing onward with the things their current situation have on-hand. They do have out-of-the-ordinary adventures, with their trip to the aquarium bringing forth one of the funniest visuals involving a penguin.

This leads me to the strongest element of this film: its animation. While Watanabe and Studio 4ºC have brought plenty of beauty in Children of the Sea, Fortune Favors Lady Nikuko focuses more on being expressive than breathtaking. The way Kikuko and Ninomiya have a literal face-off, Nikuko running on a track during a sport’s day event, and the sizzling of meat on Sassan’s (Ikuhara Nakamura) grill are showcased with such care to the subjects on-screen. Although the visuals are not on the same level as their last collaboration, Watanabe and Studio 4ºC still find a way to bring a level of gorgeousness to the most ordinary of characters and scenery.

Another aspect that shines brightly is the film’s score. Composed by Takatsugu Muramatsu, the soundtrack borrows heavily from classic Celtic melodies. Yet despite it taking place in Japan, those sounds fit perfectly with the setting that Nikuko and Kikuko find themselves wrapped in. End theme “Taketen” by the singing dentists (Google it!) Greeeen meshes well with the mood of the film, on top of being one heck of a catchy song!

Fortune Favors Lady Nikuko is as slice-of-life as a movie can get. But it’s a beautiful slice-of-life, filled with personalities brimming with joy, sadness, and regret. Although it doesn’t resolve any big issues, Watanabe’s latest film does offer a bountiful of advice to those seeking a reason to keep walking on life’s mysterious path. Even if said path may be treacherous, Fortune Favors Lady Nikuko will find a way to tell its audience to keep their head up and their smiles bright.