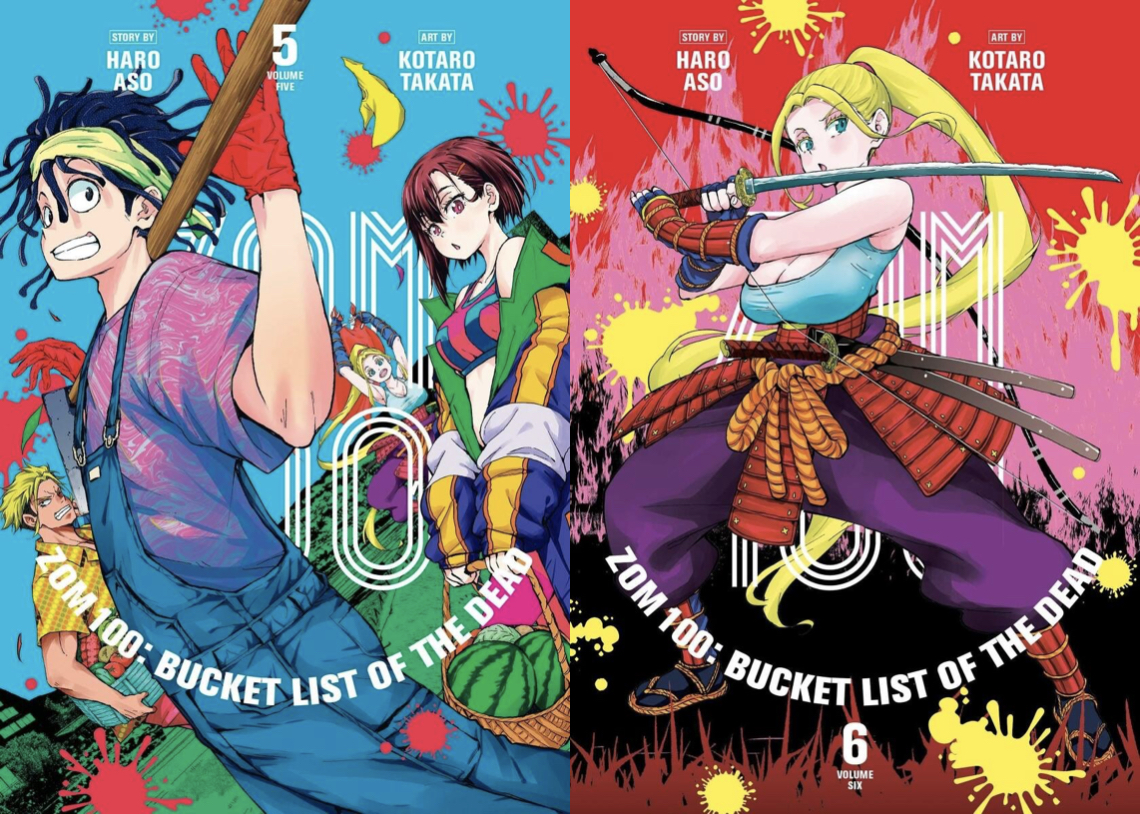 When you think of Akira Tendo of Zom 100: Bucket List of the Dead, you think “Everyman”. He is one of the finest representations of the average person in a zombified world since Simon Pegg was Shaun. The choices he makes in life aren’t always perfect, but they get him and his friends Shizuka, Kenichiro, and Beatrix out of many jams. But in Volume Five of Zom 100, Akira makes one of the most terrible judgment calls one could fathom! 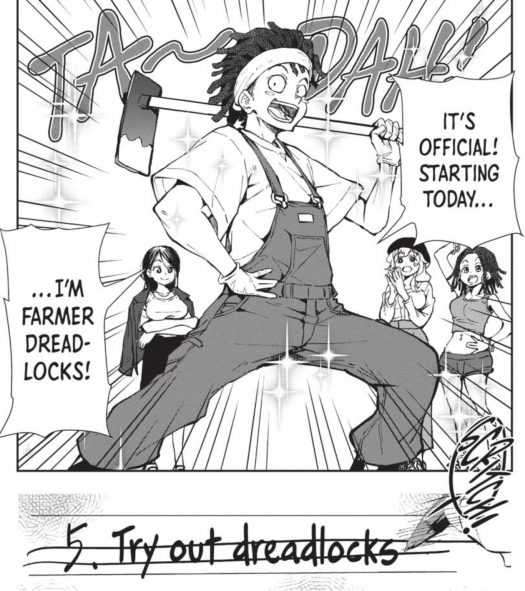 ...is he gonna get face tattoos and sell meth to the local yokels next?

Joking aside, we continue with the “Hometown of the Dead” narrative in this volume, as Akira reunites with his parents in the small village. With the zombies kept at bay, he and his friends start getting used to life working the fields and keeping the fertilizer fresh. It’s a situation that looks like a little slice of Heaven smack dab in the middle of Hell, as everyone finds peace and solitude in the countryside. However, that’s the problem with being in the middle of Hell: it’ll always find a way to sneak in to the quieter sides.

And for that, we have to thank Kanta Higurashi, a slacking ne’er-do-well who is jealous of Akira and his friends. He and his cronies decide that it’s time for the peaceful village to be burnt to the ground. To do that, Kanta revs up the bulldozer and lets the army of zombies roll in to cause chaos. With the citizens in panic and the farms in danger, Akira and his crew solider up and take it upon themselves to save everybody. 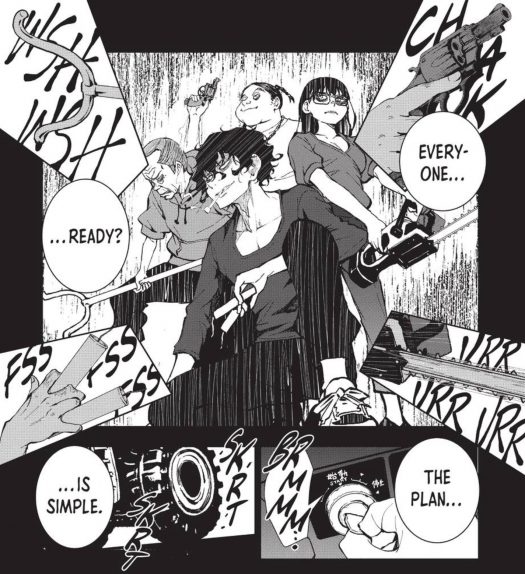 What this volume of Zom 100 does well is pace itself for the inevitable. We all knew that Akira’s parents weren’t always going to be safe in their location. I mean, we wish they could, but that’s not how zombie rules work sadly. But before the chaos, we see Akira having a much-needed chat with his dad, Shizuka become the village doctor, Kenichiro bond with a child whose parents were eaten, and Beatrix…um, still being a German otaku at heart. Hey, it ain’t all perfect, but the things that are endearing are endearing for good reason!

That’s when Kanta sets his plan in motion. He and three other rejects wreck havoc in ways that will make any reader’s blood boil with anger. Their tactics, their reasoning, and their will to cause mayhem showcase that they lack a single drop of good blood flowing through their body. Fortunately, Akira and the rest don’t rest on their laurels when all of this happens; they’ve come to fight! 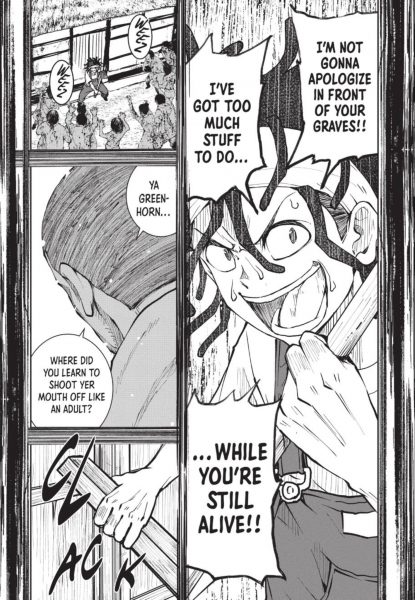 Yes, the means of fighting back feels somewhat superheroic; this is a manga, after all! But reading through the ways everyone protects the citizens is both adrenaline-pumping and endearing. Whether it’s Beatrix bringing a sword to a chainsaw fight or Kenichiro using a wonderfully shitty way to take out one of the rejects, Zom 100 showcases these moments with plenty of heart and soul-stopping intensity. It’s all done in such a way that’ll have you filled with hope that everyone will get out on top.

The arc’s conclusion arrives in the sixth volume, where everyone does they best to throw everything at Kanta and his filthy crewmates. His ultimatum regarding Akira’s father’s life forces the hand of the heartfelt son. However, a reveal about the dad’s health puts Kanta’s plan thankfully in doubt, until the front door swings open and the zombies march in. That’s when some outside-the-box thinking comes into play, with Akira delivering a plan that’s reminiscent of a certain Walking Dead plan (the Telltale game version, that is). 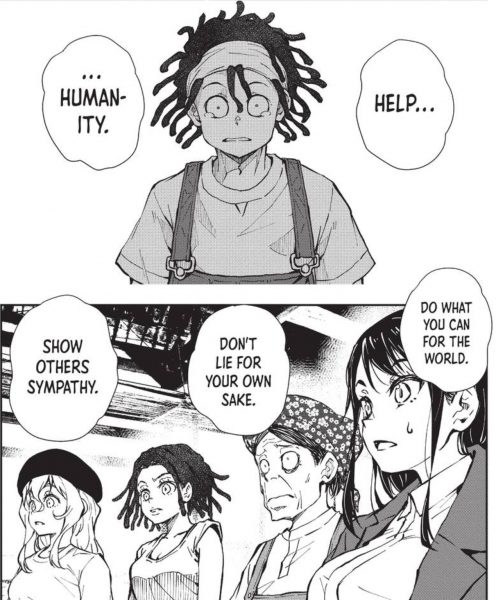 It all leads towards the main goal: saving the village. The citizens crank their heroic levels to 100, with Kanta and the others being taken out one by one. However, capturing Kanta is no longer in the cards when a zombie bites him. A face filled with regrets fills the villain, with Akira somewhat understanding where he’s coming from. After all, depending on one’s outlook on life, one can either become someone like Akira or — at worse — Kanta.

Rescuing the village leads Akira to come up with a new plan to discover a vaccine for the zombie illness. But before a cure can be found, his bucket list comes first. Wait, scratch that, it’s now everyone’s bucket list, as he, Shizuka, Beatrix, Kenichiro, and every villager adds whatever they’d like for it. It’s a moment that showcases the importance of going on while the world burns around ya. 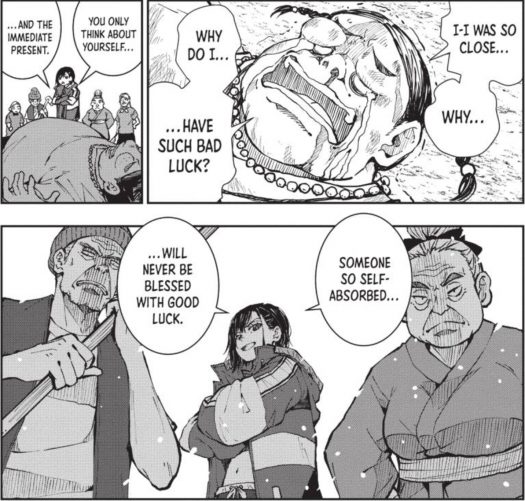 Zom 100: Bucket List of the Dead shows that so long as you’ve got your health and soul, you should keep marching onward. “Hometown of the Dead” delivered the importance of protecting what’s most important with excitement, comedy, and relatable drama. As Akira and his friends hit the road, their mission to find a cure becomes key. Of course, it doesn’t hurt to take a moment to frolic in nature as often as one can. Nevertheless, Zom 100’s latest volumes shows that the zombie genre still has plenty of life in it!