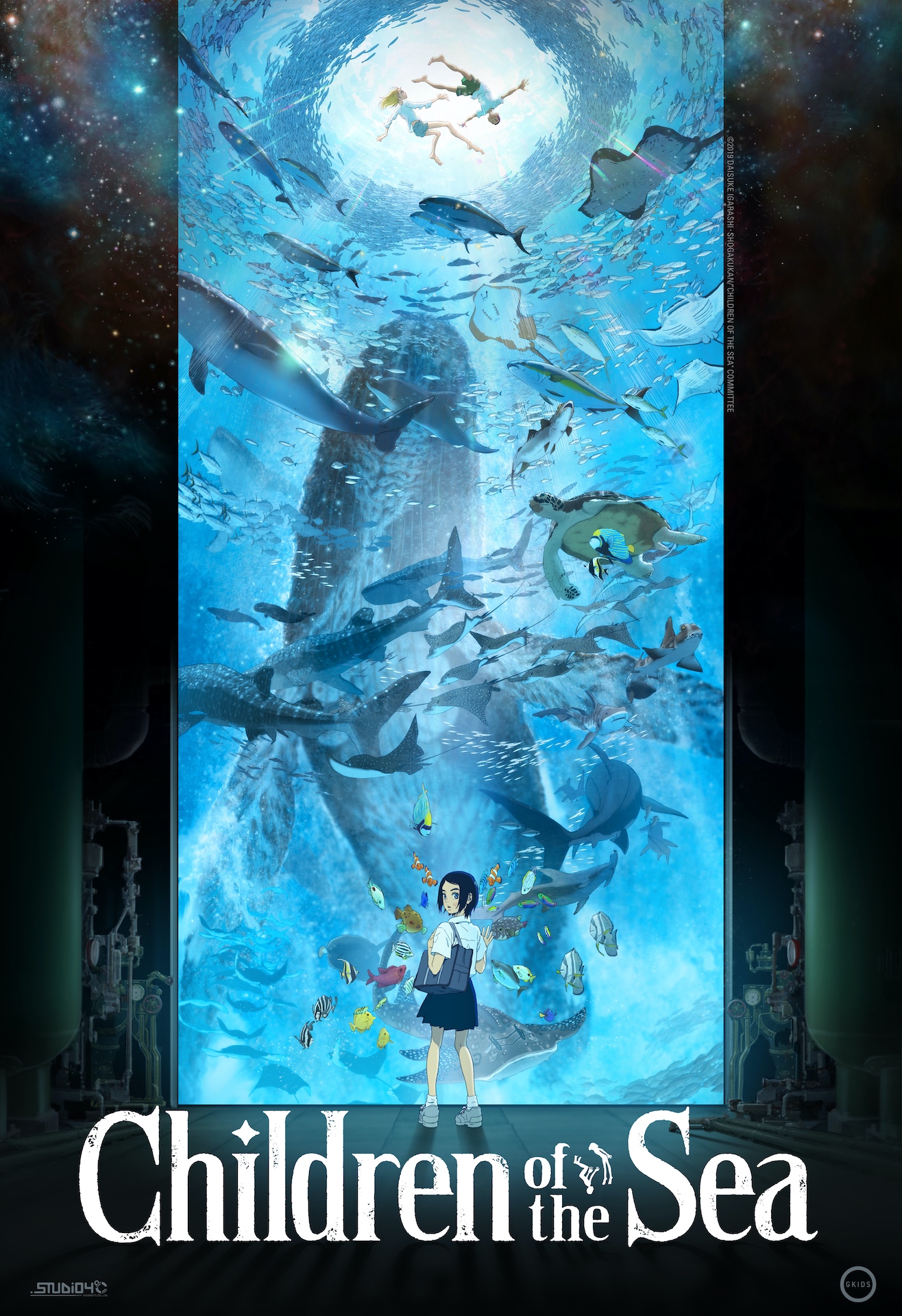 “I didn’t understand any of it.”

These words fly out of the mouth of Ruka (Mana Ashida) near the end of Ayumu Watanabe and Studio 4ºC’s 2019 film Children of the Sea. The character goes through a lot during her summer break, which begins after she’s kicked off her handball team. What follows is a whirlwind adventure with the two ocean-faring brothers Umi (Hiro Ishibashi) and Sora (Seishū Uragami). And yet, even through all that she bore witness to, she is left somewhat confused as to what had occurred. In a big way, I can honestly relate to her conundrum.

Raised by dugongs, Umi and Sora (the Japanese words for “sea” and “sky”) live an interesting life where they cannot be out of water for too long. As such, they take residency at the local aquarium, where Ruka’s father Masaaki (Goto Inagaki) works almost nonstop. Once Ruka befriends the two brothers, she is taken on a trip both literally and spiritually through the universe that the ocean holds. While all of this is going on, a strange occurrence happens all over the world, as marine life invade parts of the waters they normally don’t tread. One such creature is a massive humpback whale, who inches closer to Japan as the summer break winds down.

Both Umi and Sora are being studied, with the marine biologists speaking of a festival happening underwater very soon. The brothers are the key to finding the whereabouts of this event, as falling meteorites hint of its impending start. With the fish, whales, and other ocean-based animals start reacting to the strange happenings, Ruka and the two brothers seek out its source to bear witness to what could be the birth of a new world. And it’s here where things get both confusing and interesting.

An adaptation of Daisuke Igarashi’s manga, Children of the Sea is a tough fish to fry when it comes to its plot. The course of events change unexpectedly, like a no-named storm transforming into a hurricane. At first, it feels like a family-friendly romp about newfound friendships. However, I was not expecting for it to evolve into a Stephen Hawking-like trip through the origins of life and the galaxy! Although you won’t need a doctorate in marine biology and theoretical cosmology to fully enjoy this film, you certainly won’t be shunned for not knowing what’s going on.

Thankfully, while the story can be confusing, it’s the animation that will take any viewer’s breath away. Studio 4ºC blends both hand-drawn and CGI visuals together, crafting some vivid worlds and beautiful looking characters. How characters swim through the ocean is presented with such wonderful fluidity, demonstrating realistic movement with a hint of ballet-like grace. Where it shines the brightest is the film’s climax, as Ruka participates in what is seemingly the festival the marine biologists have been speaking of. It’s a type of beauty that takes full advantage of seeing a film like this on the big screen (especially an IMAX-styled theater), as it’ll engulf viewers in a celebration of light, sound, and motion.

As Igarashi was heavily-inspired by Hayao Miyazaki and his film My Neighbor Totoro, it’s a wonderful thing that Children of the Sea had the famed Studio Ghibli composer Joe Hisaishi at the helm. His compositions dance and delight alongside the animation, bringing forth some of the most powerful orchestrations you’ll hear all year. While some of the pieces can be a little simplistic, its usage at the right moments demonstrates the strong bond between the music and its accompanying visuals.

Children of the Sea is a very hard movie to explain, but it’s one that should be viewed at least once in your lifetime. Despite its plot being hard to comprehend, it’s the film’s animation and score that will stay with you long after the post-credits scene rolls. Yes, I may not have understood a good chunk of Children of the Sea, but the trip it took me on was certainly worth experiencing.