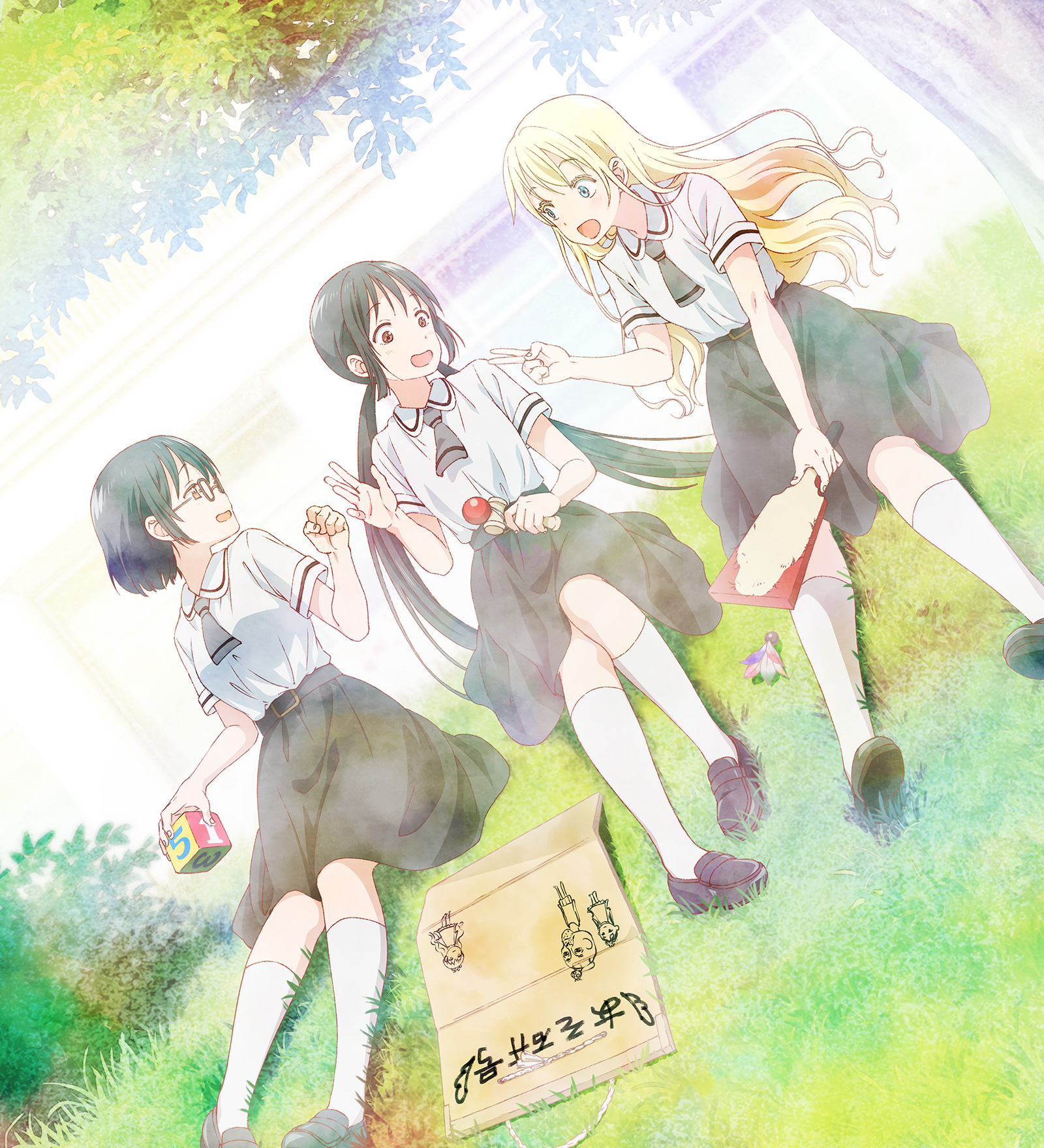 These days, anime can be bombarded with the whole Cute Girls Doing Cute Things genre. Sometimes it's done very well in such series as Laid-Back Camp and Love Lab; other times they can be rather dull and uninspired, as it was in Hyakko! or Slow Start. And then comes along a show like Asobi Asobase - workshop of fun - that not only rewrites the book on the CGDCT genre, but proceeds to use said book as toilet paper in a most horrifically hilarious way!

Based on the manga by Rin Suzukawa, Asobi Asobase focuses on a trio of friends who form the Pastimes Club, a simple get-together place where they can goof off and do as they please. One of the friends is Olivia (Rika Nagae), a Caucasian girl who was actually born & raised in Japan. The other two, Hanako (Hina Kino) and Kasumi (Konomi Kohara), take that opportunity to form the club in the hopes that Olivia can teach them English, despite her not knowing a single proper sentence. As the three friends bond together over fun games and past-times, the memories that are crafted through their escapades are bound to last a lifetime. 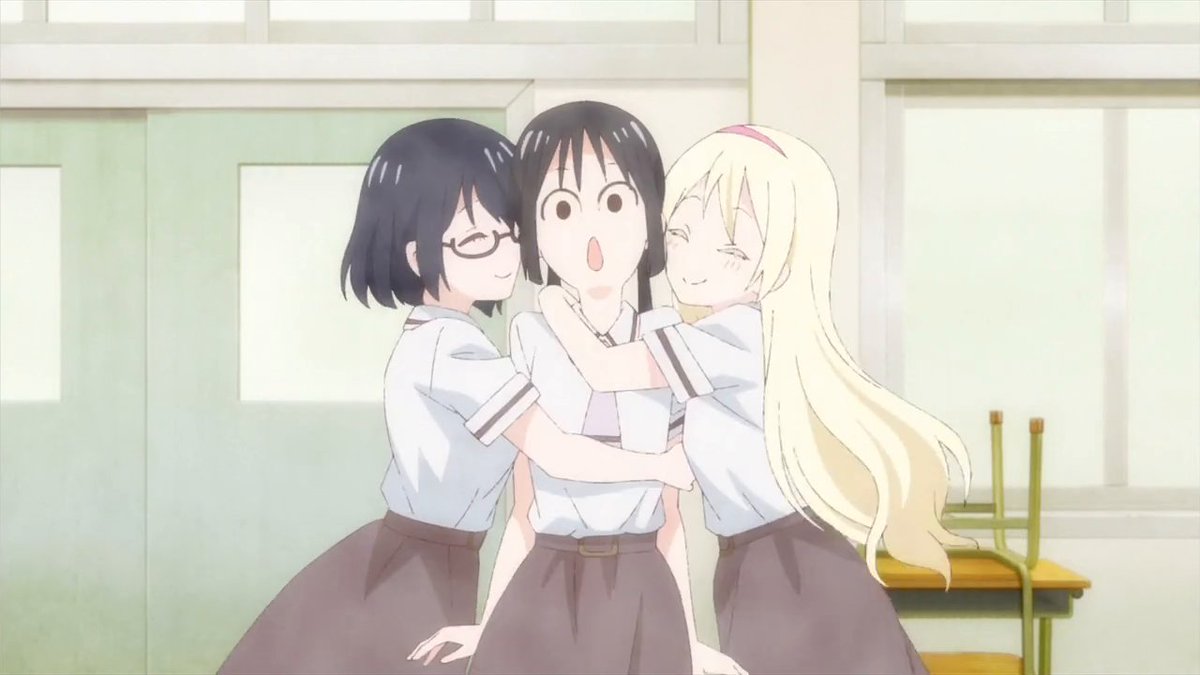 Reading through the premise, one would be forgiven for thinking it's another Cute Girls Doing Cute Things anime, and to be fair that's exactly what Asobi Asobase wants you to think at first. Even before airing, the promos and advertisements for this anime wanted its audience to think that they were in for a good, relaxing time. However, once you see that it's Lerche that's animating it, you quickly remember that this is the studio that's perfected the whole “looks can be deceiving” mantra with shows like Magical Girl Raising Project, School-Live!, and Assassination Classroom.

It's roughly two minutes into practically every episode when the curtain that's covering Asobi Asobase's true intentions is pulled off. There are no cute things being attempted by Olivia, Hanako, and Kasumi. Instead, they spend nearly every episode pulling off some of the dumbest shit a high school girl could imagine! From pushing simple time-wasting games to the extreme to even feigning ignorance when it comes to knowing a language, these three girls make it their mission to act as inhumanly dumb as possible. They even rope in their lovesick teacher Chisato (Ryōko Maekawa) into being their advisor after creating for her probably the worst kind of Twitter account imaginable. And it is funny as hell! 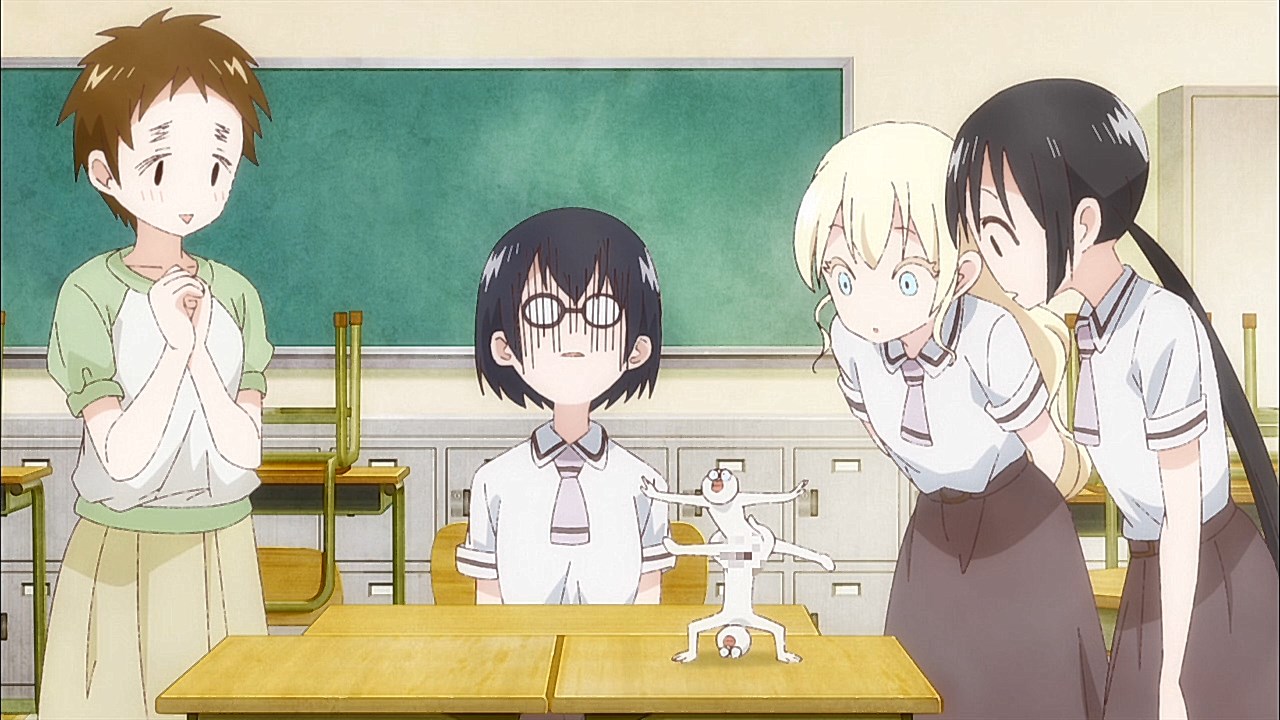 Merely listing off every snicker-inducing instance would take hours to go through, but many highlights in the show involve some strange pool party shenanigans, comparing armpit smells, trying to figure out if a student in their all-girls academy is really a cross-dressing boy, and playing a Pokémon GO knockoff that involves finding real-life bacteria in their vicinity. Also partaking in the craziness is Hanako's live-in helper Maeda (Ryōtarō Okiayu), who has one of the most amazing talents that cannot be spoiled in this review. And as the storylines progress, the members of the Pastimers Club somehow reinvent the concept of "dick moves" on every occasion.

I was often reminded by the 2007 anime Sayonara Zetubou-Sensei when it came Asobi Asobase's style of humor. Both series go down a similar dark level of comedy, reaching certain heights when it comes to character reactions and their snarky attitudes. You watch with anticipation as these three cute schoolgirls act sweetly throughout each episode's first couple of moments, as if you had mistakenly started watching a different series. In reality, it's waiting for that shoe to drop so the insanity that engulfs this show's spirit can take over that makes watching this anime a fun treat each week. And when the crazy starts up, it never once slows down for the sake of a breather. 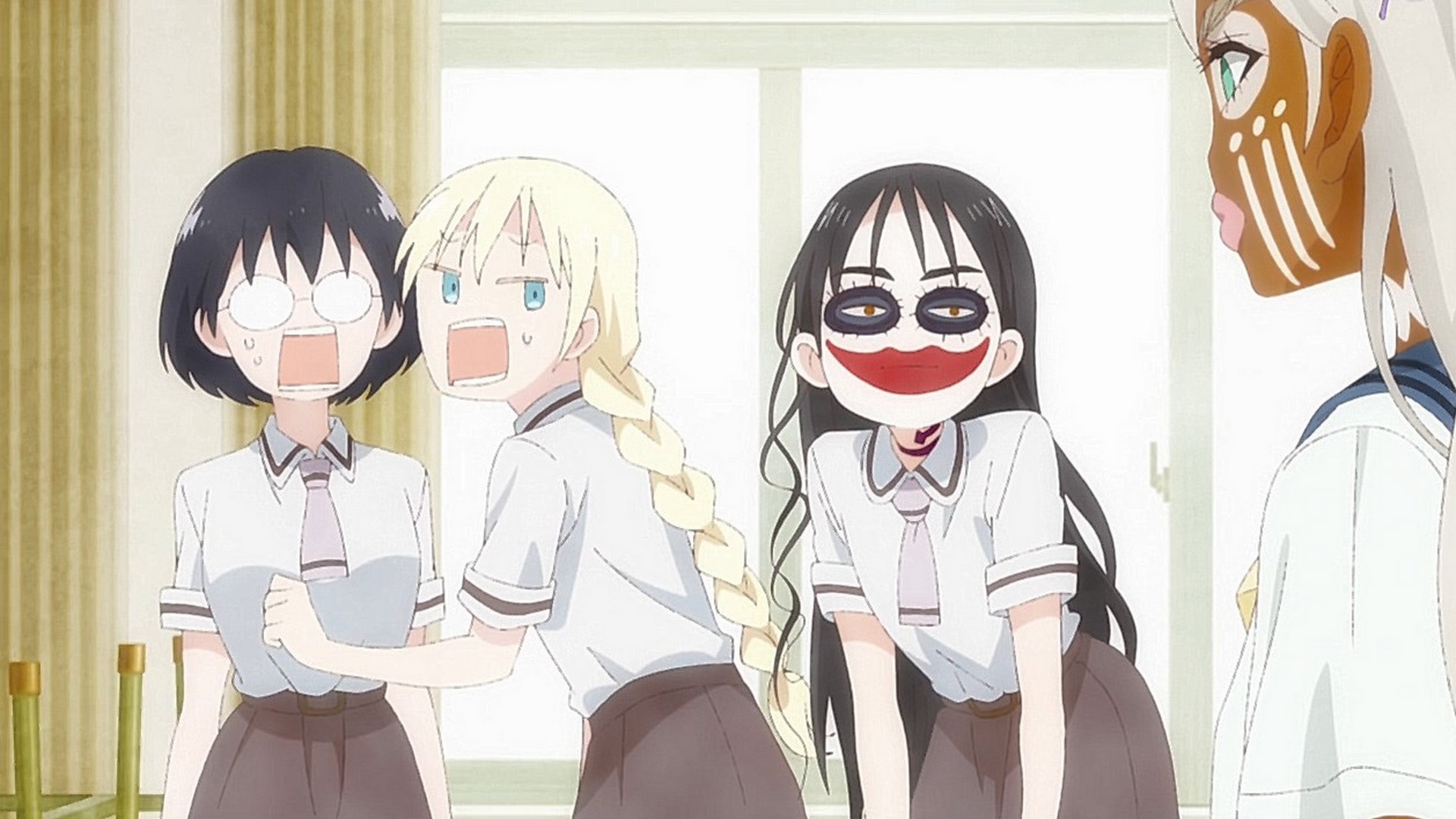 What Asobi Asobase does right is keep the mean-spiritedness going without ever stopping. Nothing is held back, in the same way that has made a show like South Park so iconic. Everyone is the butt of the joke, and -- as such -- nobody should actually be offended by it. It's meant to just be laughed at, as the trio of Hanako, Olivia, and Kasumi are supposed to be portrayed as the little shitbags that they are. Because of this, the audience knows right from the get-go that anything they say and do are meant to showcase how stupid their mentality is, almost in the same vein as Beavis and Butt-Head were in the 90s.

Lerche reaches levels of Uncanny Valley with these classmates, especially when they get upset or find themselves experiencing bodily harm. In one moment, the girls are cute as a button; and the next frame they look like something Junji Ito conjured up in one of his horrific nightmares. It's also surprising how fantastically animated their actions are, be it playing one of the most torturous boards games around to pushing a wagon to see up the skirt of a fellow classmate. And when you see these characters pushed to the limits of insanity, that's when they start making faces that even rival the likes of KonoSuba or Mr. Osomatsu. 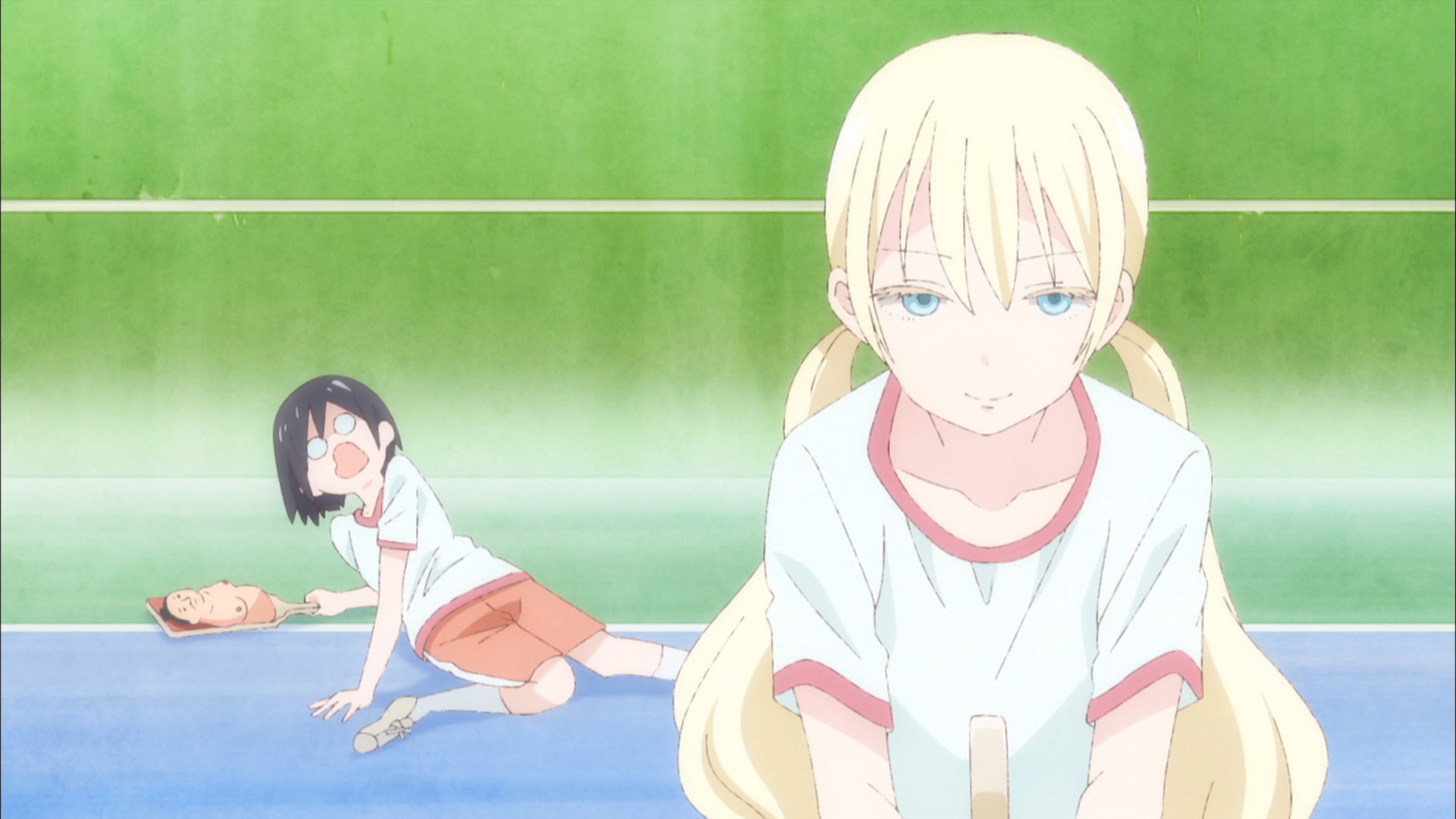 Nothing but praise should be showered for the voice cast, with Nagae's Olivia presenting a dimwitted attitude with a slice of adorability. Kohara's Kasumi plays coy at first, but her hidden weirdness demonstrates a plethora of dark and funny attitudes that make her character stand out. Whenever Okiayu arrives as Maeda, he delivers a level of class in his voice that hides his own terrible mannerisms. Perhaps the only sweet-hearted character of the show is Maekawa's Chisato, whose curiosity and warmness often sets herself up for a humorous downfall.

Lastly, there's Kino's portrayal of Hinako. Out of everyone in Asobi Asobase, this is one performance that shines the brightest throughout the series. The levels of cute, crazy, and horrifying that Kino throws at her character are the kind that truly pushes a role to be an actress's breakthrough moment. Like Rie Takahashi's Megumin or Aya Hirano's Haruhi Suzumiya, Hina Kino's take on Hinako reaches iconic levels, making her destined for voice-acting stardom in the near-future. 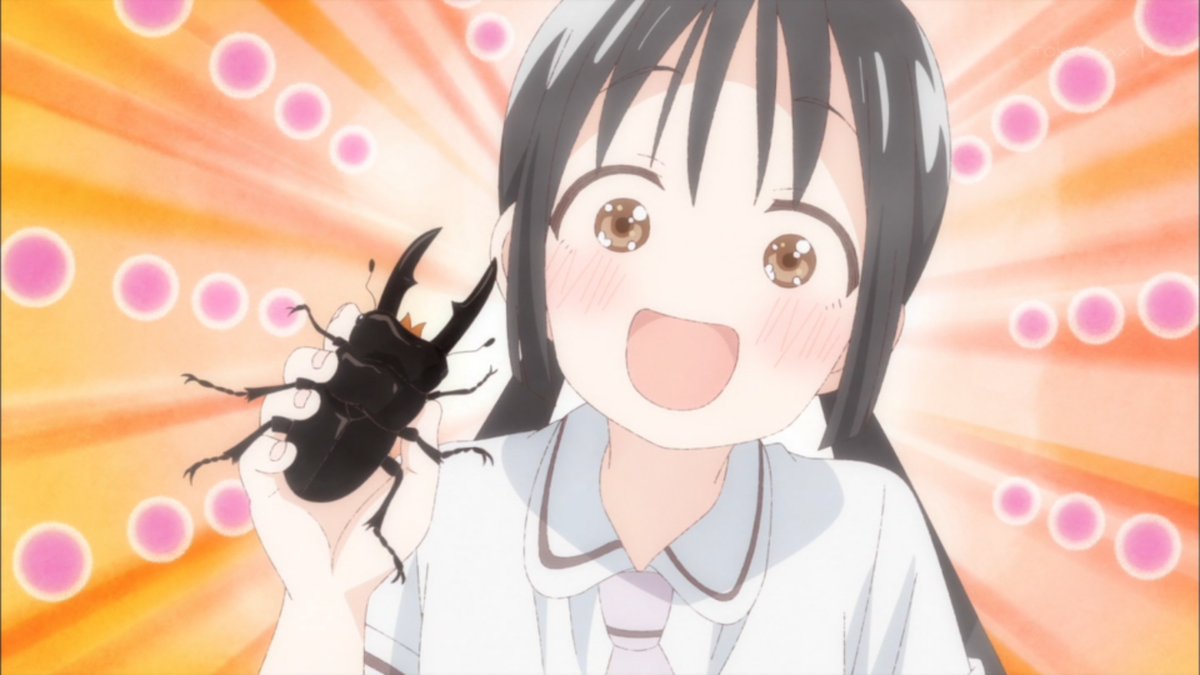 Masato Koda's (KonoSuba, Knight's & Magic) score works wonders for the craziness that's entailed in each episode. One moment, it's cute and fluffy; the next, it reaches dark and even death metal-ish during the most intense moments. Nagae, Kohara, and Kino contribute both the opening and ending themes, with the former's "Three Piece" being a cutesy, innocent song about friendship that pulls the wool over the eyes of its viewers every single time. However, it's the end theme "Inkya Impulse" that's bound to be one of this year's very best anisongs, with its Cannibal Corpse-like music backing the trio's Babymetal-inspired singing and screaming. (If you grab this single, I urge you to listen to the b-side, as it even tops this song in the death metal ranks.)

Asobi Asobase - workshop of fun - is this year's most unexpected comedic treat. Every episode has a shining moment that somehow tops the hilarity of the previous installment. Wonderfully offensive and straight-up clever, Asobi Asobase is what Pop Team Epic should've been: a gut-busting affair that makes you shout "Holy shit!" while laughing till it hurts.

Asobi Asobase - workshop of fun - can be viewed on Crunchyroll & VRV. Episodes 1-10 were observed for this review. Promotional consideration provided by Crunchyroll.

FILM REVIEW | Giving In With Laugh...