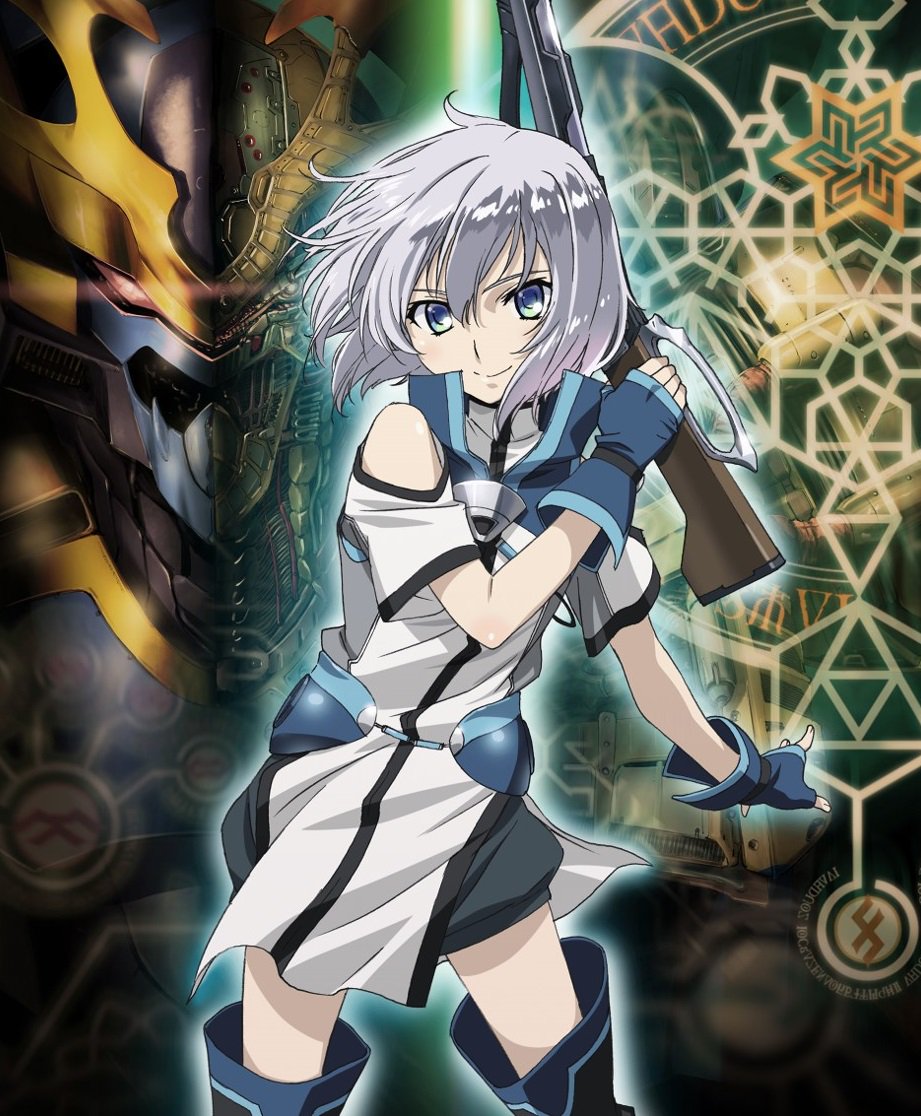 It's rare for the mech-based anime subgenre to have fun with its vast worlds. Considering its subject matter, one would think that you'd see more series with characters filled with pure joy battling it out in giant robots. With the exception of series like Gurren Lagann, Voltron, and the American-made Megas XLR, most of these shows present a serious aspect of fighting in these giant behemoths.

Perhaps this is why I have a mighty soft spot for an anime like Knight's & Magic. (And yes, there's supposed to be an apostrophe in the title, although why that is is beyond my knowledge.) Based on the light-novel series by Hisago Amazake-no, this fantasy series puts its focus on a reincarnated man who finds himself in a new world surrounded by the thing he loves most: giant mechs. Known as Silhouette Knights, the giant bots are used for battle and to protect the kingdom he resides in. In his new form, Ernesti Echivalier (Rie Takahashi) makes it his mission to build and pilot his own Silhouette Knight to keep his newfound world safe from the evils abroad. 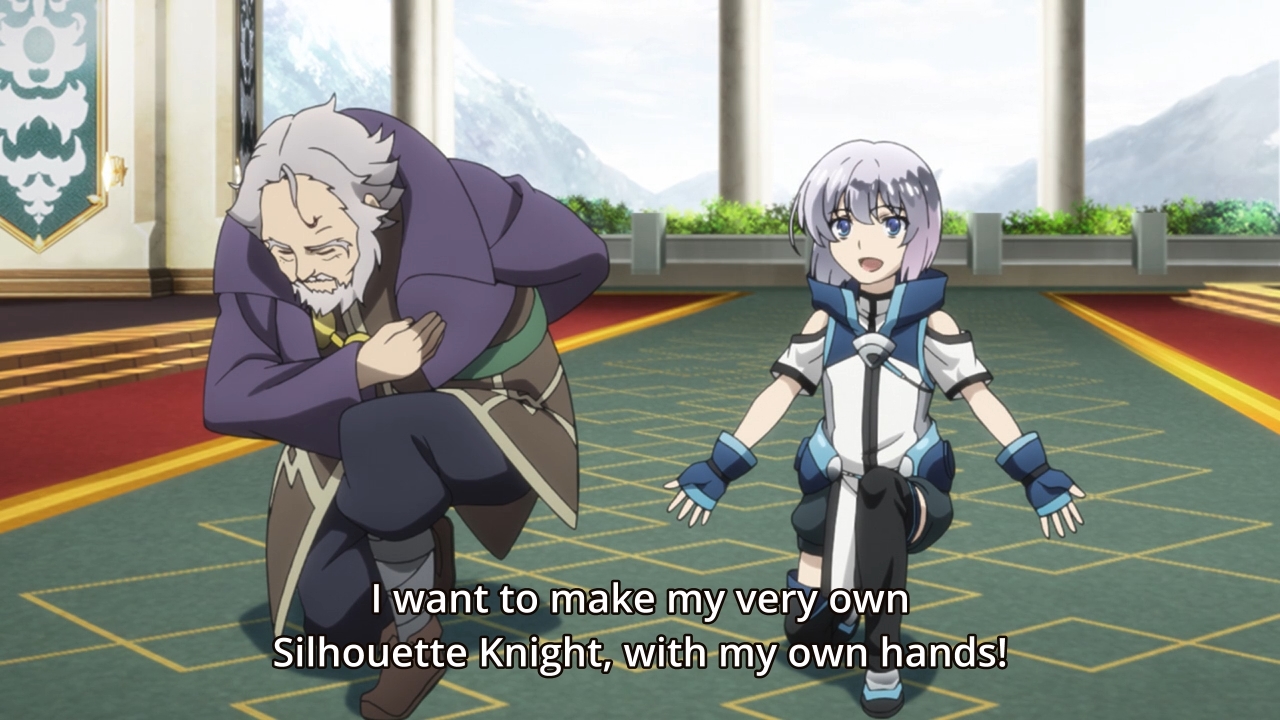 With the aid of his friends Addy (Ayaka Ōhashi) and her brother Kid (Shinsuke Sugawara), Ernesti sets off to build bigger and better things for the world to see. Using his programming skills from his past life, the young lad finds himself designing new weaponry and Silhouette Knights that evens take the King of Fremmevilla by surprise. Impressed with this knowledge, the ruler creates a new Order of Knights for Ernesti to front called the Order of the Silver Phoenix. As he and his friends set out to craft new Silhouette Knights, dangers from outside forces begin to lurk their curious minds into what is being built.

What makes Knight's & Magic a joy to watch is the perseverance of Ernesti. His can-do attitude is somewhat contagious, as he attempts to better his skills and designs to suit his own desires. Often that makes him thickheaded regarding his social skills, especially when it comes to Addy's romantic cues toward him. Because of this balance of tech smarts and street stupidity, Ernesti's actions and reactions make him one adorable character to watch. However that's not to say that he doesn't have a serious side to his passion. 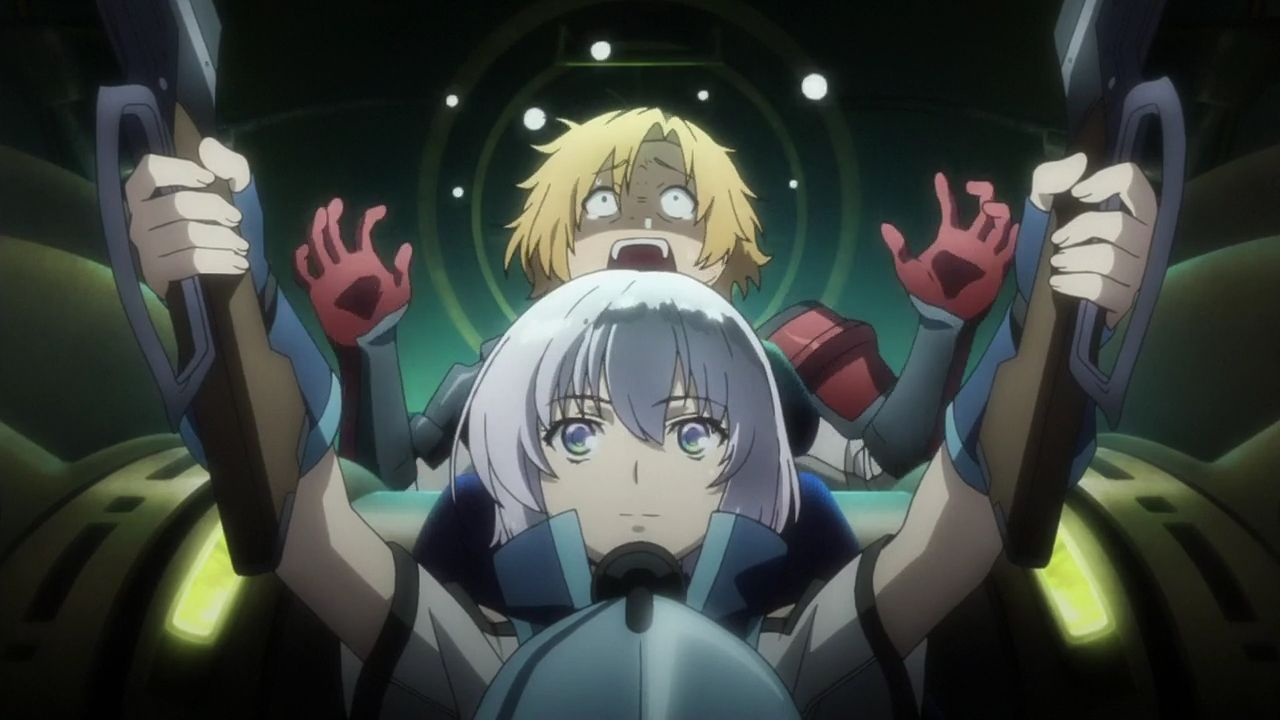 Although we rarely see him frustrated, you can tell that he's often angered when the things he loves are used for despicable purposes. This is very apparent later on in the series when the Order of the Silver Phoenix is tasked to aid the failed kingdom of Kuschperchan and the newly-crowned Queen Eleonora (Yukari Tamura). Even when impressed with the enemy Zaloudek Kingdom's own inventions, he finds himself conflicted with his love of new tech and his desire to protect those close to him. With that being said, a quick deal with Eleonora for the scraps of whatever they find in battle easily keeps him from drifting off towards a greedier path.

It's Ernesti's youthful perception that keeps Knight's & Magic from being your usually grim mech show. Instead of focusing on the violence that these Silhouette Knights are capable of, what is at the forefront is the more tech-advanced knowledge and wonderment that these giant machines are very capable of. Thankfully it doesn't get all too exposition-y with the tech, and we're treated to an anime that instead has more fun with its subject matter rather than put a solemn face on. Even the politics of war and battles are sorta pushed to the side via Ken Burns-styled narration, which -- to be fair -- can pop in and out in some weird spots. 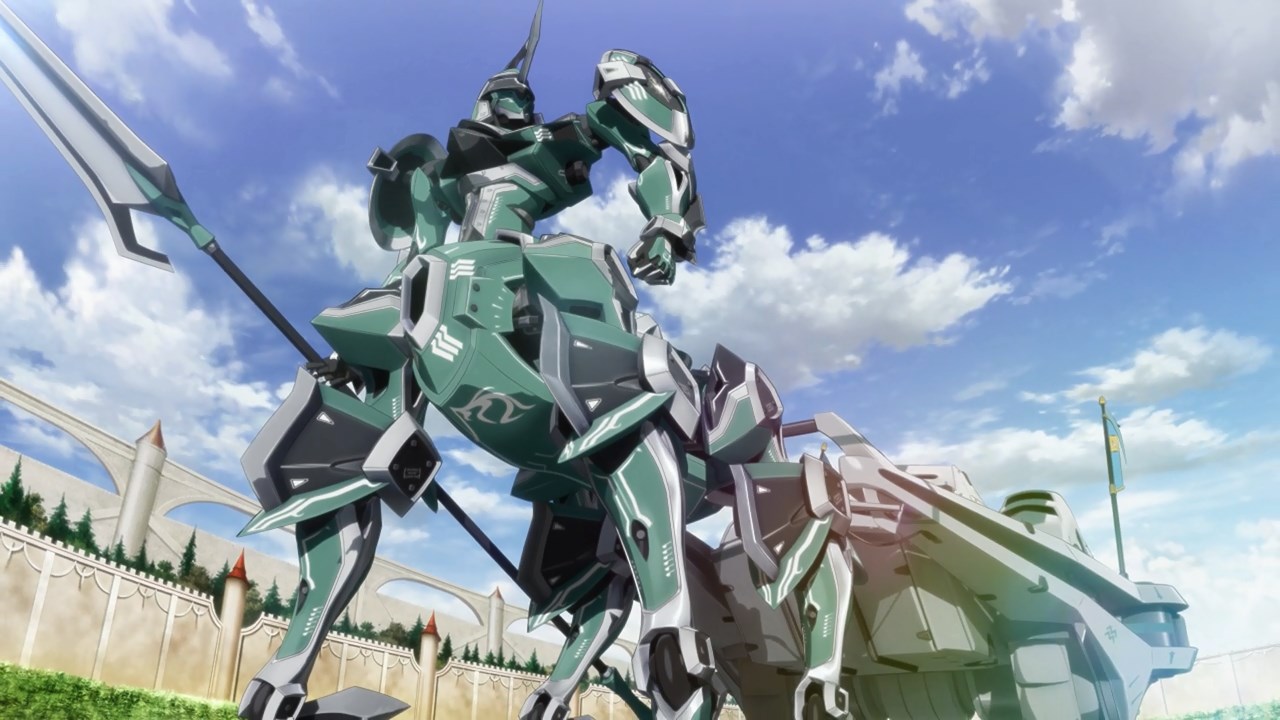 Equally impressive is the animation from 8-Bit (Tokyo Ravens, The Fruit of Grisala), which blends the traditional cel-drawn style with some of the most impressive 3D mechs seen in an anime. When things are calm, one can marvel at the beautiful scenery and buildings of Fremmevilla and Kuschperchan, as well as the expressive and life-brimming character designs. However when it's time to throw down, the 3D animation flows with beauty, action, and detail, especially when you see damage being done to the Silhouette Knights. It's a presentation that goes to show how far along the Japanese industry has come in the art of 3D animation, hopefully sweeping its recent embarrassments under the rug. (I'm looking at you, 2016 Berserk anime series!)

Takahashi is the heart of the show as Ernesti, bringing to the role the right amount of can-do attitude with youthful spunk. Her performance makes it easy to root for such a character, one that never gets too full of himself and keeps his close friends in mind when making the biggest of decisions. Ōhashi's Addy works both as a good friend for Ernesti and hopeful love interest, cutting away some of the tension of battle with a quick reminder and coy mentality. The same can be said for Sugawara's Kid, who takes to Ernesti like a sibling and becomes the perfect right-hand man for the mech lover's Royal Order. 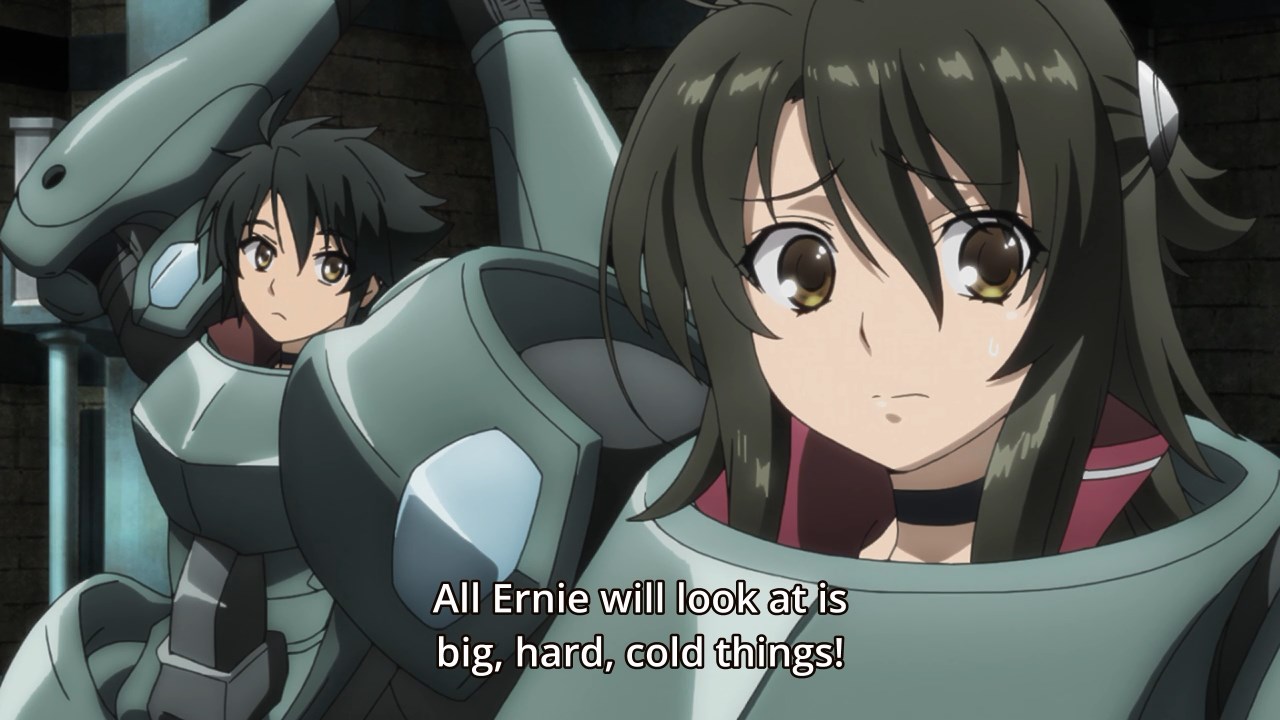 The battle-friendly score by Masato Kōda (KonoSuba, Maria the Virgin Witch) adds an extra dose of excitement when the Silhouette Knights are in action, but knows when to keep things cooled down when it comes time for the show to take a breather. Opening theme "Hello!MyWorld!!" by fhána is a peppy exciting song that presents the wonders of Ernesti's new life, one that acts as another reason why this band is quickly becoming one of my favorites. Ōhashi takes the reins of the show's closer "You & I," and while it lacks the excitement of the opener, it does keep close the more positive attitude this series presents itself.

Knight's & Magic is a mech series that knows how to have fun without dumbing itself down. With its happy-go-lucky protagonist and some excellent animation, this series easily finds itself as being one of this summer's most enjoyable romps. While it does leave things open for a (hopeful) second season, what we're given is a well-rounded alternate world tale of tech and childlike wonder. Join the Order of the Silver Phoenix, and see for yourself why Knight's & Magic will leave you a smile and positive vibe long after the end credits have rolled.

Knight's & Magic can be viewed on Crunchyroll, Funimation, and VRV. It has been licensed by Funimation. Episodes 1-13 were observed for this review. Promotional consideration provided by Crunchyroll.

Background Noise: Wonderful Wonderful by The Killers - The Las Vegas-based new wave rockers are back with their best album since 2006's Sam's Town. Brandon Flowers and company add a dose of willpower to their rock ballads, all the while making room for a dance or two in the likes of "The Man" and "Run For Cover." It's when the band's heart is shown fully vulnerable in the songs "Some Kind of Love" and "Life To Come" where the album shines at its brightest and boldest. If you need something uplifting enough to make you create something majestic -- be it a story or a giant robot -- then the fifth album from The Killers will mesh with your crafting skills with the greatest of ease.