ANIME REVIEW | An Undead Twist On Slice-of-Life In "School-Live!" 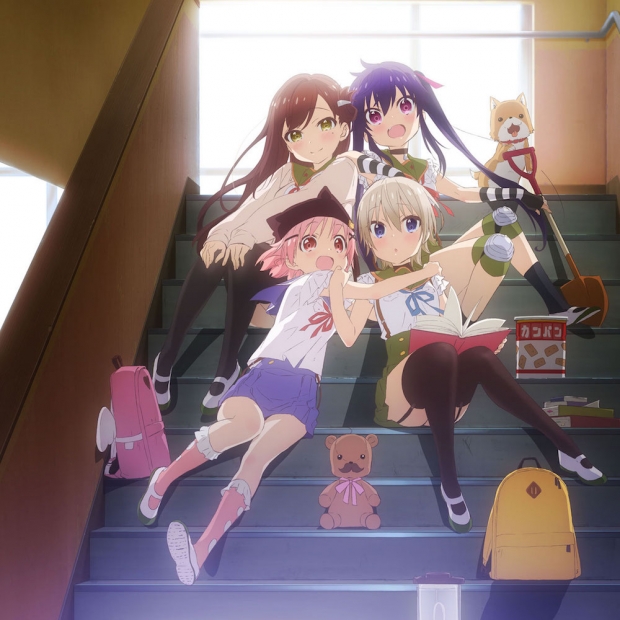 Walking blindly into School-Live! is like the equivalent of being shot in the face in the midst of your wedding vows. It all starts out wonderfully colorful and filled with happiness, and then all of a sudden something comes along and destroys what should be an incredibly joyful day. This is what this anime has done to the slice-of-life genre: it takes the humor within an average daily life and then thrusts it upon the worst-case scenario you could ever imagine.

Based on the manga by Norimitsu Kaihō and Sadoru Chiba, School-Live! follows the School Living Club in Megurigaoka High School. Its members -- Yuki, Kurumi, Yūri, Miki, and a Shiba Inu pup named Tarōmaru -- find themselves living on campus in order to gain a close love to the academy that they attend. School life seems all non-chalant, as Yuki run arounds the campus cheerfully while some shenanigans and classroom fun unfold. The world these characters live in seems mundane, with the usually schtick we come to expect from these types of anime series. 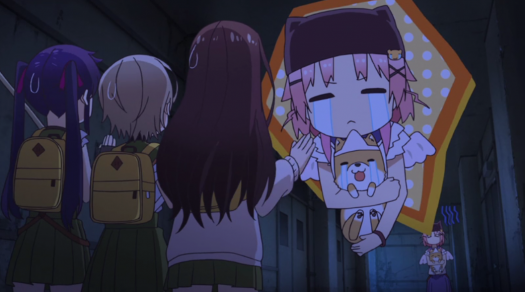 That's when School-Live! pulls the wool from our eyes and reveals the truth: Yuki's school life is all in her head, and she and the rest of the club are survivors of a zombie apocalypse. While Yuki goofs off as a coping mechanism, Kurumi, Yūri, and Miki do everything they can to make sure they have enough supplies and that the undead waiting outside stays away from the classrooms. As the situations become more dire as the episodes stretch out, one may wonder when the funny-hatted optimist will wake up from her technicolor dream and come face-to-face with the grim and bloody nightmare she truly lives in.

It's interesting to see how a slice-of-life comedy would fare during a zombie outbreak, and the results are very clear. Despite all the silliness that comes from Yuki's desire to have fun with the rest of the club, the underlying fear of the undead that roam the land sticks around in the background. You'll see broken windows, bloodied floors, classrooms completely wrecked, and zombies roaming the school fields while the School Living Club participates in tests of courage, "camp-outs," pool activities, and arts & crafts. It's all to keep Yuki in check, with the rest of the classmates doing all that they can to stay alive and not break her illusion. 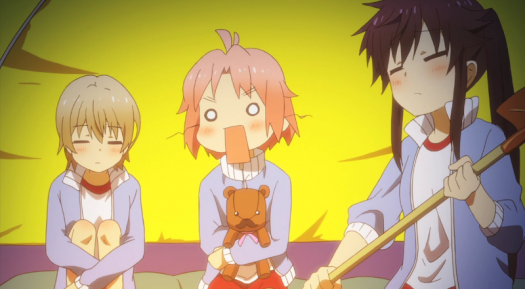 School-Live! is the type of anime that revels in screwing around with the audience. As we see things from time-to-time via Yuki's point-of-view, we start to question the realities from the fantasies. Pretty soon it becomes apparent that everything turns into a questionable scenario, especially when it comes to the true nature of one of the characters. (I will not spoil it here, but when a moment comes around that hits you like a ton of bricks, that'll be the thing I'm referring to.) One of the key aspects this anime is able to do greatly is showcase the power of tragedy. Friendships are broken apart due to fear factors, and promises are put to the test in the most frightful of situations.

This is all pieced together fantastically thanks to the performances of the main seiyu. Inori Minase brings the lightheartedness to full throttle in her role as Yuki, with hints of dark recollection molding her into one of the finest tragic characters this season. As Kurumi, Ari Ozawa pieces together a fine portrayal of a brave confident who is almost always prepared for the inevitable. M.A.O's take on Yūri is filled with false optimism, with her true frightened self peeking from the cracks of her personality. Rie Takahashi takes on the role of Miki with a hint of courage that hides behind a terrified young girl, with her ability to play along with Yuki building up towards a strong and important friendship. 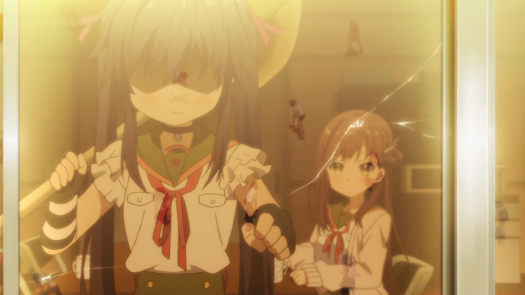 It may seem strange, but extra credit should be given to Emiri Katō for her performance as the Shiba Inu pup Tarōmaru. With only a few barks and whimpers, Katō is able to provide the viewer with the attitude, the mentality, and even -- at times -- what the dog is pondering at that very moment. While it may not be up there with Ikue Ohtani's iconic role as Pikachu, what Katō is able to project into this adorable pet is simply remarkable.

Studio Lerche (who also did this year's Assassination Classroom and Monster Musume) was able to combine Yuki's colorful perception of the world around her and the ghastly grim real-world situation that has befallen Japan. How they mix in with one another gives way to some clever perception tricks, from broken windows in a seemingly lively school hall to the sight of zombies roaming the schoolyard while the girls have some much-needed pool fun. Perhaps the most unique thing about the animation is the portrayal of the zombies. 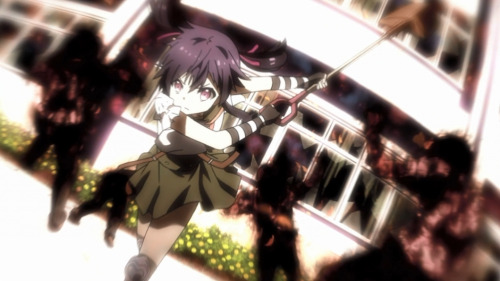 With their faces are seemingly blacked out, their look is not a clever trick for animators to cut around some corners; rather we are seeing the undead from the perspective of the School Living Club. These walking dead were once their peers, and in order to take them down they need to realize that they're not who they once were anymore. Hence why you rarely see their faces, because it's harder to kill a zombie when you can still recognize them as a former close friend or confident.

MOSAIC.WAV's score jumps from the light-hearted to the scary unknown with the flip of a coin. Both sides are brought together nicely, mixing up with some zany melodies whenever Yuki goes full-on crazy at the club and haunting piano pieces when memories of dark times come crawling into the students' heads. This contrast can also be heard in the opening and ending theme songs, with the upbeat opener "Friend Shitai" performed by the main seiyuu and the downer closers found in the form of Maon Kurosaki's "Harmonize Clover" and "Afterglow." 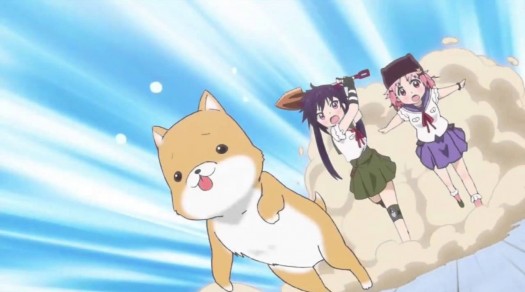 However, no song in any anime this year will tear at your heartstrings quite like the insert track "We took each other's hand" by Kaori Sawada. A slow piano-led jazz melody, the song appears during some recollection moments involving Miki, and it knows how to punch you in the gut with the amount of emotion put into Sawada's vocals. Trust me: when you hear it, you'll wanna hear more from her.

We should be glad that a show like School-Live! is now in existence. It's funny, heartbreaking, shocking, gory, and many other things that usually don't fit well with the genre it is. And yet just about everything about it is perfect: the story, the characters, the scenarios, and even little Tarōmaru. There are many things we can compare it to, but after sitting through every episode it's very clear: School-Live! is in a league all of its own.

School-Live! can be viewed on Crunchyroll, The Anime Network, and Hulu. It has been licensed by Sentai Filmworks. Episodes 1-12 were observed for this review.