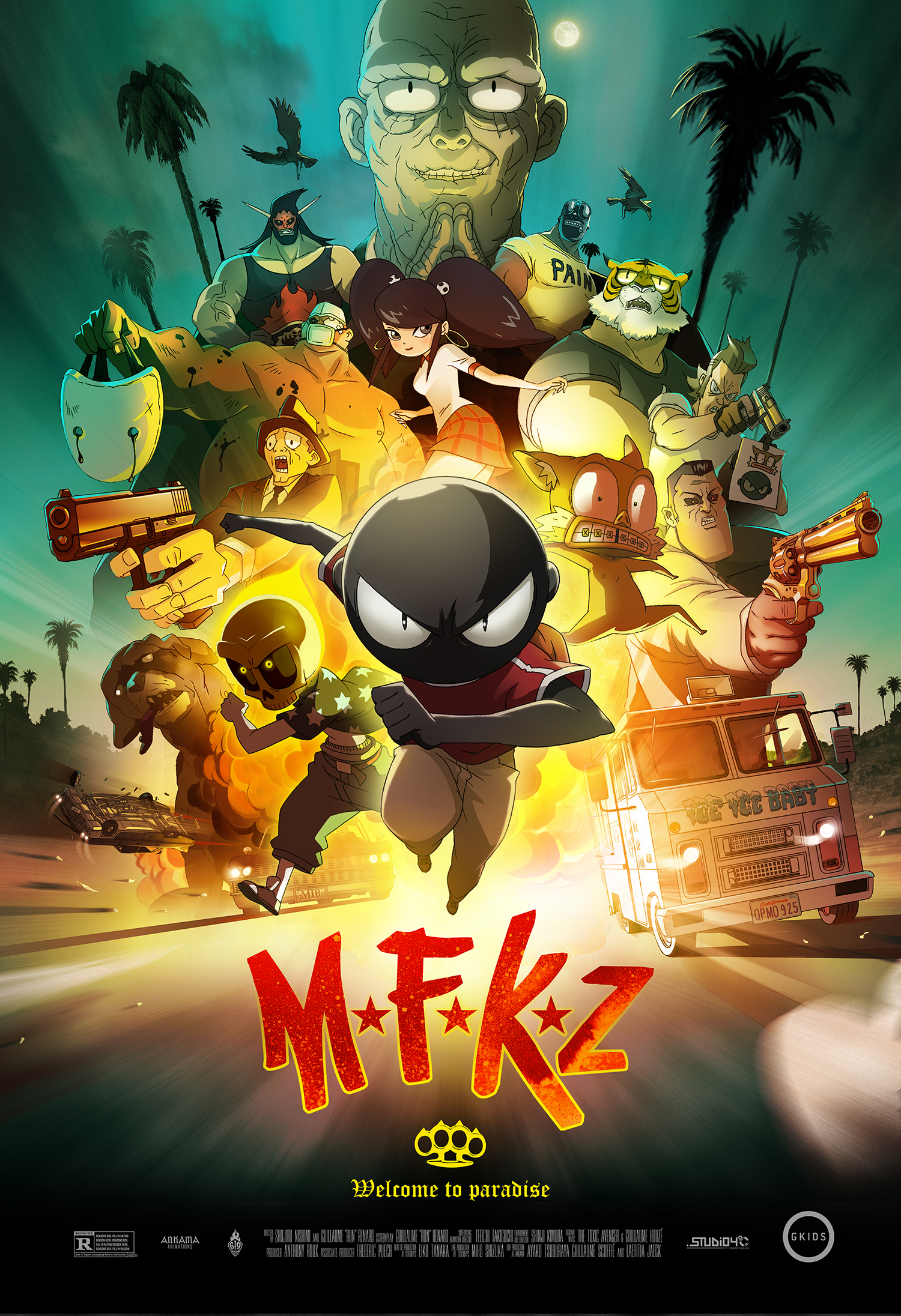 It was five years ago when Studio 4ºC and Ankama Animation gave the world a taste of MFKZ (or Mutafukaz, as it's known throughout the rest of the world). Since that time, each visual leaked was drenched with badassery, giving promise that this would showcases one of the most unique anime films of all-time. Now that Guillaume "Run" Renard and Shōjirō Nishimi's flick has finally hit theaters all around the world, was the hype worth believing? Short answer: yes, to a point.

Based on Run's comic, MFKZ places he spotlight on Angelino, who has a run-in with a truck after he eyes a beautiful woman on the Dark Meat City streets. Since that time, he starts seeing people with demon-like shadows, something that his flaming skullheaded pal Vinz scoffs off at first. That's when strange men in black start chasing after the two, wrecking everything in their path with bullets and heavy arsenal. With a crew of luchadore wrestlers, a Shakespeare-quoting banger, and even the distraction that caused all this to begin with in his path, Angelino's quest for the truth throws him in danger around every turn.

Story-wise, it's easy to see how challenging it was for Run to adapt his massive comic into a 90-minute film. While it gave him the chance to iron out some of the wrinkles from its narrative, it's also apparent that there was a lot of important material that was cast aside for the sake of timing. Because of this, some of the scenes tend to drag a lot more than they should. Time that could've been used to help build up the world is instead spent having the characters shooting the breeze with little context.

However, it's when the action goes into full swing when MFKZ shines. Viewers are treated to the sights of Angelino and Vinz evade gunfire, throwing down against government agents, and racing through the streets at high octane speeds. Asses are kicked, fools are shot up in a bloody firefight, and profanities are spewed like angst poetry. The film has loads of character thanks to Studio 4ºC's animation, with the Oakland-styled Dark Meat City brimming with grime and detailed nastiness that harkens back to their Mind Game production. Angelino describes his home as disgusting, and the animators push the limits to showcase how horrid his living quarters are (down to him having a legit cockroach army bidding to his will!).

The third act of the film is when everything comes together, and the hows and whys of Angelino, the crush, and the strange beings roaming Dark Meat City are fully revealed. Although it takes some liberties to tie up everything quickly, it's done so without having to feel too rushed to get back on the road ahead. It never worries about pushing the envelope; it takes all the crazy it can handle and flings it at the viewers like a high-octane paper plane. All of this is wrapped in a memorable soundtrack by French artist The Toxic Avenger, which is brimming with intensity and John Carpenter-influenced synth.

For its English dub, GKIDS managed to nab a cast that fit perfectly into their roles. Kenn Michael showcases a relatable mentality as Angelino, as Vince Staples tackles the role of the smart-aleck friend Vinz with a strong comedic presence. Wu-Tang Clan's The RZA shows his book-smart chops as Shakespeare, spouting Bard quotes during the most appropriate of times. Even though Danny Trejo gives off one slick performance as the wicked Bruce, it's Michael Chiklis as his henchman Agent Crocodile that nabs his spotlight thanks to his gruff attitude and surprisingly humorous anecdotes.

In the end, MFKZ delivers one gangsta anime experience. While its narrative can be a little bit uneven at times, this crazy adventure with Angelino and Vinz gives us some of the most over-the-top violence and fun-packed bantering seen in the animated in awhile. Here's hoping Run's Puta Madre spinoff is given the same treatment, especially with the way this film ends. (But let's hope it doesn't take another five years to get it done!)