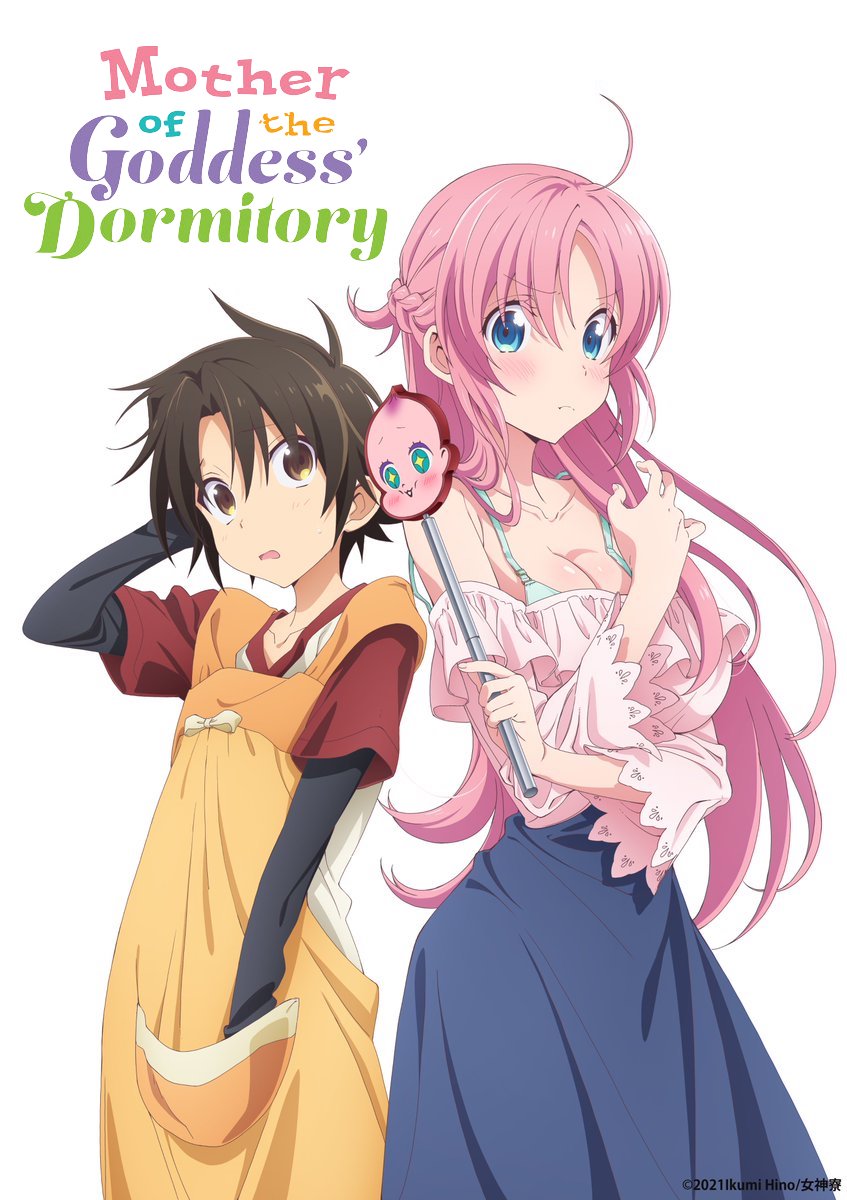 Considering that the very first shot of Mother of the Goddess’ Dormitory features three of its characters stark-raving nude in the bath, some would argue if that sight alone would either raise or lower a viewer's interest. After all, many harem anime use fan-service to keep its viewers attention, especially those that have bland storytelling. However, merely tuning out just because of its first scene does the series a disservice. In fact, as Mother of the Goddess' Dormitory progresses, one will find something surprising about its narrative.

Based on the manga by Ikumi Hino, Mother of the Goddess’ Dormitory follows a down-on-his-luck boy named Koushi Nagumo (Misuzu Yamada). He finds himself homeless after his home burns down without any family to bring him in. Nearly fainting in from hunger, Koshi falls into the arms of Mineru Wachi (Chiaki Takahashi). She brings him home and feeds him, allowing him usage of her bath. However, upon entering the bath, Koshi quickly discovers that Mineru lives with other women: Kiriya Sensho (Risako Murai), Serene Hosumi (Yuki Yomichi), and Frey (Asaki Fukuyama). After misunderstandings a-plenty, Mineru offers Koshi the offer of a lifetime: become the Dormitory Mother of the household, and he’ll get a roof over his head. 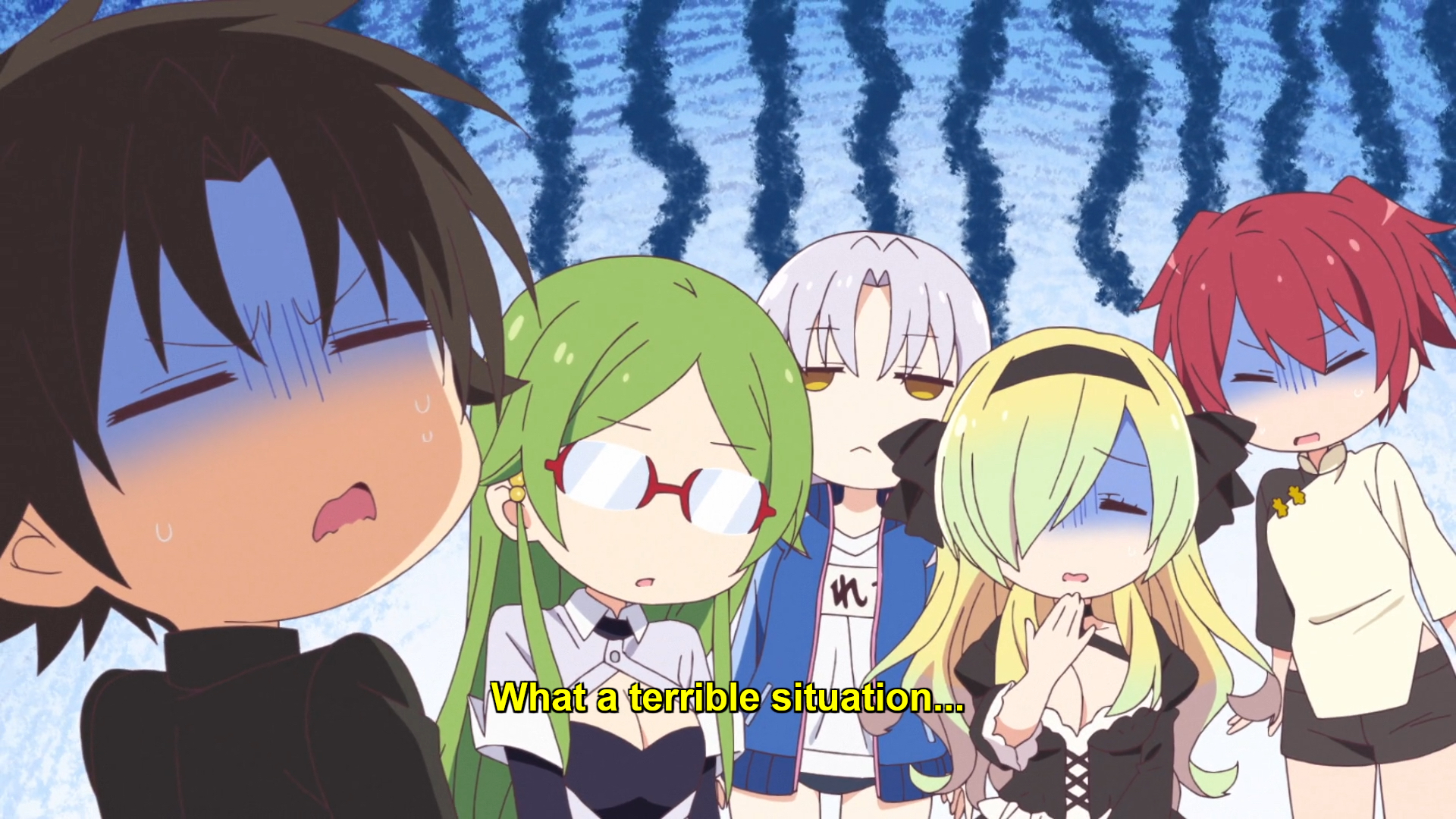 But before he’s fully accepted to the fold, Koushi must face the biggest obstacle: resident Atena Saotome (Ayaka Nanase), who has a fear of men. In fact, her phobia’s so bad, that it causes her massive nosebleeds if she were merely touched by a guy. After gaining Atena’s confidence, Koushi begins work taking care of the residence. However, he quickly discovers why many townsfolk have deemed the place a “Problem Dorm”, due to Mineru’s science experiments, Frey’s need to force weird cosplay on others, and Kiriya not knowing her strength very well.

Mother of the Goddess’ Dormitory doesn’t shy away from its harem label in the least bit. As mentioned, the series starts out with three of its cast members in the buff, with Koushi rightfully freaking out over the sight. This element is something that occurs a lot in the first couple of episodes, and while it’s a staple of this genre of humor, it can get a little tiresome and lazy. After all, throwing in nudity to compensate for a lack of character development is one of the worst offenses a harem series can do. 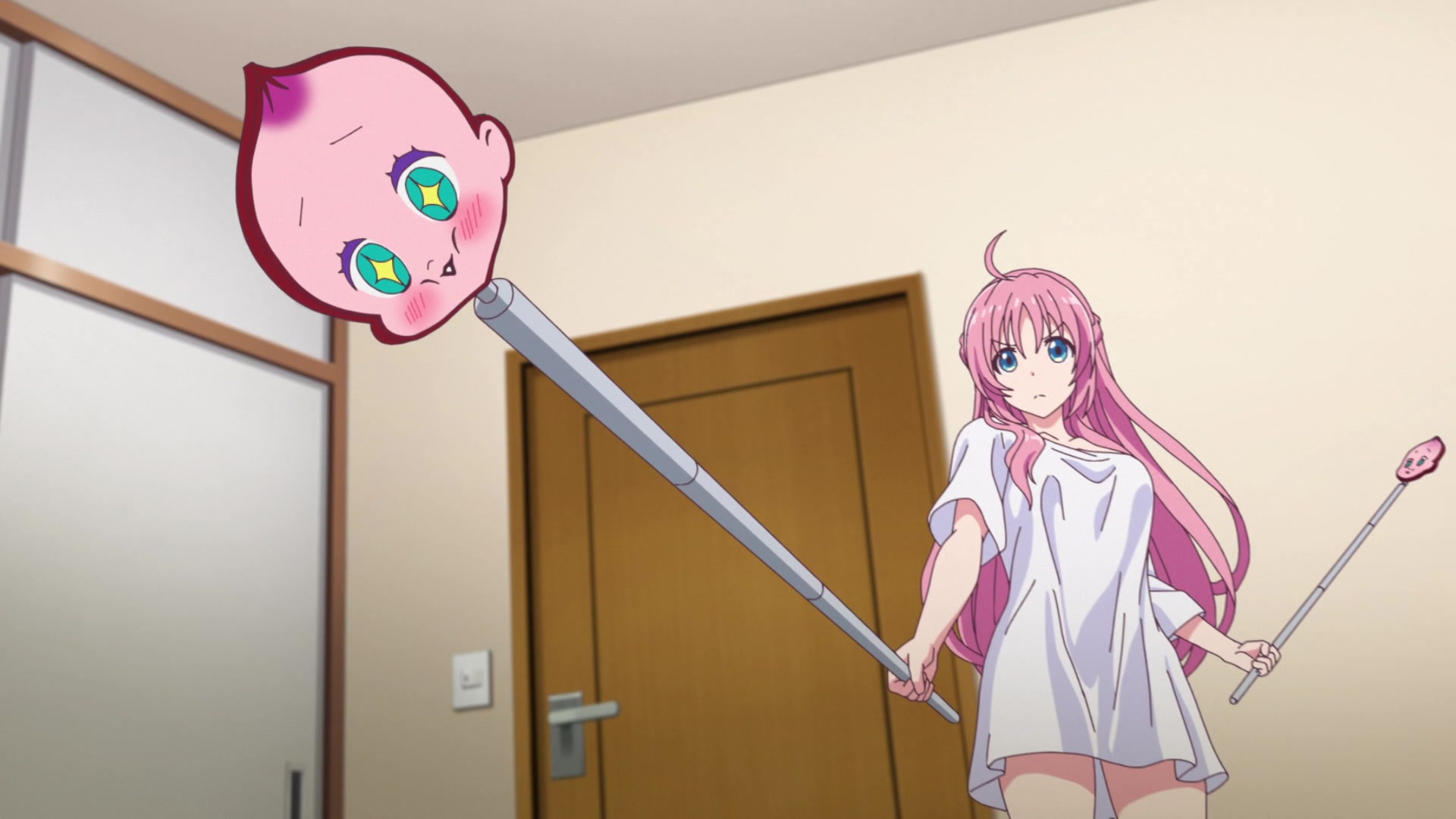 Out of nowhere, the anime somehow realizes this, and begins toning down the pervertedness while focusing on the attitudes and personalities of these characters. Koushi quickly becomes someone who takes responsibility by the arm, and guides his tasks towards completion. You can see he wants to be a better man than his own father, who abandoned him for reasons yet to be revealed. In his mind, being a man means owning up to their flaws, protecting those he cares most about, and achieving his goals despite the hurdles placed in his path.

The same can be said about some of the women whom Koushi lives with. Atena overcomes her fears of men, going so far as to see Koshi as a little brother she can dote on. Kiriya attempts to overcome her strong androgynous nature, showcasing that despite her tough exterior, she wants to experience love like in her favorite shojo manga. Frey, who is confident in cosplay, seeks that same strength when she wants to be herself. As for mad scientist Mineru, well, let’s just call her a lost cause for the time being. 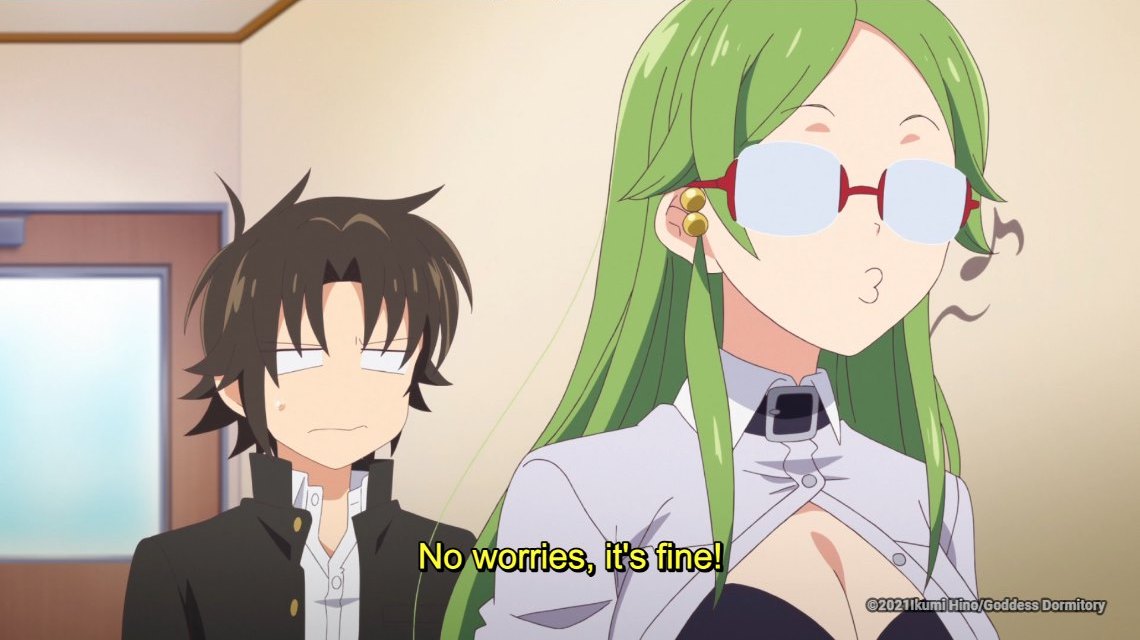 Perhaps the most mysterious of the residents is Serene, who has a strange connection with the moon. She claims the lunar orb as a source of her powers, which she demonstrates when certain situations get out of hand. While there are hints of her not being of this world, it’s yet to fully confirm these suspicions. (Her personality reminds me a lot of Yaya from Yuuna and the Haunted Hot Springs, especially with her feline-like mannerisms.)

Despite this growth in the characters, Mother of the Goddess’ Dormitory keeps most of its focus on the humorous side. Although there are many repeated gags revolved around Koshi falling in to the chests of his roommates, it tries to not just be that. A good example of this is during the college festival event, where Koushi experiences every wacky shenanigan that can occur at such an event. From Mineru selling unauthorized goods to Atena roughing it through a maid cafe job, these moments are delivered with plenty of laughable situations. (It’s also cute when Koushi accidentally drinks one of Mineru’s elixirs, only to find out it was a placebo all along!) 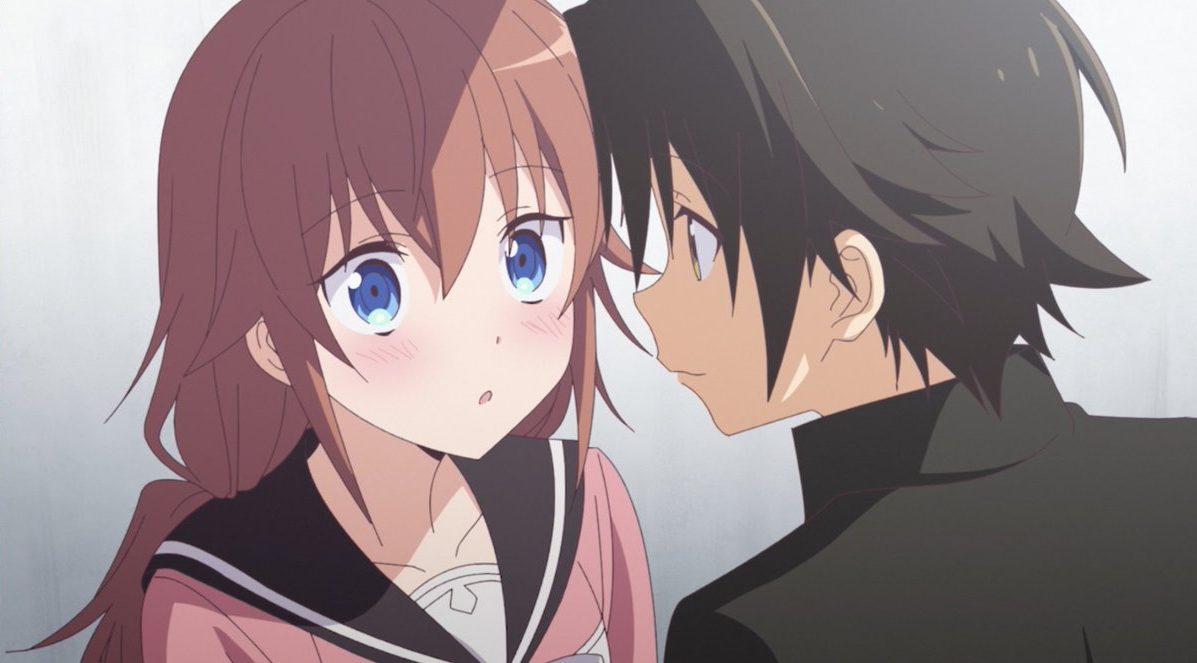 The addition of Koushi’s classmate Sutea (Hikaru Nanjo) also brings a lot of surprising laughs. She’s literally rough on her classmate, due to her issues dealing with heat intolerance. However, a flashback shows that Koushi’s kind and thoughtful nature isn’t something that appeared out of nowhere; he’s always been a good chum and a kind soul. Despite her toughness to compensate for her shortness, Sutea shows that she genuinely cares about Koushi, even if it’s yet to be revealed if it’s true love or not.

Story-wise, Mother of the Goddess’ Dormitory is a pretty standard harem affair. Thankfully, it has a good script that keeps the narrative from going stale. It presents these characters in a way that make them easy to care about, despite its rough beginnings. This care is also demonstrated well by the voice cast, who give it their all to breathe life into these surprisingly complicated characters. 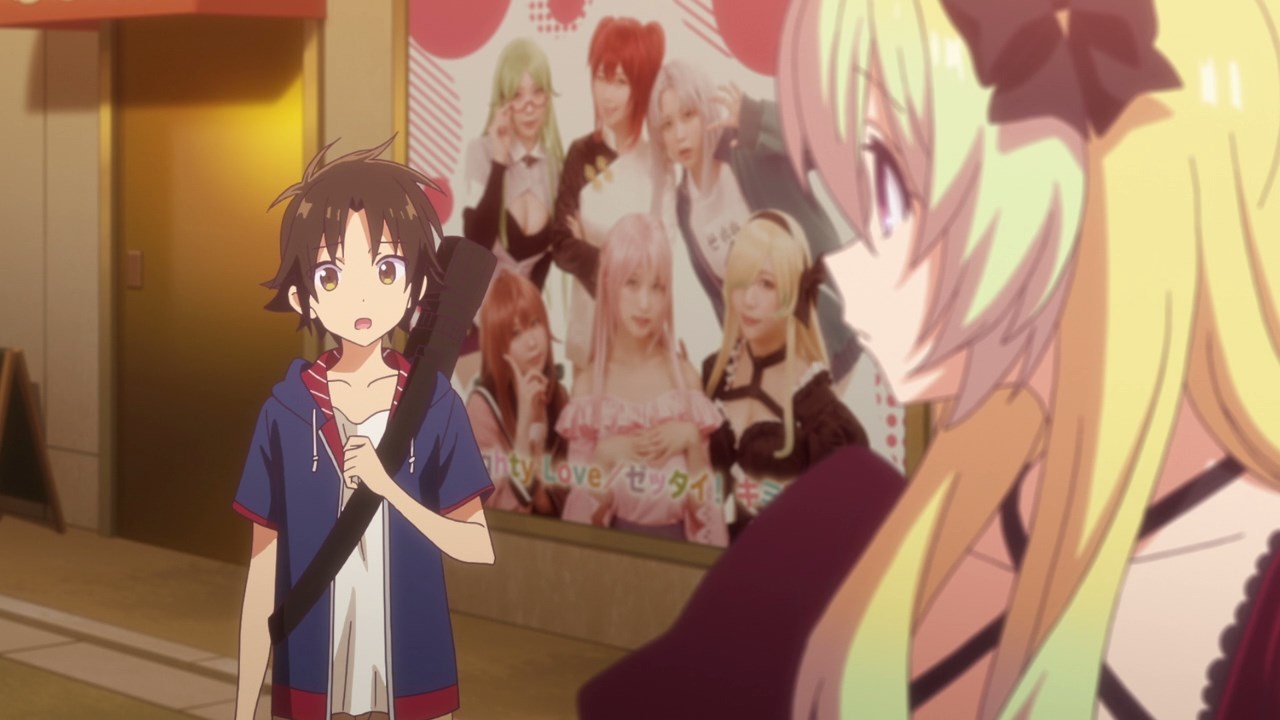 Yamada brings a mixture of cuteness and can-do attitude in her portrayal of Koushi, while Nanase delivers a true big sister vibe as Atena. Takahashi delivers the zany as Mineru, embracing the chaos she creates with glee. As Kiriya, Murai offers a performance that’s both humorously tough while adorable when it’s time to act girly. Yomichi is stoic as Serene, as it meshes well with the character’s mysterious side. Meanwhile, Nanjo’s Sutea is typical small student fare, bringing to mind the voice work of Rie Kugimiya and Sayuri Yahagi.

Seeing as the company was founded by ex-Xebec members, Asread (Shuffle!, Future Diary) is a fine fit for animating Mother of the Goddess’ Dormitory. While it can be choppy in the slower parts, it does a good job when it comes time for the fast-paced action and comedy to take hold of the viewers. And yes, they do a good job with the fan-service parts, framing them either erotically or humorously depending on the situation. 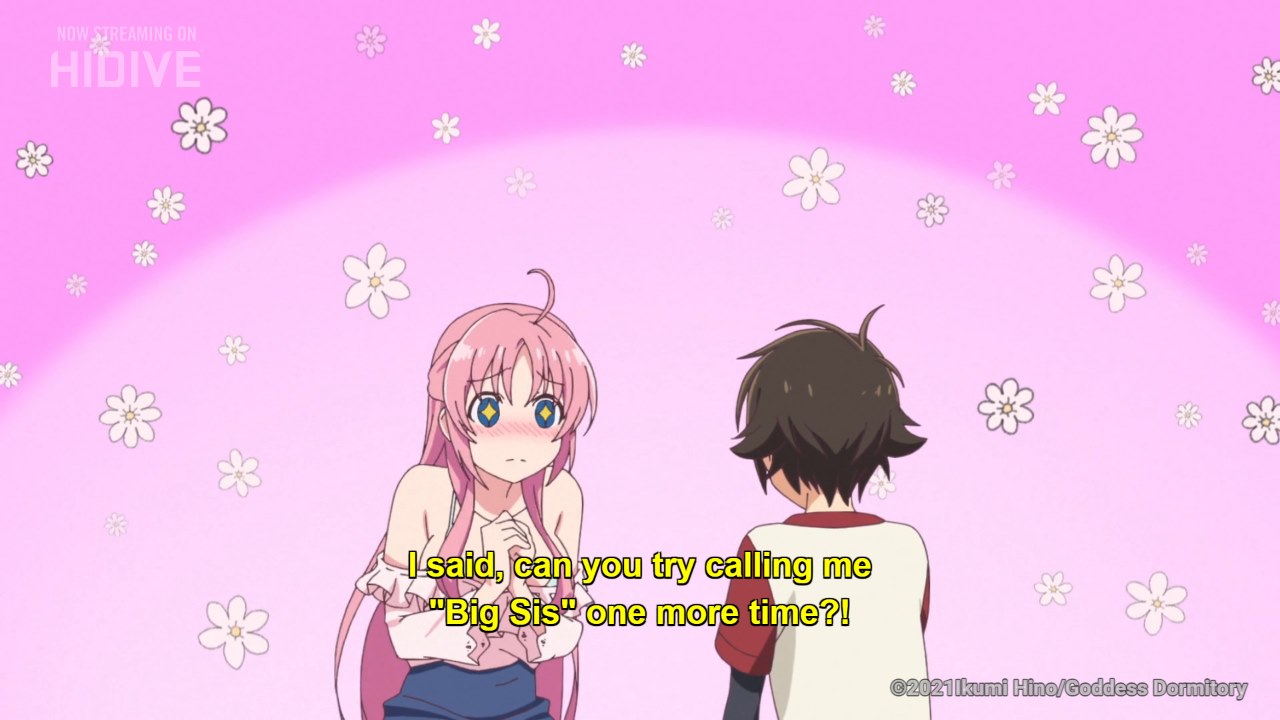 Composer Tomoki Kikuya (Squid Girl, Blend S) does an okay job with the soundtrack to the anime, although it’s not as memorable as some of his past works. The melodies frame the scenes, but not in a way that punches them up. The female characters — in the guise of Megami Ryosei — helm both the show’s opening and ending theme, with mixed results. “Naughty Love” has an 80s pop vibe to it that makes it catchy, whereas “Zettai! Kimi Sengen” lacks a certain oomph in its theatrical presentation.

Not everyone will enjoy Mother of the Goddess’ Dormitory, especially those who aren’t into R-rated harem series. With that being said, those who are into that genre will get a proper eyeful of fan-service with a good side of mindful character development. Yes, it can be mindless at time, but our brains deserve a little junk food here and there. So if you need something that requires little thinking and will make you laugh, then you can’t go wrong with the dish that Mother of the Goddess’ Dormitory has prepared for you.

Mother of the Goddess’ Dormitory can be viewed on HIDIVE and VRV. It has been licensed by Sentai Filmworks. Episodes 1-8 were observed for this review. Promotional consideration provided by HIDIVE and Ellation.