HomeAnimeANIME REVIEW | Service With A Hearty Funny Bone in "BLEND-S"

ANIME REVIEW | Service With A Hearty Funny Bone in "BLEND-S" 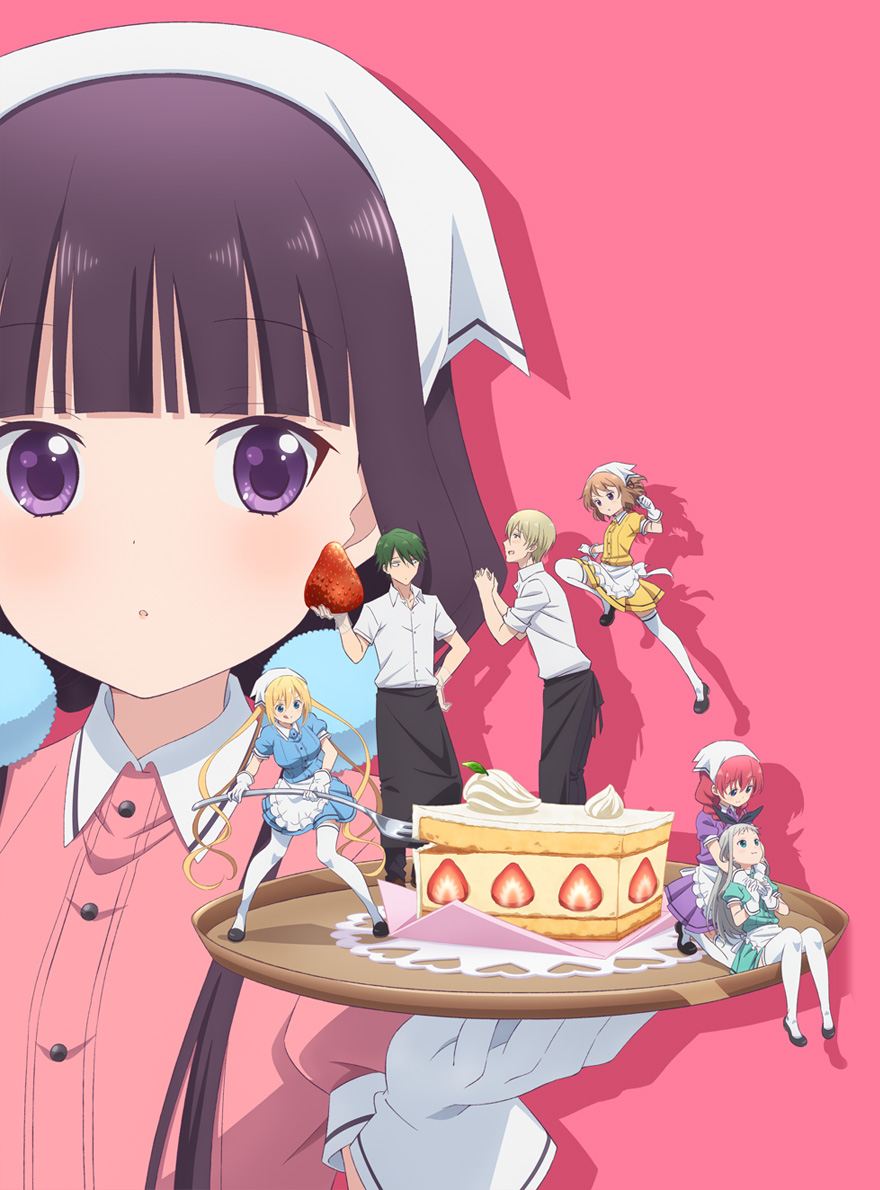 ANIME REVIEW | Service With A Hearty Funny Bone in "BLEND-S"

Looking at promo pics and trailers of the fall series BLEND-S, I expected there to be somewhat of a decent amount of cutesy entertainment delivered in small doses. A Whitman's Sampler of comedy, if you will, with some selections satisfying the tastebuds and others left in the box because they had the anime equivalent of coconut filling. Imagine my shock when I was instead given a three-course meal of comedic deliciousness that rivaled even the Wagnaria!! franchise. Needless to say, this is one anime worthy of whetting your appetite.

Based on the four-panel comic by Miyuki Nakayama, BLEND-S follows a young girl wanting to travel the world. However, as one will quickly realize, globe-hopping requires a lot of cash, resulting in our heroine Maika Sakuranomiya (Azumi Waki) job-hunting to fund her dreams. Sadly every interview results in her being rejected on account of her suffering from what most people call "resting bitch-face syndrome," which shows especially when she attempts to smile. However a chance meeting with a young Italian chef named Dino (Tomoaki Maeno) brings good luck her way, having her being hired right on the spot for his café Stile. 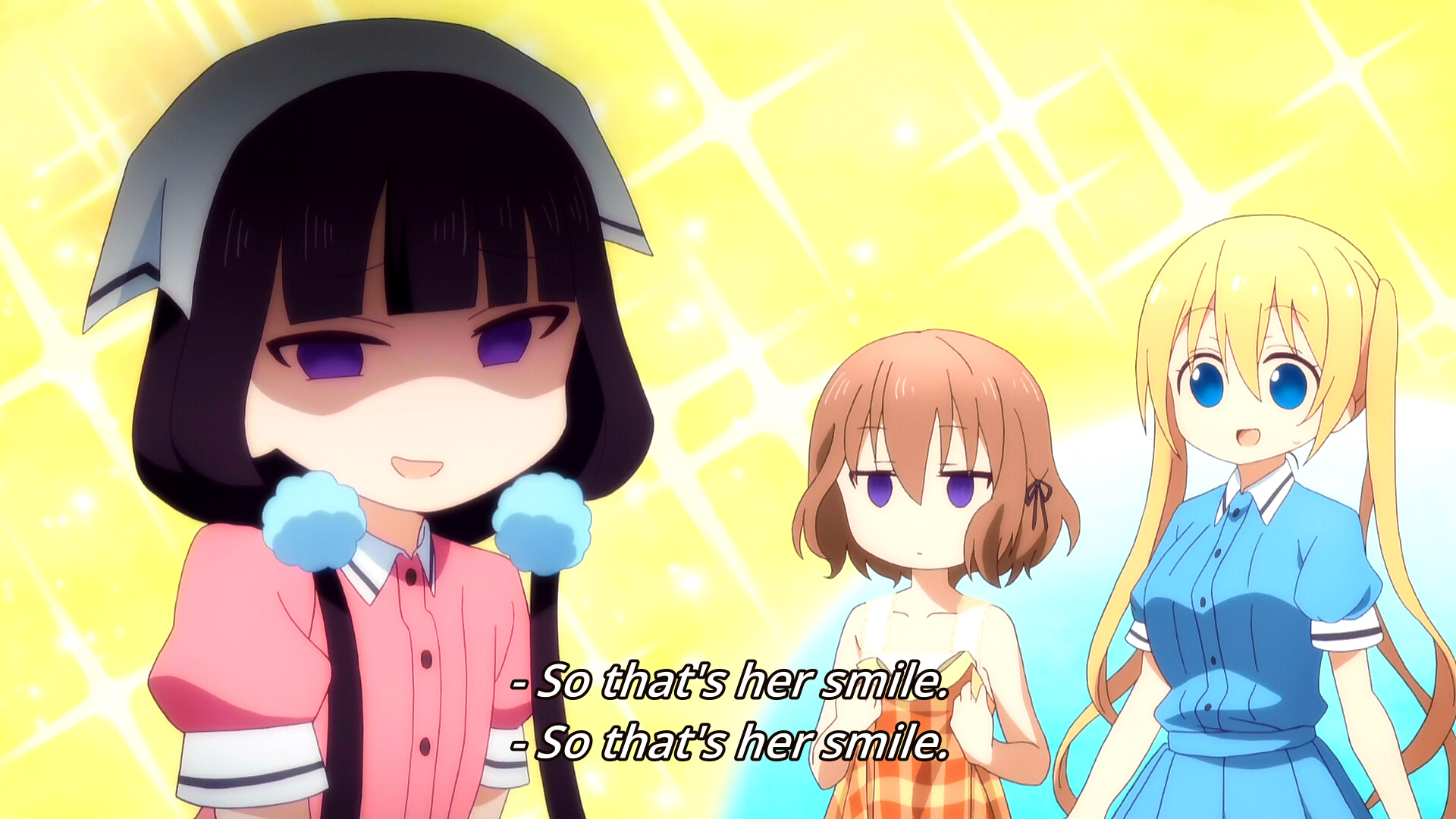 Quickly Maika sees that this is no ordinary café, as Stile's waitress staff consists of ladies with unique traits. The game-loving Kaho Hinata (Akari Kitō) showcases a tsundere attitude towards the customers, whereas college student Mafuyu Hoshikawa (Anzu Haruno) uses her short stature to her advantage playing an adorable little sister character. Thanks to her weird smile, Maika is chosen to be a sadist character, a task that comes naturally, despite her kindhearted mentality. As time goes by, others are added to the wait staff, including the dojinshi-drawing Miu Amano (Atsumi Tanezaki) acting as a big sister and the cross-dressing Hideri Kanzaki (Sora Tokui) partaking in idol-influenced mannerisms with his customers.

It's hard to truly describe why BLEND-S works as well as it does. Often it does the usual schtick other workplace comedies like Wagnaria!!, NEW GAME!, or even The Office have delivered in the past, with the usual banter and misunderstandings that come entangled within the sub-genre. Perhaps what makes this one stand out more is its ability to pull such a camaraderie together at Cafe Stile, the kind with people having as many strengths as there are flaws. While some of the stuff that happens can be considered fantastical, the feelings and mentalities these characters have are very relatable. 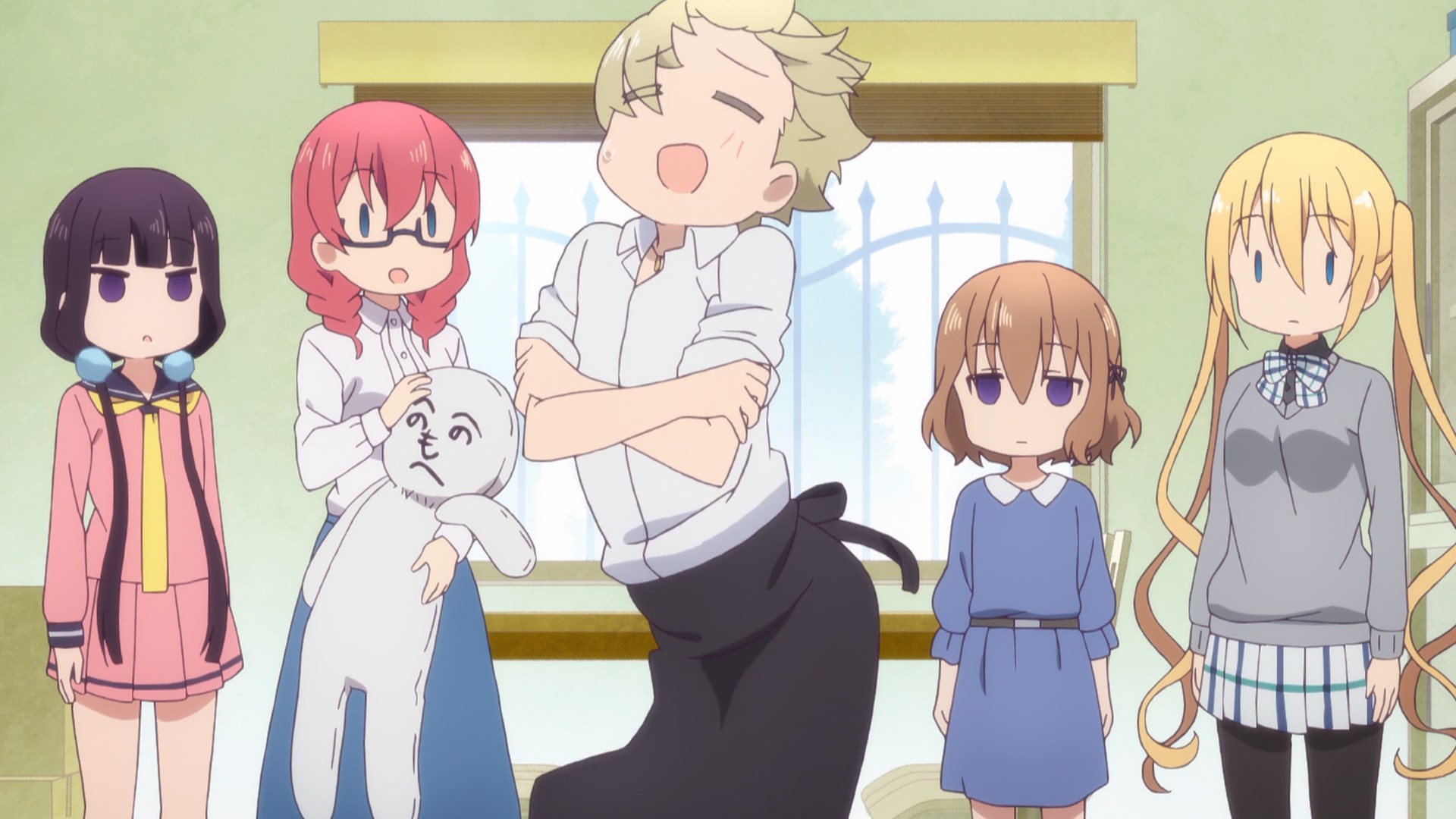 Or, quite possibly, it's because this anime is simply funny as hell! Episodes involving the staff trying to raise Maika's sadistic tendencies or Dino trying (and failing) to go on a surprise date with our heroine are chock-filled with some of the most laugh-out-loud moments you'll see this fall season. Even character intros involve some big knee-slapping laughs, with Miu entering the foray after the staff finds a hentai comic left by a customer. (Maika's reaction to the XXX-rated material is both innocent and hilarious.) Hideri's grand entrance keeps the dragging truth quiet until the time is right, with the end resulting in the poor sap being tricked into wearing Mafuyu's old cosplay and elementary school clothes.

The running gags presented throughout BLEND-S never run their course, with Dino's love towards dark-haired Japanese girls being one of those wake-up call laughs for those who often fetishize the country's female population. Watching as the girls often break character on the job also lead to some good chuckles, especially when the customers call them out on their mistakes. Of course it's the adorable way Dino and Maika become closer friends, with some staff jokingly wanting to call the cops on the blonde Italian (what with their ten-year age difference) and some drawing inspiration from their bantering for future fan comics. All of this, of course, presented in good fun that never reaches an uncomfortably creepy place that some anime comedies unintentionally tread through. 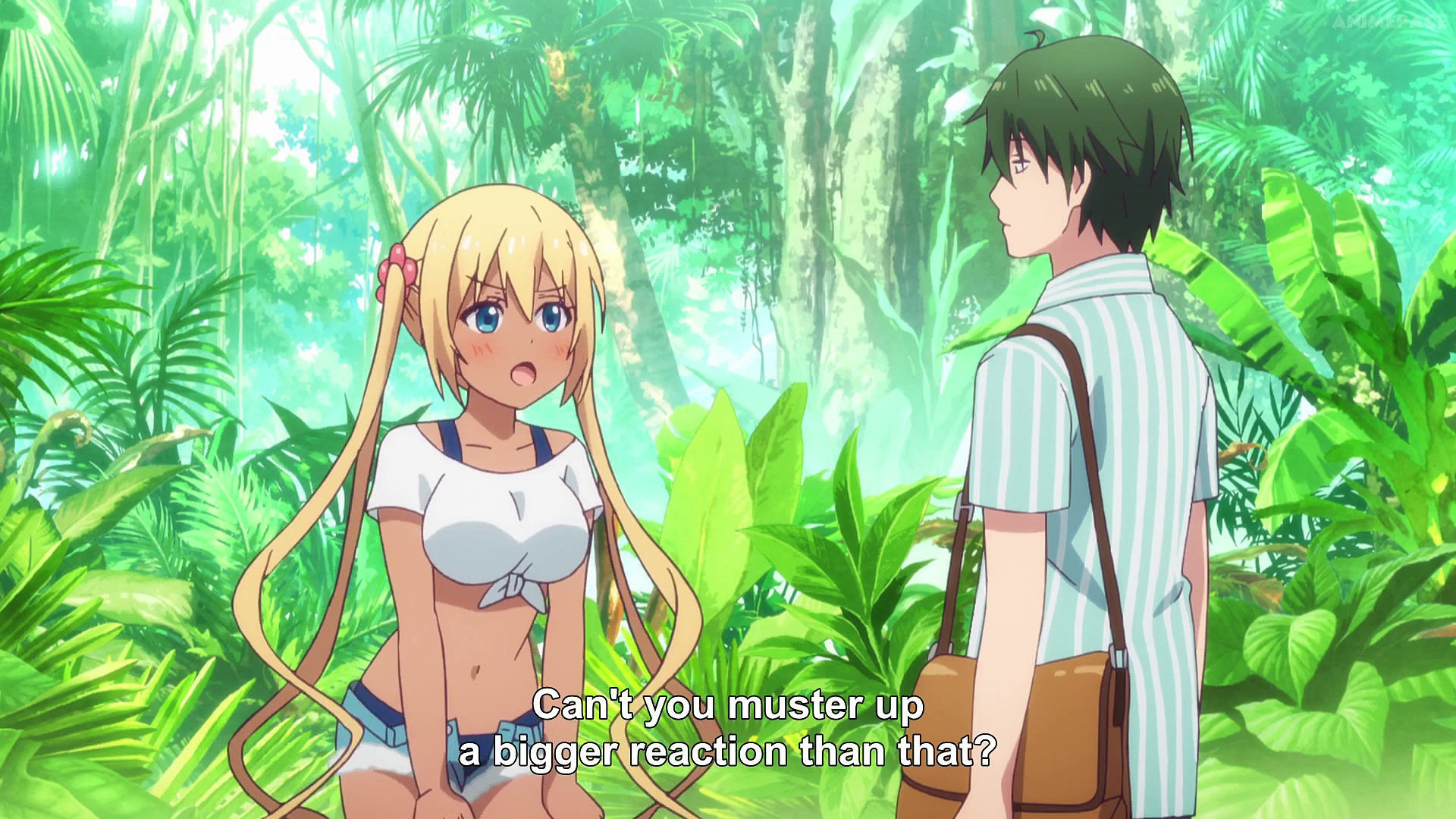 What helps to push these jokes to a high level is certainly the performances from the anime's voice cast. Waki showcases both a sweetness and heartfelt attitude as Maika, pushing the sadist elements when the time calls for it to bring forth the show's biggest laughs. Maeno may lack the Italian accent as Dino, but his personality shines through his character that bumps his gags up the right amount. Haruno's Mafuyu switches between the aged college student and little sister persona with perfection, resulting in some cutesy silliness that'll easily make her a fan favorite. Tokui takes a page from her "Nico-Nico-Ni!" Love Live! days in her role of Hideri, pushing the idol-like mannerisms and cynicisms to great parodic levels.

A-1 Pictures (Interviews With Monster Girls, Black Butler) once again showcases their animation craft with bright colors filling the vivid worlds of BLEND-S. What's on the menu may not rival the dishes of Food Wars!, but they still look delicious to the eyes. As for the characters themselves, they each convey a unique personality that keeps one from being a cookie-cutter version of another person. Visual gags are brought to life with a goofy cartoonish attitude that makes it hard not to grin when executed properly. 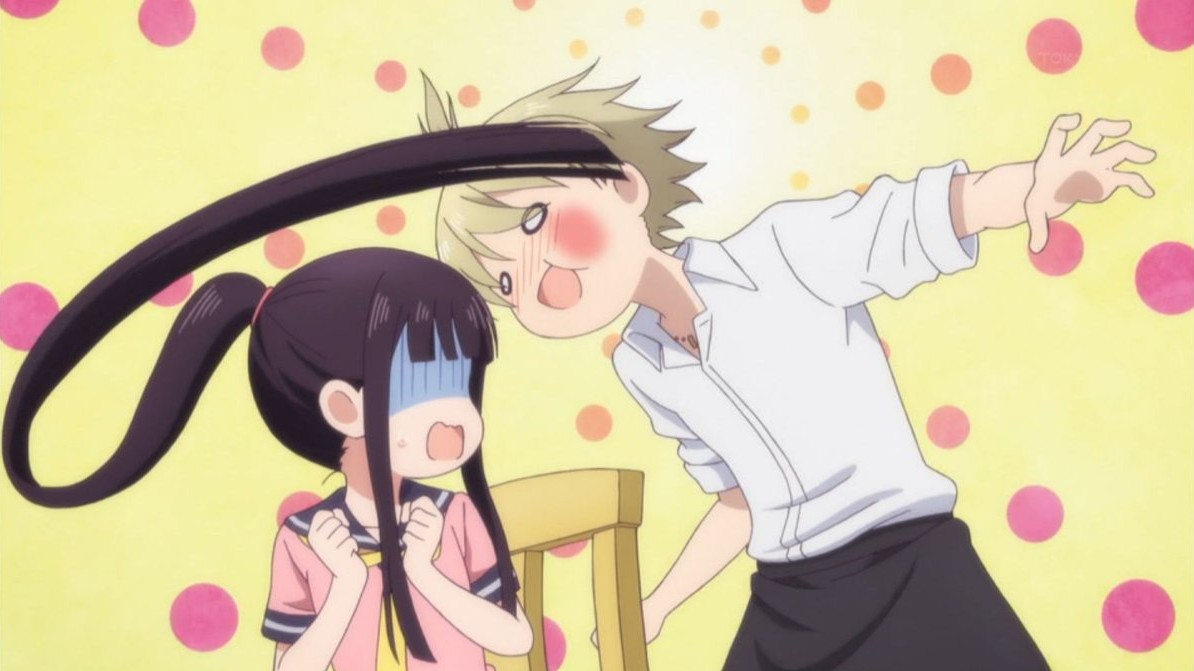 Composer Tomoki Kikuya (Eromanga Sensei, Pani Poni Dash) conjures up a wondrous soundtrack that blends wonderfully with the world in and out of Café Stile. One cannot help but feel a sort of joy when hearing the sugary sounds Kikuya has cooked up for the stories being told. The main cast of the anime -- under the guise of Blend A -- perform one of this year's catchiest theme songs, the opening appropriately titled "Bon Appétit S." It's a show-stopping melody that's worthy of any Broadway stage, even putting to shame any song from Waitress: The Musical. Ending theme "Detarame na Minus to Plus ni Okeru Blend Kō" is a dreamscape of a track, although it does lack that one-two-punch that the opener clearly has going for it.

BLEND-S is a magnitude of hilarity, adorability, and well-crafted storytelling that a show like this rarely ever delivers. Silly, cute, and surprisingly warmhearted, the staff of Café Stile serve up this year's most out-of-nowhere delicacy of laugh-inducing sweetness this side of the restaurant industry. Be it delivered by a sadist, sister, tsundere, or idol trap, BLEND-S offers what may very well be this fall's best comedic treat. Just be sure to tip generously...

BLEND-S can be viewed on Crunchyroll and VRV, and has been licensed by Aniplex of America. Episodes 1-8 were observed for this review. Promotional consideration provided by Crunchyroll.

Background Noise: Ash & Ice by The Kills - Fun fact: Like Maika and Dino, the duo of Alison Mosshart and Jamie Hince share a ten-year age gap between the two of them. Of course that's not the reason why their 2016 album found itself blaring while this review was being taught. Instead it's the personalities of Maika and Mosshart that share common ground, with them being warm & kind off the clock and purely sadistic in front of their audience. Their recent record goes more bare-bones than even their earlier material, with cuts like "Hard Habit To Break," "Siberian Nights," and "Impossible Tracks" licking you clean while making you feel dirty in all the right places.

GAME REVIEW | Getting Lost in the...

GAME REVIEW | Ridding The Undead I...