ANIME REVIEW | Well-Done Laughs on the Menu in "WWW.WAGNARIA!!" 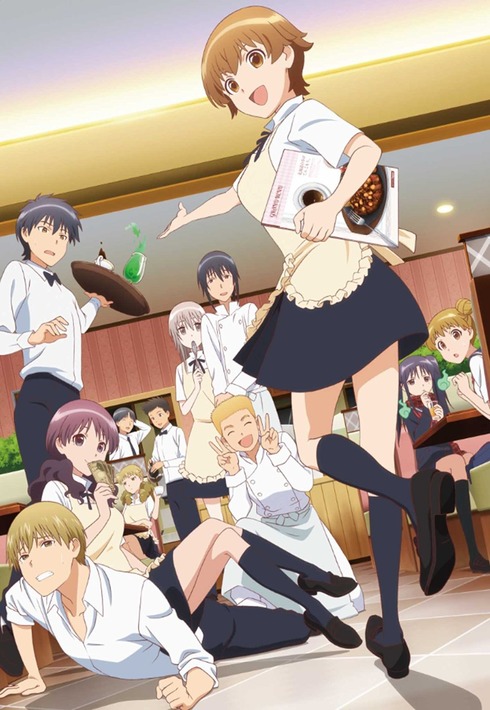 ANIME REVIEW | Well-Done Laughs on the Menu in "WWW.WAGNARIA!!"

First off, take a sigh of relief, as you don't need to know anything about the Wagnaria!!/Working!! franchise before jumping into WWW.WAGNARIA!!. Even if you've never seen a single episode of the past incarnation, you won't feel lost at all when it comes to watching this spin-off. (Sōta Takanashi and the rest of the original cast aren't even in this version, so don't worry about figuring out who is who.) With that being said, even if you're new to the franchise like I am, it's easy to see why so many people love the misadventures under the roof of Wagnaria.

For starters, there's no real coherent plot in the show, other than the day-to-day tasks that the wait staff go through on a daily basis. There are little tidbits and back stories regarding how and why everyone has found themselves taking orders and flipping burgers at the joint, but for the most part it's just a gathering of totally different individuals who just so happened to have some screwed up aspect within their personality or life situation. The real draw to WWW.WAGNARIA!! is its means of throwing these workers into various situations and seeing what happens. 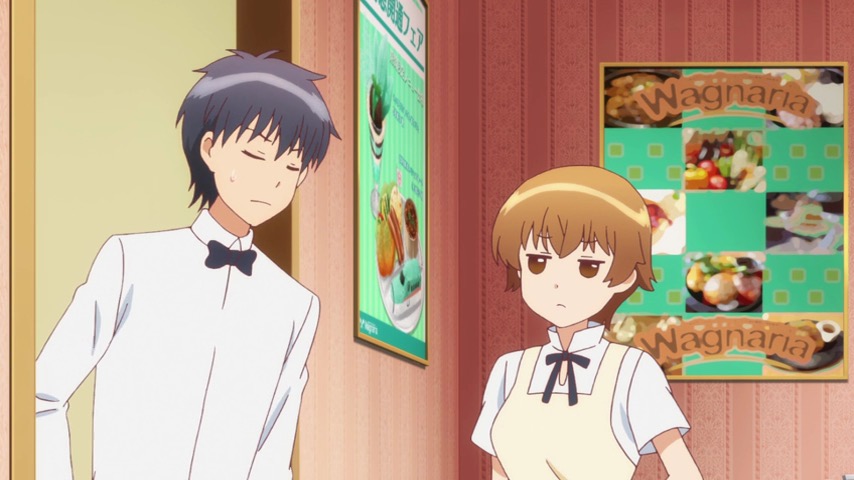 These personalities clash in some very fun ways for the most part. Main focus Daisuke Higashida (Yūichi Nakamura) finds himself having to take a restaurant job after his father's business goes bankrupt, often placing him alongside the ditzy Hana Miyakoshi (Haruka Tomatsu). Rich girl Shiho Kamakura (Sora Amamiya) taunts Yūta Shindō (Kenshō Ono), whose father is in debt to her family's company. For the show's real quirkiness, waitress Sayuri Muranushi (Yōko Hikasa) has the ability to serve dead customers, as she was raised in a family of exorcists.

WWW.WAGNARIA!! is heavily an ensemble anime comedy, one where a lot happens to the patrons and waitstaff in each episode. Often, two characters find themselves being paired up, with the task of "straight man" and "stooge" being switched around when appropriate. In some cases, a third will get involved (mostly Nana Mizuki's character Kisaki Kondō, whom often has her baby daughter in tow), which pushes the humorous misunderstandings just a little bit further. In the long run, it simply is pushing most of these pairings to possibly start dating (as it has seemingly happened with the reluctant Daisuke and the excited Hana). 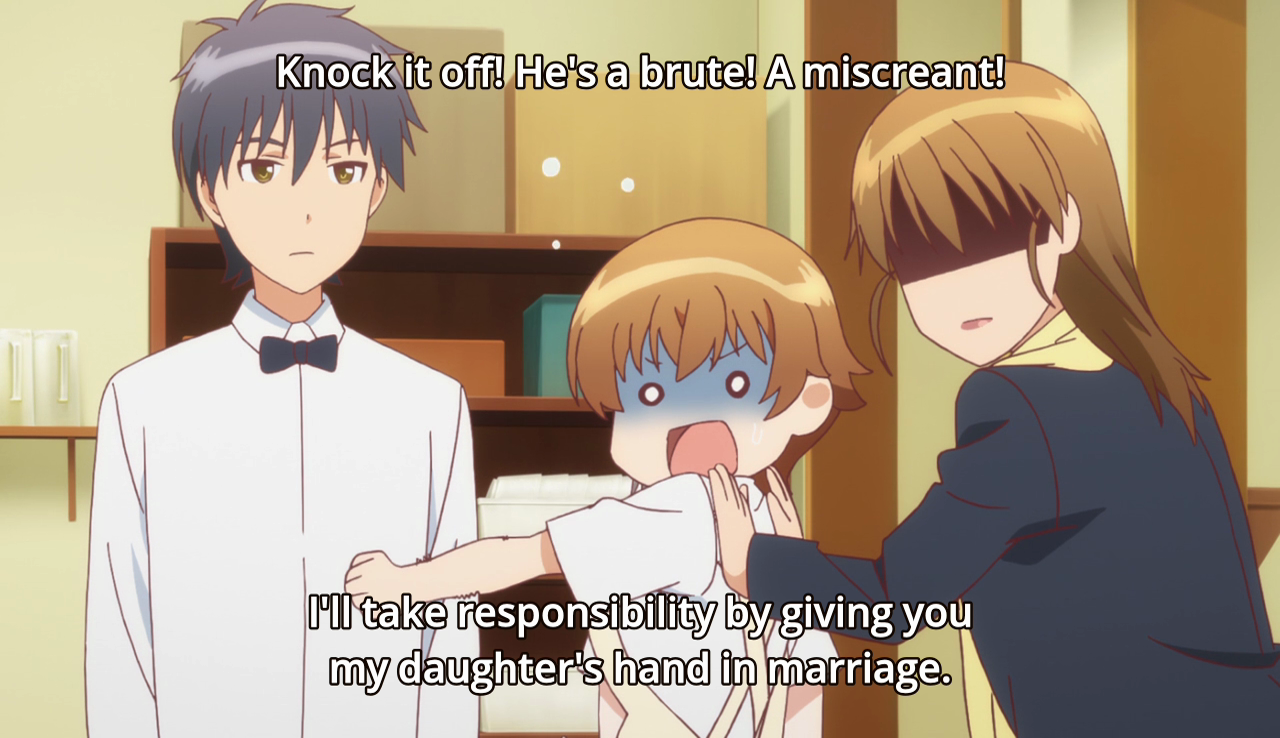 The reason why the Wagnaria!!/Working!! franchise has seen much success is its presentation of the relatable main protagonist. Here, Daisuke has his arm pulled to get a job, only to find himself surrounded constantly by the least normal people he's ever witnessed. The staff, the customers, and even familiar faces and classmates often invade his space to mostly make his job a lot harder than it should be. He's got a certain Dante Hicks vibe when he looks at the world around him, with Hana as the cute Randall Graves that pokes all the wrong buttons constantly.

It's when they're tossed into various scenarios when WWW.WAGNARIA!! often shows its strong suit. Seeing Hana failing on her chocolate skills and sending Daisuke close to Heaven never gets old, especially when he chats with Saint Valentine (Hideyuki Umezu) about the power of Love & Peace. Having to do a scare challenge or reluctantly adopting a raccoon cub also opens up the door to bringing the two closer together, although Daisuke is very reluctant to date the air-headed Hana. Even if there are concepts or jokes that might fall flat between the two of them, it nevertheless always seems to lead to a respectable punchline. 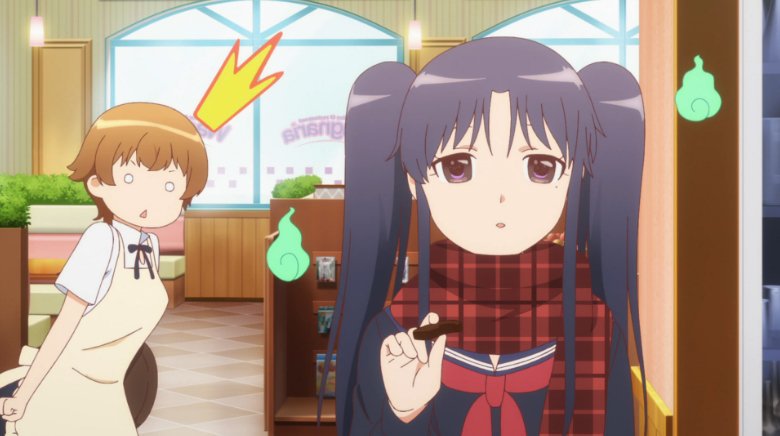 Of course, these two characters aren't the only focus of the show. Watching Shiho harass Yūta on a daily basis normally should be cruel, but it's later on when he comes back with an attitude that sends her to faint in front of her bodyguards that makes their dynamic surprisingly fun. Kisaki is a bullshit-proof wall, which makes having her butt in and squaring away any sort of kerfuffle often enjoyable. There's a sweetness to Sayuri's quiet demeanor, which gets all the more adorable when staff cook Masahiro (Kōki Uchiyama) and repeat customer Miri (Momo Asakura) enter the foray.

With this being an ensemble comedy, WWW.WAGNARIA!! puts a lot of weight on its voice actors & actresses. Fortunately, just about everyone gets the job done with some lively performances, especially from Nakamura's Daisuke and Tomatsu's Hana. However, it's Umezu's portrayal of Saint Valentine that often steals the show, as his tiny frame and peaceful mentality often clash with Daisuke and Hana's hot-headed attitudes whenever they nearly face a fate of death by chocolate. All in all, some very fun portrayals from everyone in the cast. 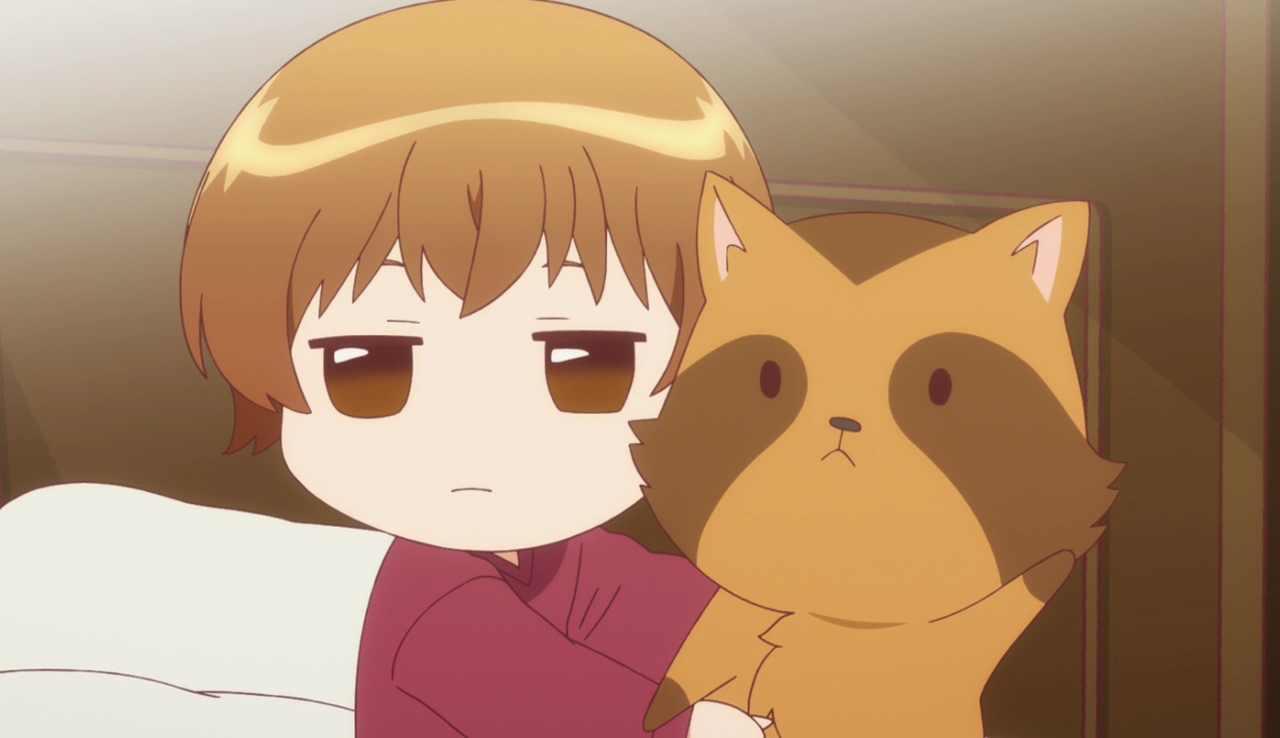 Continuing on with animating the franchise, A-1 Pictures (Black Butler, Erased) does a fairly decent job with propping the surroundings of the characters. The Wagnaria restaurant looks colorful, and the outdoor areas appear to be lively. However, I cannot help but think the character designs look rather off in some places. It's not that they look bad, but often, everyone looks a bit plain-faced without the same amount of visual personality that their mental ones.

Composer Masaru Yokoyama (Mobile Suit Gundam: Iron-Blooded Orphans, Arakawa Under the Bridge) does a fairly decent job with the show's soundtrack, but -- unlike his work in Your Lie in April -- lacks the memorability that'll make anyone perk up and notice it outside the anime. Meanwhile, opening theme "Eyecatch! Too Much!" by Tomatsu, Hikasa, & Amamiya is straight-up adorable, to the point where you'll definitely be humming it days after watching the latest episode. Closer "Mujūryoku Fever" by Ono, Uchiyama, & Nakamura is also a noteworthy song, although its usage of synthesized horns instead of the real thing makes it a little wincing on this reviewer's ears at times.

WWW.WAGNARIA!! is a fun show about the lack of fun in the work place. While its humor doesn't work all the time, the punchlines and jabs it often delivers at the expense of the characters makes it easy to find something to laugh about. Charming and often snarky, the wait staff of Wagnaria make every visit to their restaurant even just a little more memorable. At the very least, I expect a positive Yelp review from past patrons if they often deal with these funny folks of WWW.WAGNARIA!!.

WWW.WAGNARIA!! can be viewed on Crunchyroll and Daisuki.net, and has been licensed by Aniplex of America. Episodes 1-11 were observed for this review. Promotional consideration provided by Crunchyroll.