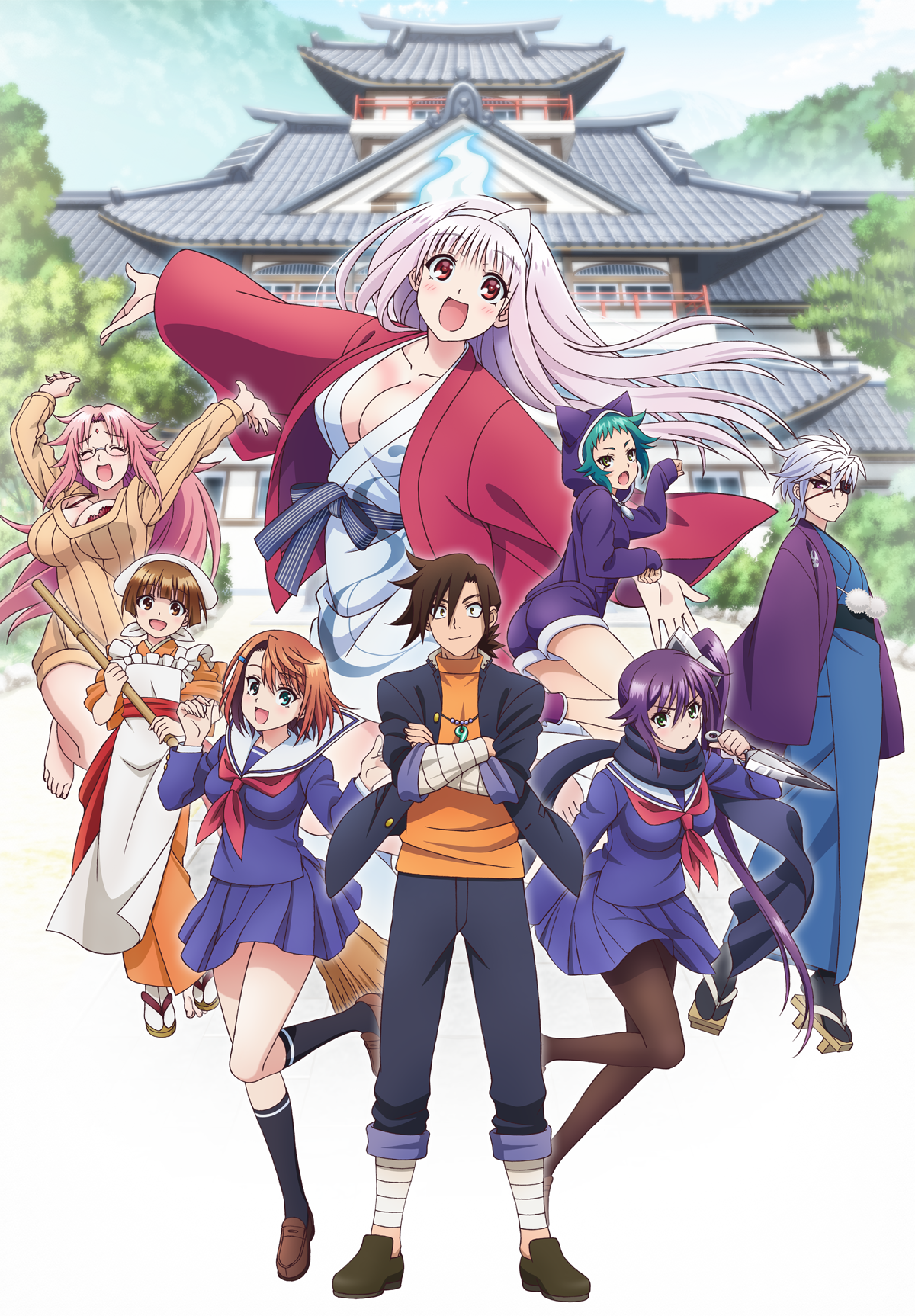 Harem comedies can be hit-or-miss, and it usually falls on the shoulders of its protagonist on whether or not it'll be good. Series like Tenchi Muyo! and Nagasarete Airantou had their male main characters being reluctant to the girls' charms, whereas shows like High School DxD and Heaven's Lost Property relished on having their guys being perverted to the max. So it's nice when you get a harem where our main male focal point is not just an upstanding individual, but he also does well to protect those he cares deeply about. This is demonstrated well with this summer's Yuuna and the Haunted Hot Springs, an adaptation of Tadahiro Miura's popular Weekly Shonen Jump manga series.

The series puts the main spotlight on Kogarashi (Yūki Ono), a psychic who can exorcise ghosts with a mere punch. After entering a new town, he is given the chance to live on the cheap at the Yuragi Inn. However, Kogarashi soon discovers why it was so cheap: many years back, a body was discovered, and its ghost now haunts the vicinity. That ghost just so happens to be Yuuna (Miyuri Shimabukuro), a ditzy spirit who winds up being more clingy than scary. After various misunderstandings, Kogarashi decides to help Yuuna with her unfinished business, giving her the chance to finally pass on towards the next life. 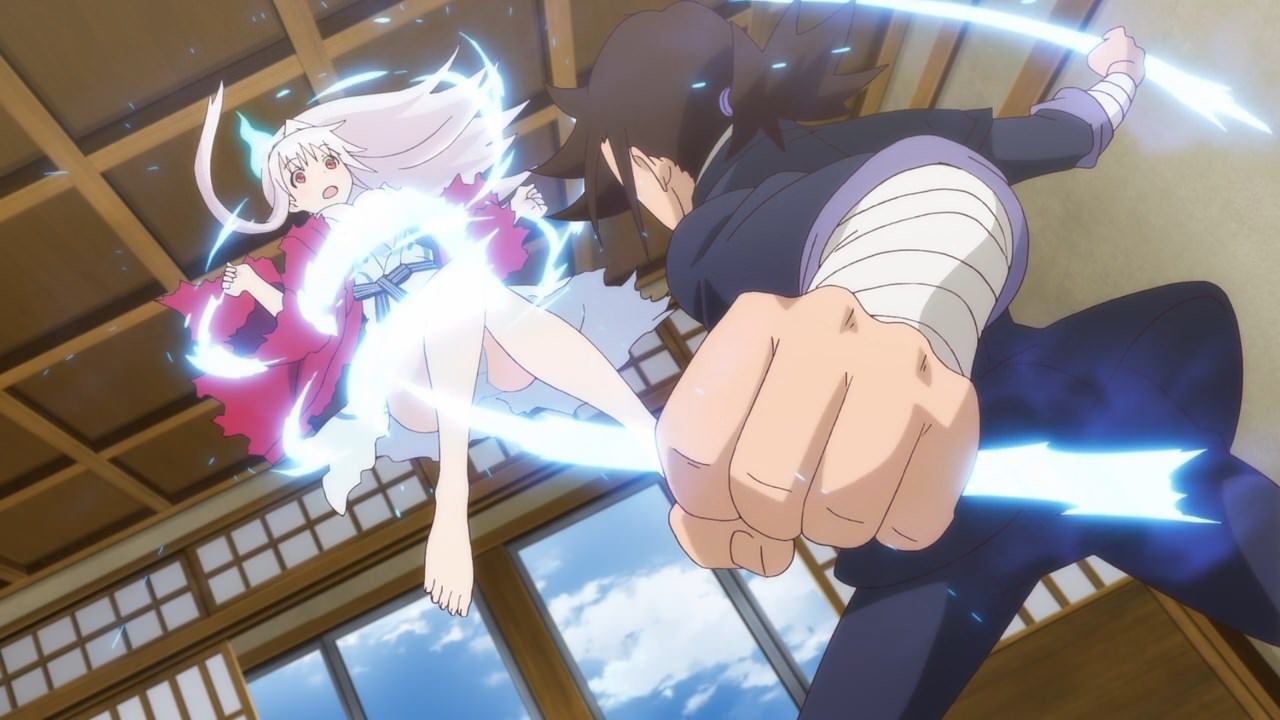 Of course, the other girls of the Yuragi Inn don't exactly help with making Kogarashi's life easier. Ninja girl Sagiri (Rie Takahashi) is hesitant to have the boy under the same roof as her, but slowly warms up to the idea after he becomes helpful in some of her missions. The cat vessel-carrying Yaya (Yui Ogura) is coy at first, but good food easily keeps her on Kogarashi's good side. Manga author and ogre Nonko (Ai Kakuma) often gets herself intoxicated, resulting in her going sans clothes while becoming powerful strength-wise. It's only the inn caretaker Chitose (Sayaka Harada) that automatically welcomes Kogarashi with open arms, with her ability to change people's fortunes on a dime becoming beneficial to those close to her.

With all these different women of skill and spiritual power under one roof, one would think that Yuuna and the Haunted Hot Springs would be overfilled with super-powered tales and crazy antics. While the latter aspect may be true, it's somewhat surprising to see the supernatural aesthetics of the story take a back set most of the time. Besides Yuuna, most of the girls are almost always presented in a very normal light, a polar opposite of what Monster Musume did. Instead, this series places a focus on how these girls blend into their surroundings without causing much of a fuss. 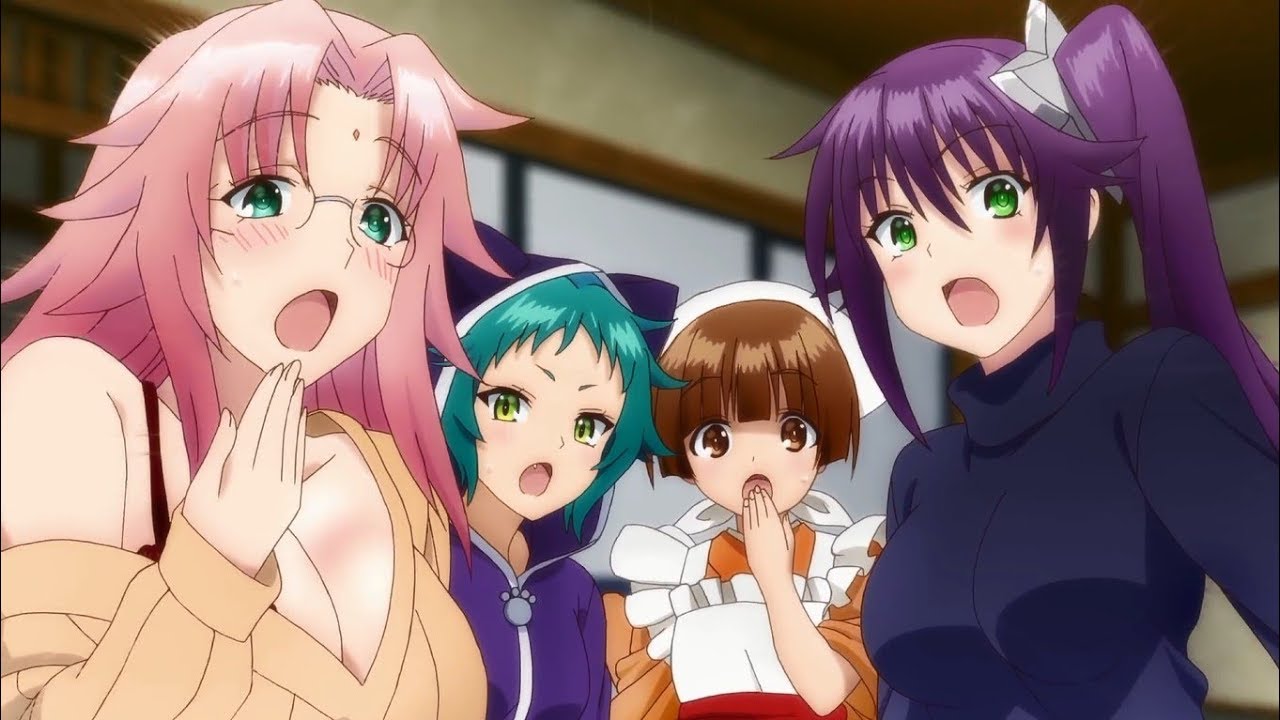 A great example of this is when you see Chitose going to middle school. Although she's hundreds of years old, she can easily blend in with all the students. As such, she enjoys her time with kids seemingly her own age while attempting to have some sort of normal life. The same can be said about Sagiri, who somewhat wishes to be treated as an average girl despite her carrying a bad reputation. With the aid of Kogarashi and fellow student Chisaki (Eri Suzuki), she's given the chance to come out of her shell more and be seen in the light of which she desires most to shine on her.

Considering Yuuna's situation, she has more trouble blending in than anyone. Having to deal with sharing a room with Kogarashi doesn't make it any easier, as she has the habit of getting naked and wrapping herself around the poor guy like he's a hug pillow. It also doesn't help that she wakes up like this and proceeds to throw a ghost tantrum, causing everything in the room (including Kogarashi) to be tossed into the nearby river bend. However, by speaking with Chisaki via pen & paper, Yuuna learns how to be a better woman despite some of her shortcomings. 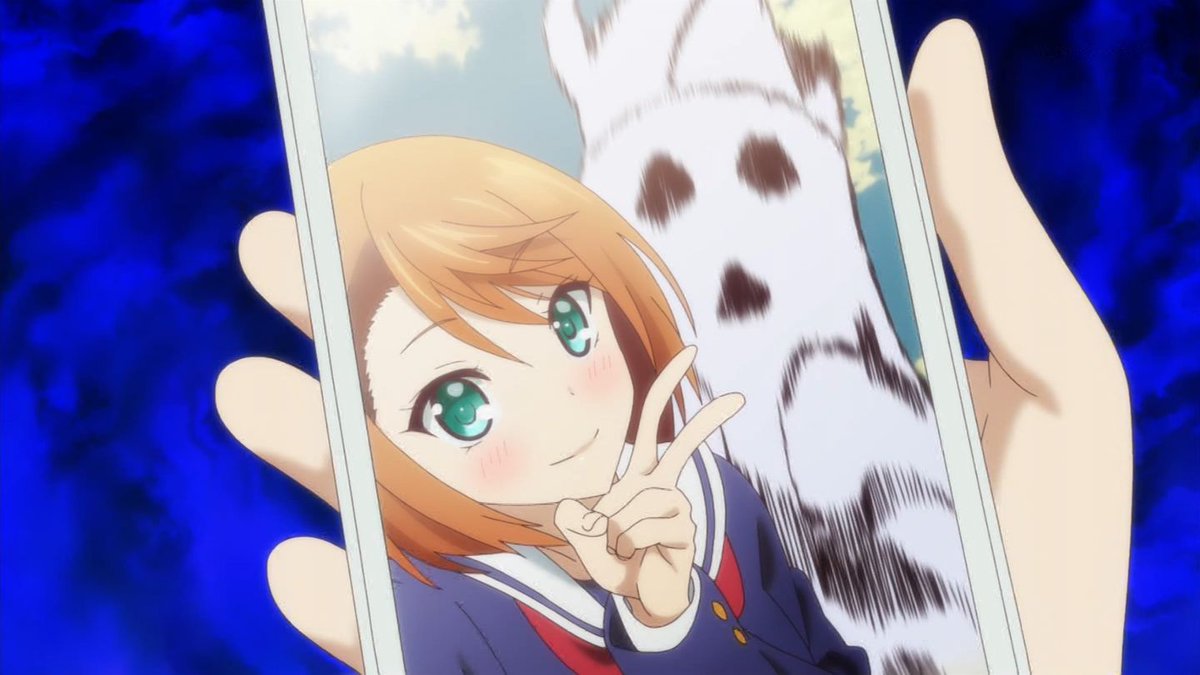 All of this is presented in Yuuna and the Haunted Hot Springs with a plethora of humor and misunderstandings. While there have been many a harem comedy that has relied on boob flashings and hands accidentally going on places they don't belong, this series actually tries its best to not be about that. Sure, there's quite a lot of nudity thrown around, and jokes about one's manhood are tossed in too, but this anime doesn't just want to focus on that. Instead, you actually get stories about characters maturing and opening up to people they were initially cold to in the beginning.

With that being said, there are rules about certain characters that seem to get broken from time-to-time. Since Yuuna is bound to Yuragi Inn, she will reappear back in her room the next morning, even if she's far from the area. In an arc where she gets kidnapped by the Black Dragon God Ryuuga (Yoshimasa Hosoya) and his half-sister Oboro (Mikako Komatsu), this fact never gets touched on when Kogarashi and the others race to save her from an impending marriage. Plot holes like this make it kind of hard to take what's being delivered at a worthy measure, thereby taking away any sort of urgency that may add some tension to the overall story. 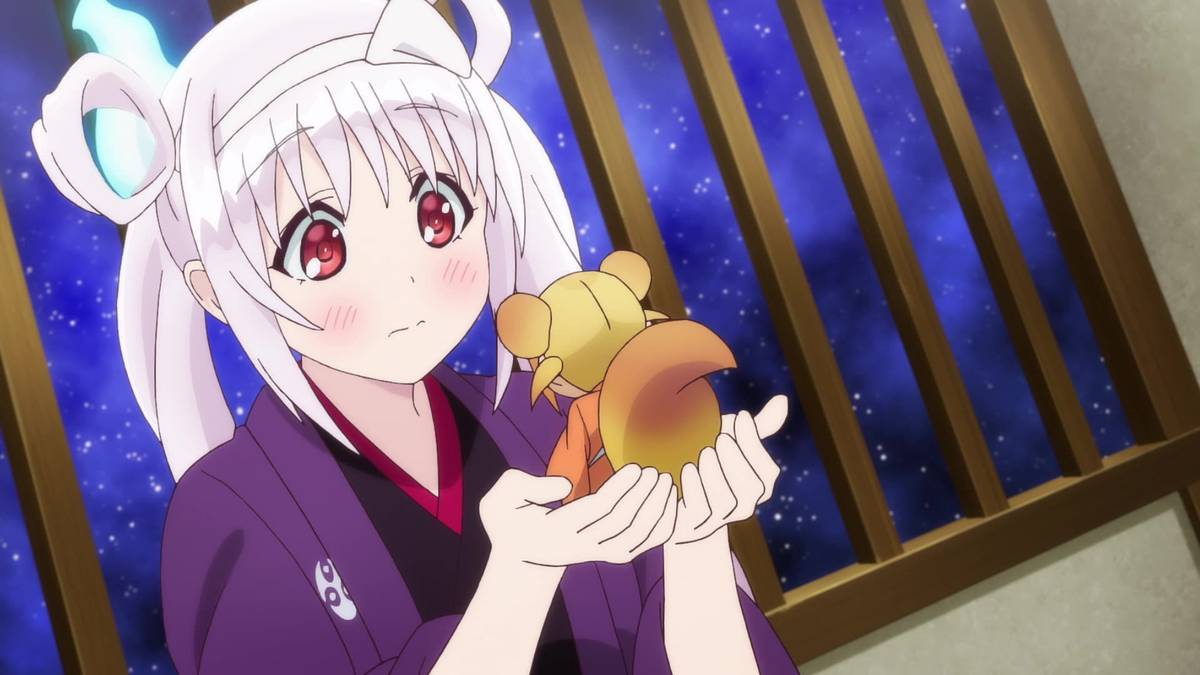 Or maybe I'm just looking too deeply into a show that's more about cute girls and the reluctant guy that now resides with them. After all, Yuuna and the Haunted Hot Springs is more about being fun with their characters than placing them in any danger. Watching Kogarashi and Yuuna go to an amusement park results in some strong perceptive humor, with the onlookers and staff seeing just a guy on a "date" with himself and not a legit invisible specter. A story about Yaya finally getting close to Kogarashi is also played for big laughs, as her feline mannerisms make it seem like she's being lovey-dovey instead of the simple wanting of food from the guy.

The voice cast for this series delivers a lot of surprisingly good performances, be it both in serious and comedic tone. Ono's Kogarashi has a very Everyman side to his voice, only getting rough when the time comes to protect his friends. Shimabukuro's Yuuna is all kinds of cute and ditzy, with her sillier retorts being saved when being embarrassed or flustered. As the voice of Yaya, Ogura delivers a coy mannerism that blends feline laziness with a child-like curiosity. Surprisingly, it's Takahashi's performance as Sagiri that doesn't go all the way in with the comedy, instead coming off more stern in her vocal work. While that's not a bad thing per se (it fits with her character), it's somewhat strange to hear her play a character without a bubbly kind of personality latched onto her well-being. 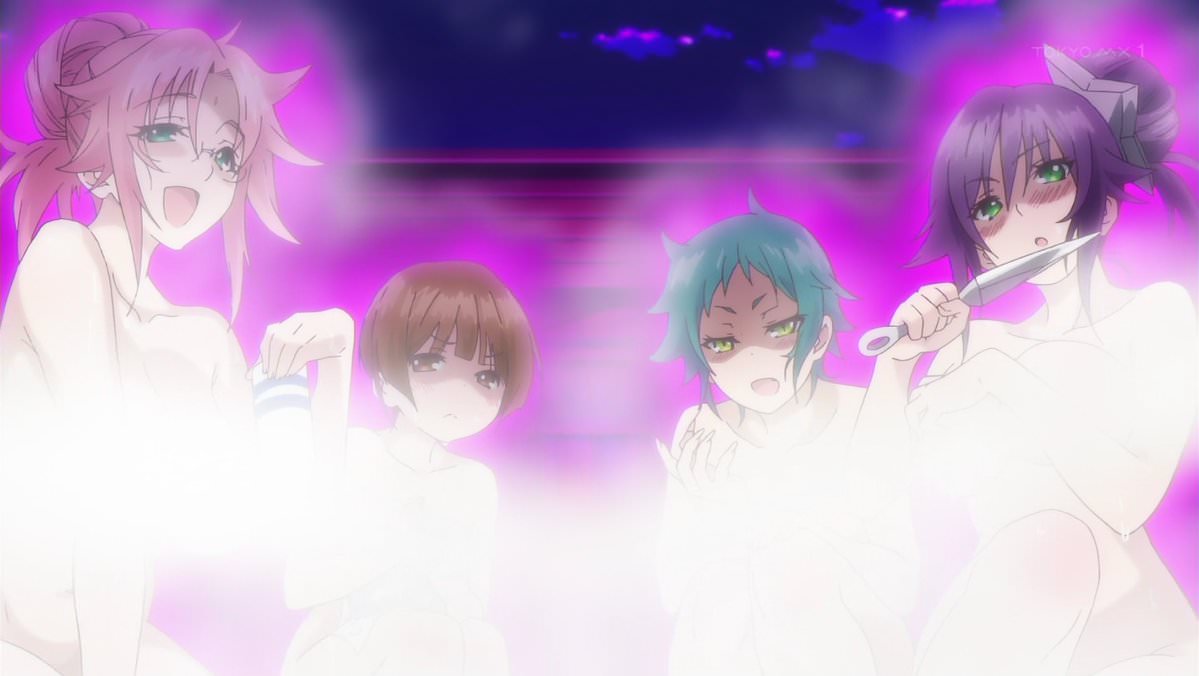 XEBEC has a strong record when it comes to harem comedies, thanks to their work on Love Hina and To Love-Ru. While the characters and settings look nice and cute, it's apparent right from the get-go that they're attempting to use any means of censorship to make viewers buy the Blu-Rays when they go on sale. As such, scenes with promiscuous activity and even the hot springs parts are filled to the brim with fog and magic rays of light. Because of this, it makes me think that this series would've been better off airing on a TV station that gets away with this sort of stuff. (OVAs have and will be coming out of this series in Japan, with everything uncensored.)

Tomoki Kikyua (Eromanga Sensei, Blend S) composes a soundtrack that surprisingly fits well with each situation thrown at these characters. With a good ebb and flow, his score can go from light-hearted to dark in a blink of an eye, something that works well with a series like this. Opening theme "Momoiro Typhoon" by Luna Haruna is cutesy pop fare, fitting with the more comedic tone of the series. While Luna's vocals are great, the music accompanying her does lack a certain amount of originality. Ending theme "Happen ~Kogarashi ni Fukarete~" by Suzuki, Shimabukuro, and Takahashi has a very romantic twang to it, feeling bouncy and heartfelt in all the right places.

Yuuna and the Haunted Hot Springs isn't a series for everyone to enjoy, but there's enough comedy and character development that will make it entertaining none the less. With its mixture of fun characters and interesting situations, this harem rom-com delivers some naughty silliness with a slice of warmheartedness. Although it may not be the strongest of its genre, Yuuna and the Haunted Hot Springs showcases just enough good times to warrant a returning stay each visit.