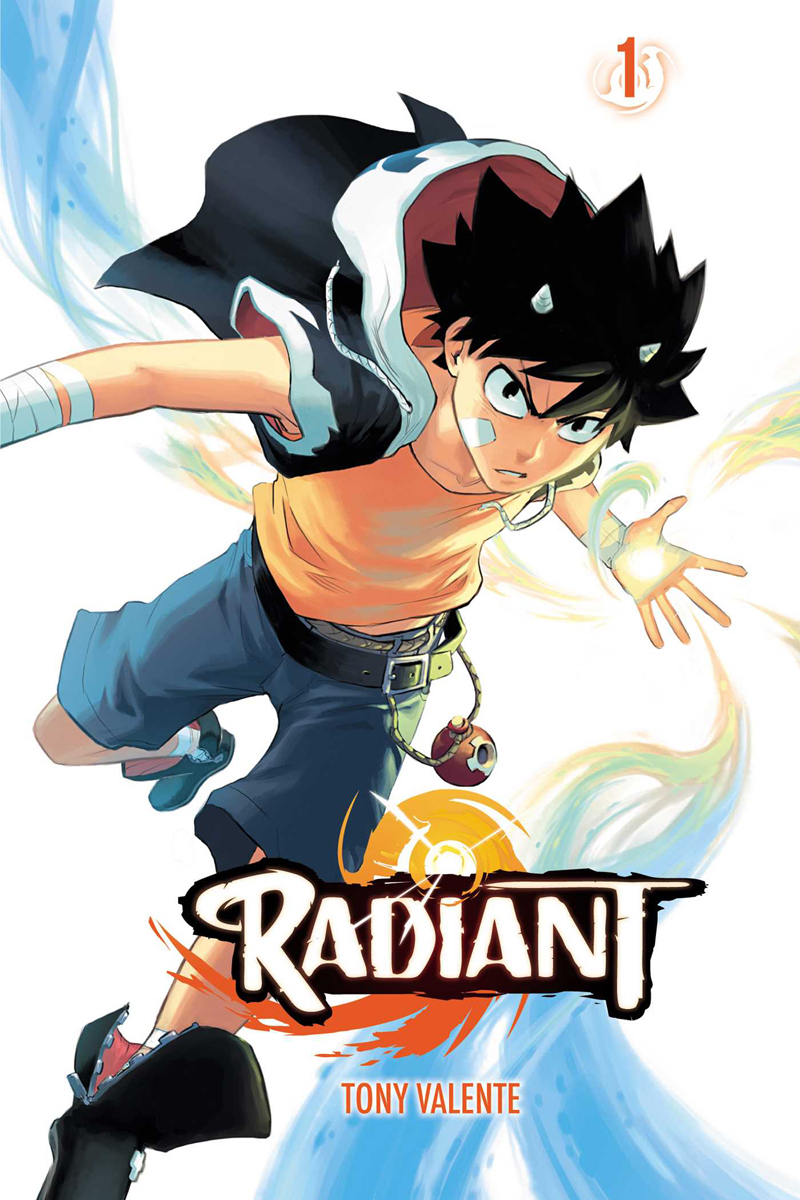 Japan and France are two countries whom I can almost always count on for delivering some fresh and fun stories and adventures. Be it the masterful guilds of Fairy Tail and the rise of a future Hokage in Naruto, to a hero finding his true self in Wakfu and a delivery boy in the midst of an insane government conspiracy in Mutafukaz, the tales spun out of both nations demonstrate the need to seek outside of the usual Western entertainment bubble for some genuine uniqueness. This October, both Japanese and French creators will be meeting together to craft what might be the next big shonen anime: RADIANT!

Just in time for that, VIZ Media has unleashed Tony Valente's original manga for the English-speaking world to read, one that will certainly prepare them for the animated adventures ahead. Taking place in a vast fantasy world, RADIANT puts the hero's cape around the horned boy Seth. With his inability to take control of his Wizard powers, the spiky-haired pipsqueak often finds himself building more trouble than keeping it at bay. As such, his caretaker Alma constantly punishes the boy for his screw-ups. However, when a beast known as a Nemeses appears -- and Alma doesn't believe him -- Seth runs off and attempts to save his village from total destruction. 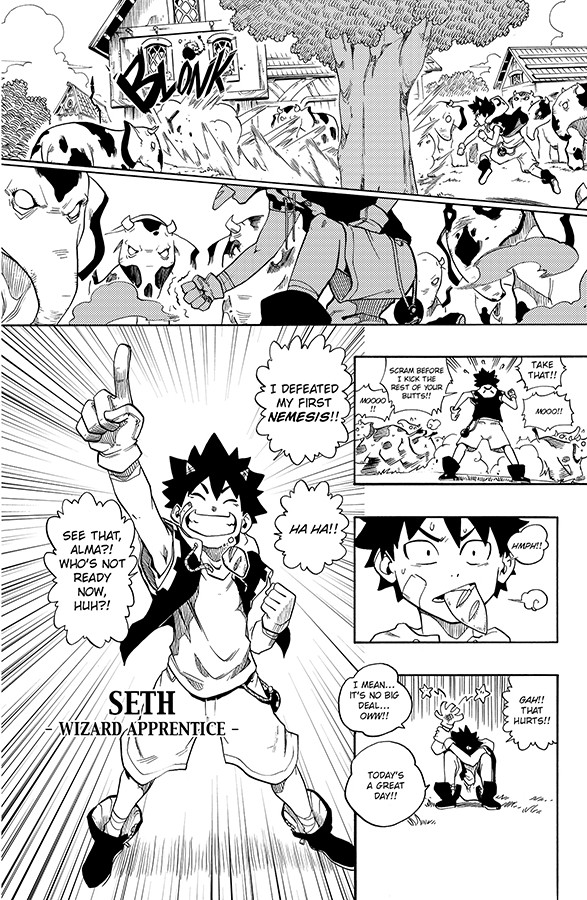 It's when he battles the behemoth when his true powers become apparent. What starts off as just a guy who doesn't know when to quit instead grows into a massive foray of both magic and might. As such, when he himself discovers his true strength, Alma decides that it's time for him to set off on one important journey: to find the Nemeses nest known as Radiant and destroy it! Of course, every adventurer needs a healthy crew, which includes a ditzy girl with a secret ill-tempered mannerism and a man whose sole task is to clean up after the biggest messes after a monstrous fight breaks out.

The pacing in the first chapter of RADIANT can be a little bit lengthy at times, even if its purpose is to shape the world it's taking place in. While it can be humorous seeing Seth and Alma bickering at one another due to the former's error in judgment, I can't help but feel like it's being dragged out a few panels too much. However, it's when the Bravery Quartet and the massive Nemeses egg they carry make their appearance when the pace is picked up significantly. As such, when Seth is ready to throw down, the action that takes place becomes a thrill to read through. 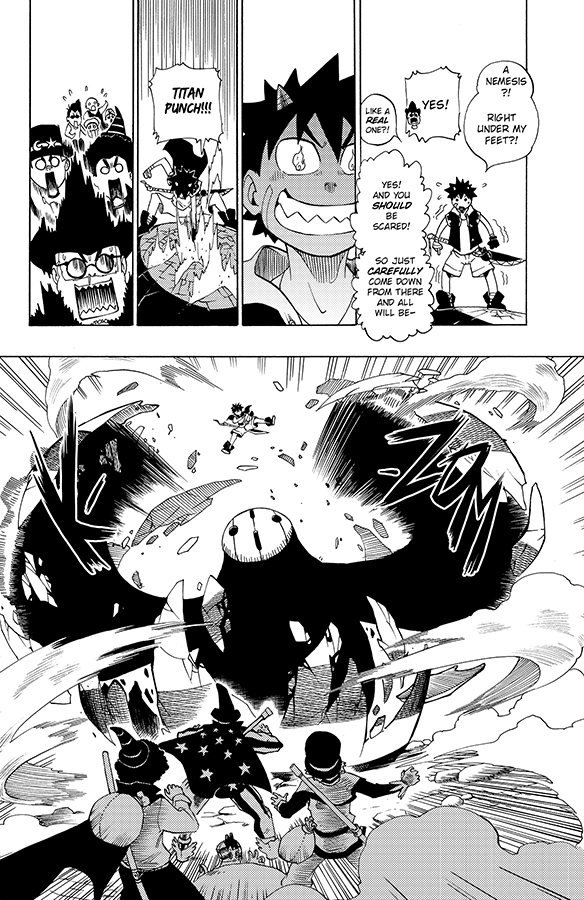 Watching as the horned Wizard both lay hits and take hits from the Angel-like creature is brought forth with such superb detail. The blows, the stabs, the captures, and even the final kill are presented with such heart-pounding personality that one can't help but be awed by its visuals. In his author introduction, Valente screams out "I want to make manga," and what he's able to conjure up is exactly that. It's not manga-like or manga-esque; it's a full-blown balls-to-the-wall Western-crafted manga with "bravitude" encompassing every panel.

Besides the art style, a big strength in RADIANT is its sense of humor. Very much in line with works like Wakfu and Fairy Tail, the presentation of the characters and their powers are almost always given a boost of silliness when the time comes for it. One great example of this is the introduction of his new comrade Mélie, who appears to be just your average dumb girl character. It's when her mean side comes out from within when you are greeted with one incredibly messed up personality, one that may remind Dragon Ball fans of a certain crazed lunatic from young Goku's journey. While his presence is short in this volume, the introduction of the yellow cat known as Master Lord Majesty is filled with a plethora of hilarity, especially when you see his contract-signing tactics overtaking many a sucker. 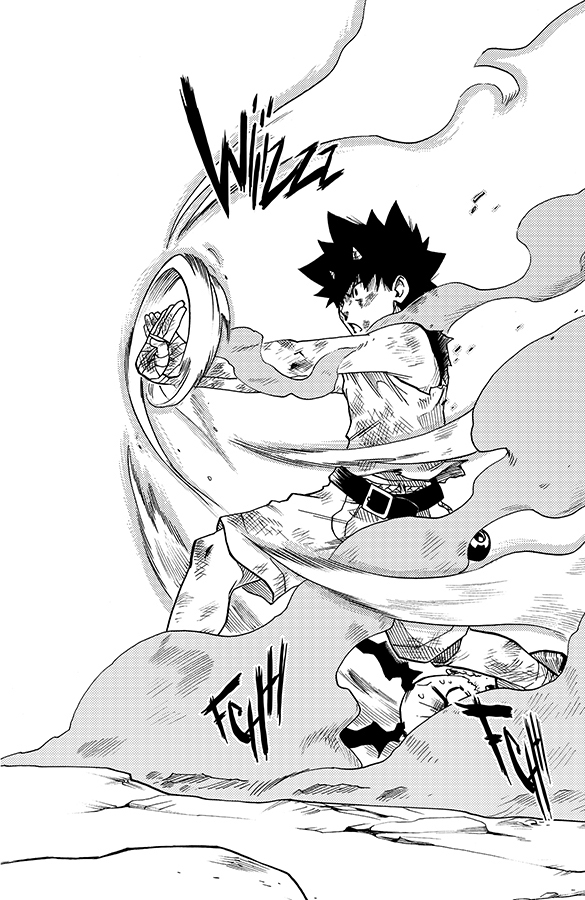 Right from the get-go, readers are also given a great dose of how this magic world works. From the way people look at Wizards to why normal people can't touch Nemeses, the means of how these elements are explained are presented in simple-yet-understandable details. It makes me wonder why Alma scorns Seth for not wearing any protection on his hands while dealing with these creatures. Will these interactions later cause Seth harm during the long run, or is there something else to why Wizards still need to wear the proper clothing before handing these monstrous beasts? (Here's hoping they'll explain this in due time.)

Even if it takes a bit for RADIANT's story to get going, the tale of Seth and his battle against Nemeses shows a whole load of promise. Its beautifully-drawn action and wonderfully comedic tone helps to showcase the massive world that the reader is being drawn into. Although it's fairly easy to compare RADIANT to such manga as Fairy Tail or The Seven Deadly Sins, the amount of originality that is placed in both the characters and its magic help to make it stand out from the rest of the pack. Needless to say, I am very much looking forward to Lerche's anime adaptation of this in a month's time!

GAME REVIEW | More To Worry About...

ANIME REVIEW | Getting Ghosted In...